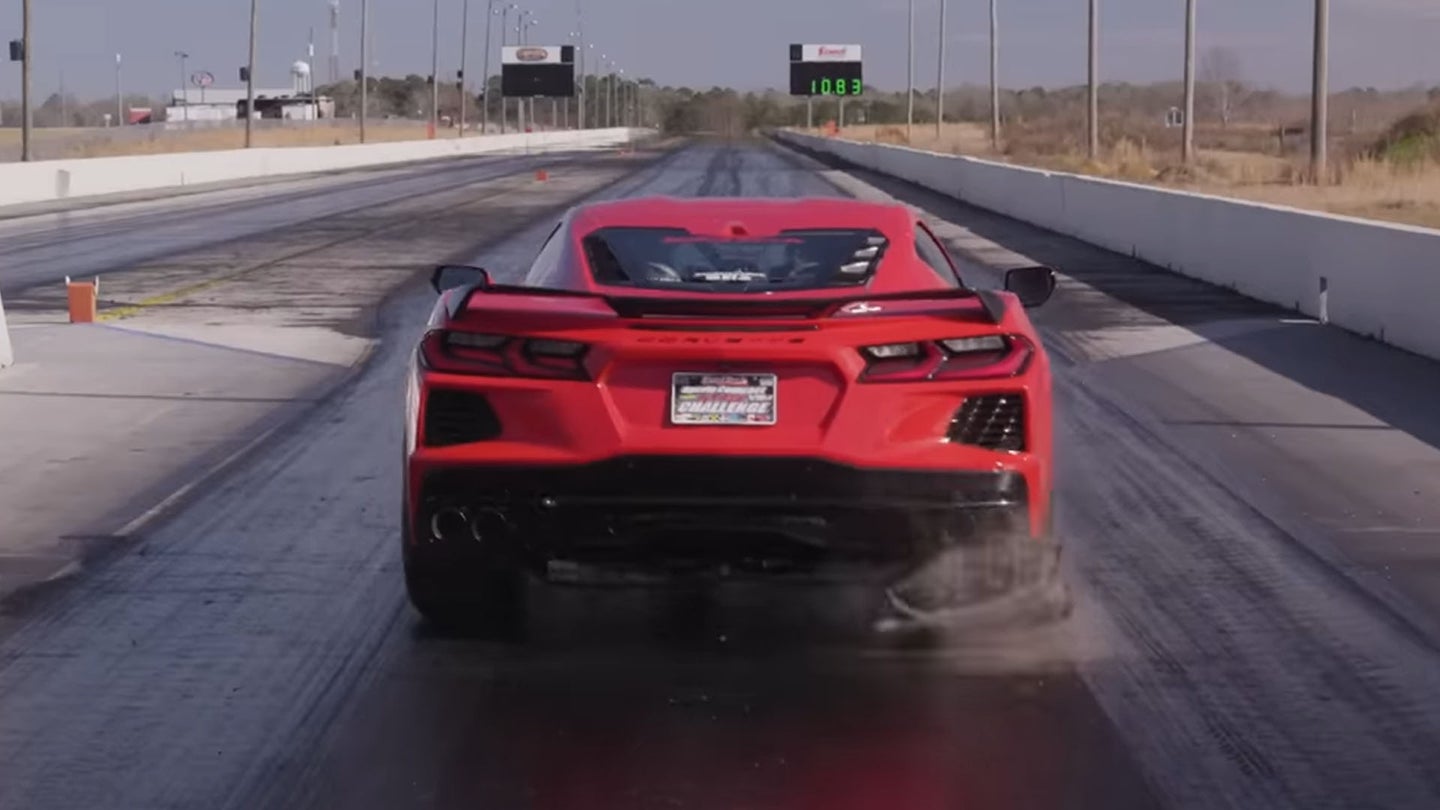 The Chevrolet Corvette C8, despite its unconventional engine layout, is turning out to be a seriously capable platform. Heck, some people have even turned them into submarines. The mid-engine V8 sports car can already launch to 60 mph in just under three seconds, however, tuners are pushing it even further. Fueltech, a company with its roots in drag racing, is one of the aftermarket wizards working its magic on the platform. It recently took its C8—which it claims is the world’s fastest—out on track to show off what it can do to YouTuber Rob Dahm. But while the runs were impressive, not everything went according to plan.

In this specific form, the dual-clutch-equipped ‘Vette churns out 1,350 horsepower from its 6.2-liter V8, thanks to twin-turbochargers and a piggyback ECU developed by Fueltech. It runs an 8.97-second pass in the quarter-mile at 160.92 mph. In the video below the results are slightly different only because Dahm and Fueltech’s Anderson Dick are running on the eighth-mile setup, but also because parts literally start falling off.

I shall be clear; it doesn’t break any driveline components or make a big oily mess on the track as the transaxle has been reinforced to handle the engine’s newfound power. It seems like the larger-diameter slick tire rubbed on the inner fender under heavy acceleration, ripping the assembly off along with a bunch of wiring for the ECU—specifically some stuff related to the transmission. As a result, the car gets stuck in first gear and the vehicle has to be hastily repaired in order to get a few more runs out of it. It does get one clean run with Dahm behind the wheel, though, and it’s very impressive.

Dahm, for the record, is no stranger to speed. The YouTuber is well-known for his four-rotor, all-wheel-drive Mazda RX-7 that has around 1,200 horsepower. Needless to say, it’s a seriously impressive build that makes some truly biblical noises.

Even if you’re not a fan of rotary engines, you can certainly enjoy this 1,350-hp beast, though. With not only a screaming Z06 on the way but also the first-ever AWD, hybrid Corvette coming too, things are only going to get more exciting.

The post 1,350-HP C8 Corvette Drag Car Launches So Hard It Rips Parts Off appeared first on The Drive.