1,973-HP Ford Pro Electric SuperVan Spied At The Nurburgring, Could Aim For A New Record 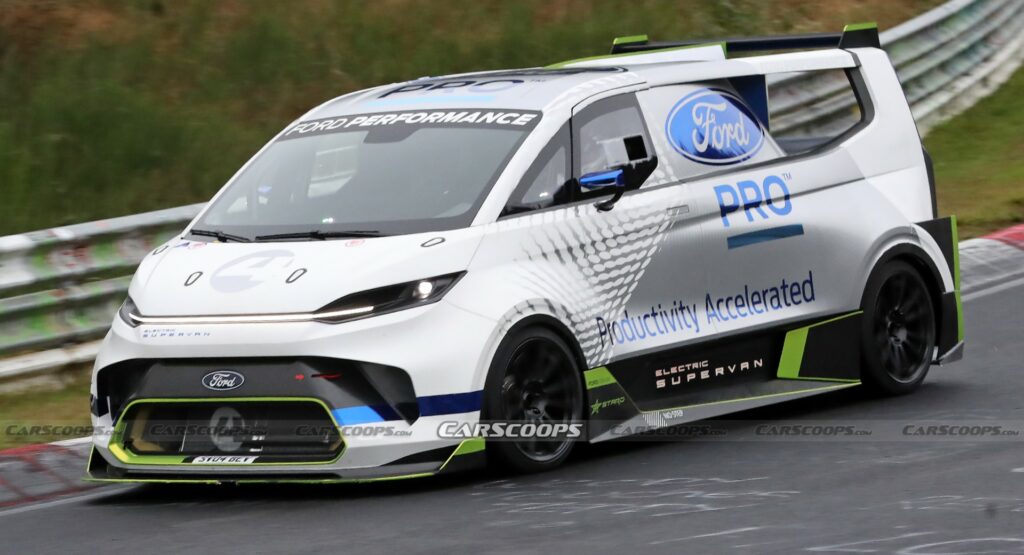 Remember the Ford Pro Electric Supervan that premiered in Goodwood a few months ago? Well, how could you forget a Transit-based beast with nearly 2,000 hp and motorsport-inspired aero and chassis setup? This unique vehicle might be a concept, but Ford took it to the Nürburgring for testing purposes, possibly hinting at a future track record attempt .

The Ford Pro Electric Supervan visited the Green Hell completely undisguised, joined by an EU-spec Ford Mustang Mach 1. Despite the difference in size, the 5.0-liter V8 of the pony car is no match for the immensely powerful quad electric motors of the van, making us wonder about the extent of the difference between them in a race. Note that the fastest-ever van by Ford can accelerate from 0-62 mph (0-100 km/h) in under 2 seconds, thanks to the combined output of 1,973 hp (1,471 kW / 2,000 PS) and the all-wheel-drive capability. 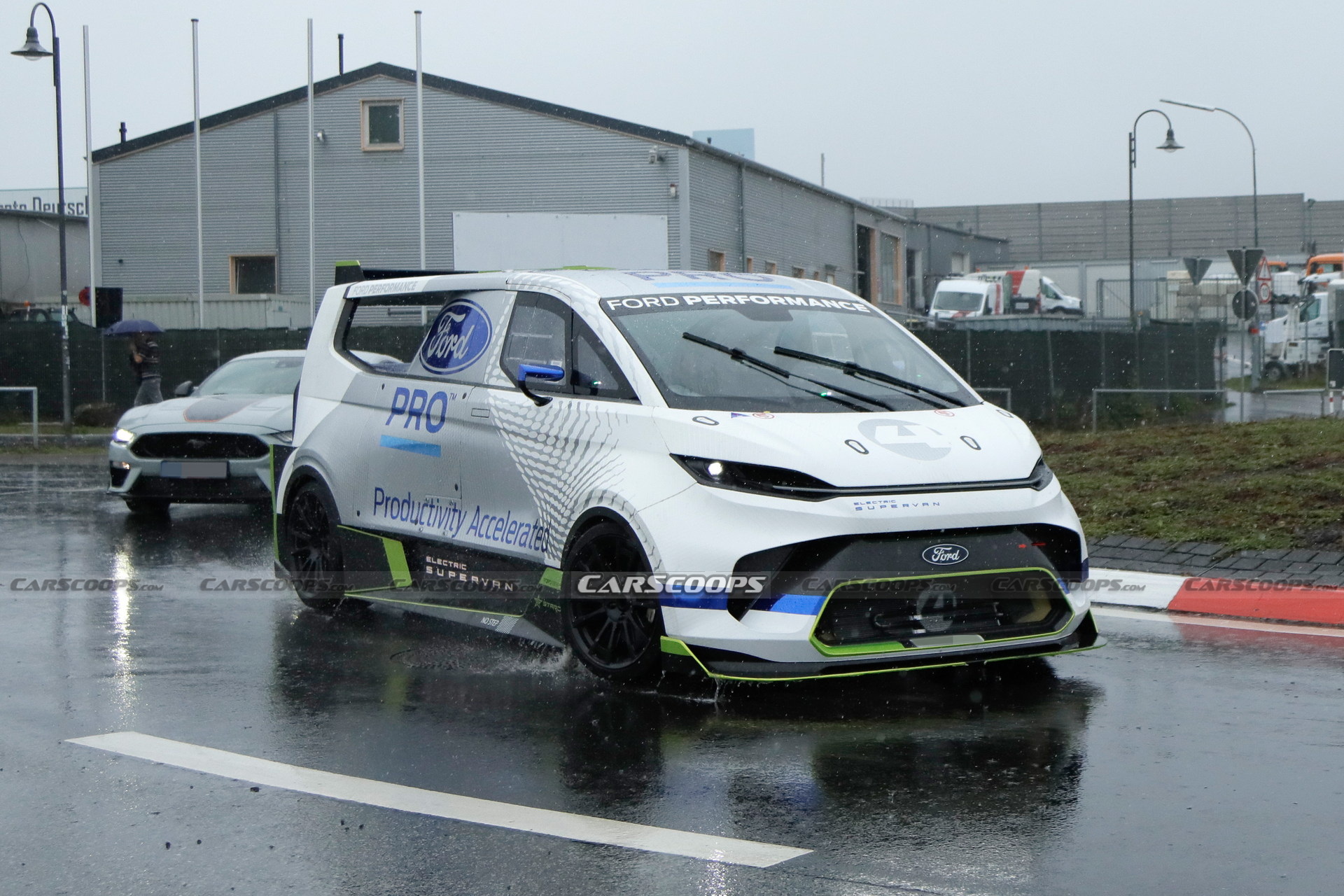 Don’t think for a moment that Ford is considering putting that monster into production, as much as some crazy collectors would love to own such a unique piece of automotive engineering. While the reason behind this track testing session remains a mystery, it could signal Ford’s interest in setting a lap record for the fastest van at the Nurburgring. With that much power and track-focused upgrades, this goal sounds quite plausible, if the conditions permitted it.

Unfortunately, the weather on the day of testing wasn’t ideal. Thus, Ford’s test drivers took it easy on the track, not taking any risks with the extremely valuable vehicle. Driving a concept on the track should be a nerve-wracking experience since the cost of replacement parts is not even close to that of your typical fender-bender. 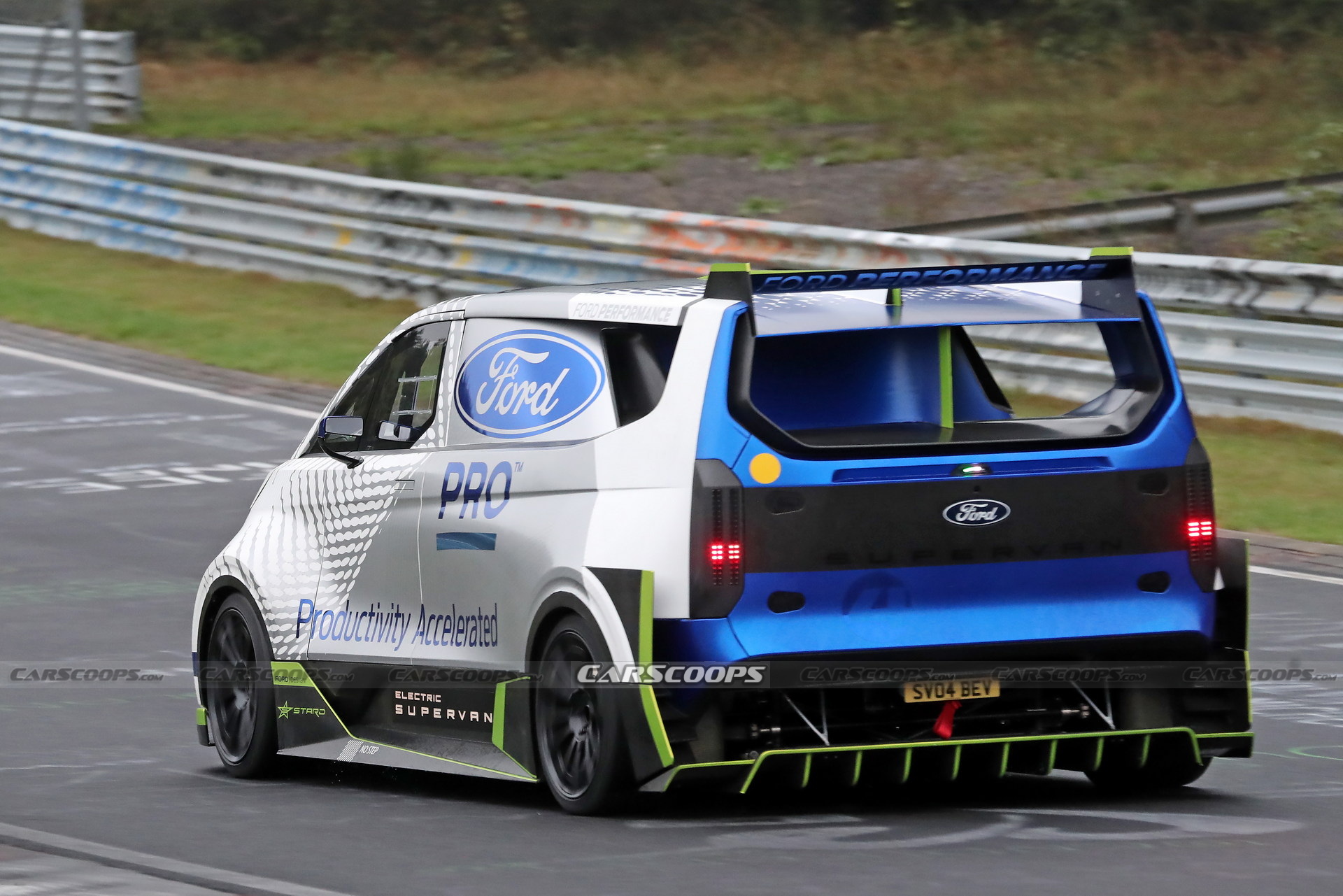 Indeed, almost every body panel of the SuperVan is custom-made from carbon-fiber, bearing no resemblance to the Ford E-Transit Custom which is sharing the floorplan with. The agressive bodykit is no match for an LCV, with large openings on the front bumper, a prominent splitter, aerodynamic fins, wide fenders, and two huge gaps on the side, channeling the air towards the rear end.

We suspect that Ford has more to say about the fastest and most powerful version of it’s midsize LCV, thus we’ll keep you posted on any news coming our way.