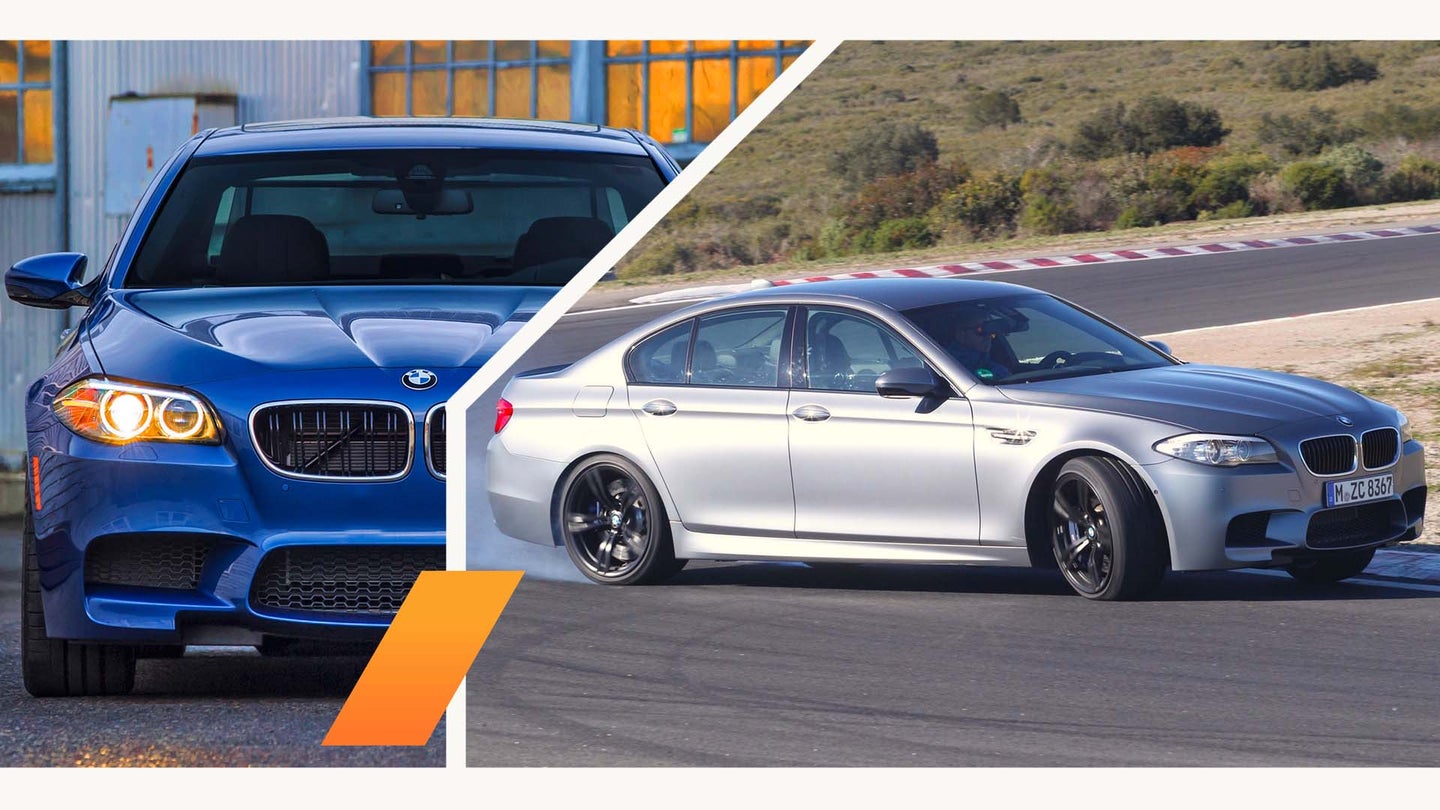 When people think of the greatest BMW M5 or all time, it seems like the E39 and E60 generations get the most attention. And why wouldn’t they? Handsome, athletic sedans with iconic intake and exhaust notes, rear-wheel-drive, and they can be found with a manual transmission (at least in the USA). I’ve heard The Garage‘s Editor-at-Large Andrew Collins use the term “Executive Express,” and there’s no better two-word description for these legendary M cars. But what about generations that have succeeded the E60, which ended in 2010?

The F10 BMW M5 was introduced in 2011 and later debuted in the USA for the 2013 model year. It’s become a massive performance luxury bargain over the past couple of years and could be appealing to anyone looking to spend less than $40,000 on a big fast sedan. In fact, it seems like $35,000 isn’t outside the realm of possibility for picking up one of these luxurious, opulent beasts with less than 100,000 miles on its dash, which also had an original base MSRP of $91,200.

It features a host of firsts and lasts in the iconic fast sedan’s lineage: it was the first generation to feature a turbocharged power plant, yet the last to have hydraulic steering and an available (albeit very rare and fetching a premium) manual transmission in the USA. It was also the last rear-wheel-drive-only M5 as well. Opinions vary, but it seems like most people view the F10 as possessing a lot of improvements over the E60 as well when it comes to refinement and overall performance.

The F10 M5’s maintenance schedule and costs might not be too head-ache-inducing, either. For a BMW, anyway. Here’s why the F10 is an excellent used luxury performance vehicle, as well as what to look out for if you’re in the market for one.

To my tastes, the F10 M5 is the best of modernity. Between the way it looks, how it performs, and how it’s appointed, it’s a compelling package for the cost of a moderate-mileage example, even in our still-bizarre used-car market. Whereas the E60 needs to be revved out to feel its immense 500 horsepower, the F10’s twin-turbo S63B44T0 V8 has all 502 lb-ft of torque available from just 1,500 rpm. It’s also a hot-V, meaning the turbos sit in the engine’s valley, which reduces turbo lag and allows for better packaging under the hood (though don’t always bode well for cooling). This means 0-60 mph can be achieved with a little courage in less than four seconds, and with all of its 553-591 horsepower and 502-516 lb-ft of torque (depending on year and Competition package vs. non-Competition package) sent to the rear wheels exclusively via a BMW Active M Differential, it seems like everyone reports that it’s an utter riot.

The F10 was the last M5 to have hydraulic power steering, dubbed M Servotronic, which matters to enthusiasts. A lot of complaints about modern electric BMW power steering, myself included, highlight that it’s nowhere near as good as previous hydraulically actuated systems in terms of feel, sharpness, and everything else that one seeks in such a crucial input. The F10 M5’s engine was also the first M engine to feature Valvetronic, too, which is BMW’s neat throttle-body-less method of induction.

But does it feel like a true M car? Considering its powerful yet not very-expressive powerplant, some reviewers like Vicki Butler-Henderson for Fifth Gear seem to agree that the F10 lacks raw emotion that was found in the E60’s ravenous V10, and a crucial trait for those who remember the glory days of BMW Films.

We’re always grading on a curve when it comes to judging BMW reliability and servicing costs, but truly, the F10 doesn’t sound too atrocious.

BMW replacement parts are incredibly expensive, but also water is wet, and OE replacement parts are significantly cheaper than anything with a BMW logo printed on its box. Plus, as we always sing as gospel here at The Garage, DIY wrenching with enough preparation, time, and the right tools can save you a lot of money.

Judging by some research on the massive F10.M5Post.com forum, and reported complaints, the F10 M5 doesn’t seem to have any common major issues. Owners report minor oil and coolant leaks, high oil consumption, suspension clunks, ignition issues, and fuel injection issues. These are all fairly mild problems in the grand scheme of European performance cars, which are all laid out in great detail on BMW forums.

Still, there are some annoyances, recalls, and minor things that were fixed as the F10 generation soldiered on. Stuff like a scary drivetrain error that can pop up on the dashboard, or weird rattles here and there, is all covered by ExoticCarHacks.com. For anyone who’s read horror stories about rod bearings in other Bimmers, massive oil leaks, and labor-intensive turbo replacements like on other BMWs, this all isn’t that bad.

And speaking of turbos: replacing them, while undoubtedly expensive, seems like a pretty straightforward job for any enthusiast because they’re right on top of the engine. This brings us to our next important point: tunability.

The twin-turbo 4.4-liter S63 V8 first made its appearance in a brutish sports sedan with the F10 and is still in pupil-dilating service today. Hilariously, 553-567 horsepower (the Competition trim possesses slightly more) is a very low floor when it comes to what kind of power this lump can produce.

The first modification that comes to mind is tuning, and there are multiple great options for boosting power with an ECU tune (er, DME since it’s a BMW). Brands like RaceChip, VR Tuned, Burger Tuning, PE Tuned, and BPM Sport (among many more) all offer methods of adding 60-120 more horsepower, depending on method, additional mods, and other factors. Intake and exhaust mods are all the rage as well, plus who could forget about swapping in upgraded turbos? Intercoolers and water-methanol injection are popular upgrade areas, too. Although I do not have personal experience with any of these, RaceChip or Burger Tuning seem like the quickest/easiest options, as they’re piggy-back tunes that don’t reflash the vehicle’s factory DME.

Like OE maintenance parts, aftermarket parts carry a small premium. Well, in some instances a massive premium, but only because it seems like upgraded intake parts made out of carbon fiber are all the rage, and turbo core charges are worth their weight in gold. Still, an extra 150-200 horsepower seems like a reasonable expectation after a handful of modifications, and 1,000 horsepower is possible with patience and a fat wallet.

Switching focus to the suspension, there’s no shortage of the usual suspects to maximize handling, including aftermarket adaptive dampers, easy-to-upgrade coilovers, and more comprehensive coilover upgrades. Swaybars, springs, and even an extensive selection of aftermarket brakes are also available to reign in all that massive weight, grip, and power.

If you’re in the market for a wild performance sedan to rip around in before the sun sets on mass internal combustion usage, the F10 M5 is a compelling option. The market never has any shortage of pre- or post-LCI (which stands for Life Cycle Impulse) examples available — the latter possesses a few upgrades done to the 5er’s exterior, interior, and infotainment.
With all things being equal, such as good service history, no major issues, and good overall condition, especially if you’re inclined to wrench on it yourself. Fuel economy might be painful depending on one’s weekly mileage, since factory economy is 15 mpg city and 22 mpg highway, and diving deep into the aftermarket would surely drop those numbers. And, let’s face it, it’ll never be as agile and athletic as its smaller sibling the F80 BMW M3. But for anyone after immense power in a comfortable package that can handle its portly self, 2022 Hyundai Elantra N money sure sounds enticing.