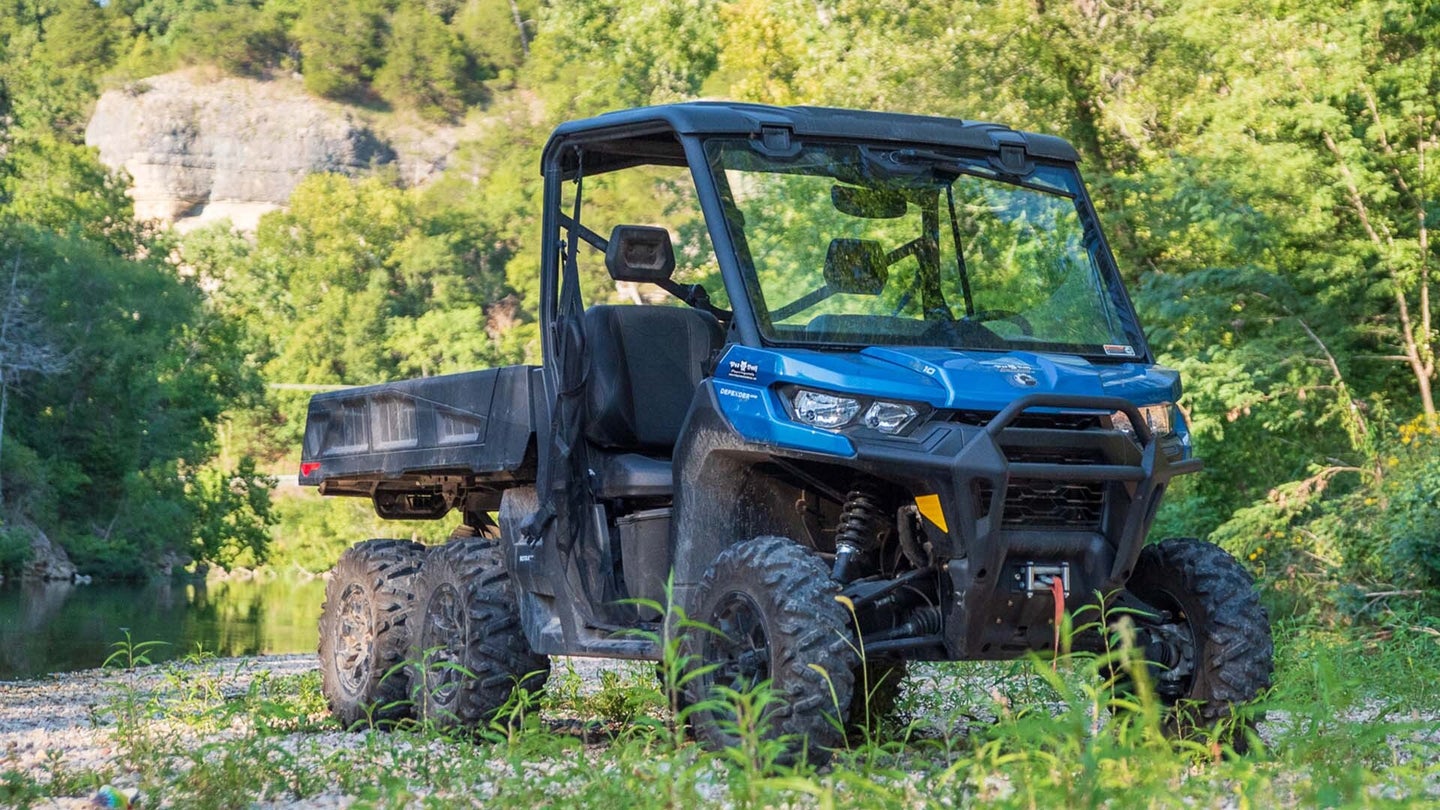 Some UTVs are toys meant for slinging sand, gravel, and mud. The 2021 Can-Am Defender 6×6 isn’t like that, though; it’s a tool. It may look even more ridiculous than the amped-up sport models you see in viral stunt videos, but that extra axle is there for two reasons: towing capacity and traction. I can attest that it delivers both of those because I used one every day for two months around my family’s creekside property.

It’s a workhorse, plain and simple. Whether I loaded the box with firewood, rocks, or—a little less glamorously—trash from our campground in the Missouri Ozarks, it was always down for the job. Really, that power-tilting six-foot bed is the best part about it, and the extra pair of wheels is an added bonus. It’s also one that you pay for, as the 6×6 rig is a full $2,700 more than the 4×4 model.

If you need a side-by-side to do work instead of impress your buddies, you can’t go wrong with the Can-Am Defender. If you want to do both, though, get the 6×6.

Can-Am builds a UTV for pretty much every want and need, and in turn, the Defender 6×6 XT HD10 caters to its own niche. While the Commander Max XT that I tested last year was a lot more sport-focused, this rig makes practicality its ethos. It actually shares its 976cc engine with a ton of other UTVs in the manufacturer’s lineup, but it’s detuned here to champion low-rev usability over 7,000-rpm performance.

This concept is reinforced by its two-door, long-bed layout. There’s little in the way of front overhangs, which definitely benefits the approach angle. It’s got a bold headlight and grille combo that takes cues from modern pickup design; apparently, the angry look is a hit with buyers. Even still, it isn’t exaggerated to the point of caricature.

There’s more than enough room in the cab for two full-size adults. I should know, given my 6-foot-5 frame and 280 pounds of heft. I never even bonked my head with a helmet on as I trounced around washed-up creek rocks that would rip a Camry’s front bumper off. The information display and drive mode controls are straightforward and easy to navigate, showing all the details you need on a clearly backlit digital screen behind the steering wheel. All the materials are hard plastic, which is par for the course, but don’t expect unscratchable surfaces.

As for the powertrain, I really like the idea of using an oversized, under-stressed engine. It’s always worked in the world of trucks, and in this case, 82 horsepower is plenty, even when the UTV is loaded to the max. The CVT is OK, turning engine speed into actual movement decently quickly. I’d love it if everything had the Honda Talon’s dual-clutch, six-speed transmission, but such is life.

The Defender 6×6 drives mostly the same whether it’s laden or empty, which is to say it’s actually fairly peppy still with a bed or trailer full of whatever-the-heck. It won’t break a speed record no matter what, but I’m glad to know it doesn’t turn into a slug with something hooked to the hitch. I pulled a trailer with six canoes measuring 17 feet a piece, not to mention a barrel full of paddles, lifejackets, and miscellaneous tools. Heavier loads certainly exist, and the Defender 6×6 still had about 1,000 pounds of towing capacity to spare, but I was pretty stoked to find how well it pulled it regardless.

You can probably guess that it’s not the most maneuverable, especially when the trees get thick and the path gets narrow. It’s not terribly long overall, but the 115.5-inch wheelbase is only just short of a four-door Jeep Wrangler’s. That affects its turning radius, as does the second drag axle that likes to leave ruts with those 27-inch Maxxis Bighorn tires.

It’s part of the price you pay for go-anywhere-you’ll-fit capability. So much of the terrain where I live is loose, meaning you can bury a rig in a hurry in certain spots. All six wheels did their job, getting me out of whatever hairy situation I found myself in, even when I manufactured the obstacles. There was one staircase-style climb I wasn’t able to scale without the winch, mostly due to the crumbling bank that wouldn’t allow the front tires a solid footing. There was also a log between the rear axles, making this a perfectly placed hurdle to stump the Can-Am.

Driving scenarios like this are few and far between, I admit. I was able to meander everywhere else in the Defender 6×6 without fear of getting stuck, which is exactly what you want in this type of workhorse. This sucker would be especially handy if you owned lots of steep, hilly property and used it to maintain everything. It’s great at getting into tricky spots, like the bottom of a holler, and you could fit a good load of wood in the bed if you’re clearing trees and so on. Better yet, the power-tilting bed works in a cinch so you don’t have to unload anything yourself. Stay tuned for a more in-depth breakout on all the jobs I did with the Can-Am!

The Highs and Lows

The sheer usability of the Can-Am’s box has got to be the biggest pro. It never hesitated to dump whatever was in it, even if the load was near the max payload. And since there’s no lockout mechanism that keeps it from tilting while in drive, you could easily spread-dump a load of mulch or gravel for at-home landscaping projects. Maybe I’m a little too excited by that, but hey, look at my track record. The difference between this and my dump truck is that rather than burying itself in mud or gravel, it’s plenty able to get around tricky terrain, even when loaded to the gills.

My qualms with the Defender 6×6 are admittedly limited. The dash-mounted shifter got hung up between neutral and drive from time to time, and the tester’s locking rear differential was stuck on, which didn’t help with its turning radius. These press units are usually used and abused even more than personally owned examples, so it’s not a huge surprise when they arrive with a bug or two. Oh, and while I love the bed’s functionality, the plastic it’s made of is scuffed super easily.

Thing is, the 6×6 UTV market is pretty…singular right now. Polaris used to make a Ranger 6×6, but not anymore. John Deere makes a six-wheeled Gator, but only two of the axles drive and it’s puny by comparison with just 15.5 hp and 1,400 pounds of towing capacity. Therefore, Can-Am can more or less charge what it wants for the Defender 6×6, which is offered in three trims: DPS, XT, and Limited. The DPS is the cheapest model, which ditches the winch and power tilting bed to achieve a $20,899 MSRP. Meanwhile, the Limited trim adds hard doors and HVAC for an even mightier sticker price of $31,899.

Even with the newly adjusted price point, I think the Defender 6×6 XT HD10 is a solid value (and a mouthful). It’s better than what you get from other manufacturers who ride the wave of name recognition to $30,000-plus UTVs that do less than this can. If you’ve got a job that will stump this rig, you’re probably better off getting a half-ton truck.

You could certainly get a good, used Ford F-150 for the same money, that much is true, but not much cross-shopping goes on between the pickup and UTV markets. People who want a side-by-side have their own reasons, and climbing in and out of the Can-Am 1,000 times is definitely easier on your joints than doing the same with a full-size truck. So if you need an all-around workhorse that delivers (and dumps) the goods with ease, get the Defender Pro 4×4. If you need one that will do all that, go even further into the woods, and come out the other side, then the 6×6 is the one for you.

The post 2021 Can-Am Defender 6×6 XT HD10 Review: Work and Wheel Wherever appeared first on The Drive.