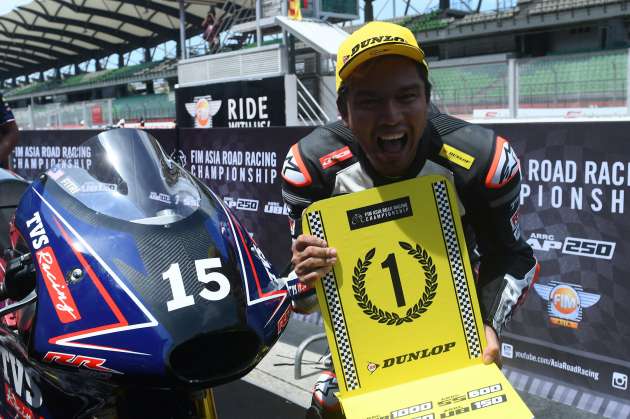 A win in Race 2 for Malaysia’s Muhamad Fitri Ashraf in the 2022 Asia Roda Racing Championship (ARRC) TVS Asia One Make Championship race series at Sepang. Held over the weekend of May 28 and 29 at Sepang International Circuit (SIC), Fitri held off a strong challenge by Indonesian Decky Tiarno Ardy, who came in second after a neck and neck battle.

Fitri pipped Decky to the finish line with a last minute dash at the final corner at SIC, with the leading group of three other riders chasing behind him. Racing the TVS Apache 310RR, the group of four which included Fitri and Decky, Vorapong Malahuan of Thailand had to settle for third despite getting leading Race 2 at the start.

Vorapong’s compatriot from the Land of Smiles, Watcharin Tubtimon, settled for fourth, while Indonesian Agung Septian came in fifth. Commenting on the race, Fitri said he made changes to his race strategy after coming in fifth in Race 1, explaining, “it was a good race even with the casualty in the beginning. I grasped the lessons from Race 1 and made the necessary changes in Race 2. It worked as planned.”

After the inaugural running of the TVS Asia One Make Championship, Vorapong tops the riders’ standings after two races with 41 points, followed by Decky with 40. Fitri is third in the table with 36 points. Action moves to Japan for Round 3 of the 2022 ARRC at Sportsland Sugo, Japan, on August 12 to 14.