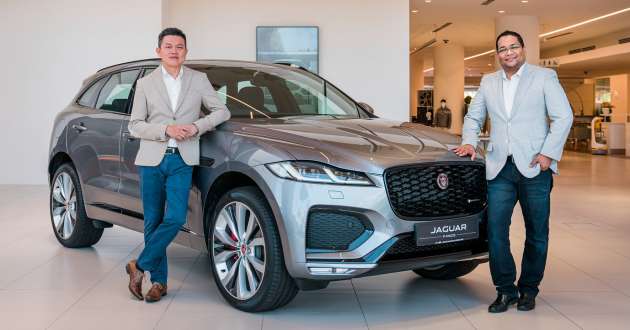 Following the launch of the updated XF two weeks ago, Jaguar Land Rover Malaysia has now introduced the new Jaguar F-Pace facelift in Malaysia. The brand’s first SUV was revised back in 2020 and is arriving here in a sole variant, the 2.0L R-Dynamic, which retails at RM598,800 including 10% sales and service tax (SST), but before road tax registration and insurance.

Design changes made to the F-Pace begin at the front, where there are slimmer LED headlamps featuring a “double J” daytime running light signature to mimic recent Jaguar models. The grille also gets a new diamond mesh pattern for its insert, which has been brought further forward so it’s no longer recessed.

As for the rear, the tailgate has been slightly reshaped to accommodate slender LED taillights inspired by the I-Pace to emphasis the vehicle’s width, with the latter also incorporating Jaguar’s “chicane” lighting graphic.

The changes continue on the inside, where the F-Pace receives an entirely new dashboard architecture and centre console that are more angular in their design. More modern in appearance, key changes from the previous model include the new gear selector, which is now a short lever instead of a rotary dial.

Switching between the available drive modes (Comfort, Eco, Rain-Ice-Snow and Dynamic) can be done via a smaller dial beside the gear lever, while Configurable Dynamics enables drivers to set engine response, gearbox shift points and steering weight to suit their personal preferences.

Other standard equipment that comes with the F-Pace are autonomous emergency braking, lane keep assist, cruise control with speed limiter, driver monitoring, along with other advanced driver assistance systems. Like its sedan sibling, the F-Pace also gets Active Road Noise Cancellation that generates an opposite phase sound wave to remove the noise heard by occupants from the exterior.

For power, the F-Pace comes with an Ingenium 2.0 litre turbocharged four-cylinder producing 250 PS and 365 Nm of torque, which is directed to all four wheels via a ZF-sourced eight-speed automatic transmission and all-wheel drive. So configured, the SUV takes 7.3 seconds to get from 0-100 km/h.