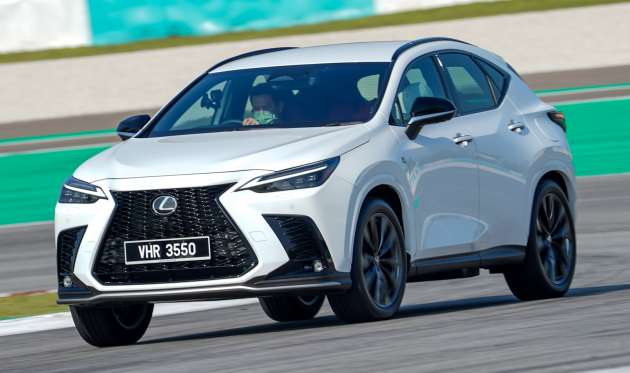 Here are full details and local specs of the 2022 Lexus NX, which was open for booking last month. The second-generation SUV is available here in two variants: the NX 250 Luxury with a 2.5L naturally aspirated engine and the NX 350 F Sport with a 2.4L turbocharged engine.

The NX story began in 2014, where Lexus’ belated entry into the mid-size premium SUV segment shocked many with a daring sharp suit. Lexus Malaysia launched it locally in early 2015, and the NX has been a success here, contributing 24% of the company’s total sales since introduction. “Provocative design” is listed as one of the NX’s success factors.

That this sequel is less shocking might be partly because we’ve been desensitised to the Lexus look, but the design team deliberately opted for a shape defined by “softer angles and more organic forms” this time around, coupled with a focus on proportions. 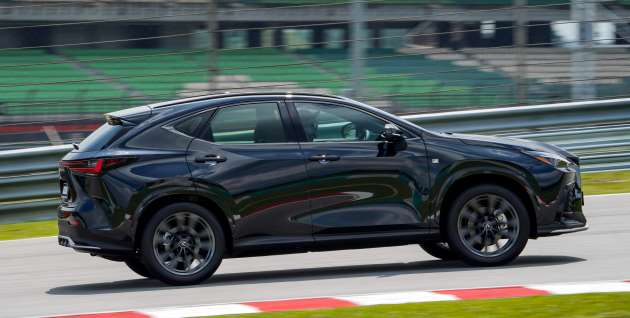 Now underpinned by the GA-K version of the Toyota New Global Architecture (TNGA) platform (used by Toyota RAV4 and Harrier, Lexus ES among others), the NX has a slightly larger body – at 4,660 mm long and 1,865 mm wide, it’s 20 mm larger in both directions. The 2,690 mm wheelbase is 30 mm longer than before, while it’s a a touch taller too (+5 mm). A wider track and 20-inch wheels – two inches larger than the original NX’s launch rims – give the new NX a more planted stance.

Notable design cues include a taller and upright spindle grille (a longer front end is the visual effect, also allows for more efficient air flow and cooling), the merger of the LED daytime running lights and main headlamp cluster (no more separate tick LED DRLs) and a softer, more organic profile, fused with the sharp lines that we associate with modern Lexus.

The LED DRL-headlamp merger and the deletion of the separate chrome grille frame is part of an effort to simplify things, which reduces both parts and weight. 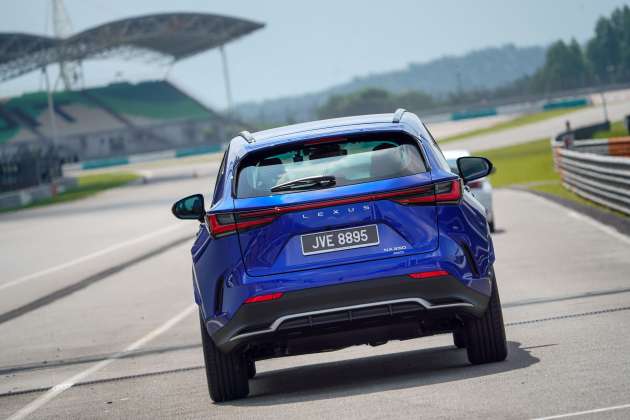 Moving to the side, the beltline is very straight and very crisp – no longer full length, it’s been shortened to just before the rear door handle, where there’s a kick-up to the windowline. Lexus says that this gives the cabin a condensed feel. The lower crease that traces the wheelbase also follows the same trajectory, which means it’s shorter than on most cars. Even sharper is the line that emanates from the tail lamps. The shallow daylight opening is very similar in shape to the outgoing car’s.

To the casual observer, the biggest change will be at the rear, where the L mark has been replaced by a spaced out L E X U S logotype first seen on the LF-Z Electrified concept from March 2021. This also means that there will no longer be double branding at the rear, where the L mark coexisted with a small logotype. A central horizontal light bar combines with the L shapes at the sides for an unmistakable three-piece signature. 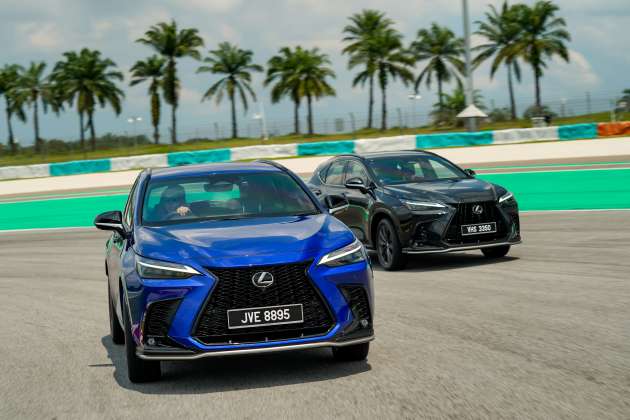 The D-4ST fuel injection system delivers high-pressure injection directly into the centre of the combustion chamber, giving improved combustion. The system also provides low-pressure port injection – Lexus says dividing the injection in this way helps achieve optimum combustion, while performance is enhanced through integrated control of the fuel system and turbo boost pressure. The turbocharger is a new high-efficiency unit with its own cooling system, which uses an electric pump as well as a water-cooled intercooler.

The NX 250 gets Normal, Eco and Sport modes; while it’s Normal, Eco, Sport S, Sport S+ and Custom for the F Sport. The difference between the Sport S and Sport S+ modes is that the latter also adjusts the Adaptive Variable Suspension (AVS) system and electric power steering to be more dynamic.

The new electronically controlled full-time AWD is a first on a Lexus model. Torque distribution between the front and rear axles varies from 75:25 to 50:50, depending on the situation, and the status is displayed on the multi-info display.

Elsewhere under the skin, the F Sport gets AVS and front and rear performance dampers to go with its sportier character. Both 250 and 350 ride on 20-inch alloys and 235/50 rubber, but the finishes are different – dark grey with bright machined finish for the Luxury and gloss black for the F Sport.

Before we proceed inside, a note on suspension and dynamics. Like before, the suspension consists of MacPherson struts in front and a trailing arm, double-wishbone design at the rear, but there’s fresh tuning for the shock absorbers. The wheel fastening structure has been changed from stud bolt and hub nut fastening to hub bolt fastening. By increasing rigidity and reducing unsprung weight, this measure contributes to steering response and ride comfort.

The steering adopts Lexus’ first variable rack gear to improve both high speed stability and quick cornering response, in addition to easier low speed handling. In the braking department, a new-shape brake pedal pad was developed for easier depression and switching between pedals. 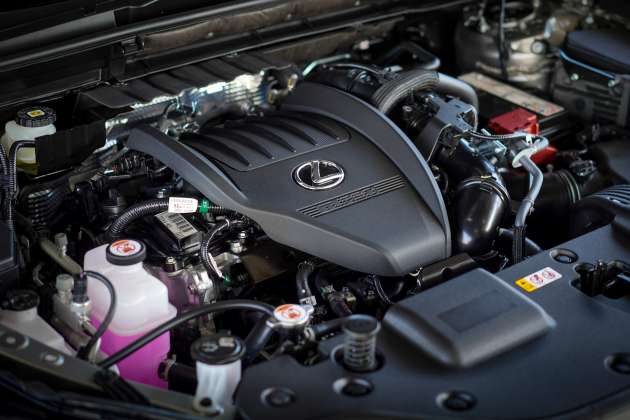 The premium brand is keen to emphasise on the Lexus Driving Signature (LDS) that the NX possesses. LDS brings a greater sense of stability, power and security, offering a “linear driving feel with a more direct steering communication between driver and vehicle,” Lexus claims.

We already consider the outgoing NX to be a more comfortable and hushed cruiser than some of its German rivals, but further NVH improvements have been made. In addition to optimising sound-absorbing and insulating materials, Lexus says that the air flow and wind noise seeping into the cabin has been reduced by around 15%.

Measures include a revised weather strip and front door glass shape to improve door sealing, a new sound insulation material for the front door glass itself, and a twin-lock structure for the engine hood. The latter, a first for Lexus, suppresses engine hood vibration caused by air turbulence. The 2.4T features Active Noise Control. 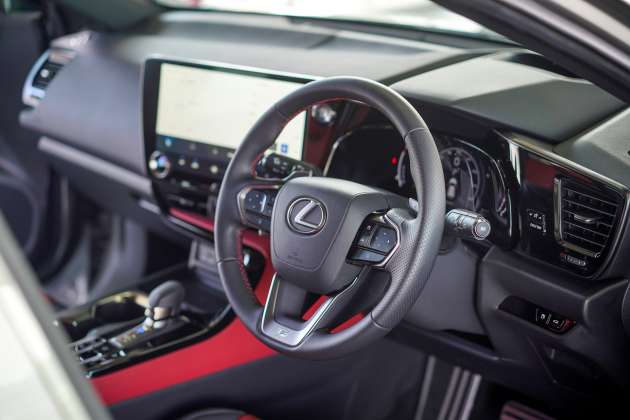 It’s the interior that receives the biggest change. It’s a paradigm shift for Lexus, a complete rethink that sees the brand ditch the much-maligned and genuinely troublesome Remote Touch Interface with the mouse-like controller. The cockpit is based on the tazuna concept that was previewed by the LF-30 Electrified showcar from the 2019 Tokyo Motor Show. The word tazuna is derived from the “reins” used to control horses. So, horse and rider as… wait, that’s a different brand.

Te new tazuna ethos allows the driver to “intuitively connect with the car and concentrate more on driving operations”, and that is done by having a huge touchscreen of a centre stack angled at the driver. Not only is the 14.0-inch screen six inches larger than the old one, it’s finally a touchscreen. Yes, we’re repeating ourselves, but a touchscreen in a Lexus is what the car world has been crying out for, for a long time now. Goodbye RTI, you will not be missed.

The big screen is surrounded by a couple of physical controls, which is a good thing. Note the location of the start button and drive mode select switch, which are placed for the driver to reach without losing his/her driving posture. Lexus says that the number of physical switches have been reduced from 78 to 45, but they intentionally retained physical buttons for the most frequently used functions.

With a new screen comes a new system. The menu is displayed as icons on the side closer to the driver, and the layout of the screen is divided into display areas according to the granularity of the information. Smartphone connectivity is via Android Auto and wireless Apple CarPlay. With phone connection, one can use Waze or Google Maps, but the NX has its own built-in navigation system, too.

To cut glare from the screen, Lexus applied anti-reflective coating to the windscreen and glare-reducing bonding tech to the touchscreen. The latter “fills in the gaps” between the glass panel and the LCD and attaches them together. It minimises the refractive index of light and reduces screen glare as a result.

The no distractions theme is further supported by the new Touch Tracer Operation, which combines the head-up display with touch sensor switches on the steering wheel. When the driver touches the steering buttons, the operation guide is displayed on the 10-inch HUD (or on the digital meter panel when the HUD is off). The HUD offers three modes with different information and layouts.

With the Remote Touch Controller gone, Lexus has found space for a Qi wireless charger, which can slide away to reveal a cubby. Last but certainly not least for a Lexus is sound. We get the Lexus Premium Sound System with a Pioneer amp and 10 speakers, including a large-capacity subwoofer box, utilising the bass reflex structure of the rear speakers and the body framework (lower back) to achieve “rich and crisp” low-frequency reproduction.

The cargo floor area is 34 mm longer, which provides a 14% increase in cargo volume to 520 litres. This is expandable to a 1,411 litres with the 60:40 rear seats folded down (powered in the NX 250 Luxury). Lexus says that boot can take in three golf bags or two large suitcases with all seats in place. The rear hatch is powered and has the kick-to-open function. A new motor means that the open/close time has been reduced by half to around four seconds, and the process is also quieter, Lexus says. 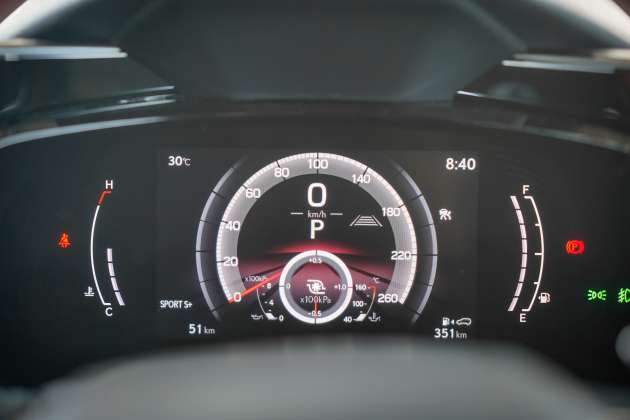 The reverse camera has a 360-degree panoramic view monitor and there are seven airbags including a driver’s knee bag. Finally, the Lexus-first E-Latch System replaces the latch/unlatch mechanism of the door with electrical control. This delivers a smooth door operation and an effortless feeling, Lexus says. We’re curious to try this out.

While both Comfort and F Sport seats are finished in smooth genuine leather and have eight-way power with driver’s side memory, the F Sport ones have two-way powered lumbar for the driver (four-way for Luxury) and a four-way adjustable headrest (two-way for Luxury). The Luxury goes one up by having power-folding rear seats. As for colours, there are eight hues available, including the F Sport-exclusive White Nova and Heat Blue. F Sport cabins can be had in full black or Flare Red.

The CBU imported Lexus NX 250 Luxury is priced at RM370,888 while the NX 350 F Sport will set you back RM389,888. Prices are on-the-road without insurance, inclusive of sales tax, which means that deliveries will start after June 30. Order books are open now. For further reading, check out our global launch report.