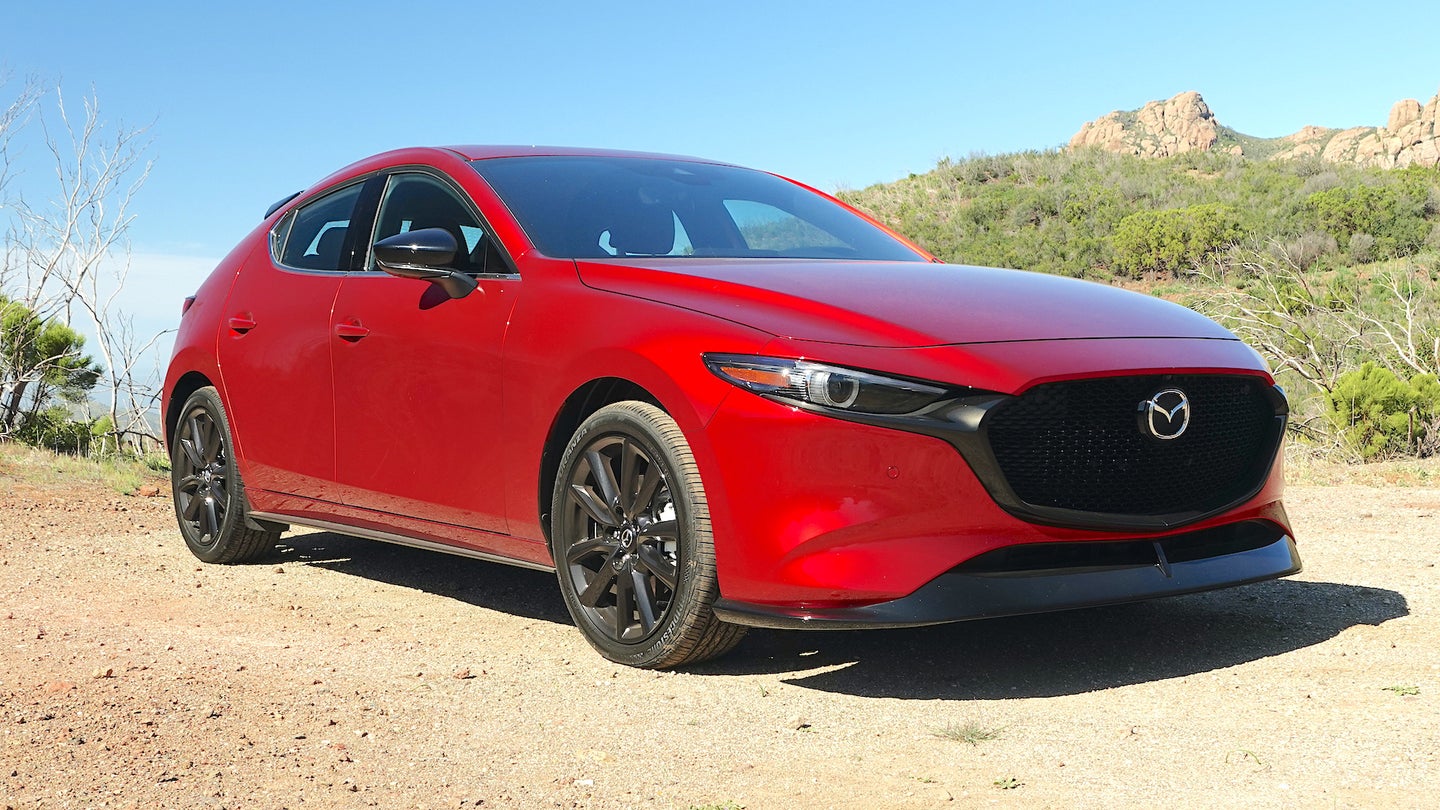 You know the book Eat This, Not That? It’s the one about swapping various foods for healthier-but-still-satisfying alternatives? Don’t eat the Big Kahuna burger, it might say, eat this McDowell’s double-entendre instead. If such a thing existed for cars, with dollars in place of calories, it might say something like, “Don’t buy the Audi A3, buy the 2022 Mazda 3 Turbo with the Premium Plus package.”

Let’s not put too fine a point on that. It’s just an acknowledgment that Mazda’s product team, looking to give the company an edge in a competitive market, has adopted an approach that should be familiar to some Audi drivers: exquisite interiors, meaty power delivery, and a comfortably firm ride.

It says something about the team’s success: that a buyer could cross-shop the two cars and not feel pickpocketed for choosing a loaded Mazda 3 Turbo Premium Plus package—with more power and torque and at around 10 grand less—over a similarly equipped Audi A3 Prestige Quattro. If you prefer hatchbacks, this exercise gets even more pertinent: You can’t buy the A3 hatchback in North America, but you can get the Mazda hatch like the one I drove in Los Angeles recently.

I’m not breaking any news here; the Mazda-Audi similarities are part of an ongoing storyline in the industry. Ultimately, it’s a superficial one, considering the A3 offers tech equipment the Mazda 3 does not, and an ownership experience juiced by well-capitalized Audi dealers stocked with every sort of espresso pod. Still, Mazda has found its own way to add value. To an extent, it works.

That’s the top line for the fourth-generation Mazda 3 Turbo, the base car of which is now in its fourth model year. Let’s venture, uh, forth, and find out about the rest of it.

Auto journalists talk about a condition we call the Mazda Paradox: The more we tell people to buy Mazdas, the more they buy Hondas and Toyotas (and Kias and Hyundais). It’s a running joke that reveals Mazda’s uphill battle as a small automaker in a high-volume market. Still, the Mazda 3 Turbo is a difficult one to pigeonhole.

The Turbo does a few things well: There’s that attractive, well-considered interior, with exemplary-for-the-segment design and materials. It’s a nice car to drive, although not particularly elevating as an experience. Its chassis dynamics don’t inspire spirited jaunts up canyon roads, although in a few conditions—higher speeds, fast corners—the Mazda 3 Turbo can snuggle up to thrilling. Call it thrilling-adjacent. It’s not classically attractive, but has some clever turns of sheet metal, and its Kodo design language shows a lot of thought and care taken in the studio. It looks striking in the optional Soul Red Crystal Metallic paint, and stands out when parked on a side street loaded with gray-to-black crossover SUVs.

Tech features included with the Premium Plus package are merely the table stakes for driver-assistance in the industry: traffic-jam assist, front and rear parking sensors, 360-degree monitor, rear cross-traffic alert with braking support, and rear-crossing with smart brake. The last two operate at low speeds, detecting pedestrians and other vehicles, and applying the brake automatically. In the area of driver-assistance functionality, Mazda has a long way to go to catch up to the leaders in the industry like Toyota, Honda, Hyundai, and Subaru. For what it’s worth, with an overall crash rating of five stars, passive safety makes up for underachievement in active safety.

Still, there’s a lot to like, and the Mazda 3 Turbo shares positive attributes with the company’s other models: that spartan interior with quality materials all over the place, not just the high-touch points, a premium driving feel—mainly in terms of ride quality and power delivery—and according to Consumer Reports, a strong showing in reliability. In the decade since breaking away from Ford Motor Company, Mazda has assembled a stable of appealing products by doing what larger automakers don’t have to do. That is, limit its scope, pick a few areas to perfect, then move upmarket.

Here’s where I point out that the Mazda 3 Turbo isn’t what you’d call a “driver’s car” like the company’s old Mazdaspeed models were. You’d be excused for expecting it to be so, if you came of age in the ‘80s and ‘90s and still equate the Mazda brand with its performance and motorsports legacy. That’s a matter of lapsed perception, though, because it’s been quite a while since Mazda was that automaker, the one that benchmarked its sports sedans against BMWs and got banned from Le Mans because it built a prototype racecar that sliced the field like a cruise missile and sounded like a feral buzzsaw. It does maintain a single motorsports halo in the MX-5 Miata, which has its own club-racing class and remains an exciting platform.

Mazda’s motto is no longer Zoom Zoom, but Feel Alive, which may be a vague brand concept, but it does assign a more holistic mission to its cars’ dynamics, implying driving excitement without fully defining its parameters.

With the 3 Turbo, Mazda has traded pure adrenaline for more of a sybaritic buzz. It’s a different space than the words “Mazda” and “Turbo” might have occupied in the past. The Mazda 3 Turbo may not be a pure corner carver, but it has a tight concatenation of component feel: hand and foot controls that match the power delivery, which matches the chassis. It feels cohesive and curated within a specific dynamic range.

The engine is a pip, however. As my week-long stint in the Mazda 3 Turbo happened in California where 93 octane fuel is verboten, me and my tank (a meager 12.7 gallons) of 91 AKI made do with the lower power and torque figures, although it would be quite a party trick to tell the difference without a dyno. Even still, it’s a premium-experience engine that pairs more closely with a tux than a flat-brim cap. Power rolls on smoothly and elegantly, where the Mazdaspeed of yore was all click-click-zoom (insert fiendish cackle). It still feels happy at over 5,000 rpm, and thanks to a “Harmonic Enhancer,” registers its pleasure as a fitting, if ersatz, electronic growl through the stereo speakers.

Unfortunately, a languid six-speed automatic transmission subverts the Mazda 3 Turbo’s sense of occasion, even in Sport mode, which also adds a more aggressive throttle map. Shifts blend together as if development engineers were competing to see who could keep an egg from rolling off the roof. When paddle shifted, downshifts fire off more rapidly, and satisfyingly, however, so all is not lost on canyon roads.

Unhurried controls: slow, deliberate steering and an inert, but ultimately reassuring brake pedal create a driving vibe that reads as restraint rather than lethargy. Chassis-wise, the Mazda 3 Turbo is at home on higher-speed B-roads, where unwinding from long, simple curves with a luscious roll-on of power, and steaming full-throttle toward the horizon provide the best sort of driving entertainment for its state of tune. An early morning drive up CA-14 to the high desert showed off the hatch at its best: Eating up a 6 percent grade, taking wide curves confidently, and its driver arriving refreshed from the climb. Maybe it is a driver’s car, but with a grand touring sensibility. It favors normal drivers in a standard operating domain looking to juice up long, monotonous commutes.

Mazda ditched the previous-generation Mazda 3’s Ford-provided multilink rear suspension in favor of a torsion beam rear axle, which it shares with the company’s CX30 crossover. The simpler setup—in which the beam deforms, twists and flexes, providing a kind of semi-independent suspension—is a liability for handling in high-G corners and for stability over roadway deformities, but is lighter and can be a benefit for packaging. It’s no stretch to assume cost-cutting was a consideration, although Mazda has said the setup also delivers a more comfortable stop-and-go ride for passengers, with fewer neck-bobbing oscillations.

Unlike in past Mazda 3s, there’s no claim to the street scene here; even the optional front air dam and rear hatch spoiler don’t register as sport-compact garnish, but as unobtrusive bits of haberdashery. Sophistication, not flash, is Mazda’s current operational turf. An available appearance package includes rear aero flares, rear skirt, and side sill extensions. The effect of the add-ons is visually subtle, with just a hint of tuner flair, and only a trip to the wind tunnel might get a read on their aero effects.

The top-of-the-line Mazda 3’s infotainment functions are operated from a seven-inch cluster display and an absolute sliver of an 8.8-inch dash screen, small compared to the latest generation of screenage from other automakers. Apple CarPlay and Android Auto are wired-only, but the Bose sound system is a bright spot, made even brighter by the Mazda 3’s quiet interior.

Priced a sneeze away from 40 grand, Mazda 3 Turbo plays in a tough league, with competitors ranging from the Honda Civic Si and Volkswagen Golf GTI, on the performance side, to the tech-loaded Audi A3 and BMW 228i xDrive Gran Coupe on the luxury side. The Mazda 3 seems to split the difference among them, with the most power of all but the BMW, and strong whiffs of refinement and luxury, but without the state-of-the-art toys and chassis dynamics to match.

Indeed, let us remember that Mazda is a small but experienced automaker that faces down monster OEMs the way some of us face down a Cheesecake Factory Macaroni-and-Cheese Burger: with sharp focus and a strategic plan. Mazda punches above its weight by identifying a few important elements on which to overdeliver, and, well, overdelivers on them.

The Mazda 3 Turbo is a daily driver engineered to add a touch of excitement and some premium luxury to your standard wheel duties. You won’t go out of your way to find the twistiest canyon roads or wake up early to go autocrossing. This Mazda 3 is about mastering the mundane: highways, B-roads, commuting, and cutting an unconventional figure while doing conventional things.

Mike Spinelli has covered cars and car culture in print, online, and on family cable TV, which is as glamorous as premade pancake batter. Send him tips, comments, and story ideas at [email protected].