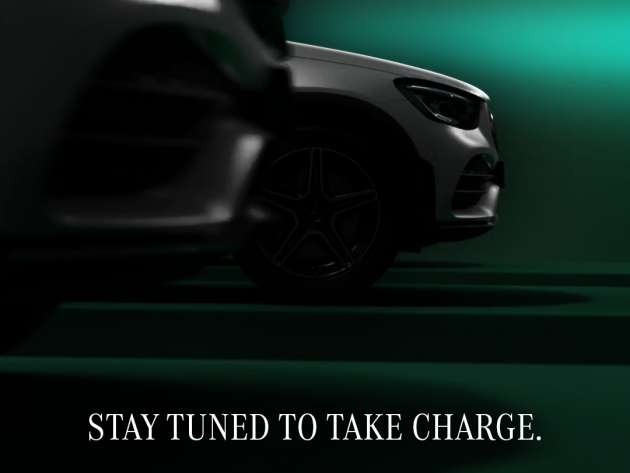 Mercedes-Benz may have already revealed the all-new X254 GLC, but there’s clearly still life left in the old X253, as this cryptic teaser from Mercedes-Benz Malaysia’s social media channels shows. The shadowy image above shows the outgoing compact executive SUV, hinting at a new variant soon to go on sale.

The “Take Charge” tagline makes it clear that this is an electrified version of the car, which leaves just one possible model – the GLC300e plug-in hybrid. It was revealed back in 2019 but looks to be finally making its way to our market, more than two years after it went on sale in neighbouring Thailand.

With 4Matic all-wheel drive as standard, the GLC300e sprints from zero to 100 km/h in 5.7 seconds on its way to a top speed of 230 km/h (capped at 130 km/h in electric mode). A 13.5 kWh lithium-ion battery provides enough energy for an all-electric range of between 39 and 43 km on the WLTP cycle, contributing to a combined fuel consumption figure of between 2.2 and 2.5 litres per 100 km.

Charging has been improved over previous Mercedes plug-in hybrids thanks to the more powerful 7.4 kW on-board charger, which will fill the battery in an hour and a half using an AC wallbox. With a conventional domestic socket, it takes around five hours to get a fully-charged battery.

One interesting thing about the teaser is that it actually shows two cars, with another GLC in the foreground. While this could presage yet another variant of the GLC, it may well be that the GLC300e will also be made available as a Coupé, which is also offered in Thailand.

This is certainly within the realm of possibility, as both the regular GLC and the sleeker-roofed version are assembled locally in Pekan, Pahang. This means both versions of the PHEV will be eligible for tax reductions offered for CKD hybrids.