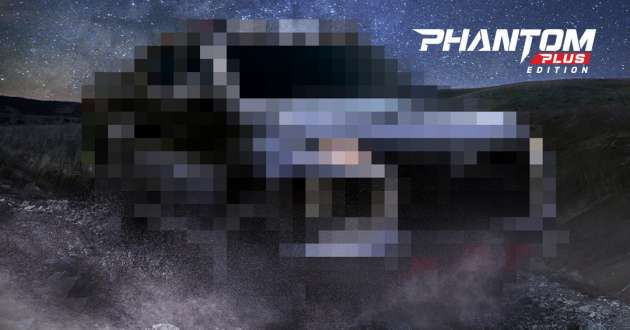 Mitsubishi Motors Malaysia (MMM) has teased a new variant of the Triton on its social media channels. Called the Phantom Plus Edition, the company says the new offering is for those who “crave for something extra?”

Just how “extra” is it? Hard to tell as the model is heavily censored in the teaser image, although we should expect quite a few changes to the exterior and interior of the double cab pick-up truck, like we’ve seen on previous special Tritons like the Knight. On a related note, the previous generation of the Triton was also offered as the limited edition Phantom Edition.

To go along with the teaser, there’s a link to a page where interested parties can register their interest. We didn’t find any details about the Triton Phantom Plus Edition on the website aside from the company telling us that this will be “a beast different from the rest.”

Currently, the range-topping variant of the Triton is the Athlete, which is priced at RM146,600 on-the-road without insurance. It comes with a 2.4 litre turbodiesel engine that pumps out 181 PS at 3,500 rpm and 430 Nm of torque at 2,500 rpm, with drive sent to all wheels via a six-speed automatic transmission and four-wheel drive system – the latter comes with several modes selectable via the Super Select 4WD-II control dial.