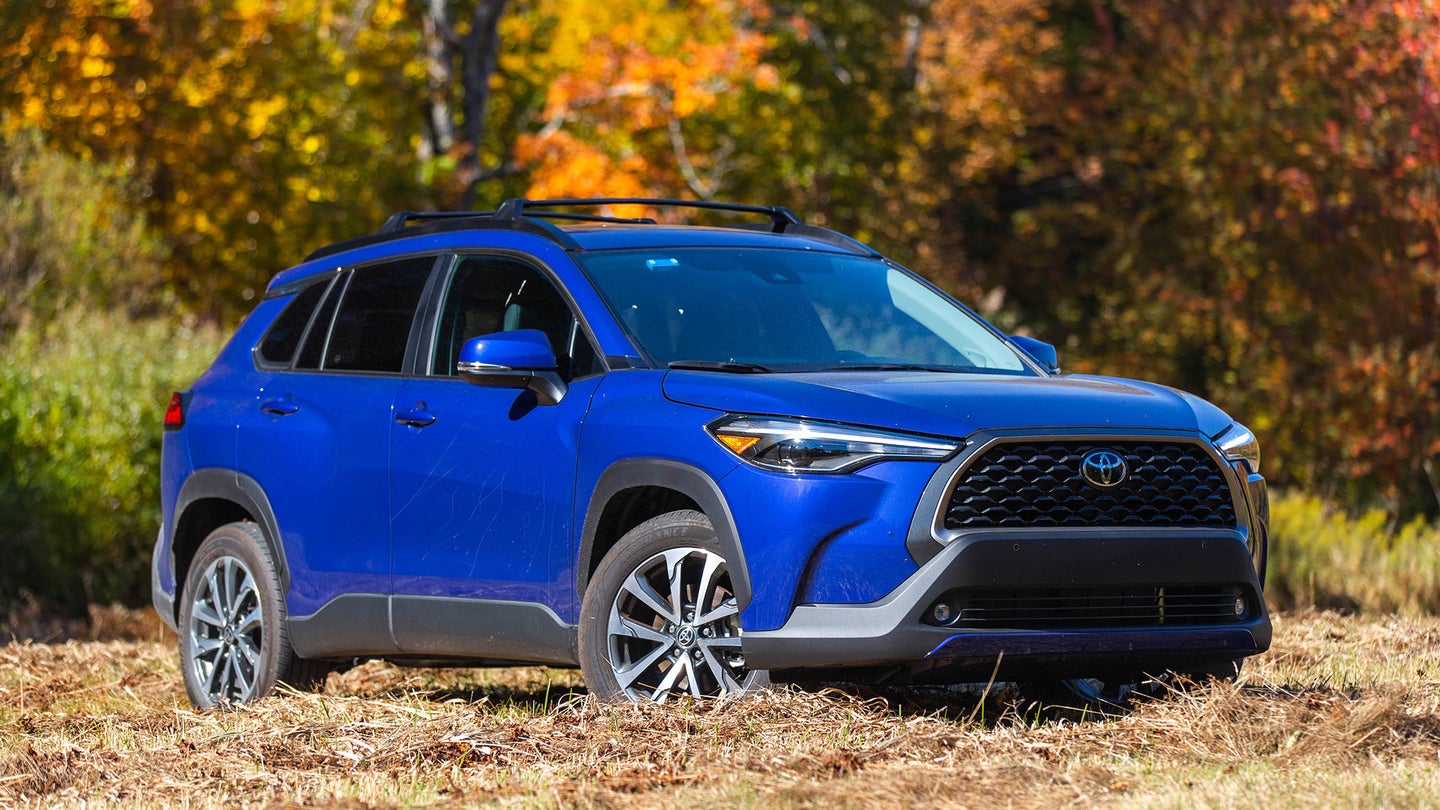 There’s a method to all of this. Small cars don’t sell well, so take said un-selling small car, lift it, classify it as a subcompact crossover, and price it out higher. It’s been the case with the Mazda 3 and CX-30, as well as the Honda Civic and HR-V. It’s also how you’d describe the relationship between the Toyota Corolla and the 2022 Toyota Corolla Cross. Except Toyota didn’t hide what the latter actually is with a tricky new name. It is the Toyota Corolla Cross-over. The “over” is just silent.

The main reasons to shop this segment, as far as I can tell, have to do with size and price. Perhaps you’re looking to downsize or you just don’t need something as large as a midsize crossover. You also don’t want to pay midsize crossover prices. These are noble endeavors.

In an age where automakers market cars as “active lifestyle vehicles” so powerfully that The North Face could take a lesson, the Corolla Cross is a nice departure from all that. It’s a return to basics: A car that doesn’t lose itself in pretend ruggedness or too many options. It’s decently fun to drive, but its main strengths are fuel efficiency and (base) sticker price. It just faces some really, really tough competition.

Arriving for the North American market in 2021, the Corolla Cross is sized and priced to sit neatly above the smaller CH-R and bigger RAV4. It is offered in three trims: L, LE, and XLE.

Handsome, but rather anonymously so from the outside, the car’s almost cute with its rounded shapes and softer lines. Though the headlights do appear to be drawn back in anger, the overall design thankfully lacks the furious aggression that defines so many modern cars, with Toyota’s Lexus luxury arm being a particularly notable offender. There are loads of black plastic cladding along the side skirts, bottoms of the front and rear bumpers, and up along the wheel arches, but I don’t mind. I like cladding, actually. It protects your car from rock chips and rust.

From the driver’s seat, there’s a steering wheel, a gear selector lever, and an infotainment screen. Lower-trim models benefit from a 4.2-inch screen driver information screen, while the top-trim XLE models use a seven-inch screen. There are plenty of buttons for the radio and climate controls, and even the tachometer and fuel and temperature gauges are analog. Blessedly, there are also no paddle shifters behind the steering wheel. This car does not cosplay sportiness.

Built on the GA-C platform, the only engine currently being offered with the Corolla Cross is a 2.0-liter four-cylinder, good for a claimed 169 horsepower and 150 lb-ft of torque. You can get the car with either front-wheel drive or all-wheel drive, but the only transmission option is a CVT. Toyota announced a Corolla Cross Hybrid in June, but it does not appear to be for sale yet as of this writing.

The Corolla Cross is surprisingly spry and lightfooted, with very good chassis response and steering feel. A pleasant playfulness creeps out when you take a turn a bit faster because the car doesn’t feel like it carries a lot of weight in the corners, and thus brakes progressively and predictably. The result is a delightful little package that loves to ride its own momentum on curvy backroads. Around town, it’s smooth in traffic and a breeze to park. On the highway, it hums along agreeably, though you’ll find yourself speaking to other occupants at a slightly raised volume because of its less-than-cushy NVH properties. As with other Toyota products I’ve tested, the adaptive cruise control with lane-keep assist worked well and reduced driving fatigue on long-distance stretches.

Drivers and passengers alike will find good cabin space, with decent rear leg- and headroom. Outward visibility is quite good, as is the driver seating position. Trunk space is slightly sacrificed for people space, but in the event that you aren’t hauling extra folks, the seats fold down easily.

After a few unbroken hours behind the wheel, though, I did notice some butt discomfort—likely owing to a lack of support in the seat bottom—and my partner reported a stiff neck after some shuteye with the passenger seat tilted back. A top-notch nap was not had. And while I usually do not take issue with CVTs, it was a real dog of a ’box when paired with the otherwise spirited chassis and steering. Likewise, while the engine’s 169 hp and 150 lb-ft of torque were enough to get the car moving, acceleration still took a breath longer than most other cars I’ve tested in this segment (and the effort will be accompanied by loud engine yelling that fills the cabin as the four-cylinder really digs down within itself to summon the passing power). And when we loaded up the trunk with firewood from the garage to take up to the house, I could definitely feel the extra load. I hate to be That Car Reviewer, but the Corolla Cross could have used a little more power.

The Highs and Lows

“Uncomplicated” was never a word I thought I’d use to praise a car, but here we are. It truly feels like every new car has multiple settings and everything is customizable down to the very last strand of your DNA. But not the Corolla Cross. It is just plainly A Car. It has no driving modes, no paddle shifters, a good mix of touchscreen controls and buttons, and a basic interior layout. It does not reinvent the wheel whatsoever. There’s good ground clearance and optional all-wheel drive. When I get in it, I don’t need to relearn anything about it—or relearn anything about driving, for that matter—because it’s all been designed to be simple and straightforward. There’s a power to that.

Besides the underpowered engine and goopy transmission, the only other gripes I have with the Corolla Cross have to do with its infotainment screen. The test car came with the larger, eight-inch screen. But the infotainment was clunky to use and looked like it hailed from 2013 (though, this has been the case with every new Toyota I’ve driven in recent years, so it’s not exclusive to the Corolla Cross). Additionally, the image provided by the backup camera was of low resolution, which sometimes made spotting obstacles tricky.

In the subcompact crossover category, the Corolla Cross finds itself faced off with the Volkswagen Taos ($25,450), Honda HR-V ($24,895), Hyundai Kona ($25,095), Mazda CX-30 ($24,225), Chevy Trax (no 2023 price announced yet), and Subaru Crosstrek ($24,870). Of those, I can say the Taos is quite numbing to drive while the Crosstrek comes standard with AWD as well as a more powerful but optional turbocharged engine, which I think is worth the extra money. The HR-V and Trax are all newer than the Corolla Cross, and the CX-30 has an interior of far better quality.

When compared to the 2.0-liter Crosstrek and HR-V, the Corolla Cross just about matches the Subaru and is a little better than the Honda when it comes to fuel economy.

After looking at the options that came on the test car, I’d be floored if I found anyone willing to pay close to $33,000 for a Corolla Cross. That’s so much money for a subcompact crossover, especially when a Toyota RAV4—which is bigger, more powerful, and infinitely more popular—starts at $28,910. Unless you literally cannot fit the RAV4 in your designated parking area, it makes absolutely no sense to spend RAV4 money on a Corolla Cross. I can live without most creature comforts, but I need to have heated seats, and those only come on the top-grade XLE trim. Once you start optioning, you still wind up with a $29,000 car. I know because I just built one out on the configurator. No, I suspect the people who buy this car do it purely for budget and gas mileage reasons, which are both great reasons.

The Corolla Cross is sized like a CH-R with more headroom and is for people who don’t want to duck into a regular Corolla. It’s perfectly capable at its job and is reasonably fun in the corners. You just need to get it up to speed first, because it could use some more power. In a vacuum, it’s a perfectly adequate vehicle, but when faced off against competitors from Honda and Subaru, you’ll probably find something that does more for the same money.

Got a tip? Hit me up: [email protected]