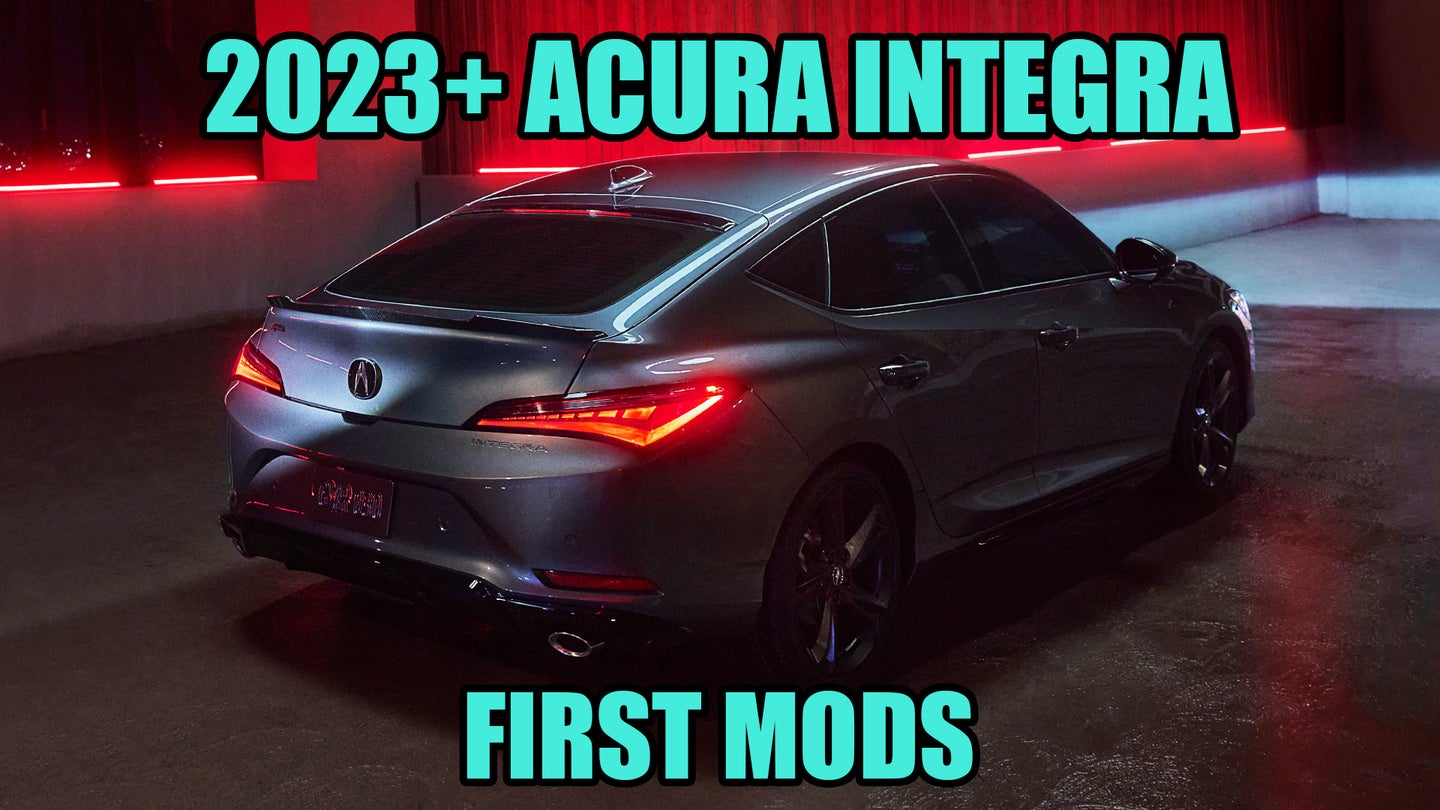 It’s nearly impossible to think of the Acura Integra and not recognize its legendary status as a tuner platform. Not only due to the Type R treatment that the DC2 generation received, but also how well it previous Integra iterations have taken to performance modifications and enthusiastic driving. Now that the 2023 Integra is really a thing, we’re eager to see how much more fun and performance the aftermarket can uncork from it.

While there have been some mixed opinions since its debut, but there’s no denying that the Integra’s close cousin, the 11th-gen Honda Civic Si, has the minerals to win the hearts and minds of this crowd thanks to its torquey turbocharged engine and fun chassis. Since that Civic already has a decent aftermarket supporting it we’re optimistic that the new Integra will also have tuning potential. To get some details on what that might look like, I reached out to a handful of companies and they got back to me with some exciting news.

From suspension tweaks to enhancing inputs and boosting power, there’s a lot to look forward to in this handsome new compact sedan.

Eibach offers a wide variety of suspension products for many makes, including Honda/Acura, and it seems like a lot of its employees are passionate about all forms of aftermarket tuning in general, too. Like Mark Krumme, Eibach North America’s Head of Marketing and proud DC2 Integra Type R owner.

“We definitely plan to have our full line of springs, sway bars, spacers and alignment parts for the vehicle,” Krumme shared. “Considering Acura’s design theory was to go back to the old ways of cross-model part compatibility, I would venture to guess, there are going to be some Civic parts that fit pretty well on there. That said, once we get our hands on it we’ll be developing parts which will best optimize the Integra and provide the performance improvements people expect from Eibach.”

Similar exciting stuff was shared by ACUiTY Instruments, a Louisiana-based outfit that specializes in immensely cool shifter components and other input-enhancing products for Hondas.

“We are actually working in collaboration with Team Honda Research West (THRW)  on the Integra that will be used for the 25 Hours of Thunderhill,” Co-founder Russell Garehan reports. Sidenote: THRW does a lot of R&D at this event and it’s really cool. “We are working with them on shifting and drivetrain upgrades. Our plan is to provide a retail shifter upgrade for the 11th Gen Civic and the new Integra. Our Civic shifters should become available late this year or early next year. 3D scanning of the new Civic’s interior actually happened last month, and that project is underway.”

When asked for his thoughts on compatibility, such as the potential for parts engineered for the 11th-gen Civic Si working on the new Integra, Garehan had some neat insight to share. “Many of Honda’s shifters look similar but are not cross-compatible. That said, we spend a lot of time 3D scanning and comparing OEM parts, and I’m seeing a trend at Honda to make designs more compatible across multiple applications. I think it’s likely a lot of parts already being developed for the 11th Gen Civics should fit the new Integras as well. We’ll know pretty soon; fingers crossed!”

He also had additional insight regarding how, despite Honda tuning has changed over the past 25 years, there’s still great stuff happening. “After getting our test 10th Gen Si back in 2017, we instantly fell in love with the new turbo motors Honda was producing, and it felt like Honda had put in the work to regain their fame in the enthusiast market,” Garehan detailed. “I feel exactly the same about the 11th Gen Civics, and while the masses seemed a little disappointed that the new Integra was not an exact replica of the DC2 Integra (although how could it be after 20 years of safety regulation and consumer demand changes), I love the 11th Si that I daily now, which tells me that the Integra should be a winner as well.”

All of this is exciting news, as is what some big names have in store for longitudinal G thrills.

It’s no secret to those in the know that Honda’s turbocharged L15 series of engines are potent and quite torquey for their modest 1500cc of displacement. Personally, I drove the 2021 model year Civic Si coupe and really dug the power level, but for those who want a little extra punch, their Earth Dreams (see what I did there?) can come true in the form of aftermarket ECU tuning.

Innovative MotorWorks (IMW) is a Pennsylvania-based tuner that specializes in squeezing extra power out of the Honda L15, and had some cool stuff to share. “I do plan to extend our support to the Integra model, provided the major players (like KTuner) come to the plate with hardware/software that allows us to do so,” Derek Robinson of IMW shared.

In regards to the compatibility of different Honda/Acura models, Robinson reports that “indeed, the driveline (and the entire car in general, from what I’ve seen) appears to be largely similar (if not identical) to the newest Civic models. I believe that most of what we know about the previous-generation Civic/Accord L15 and the current 11th generation Civic L15 engines will carry over into the Integra fairly easily.”

The L15 might not be like the high-revving, raucous B-series powerplants of yore, but Robinson affirms that there’s still a lot to like. “The L15 has proven to be a fun-to-drive platform while providing incredible fuel economy. While it’s a big departure from the high-flow, flat-torque Honda engines I grew up with, the newer big-torque turbocharged engines sure make for comfortable, fun daily use. With ECU calibration changes alone, we see large gains in midrange and top-end power/torque, retaining all factory hardware.

To get the scoop straight from the hardware and customizable software provider’s mouth, I spoke to Arizona-based Honda tuning authority KTuner LLC to see what its plans were. “We do plan on supporting the Integra once it is released into the wild,” a representative told me. “We do believe that Acura will stick largely with the same engine platform and electronics for engine control as the other 1.5T offerings. That means we will be able to extend some of our greatest features from other platforms over to the Integra line up as well. Our products are not application specific, so we expect our current hardware to work as soon as we release support in our software. Since they’re not application specific that also means any of our customers moving from a Civic or Accord to the Integra can migrate right over with their existing units once the support is available.

KTuner continued: “We’re very excited that the Honda and Acura brands have created a solid engine platform to work with and left room to not only safely improve upon the power output of these engines, but also stay well within emissions compliance while doing so. We are pending California Air Resources Board (CARB) approval for the current 1.5T line up of engines and are hoping to be able to extend that to cover the Integra as well.”

It appears that platform sharing has really come in clutch and made things easier on the aftermarket, especially when it comes to government compliance, as well as ease of research and development. Sport compact tuning will continue to be alive and well thanks in part to the L15-powered Acura Integra, which mirrors what the original generations meant to enthusiasts. And the aftermarket support for the new car we’ve just discussed proves that tuning isn’t just about nostalgia. The art and science of modding cars is clearly still alive in 2022.

The post 2023 Acura Integra: Here’s What Tuners Are Already Planning appeared first on The Drive.