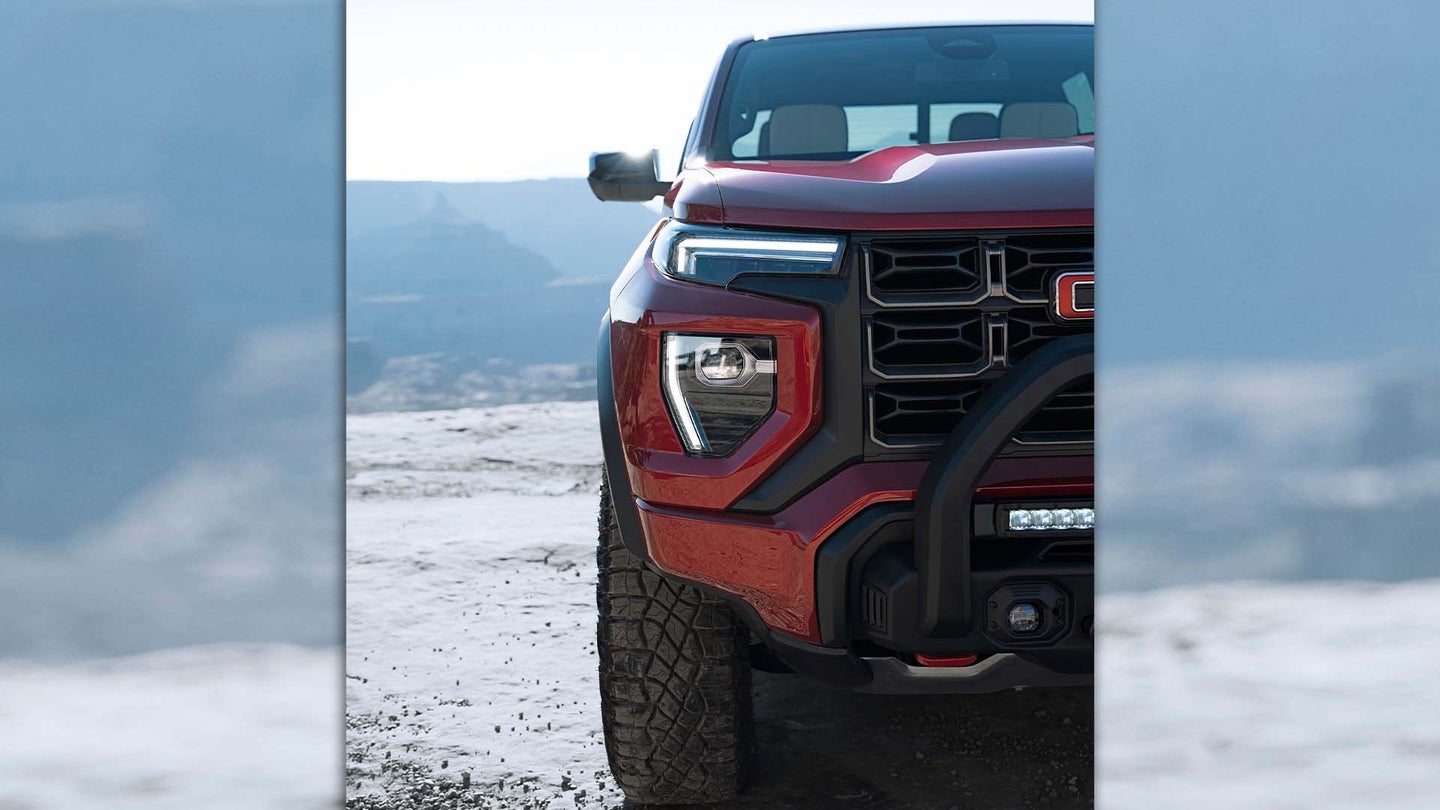 Now that we’ve seen the 2023 Chevy Colorado ZR2, it’s about time for the new GMC Canyon AT4X to drop. It’ll be all-new this year as the Canyon has never had an off-road variant this hardcore before, and we’ve already got a good idea of what it’ll be like. We’ll talk more about that in a second, but for now, let’s look at that front end design.

This is the second time GMC has teased the next-gen Canyon, but it gives away a lot more with this one. Rather than a shadowy side shot, we can see the truck’s LED layout as well as its grille and front bumper. It’s reminiscent of the full-size GMC Sierra with its angular daytime running light design; on the Canyon, though, it’s bisected by a body-colored panel.

Interestingly, it looks like there might also be an LED light bar mounted underneath the grille. It’s possible that the Canyon AT4X could get an accessory-heavy add-on package like the Colorado ZR2 Desert Boss as they seem to share a front Safari bar. Regardless, everything underneath the sheet metal is likely to be the same.

It’s almost certain that the 2023 Canyon lineup will exclusively feature General Motors’ 2.7-liter turbo four-cylinder. If it mirrors the Colorado like we expect it to, it’ll be available in three states of tune with the most capable one making 310 horsepower and 430 pound-feet of torque. That’s a healthy increase over the outgoing truck’s 3.6-liter V6 and, yes, even the beloved 2.8-liter turbodiesel.

The Canyon AT4X will rock a lifted suspension, Multimatic DSSV shocks, and Goodyear Wrangler tires, just like the Sierra AT4X. GM is really building out its truck lineups with these four-wheeling variants, and the midsize segment continues to grow. The trick will be differentiating the Canyon and Colorado enough for buyers to have a strong opinion one way or another.

The Chevy and GMC will look different on the outside, of course, but there’s also an opportunity for the latter to aim further upmarket with the Canyon’s interior. GMC is positioned as a more premium brand and its parent company has improved pretty much all of its truck cabins in the past year. The 2023 Colorado sets a fairly high mark to surpass, so we’ll see how the Canyon fares when it launches on August 11.

The post 2023 GMC Canyon AT4X Debuts Aug. 11 With a Face That Looks Like This appeared first on The Drive.