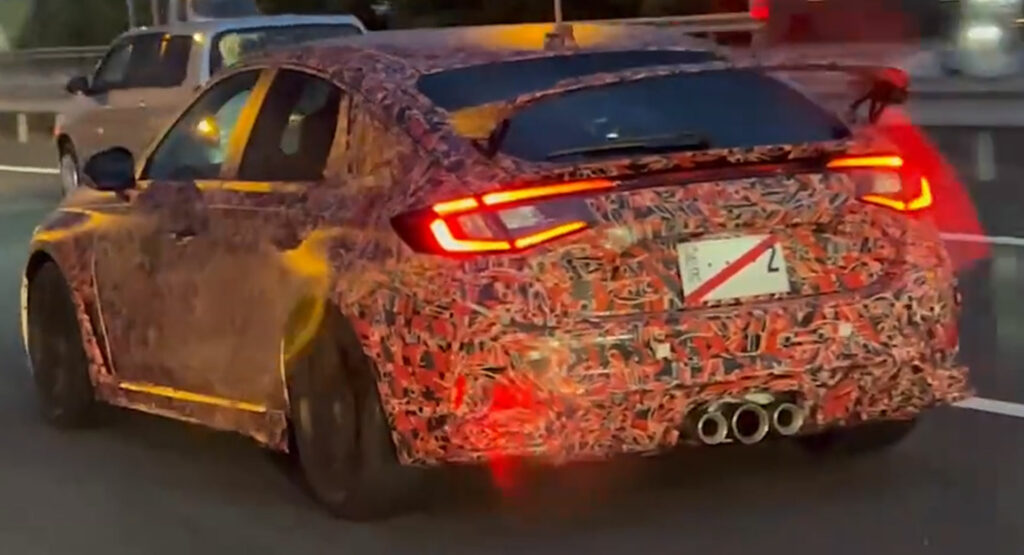 Two prototypes of the forthcoming 2023 Honda Civic Type R have been filmed on the move in Japan ahead of its expected debut later this year.

The Japanese car manufacturer has been testing the latest-generation Civic Type R for quite some time and a host of heavily-camouflage prototypes have been spied testing in recent months. These two prototypes were sporting the same skin-tight white and red camouflage as other recent testers, giving us a reasonable look at the car’s design.

To our eyes, the rear end of the outgoing Civic Type R was always the most controversial. We can see that the next model will undergo a dramatic styling overhaul and the rear will be slightly more restrained in its design. With that being said, we can see that it still features a large rear wing and three exhaust pipes.

Read Also: This Is Everything We Know About The 2023 Honda Civic Type-R

Other styling changes made over the standard Civic Hatch will include bespoke front and rear fascias and flared wheel arches. It will make a dramatic statement on the road and seems bound to be just the flagship hot hatch that the car manufacturer needs.

All signs point towards the new Civic Type R featuring an upgraded version of the 2.0-liter VTEC turbocharged four-cylinder as the outgoing model. This engine will deliver in excess of 310 hp and 309 lb-ft (420 Nm) and Honda will use the same trickery as the FK8 variant to virtually eliminate all signs of understeer.

Knowing how extraordinarily well the FK8 Civic Type R handles, it seems inevitable that the more advanced chassis of the 11th-generation Civic will dramatically improve the dynamics of the new Type R. It could force other car manufacturers building hot hatches to up their games.