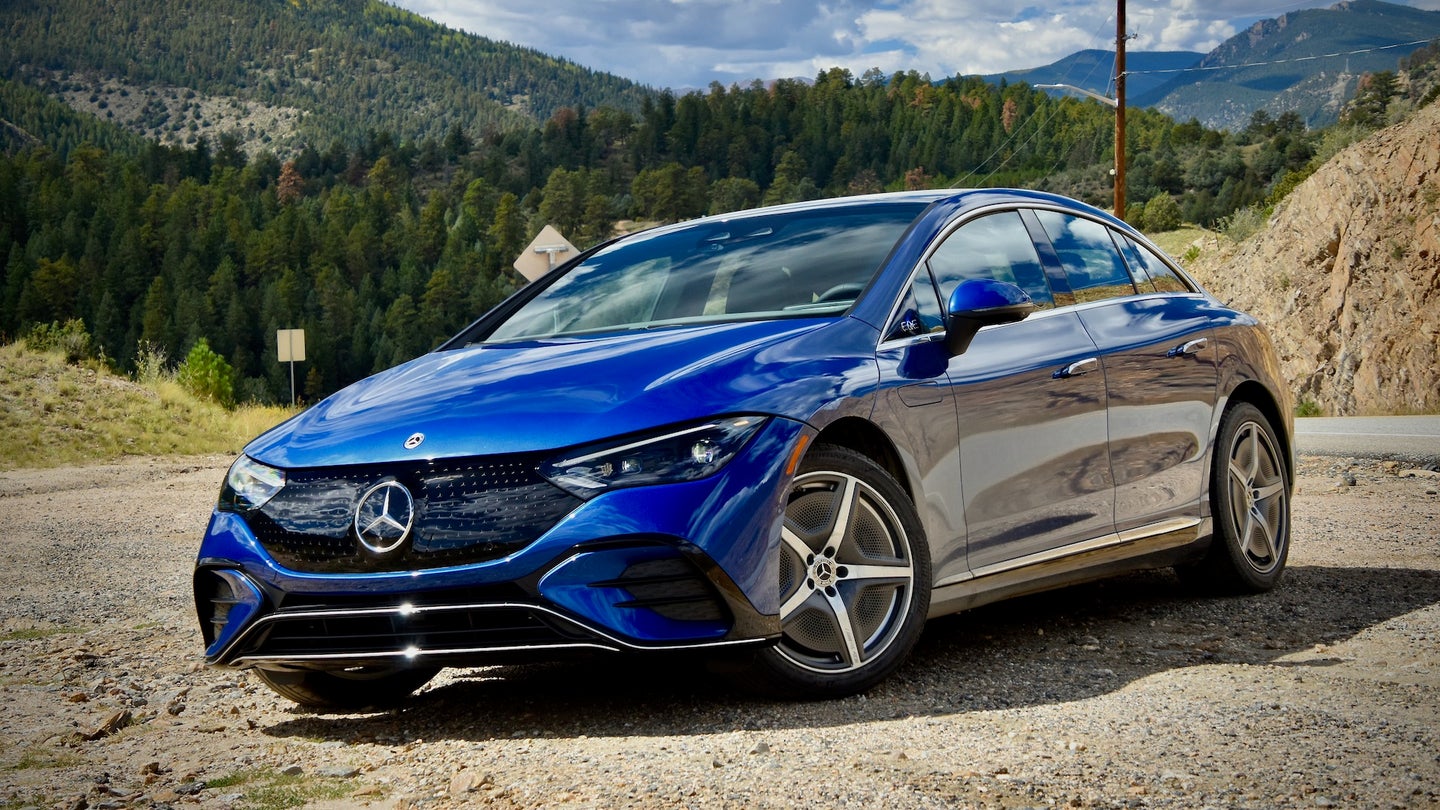 Mercedes’ buildout of its electric vehicle lineup necessitates something nicer than the EQB, yet more affordable than the EQS. That’s where the midsize 2023 Mercedes EQE comes in as the most affordable purpose-built EV so far from the world’s most iconic luxury carmaker. Its goal is simple: to provide most of the comforts of the EQS, but in a more economical package. And in a few hours’ test drive in my native Rocky Mountains, I found it offers just that.

The EQE is exactly what you’d expect of an electric Mercedes E-Class, with a quiet, comfy, and stylish interior, competitive range, and some seriously good driving automation technology. It’s not all worth shouting from the rooftops about, as the EQE’s exterior is kind of formless, its much-improved infotainment remains subpar, the door handles are confounding, and some driving dynamic refinements have clearly been left on the table.

But even together, they don’t quite amount to dealbreakers for this understated luxury EV.

Mercedes’ electric E-class equivalent is a midsize sedan with standard single-motor rear-wheel drive, available twin-motor all-wheel drive, and various optional upgrades to its comfort and performance. On that list are air suspension with adaptive damping and two tiers of rear-wheel steering to enhance agility and stability. Its floor houses a 90.6-kilowatt-hour battery that accepts up to 170 kW of DC fast-charging, which can take it from 10 to 80 percent charge in an advertised 32 minutes. Mercedes guarantees 70 percent residual charge after 10 years or 155,000 miles and includes two years of free public charging through Mercedes Me.

It’s What’s Inside That Counts

By sharing its platform with the EQS, the EQE takes a scaled-down version of its form, with (even) more ungainly proportions. Its short, sloping hood and stubby trunk give it the side profile of a Chevrolet Volt—not a bad-looking car, but not an all-time design great. There’s definitely some blob going on here. No complaints about its ocean-deep blue paint or aerodynamic wheels, though, let’s have more of them.

The interior is much more appealing, with a tasteful design, the build quality you expect of Mercedes, adequate space, and choice materials—mostly. Piano black on the center console gets grubby too easily and should be replaced by the optional magnolia or walnut trim with elegant aluminum inlays. I love its jet turbine-shaped vents and the woodgrain dash, textured metal in the door touch points, and suede-like material on the windowsills. Its seats are available in leather or convincing stand-ins, and are supportive and adequately bolstered, though they sit very high for a sedan, giving an unusually SUV-like driving position. This aids the EQE’s solid overall visibility, with the exception of the rear, where only a slit for a rear window shows what’s behind you.

Interior room is said to be marginally better than the current E-Class, which is to say generous overall. Rear legroom, in particular, shines, though as an average-height male, I didn’t have much headroom to spare. Storage space is plentiful, too, between two compartments in the center console, a walled cubby underneath, and sizable door pockets with cutouts for bottles. Air quality gets special attention with a HEPA filter in the HVAC system, an exterior air quality monitor can advise when to close the windows and sunroof, and a subtle background fragrance can waft through the vents from a cartridge in the glove box.

Positives and Negatives: The Tech

The EQE gets Mercedes’ new infotainment software MBUX, which is a huge step up from the OS in the AMG GT (RIP) and even the EQB crossover. It runs on an 8-core processor with 24 GB of RAM, making it even more powerful than a Sony Playstation 5. You’d never guess though, as the interface was at times slow to respond, and didn’t always load navigation directions on the first try. Despite the zero-layer interface philosophy, the screen is cluttered and many visual elements are too small to easily read while driving. Some are even partially obscured by the steering wheel with the optional 56-inch Hyperscreen. Also, the built-in navigation gave wrong directions on multiple occasions, leading to flustered detours.

This leads me to strongly recommend the car’s optional head-up display, which precludes the need to glance at the overstimulating screen, and advise against the Hyperscreen. (I can’t imagine what that gargantuan piece of glass would cost to replace, either.) At least the system has wireless Apple CarPlay and Android Auto, and is compatible with over-the-air updates that may let Mercedes rectify some of these problems. Hopefully, the automaker will do something about the door handles too, which pop out when you… Actually, I never figured out how to make them extend consistently.

By no means is all the tech a hassle, though, as all of the driving-focused gizmos were actually pretty impressive. In place of a tachometer, the EQE’s instrument cluster has a neat power-use gauge, which brought a smile to my face to peg at either 100 percent acceleration or regeneration. The EQE’s suite of automated driving assists will be of greater use, which, while not hands-off like GM’s Super Cruise, did a superb job of keeping the sedan centered in its lane. It maintained a safe following distance as traffic speeds varied, adjusted its own pace in response to road signs, and completed lane changes automatically when cued by the turn signal. Sadly, it doesn’t sound like the EQS’s hands-free Drive Pilot tech is coming to the EQE, but it’s an adept cruiser as-is.

The EQE I spent the most time in was the 500 4Matic, the highest-performing version until the eventual AMG model. It had the air suspension and adaptive damping, which hid the many imperfections of Colorado’s rough, frost-heaved mountain roads. Being an electric Mercedes, it was quiet at all speeds, with the loudest source of noise being the hum generated by flooring the throttle. The blast of 633 pound-feet of torque distributed through all four wheels made it quick yet stable, especially in conjunction with its rear-wheel steering.

While the pedals have clearly been programmed to smooth out clumsy inputs for comfort, the car went overboard with second-guessing me. It over-damped the throttle response both going on and coming off the accelerator, while the brake pedal retracted on its own under regeneration and responded differently in different modes. Jerky stops were commonplace despite my best efforts. I was told there’s a one-pedal mode in there (which I like) but wasn’t able to find it on my own.

The slack wasn’t entirely taken up in Sport mode, with mildly firmed up the suspension and stiffened the steering. Despite a lack of communication through the wheel and significant body roll, I enjoyed carrying the EQE 500’s nearly three-ton bulk through corners. Its low center of gravity and torque vectoring make it surprisingly willing to change direction, and it gives warning long before washing wide with a subtle squeal up front. There’s definitely some chassis refinement that’s been left on the table for the AMG, though owners will still find the EQE enjoyable.

No EPA range estimate is available yet, though various test cars gave their own estimates in the low-to-mid 300-mile neighborhood. I’d wager it ends up with at least 300, and no buts about it, that’s pretty dang good.

Pricing hasn’t yet been announced, either, though a Mercedes official told me to expect it to land around the CLS—which starts just under $73,000. That’d make the six-figure Audi E-Tron GT and Tesla Model S too pricey to be considered real competitors, while the cheaper BMW i4 and Tesla Model 3 are a size smaller. While the EQE’s upper trims likely encroach on the Porsche Taycan‘s territory, their differing emphases (Porsche’s concerns performance) makes them less direct competitors.

Really, you’d be cross-shopping the EQE against the Genesis Electrified G80 and Lucid Air. The Genesis frankly hands the EQE its ass when it comes to design, but having not driven one I can’t vouch for it beyond that. It’s only available in eight states right now, isn’t based on a dedicated EV architecture, lacks the same ADAS and bench-racing performance, and probably has both less range and a slightly higher price. The Lucid, on the other hand, justifies its higher starting price with a base range estimated to be over 400 miles, though that’s only a rear-wheel-drive model, and the company’s inexperience shows in its quality issues and supply limited by slow production ramp-up. That goes without mentioning how buying one benefits Saudi Arabia.

Mercedes claims to be taking its environmental impact seriously, and to that end says all its factories (including the EQE’s plant in Bremen, Germany) and rail logistics use purely renewable, CO2-free electricity. That goes for its battery plants, too, which use minerals Mercedes says come from audited, ethical sources to produce cells that’ll be up-cycled into grid storage after they’re past their useful life in cars.

Specific to the EQE, components with a total weight of over 165 pounds are made partly or entirely with recycled materials or renewable raw materials. In the case of the EQE’s body steel, it’s 100 percent recycled, which reduces the CO2 emissions associated with its manufacture by over 60 percent.

The 2023 Mercedes EQE sedan manages most of what makes the EQS a cocoon of luxury but in a smaller, more nimble, and more affordable package. Some of its tech is among the best in the industry, some lags behind, its exterior design isn’t glamorous, and the driving dynamics need work, but the EQE still comes together as a quiet, comfy, and classy luxury EV. Seeing as none of its competitors are widely available, yet, the EQE looks set to remain a suave sedan with no natural predators for the time being—and if one looms, Mercedes has time to ready a refresh.

The 2023 Mercedes EQE sedans will arrive in dealers this autumn.