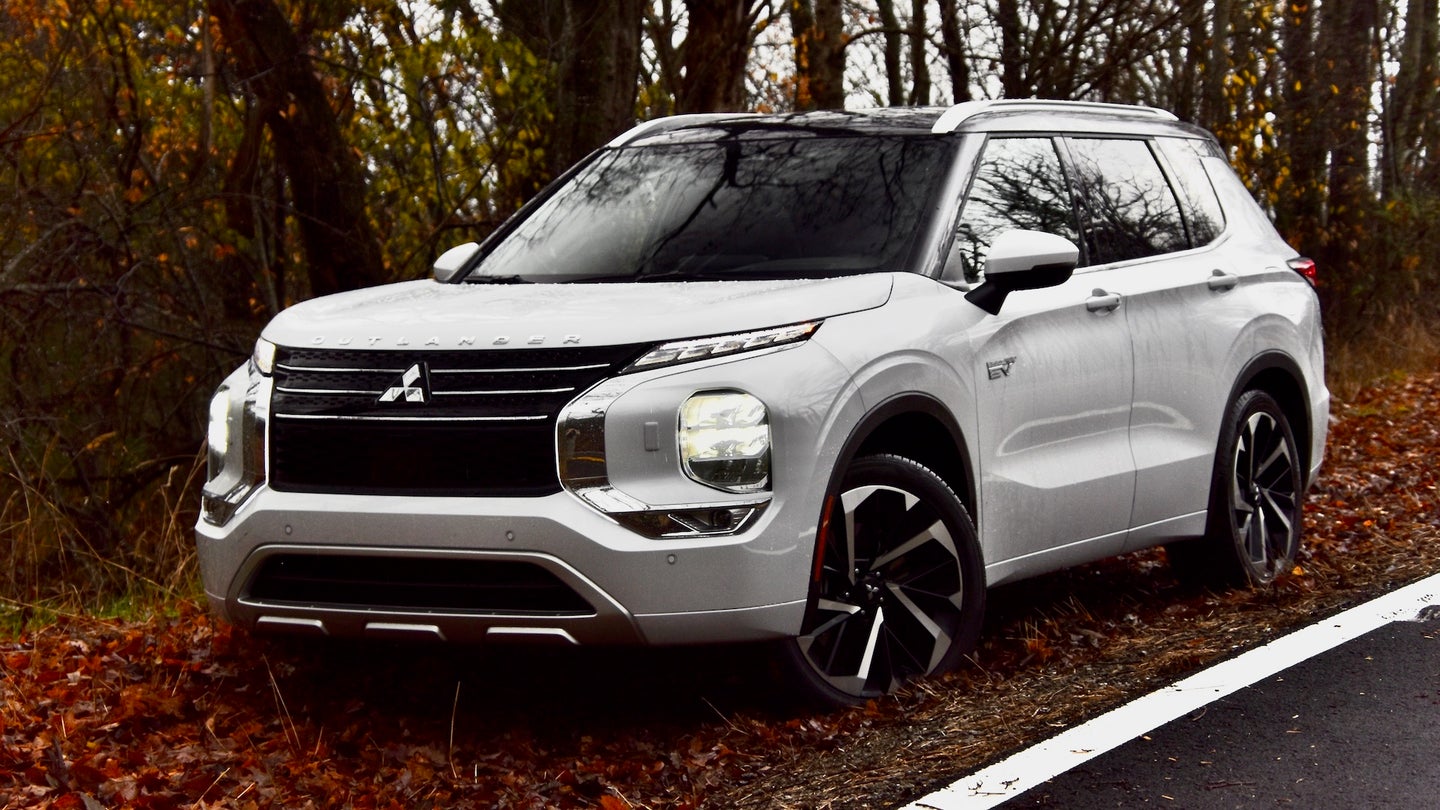 Mitsubishi is a name that probably hasn’t so much as crossed your mind in a hot minute. Once a mainstream contender with silver-screen action movie cred, Mitsubishi’s market share has eroded, and with it the vehicles people remembered it for. At times, it has looked like Mitsubishi might even call it quits in the United States. It’s a pivotal moment for this once-lauded carmaker, where it could either claw back some respect or fade away into a memory. Having driven the new 2023 Mitsubishi Outlander PHEV, I think we might be witnessing a turnaround.

People often forget this company has been ahead of the curve on electrification for well over a decade. It was mass-producing EVs in 2009, and brought out the U.S. market’s first plug-in hybrid SUV, the original Outlander PHEV, in 2013. Since then, its rivals have vindicated its electrification strategy by copying it years after the fact. Now, Mitsubishi might be giving us a glimpse of the future again with the second generation of the plug-in hybrid crossover that started it all.

The new Outlander is a well-executed vehicle that covers all the most important bases for an SUV. It’s quiet, comfortable, spacious, has a subtly brilliant plug-in hybrid drivetrain with above-average electric range, and a competitive warranty. Admittedly, some of its party pieces are of limited use, like its nanoscopic third row, pseudo one-pedal driving mode, and DC fast-charge capability, while some may find its allure limited by incohesive styling.

But y’know what? The Outlander plug-in hybrid impressed me, because it proved it could be trusted—both to make everyday driving relaxing and efficient, but also to handle whatever the road threw at it. And last I knew, that’s why people buy SUVs in the first place.

The 2023 Mitsubishi Outlander PHEV is the sequel to what is formerly the world’s best-selling plug-in hybrid SUV. Now based on the Nissan Rogue’s platform, it also borrows some interior parts—but this is no rebadge. It’s its own vehicle, with a unique PHEV powertrain that I could spend entirely too much time raving about. And I will.

A PHEV, in case you need it explained, is a hybrid with a battery big enough for it to drive medium distances on electric power alone. In this Mitsubishi’s case, it can travel up to 38 miles on a charge at speeds up to 83 mph, using not dino juice but its liquid-cooled, 20-kWh battery. It can charge directly off the combustion engine—an economical 2.4-liter Atkinson-cycle four-cylinder that also powers the front wheels through a CVT—or a DC fast charger. (It’s the only vehicle in its segment with that ability, though it should be pointed out that its CHAdeMO plug isn’t widely supported.)

In tandem with the ICE, the front wheels are powered by an 85-kW electric motor, while the rears are spun exclusively by a more powerful 100-kW unit. They’re synchronized by a software-based full-time four-wheel-drive system Mitsubishi calls Super All-Wheel Control, which originally debuted in the renowned Lancer Evolution X (RIP). Mitsubishi emphasizes that this is an EV-forward drivetrain; just one that has all the flexibility of an ICE. In theory, it’s an almost perfect middle ground between a typical PHEV and a range-extended EV such as the rotary-equipped Mazda MX-30.

Outside of that, it’s a fairly standard compact crossover, though unlike the last generation it also has a folding third-row seat. It’s a segment exclusive—understandably so since it’s too tight to be used in anything but a pinch.

Let’s get this out of the way: If there’s one place where the Outlander PHEV doesn’t measure up to its competition, it’s in the styling department. Its rear reminds me of the BMW iX, while its high beltline gives its side profile odd proportions, which are only highlighted by the large 20-inch aluminum wheels—unremarkable as designs go. Its front meanwhile makes me think of a Range Rover Evoque experiencing negative Gs; there’s something about the high, slim daytime running lights that makes the Outlander look like it’s getting a headrush.

Its interior is executed slightly better, with thoughtful storage options, and on the SEL Premium I tested, an abundance of choice semi-aniline leather. Some of it was a pleasing pumpkin color, with quilted stitching to match, and there was little in the way of plastic on the touch surfaces.

That said, some of the aluminum you touch is merely a coating over plastic, and there’s visible carryover from the Nissan Rogue that introduces a couple errant visual elements. There’s also a discordant set of glossy metallic pieces on the center console, dash, and steering wheel, which would look much better with a brushed finish to match the rest of the interior. The badge in particular would benefit from matching that pumpkin leather, though Mitsubishi corporate won’t hear it from what I’m told. Fortunately, build quality appears to be a non-concern.

I’m one of the most cynical people you’ll find when it comes to Branding™, but I don’t think Mitsubishi is tooting its own horn too loudly when it boasts about its Super All-Wheel Control four-wheel drive. In short, it uses a vast volume of sensory data to distribute motor torque and braking force, not just to achieve forward motion, but optimize stability and agility, too. It’s constantly adjusting to reduce superfluous driver inputs, which in turn reduces discomfort, fatigue, and the influence of adverse conditions such as crosswinds or slick surfaces.

Mitsubishi’s chief S-AWC engineer Kaoru Sawase, a patent-holding Ph.D. mechanical engineer, told me he considers it a more stable system than four-wheel steering. I came to understand his perspective during my brief test of the Outlander PHEV in rural Tennessee, which coincided with an absolute monsoon of a rainstorm.

Mitsubishi couldn’t have planned for a better real-world test of the Outlander PHEV’s 4WD than letting me loose on a day with widespread flooding. The rain was so heavy that I didn’t even see the pool submerging the road until I was plunging into it at highway speed, splashing water high enough to douse an NBA center. I’m not completely certain we were hydroplaning, but most cars become hard to control in situations like this; the Outlander stayed arrow-straight, poised, still responsive to my inputs. It was almost like there wasn’t any standing water at all.

S-AWC impressed again when we left the tarmac to play in some boot-sucking mud, easing the heavy Outlander out of what I’d consider impassable in some lesser crossovers—all with regular on-road tires. On a closed handling course, the Outlander proved more predictable, stable, and responsive than I’d have ever expected of a heavy hybrid SUV like this. It’s calibrated for stability, but it wasn’t at all stubborn about changing directions for emergency maneuvers.

The Outlander PHEV has what Mitsubishi calls an “Innovative Pedal” mode, meant to work similar to many EVs’ one-pedal mode, but with the crawl many people expect of automatic transmissions. I didn’t like the feel of it, but I spoke to others who did, so YMMV. Owing to its electric-first drivetrain, the Outlander PHEV’s throttle response is uncharacteristically good for a vehicle with a CVT: its motors step up while the ICE reacts to throttle demand.

The pleasantries don’t just belong to the driver either, as the ride quality proved so good that I slowed down to see if the cracked back roads were as bad as they looked. Its eight-way adjustable seat (with massage function!) had almost the ideal amount of bolstering and commendable spinal support, while the first and second rows (the latter can split 40/20/40) were particularly spacious.

Double-paned windows minimized wind noise, while road noise was present but not overwhelming. Its sound system didn’t miss a beat playing the most extreme symphonic metal in my library, though the infotainment system it’s attached to won’t set any industry standards. It had wireless Apple CarPlay and Android Auto, but was a bit slow to respond. It does deserve props for keeping the screen small though, rather than following the big-screen fad, and for including a HUD with traffic sign recognition. It even adjusted the cruise control’s setting to new speed limits as we passed them.

The 2023 Mitsubishi Outlander PHEV starts at $41,190 delivered, and reaches $51,340 on its top 40th Anniversary trim. At the top end, it starts to intrude into the territory of the Chrysler Pacifica Hybrid, a true three-row but also a completely different class and size of vehicle. The Mitsubishi is more closely matched with its compact plug-in hybrid crossover rivals, the Hyundai Tucson PHEV, Kia Sportage PHEV, and Toyota RAV4 Prime.

It has the second-most electric range and highest price behind the Toyota, the Hyundai being cheapest by a large margin. The Mitsubishi easily has the most max cargo space and payload capacity, while cargo space behind the second row is pretty much even across the board, and ground clearance is identical at 8.3 inches. Note, however, that only the Mitsubishi and Toyota offer a 120-volt outlet in the cargo area.

The 302-hp Toyota claims the horsepower crown, Mitsubishi having the least, though the Outlander has the highest published torque output, at 332 lb-ft. Despite that, it has the lowest towing capacity of the four, and is the heaviest by nearly 400 pounds. Real-world fuel economy data isn’t available, but that may be why the Mitsubishi has the lowest mpge rating of the four. At least it has a spectacular warranty along with the Koreans—10 years and 100,000 miles on the powertrain, five years and 60,000-mile limited vehicle warranty, with unlimited roadside assistance in that time. Toyota falls short in this regard.

While EVs get the bulk of the praise when it comes to decarbonizing the auto industry, PHEVs represent a more efficient solution when battery supplies are limited—and shortages are looming according to Time. With significant electric range, the Outlander stands to greatly reduce owners’ gasoline consumption over short distances and on regular commutes, all with a small battery pack compared to what’s used in most EVs.

Additionally, the plant in Okazaki, Japan where it’s made has a large rooftop solar installation and onsite power backups that repurpose end-of-life EV batteries. It’s on track for three gigawatt-hours of annual power production, which will reduce site carbon emissions by 1,600 tons annually.

The 2023 Mitsubishi Outlander PHEV is not at all what you’d expect of a company that’s sometimes spoken about as if it’s on the ropes. Between the stand-out performance of its 4WD system, best-in-class payload and cargo space, and despite its pinch of a third row, it’s effectively the most capable of the compact plug-in hybrid SUVs. On top of that, its warranty speaks to Mitsubishi’s confidence that it has built a dependable vehicle. Its competitive electric range stands to reduce cost of ownership, which its driving dynamics and comfort will make a pleasant experience for drivers and passengers alike.

Going into this drive, I was ready to bear bad news. It’s clear the Outlander PHEV has weak points, but they’re not in the places that’d make this SUV a no-go. Honestly, the Outlander PHEV kinda excites me, because it’s a good omen of what’s to come.

Mitsubishi’s racing division Ralliart is back (and winning), there’s impetus for future performance models, and there’s already a radical high-performance Outlander off-roader in testing. I won’t go as far as saying the Outlander PHEV proves Mitsubishi’s back or anything, but it’s a promising start.