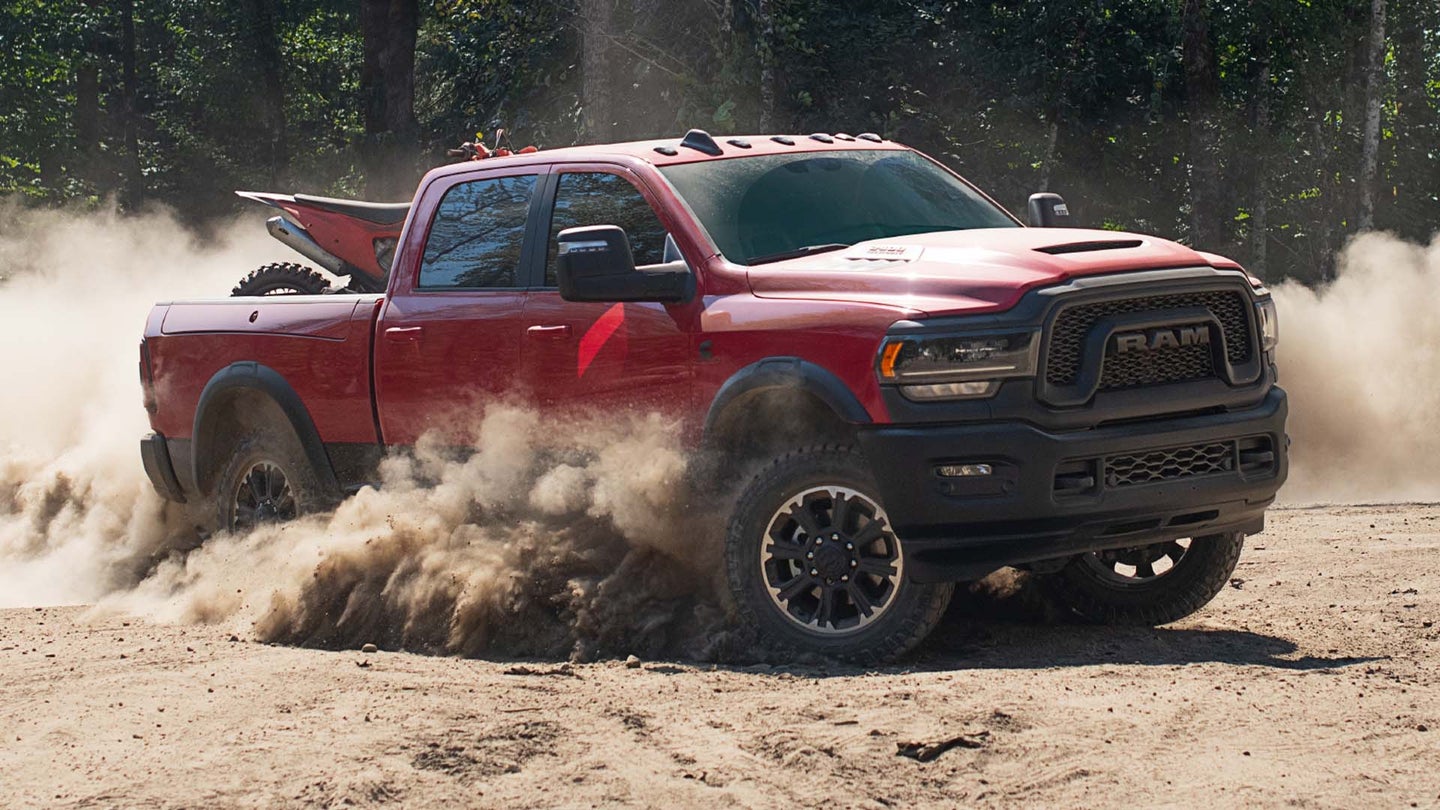 The 2023 Ram 2500 HD Rebel carves out a new slot in the automaker’s off-road truck lineup, and it’s noteworthy for its available 6.7-liter Cummins diesel. It’s not quite as capable off-road as a Ram Power Wagon but it can still tow up to 16,870 pounds, which is three tons more than its exclusively Hemi V8-powered stablemate can. Think of it more as a competitor to the Ford F-250 Tremor, then, with most of the four-wheeling goodies you love and even more of the work capability.

The 2500 HD Rebel borrows a lot of styling cues from its half-ton sibling. The black front fascia is especially familiar with an identical front grille, and the cladding carries to the fender flares and underbody. It also rides on 33-inch Goodyear Wrangler tires, which are the same size as what you’ll find on the other Rebel, just with thicker tread to handle the increased weight and work capacities.

While it comes standard with the 6.4-liter gas V8, it can be optioned with the Cummins diesel straight-six that makes 370 horsepower and 850 pound-feet of torque in this application. That’s arguably the biggest draw here as now you can get the compression-ignition lump in a truck that offers a locking rear differential and a ton of skid plates. Again, it doesn’t have all the 4×4 features that the Power Wagon does, but it’s a solid start.

Since it’s built on the Ram 2500 instead of the one-ton 3500, the HD Rebel makes use of a five-link coil spring rear suspension with optional air bags. That allows for solid articulation, although Ram hasn’t given specific numbers for suspension travel and the like. Importantly, the HD Rebel does not have a disconnecting sway bar up front, which is one of the Power Wagon’s greatest party tricks that’s actually useful, too. Likewise, it’s missing a front locking differential.

You can see why it’s more of a rival to the Ford F-250 Tremor than anything. This Ram model is its own trim rather than a package, however, and it slots between the Laramie and Power Wagon. It’s likely that the Chevy Silverado HD ZR2 will play in this same space when it drops next year, so expect to see yet another tightly contested truck segment occupied by Detroit’s Big Three.

The post 2023 Ram 2500 HD Rebel Isn’t Quite a Diesel Power Wagon, But It’s Close appeared first on The Drive.