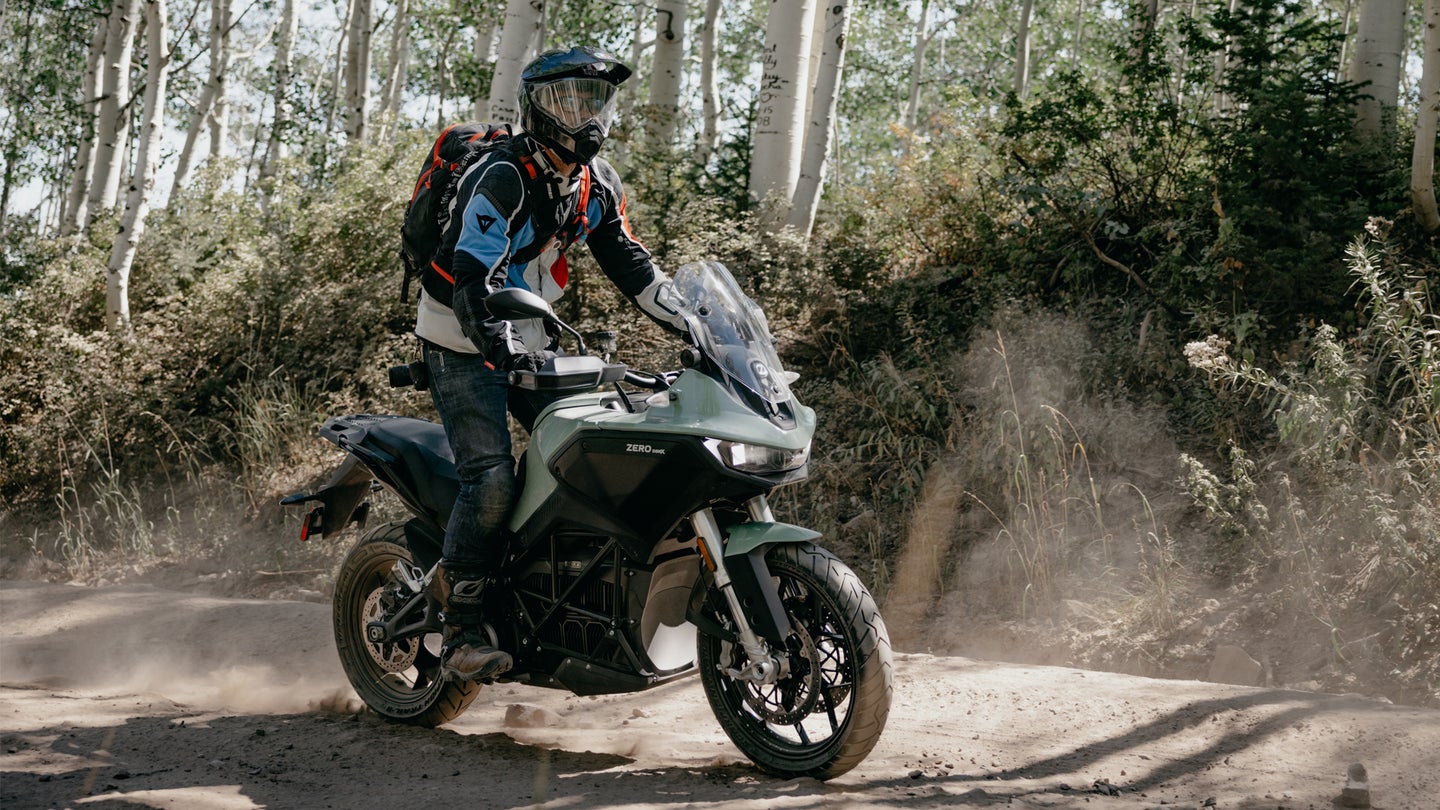 I separate the wilderness into two categories: nearby and way the hell out there. Nearby is for your day trekkers, your weekend warriors, and those folks who put a few off-road miles on their machines and set up camp for a night. Nearby is still the outdoors, but you’re never too far away from a gas station burrito.

But what I want and yearn for is Way the Hell Out There-land. I want dark woods, deep rivers, desolate deserts, and nonexistent cell service. Land that’s far into the wilderness and miles from any human being. I want locations only accessible by a very long and arduous hike, or the best mode of backwoods transportation: an adventure motorcycle.

Adventure motorcycles promise to deliver me somewhere remote, untouched, and uninhabited. They do so with off-road tires and suspension, ample payloads for all your camping gear, and enough power to get you through the toughest mud pits. But most of all, they have plenty of range to get you to hell and back, as it often takes a good amount of miles to get you far and away. Given concerns around the range of electric vehicles, it may seem disingenuous—if not even dangerous—to trust your wilderness survival to an electric motorcycle.

And even after falling for the dirtbike-like Zero FX, and never really experiencing range anxiety there, a proper electric adventure motorcycle that can compete with the best of KTM, Ducati, Yamaha, and Honda still felt ages away. But California-based EV bike startup Zero doesn’t adhere to that idea—and now neither do I after being introduced to the new 2023 Zero DSR/X, the first all-electric adventure motorcycle that seems to have what it takes to go after those big dogs.

We’ve Got the Range

Beneath the DSR/X’s handsome bodywork sits a 17.3-kWh battery—the largest battery in Zero’s lineup—connected to the brand’s Z-Force 75-10X motor. The pairing is good for 100 horsepower and a body-clenching 166 pound-feet of torque, which is more than the supercharged Kawasaki H2R that offers a measly 121 lb-ft.

Not only does that big battery pack give the DSR/X solid performance, but also what I believe is the right amount of range. According to the brand, the DSR/X’s battery offers 180 city miles, but that drops to just 85 miles on the highway. My experience with the FX says that number is conservative: Given our ride route was around 60 miles, we returned with a little more than 65 percent range remaining, so you’ll likely get around 95 to 120 miles. Still, you need to use the highway to get just about anywhere fun.

Interestingly, Zero actually developed a measurement for off-road mileage for the DSR/X. Granted, it’s Zero’s own testing cycle, so take it with a grain of salt, but the company states that the DSR/X is good for 200 miles of off-road use with a non-aggressive rider, while one like Zero’s own chief test rider Trevor Doniak, or photographer and hard enduro rider Jenny Linquist, cut that figure by 50 miles.

You get five factory-tuned ride modes (Eco, Sport, Rain, Standard, and Canyon) and a new Bosch traction and stability control unit to help keep all that torque from tearing a hole in the space-time continuum. Dual J-Juan four-piston calipers and 320mm rotors on the front arrest the motorcycle’s forward momentum, while Showa shocks are employed both front and rear and give the motorcycle 7.4-inches of travel. There are also two new features to Zero’s proprietary Cypher operating system that make everyday life that much more livable: Park Mode and Vehicle Hold Mode.

Vehicle Hold Mode is something Zero’s motorcycles have needed forever. Most motorcycles can be locked in place on an incline by just throwing the bike into gear. That’s not the case with an electric motorcycle, but Vehicle Hold Mode lets you. Just clamp down on the front brake lever and it’ll lock the rear brake for about three minutes. A twist of the throttle releases the hold.

Park Mode, however, is where it’s at.

Adventure motorcycles are heavy and the DSR/X is no different, with a curb weight of 544 pounds. That’s not too far off the Honda Africa Twin’s 522 pounds or KTM’s 1290 Super Adventure R’s 539 pounds. Moving all that mass, especially in the dirt, can be an absolute pain in the thighs, but Zero’s ECU lets the DSR/X reverse or crawl forward in Park Mode. Speaking from a dirt rider’s perspective, there are times when you’re on a hill and the nose of the bike is pointed down but you need to reverse. You have to get off the bike and literally drag it backward. It sucks, but not with the DSR/X. A quick toggle to Park Mode and you’re reversing like a champ.

There’s also a standard adjustable windshield that features a knurled aluminum knob and integrated detents for easy on-the-move changes. Zero also took the chief complaint of the ruggedness of its carbon fiber belt drive to heart.

Many, including myself, have had issues with the brand’s belt longevity. But because it reduces overall NVH to near zero, Zero has stuck with it and offers a chain kit as an accessory. To help reduce concerns, the DSR/X not only receives a thicker 25mm belt compared to the 22mm standard through Zero’s lineup, but the company also incorporated a new rear sprocket design that features extraction holes within the teeth to help cut the chance of dirt, rocks, and foliage from building up and snapping the belt.

But how do all of these specifications and parts coalesce?

The first stage of our ride went through Park City’s downtown, up into the surrounding mountains, and then down a twisting, aspen-lined canyon road that’s host to off-camber switchbacks and quick back and forths. It’s a solid showcase as, though you might expect an adventure motorcycle to be more at home in dirt, the vast majority of full-size ADVs are more cruisers than single-track trailblazers.

While competitors like Ducati’s Multistrada V4 S have adaptive suspension, the DSR/X’s static—but adjustable—Showa setup deftly glided over every bump and undulation. It felt super composed. I could easily imagine putting hours behind the bars without getting tired. But this motorcycle has multiple personalities and the one that truly surprised me was its sporting persona.

Bikes like KTM’s 1290 Super Adventure R, the aforementioned Ducati, and BMW R1250 GS Adventure can be hucked around on canyon roads, but they don’t like it, and you’ll quickly find their limits. The DSR/X can hang with the sport bikes when given the chance.

As our party climbed through the mountains, Zero’s test rider and I notched up the pace and switched from an easy cruise to an all-out attack. And what struck me was how similar pushing the DSR/X was to my experience with the all-electric Harley-Davidson LiveWire. Because the motorcycle’s weight (battery, motor) is so low, it never feels as if you’re throwing around 500 pounds of steel. It dances like a motorcycle 100 or more pounds lighter, dragging its pegs and your knee in each corner’s apex.

Unlike the LiveWire, that weight doesn’t violently materialize under braking. It’s there, but it doesn’t cause the sensation that it’s going to continue its momentum no matter what, just as the LiveWire did. Partly thanks to the J-Juan brakes, but also because Canyon mode gives the rider full power and torque, and Eco’s full regenerative braking. It was my favorite setting of the day.

But Can It Actually Adventure?

Though most will keep it as a cruiser, its purpose is an adventure machine, and people will take it off-road. To show off the DSR/X’s capabilities and setup, we ventured to an off-road trail that climbs into conifer forests by way of an off-road trail I’ve frequented. But here’s my only real complaint of the day. It doesn’t have anything to do with the motorcycle specifically, but the way in which the DSR/X was handed over to me.

It was fitted with the wrong tires.

Northern Utah’s dirt is the consistency of very fine Tipo 00 flour. Combine that with granite boulders the size of small loaves of bread, along with the errant fallen tree limb, and the Pirelli Scorpion 2 tires fitted to the DSR/X aren’t the right rubber for this route.

Though Pirelli says the Scorpion 2s are dual-sport tires, they absolutely aren’t. They’re road tires with slightly deeper sipes. And while the DSR/X’s capabilities—and a very steady throttle hand—made riding only minorly sketchy, it wasn’t the confidence-inspiring tale I wanted, given how adept this motorcycle feels everywhere else. Zero has other tires to work with though, including the more dual-sport Pirelli Scorpion MT90 AT that comes with the FX and the optional Pirelli STR Rally tires the company showed off on a DSR/X at the event.

Either of those tires would’ve transformed this motorcycle and highlighted its more adventurous side. Instead, I went as quick as I dared but didn’t feel as comfortable as I would’ve liked given the enormity of torque available beneath my palm.

I did find that the suspension damping could’ve been better. While it was fine on the street, the shocks were working harder through rougher washboard terrain. The shocks are adjustable, however.

Zero’s engineers didn’t miss a beat with the DSR/X, delivering a solid adventure motorcycle that could be put up against and compared to the mainstays of the full-size ADV market. Including price.

Would it win in a straight-up comparison with those others? I’m not sure. Those motorcycles have been around for a lot longer and have everything dialed. It’d be a knife fight, but my instinct says it would be much closer than most would anticipate.

The DSR/X is also launching with the right range, and that’s before you add the optional Power Tank for added mileage. Here’s an electric motorcycle that’ll go just as far as most gas bikes and charge just as fast as most electric cars thanks to Level 2 charging.

Zero’s DSR/X doesn’t feel like an “electric adventure motorcycle,” but just an adventure motorcycle I’d take way the hell out there. Not only does it do all the necessary things an ADV needs to, but there’s also just something about exploring the wilderness in silence that makes the motorcycling experience better. It immerses you in the world around you.

I can’t wait to get it truly out into the woods.

Got a question for the author? Hit me up: [email protected]