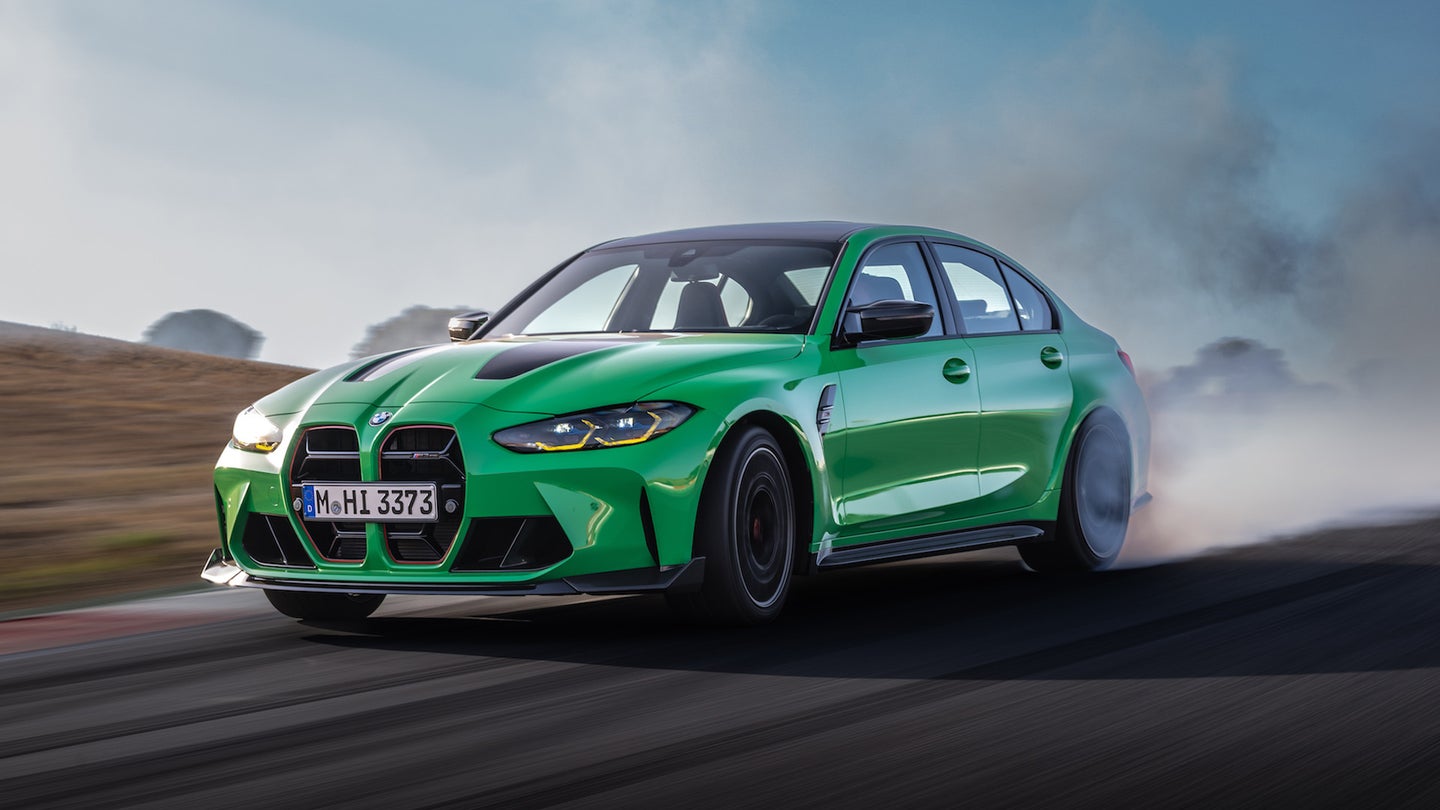 The newest member of the legendary Competition Sport family has arrived: The 2024 BMW M3 CS. It packs a 3.0-liter twin-turbo inline-six with 543 horsepower and 479 pound-feet of torque. That’s an increase of 70 horsepower over the standard M3 and 40 hp over the M3 Competition. Its repertoire of skills includes blitzing backroads, romping road courses, and doing zero to 60 mph in just 3.2 seconds—quite impressive for weighing nearly 4,000 pounds.

Like all CS cars, the new model will be produced at BMW Group Plant Munich in limited numbers. While production will start in March of this year, no specific on-sale date was offered regarding units destined for the United States. Pricing, however, was revealed, and picking up one of these feisty Ms will set you back $119,695, including a $995 destination fee.

With that painful bit out of the way, let’s look at some of the goodies that make the 2024 BMW M3 CS worthy of its price tag, if such a thing is even possible.

With a moniker like CS, you can expect some pretty dramatic styling, and the new model doesn’t disappoint. Everything is amped up in the CS, with more aggressive looks courtesy of a frameless kidney grille, intake channels running the length of the hood, and, of course, angular yellow DRLs instead of white for that GT racing effect. Paint colors include Brooklyn Grey metallic, Black Sapphire metallic, and BMW Individual Signal Green, plus Individual Frozen Solid White metallic, which is exclusive to the M3 CS.

As expected in a car of this caliber, there’s plenty of CFRP, or “carbon fiber reinforced plastics” inside and out. As for the exterior, you’ll see it in the roof, hood, front splitter, front air intakes, side mirror, rear diffuser, and rear spoiler. Just with these bits alone, BMW claims it was able to shave about 75 pounds thanks to the lightweight material.

The wild-looking M Carbon bucket seats are the focal point of the cabin, and they look like they’ve come straight out of a racing car. Thankfully, though, these are fully electric and also heated, and even feature illuminated CS badges on the integrated headrests. The seats are wrapped in Merino leather with a black and red design, which features unique stitching and M tricolor stitching in the seatbelts. An M steering wheel finished in CFRP and Alcantara with shift paddles is also standard.

iDrive 8 also makes an appearance in the CS, featuring a brand-new 12.3-inch curved display. Combined with a control display, the curved screen real estate in the cabin measures 14.9 inches.

Body and chassis rigidity are also crucial for on-track performance, so BMW added “high-precision” strut braces made from cast aluminum in the engine bay. These connect the strut towers to the front end, helping things keep balanced during dynamic driving. Trim-specific wheel camber settings, electronically controlled dampers, and anti-roll bars also aid in the handling department, in addition to the M-rated brakes that can be had with red or black calipers. Carbon ceramic brakes are not standard, though they are optional and can be had in red and gold colors.

Lastly, the M3 CS features 19-inch wheels up front and 20-inchers out back that come wrapped in “conventional high-performance tires,” the press release specifies. However, BMW will upgrade the rubber to 275/35ZR19 and 285/30ZR20 Michelin Pilot Cup Sport 2 tires at no cost should the owner request them.

The heart of the BMW M3 CS is its twin-turbo 3.0-liter inline-six engine, which as I mentioned before, pumps out 543 horsepower and 479 pound-feet of torque thanks to raised boost pressure and other ECU tuning. The motorsport-tested mill is paired with an eight-speed M Steptronic dual-clutch transmission, high-performance all-wheel drive (M xDrive), and a rear-biased, fully variable differential (Active M Diff).

Drivers can customize their setup by choosing between 4WD, 4WD Sport, or fully deactivating the system and opting for 2WD mode. Furthermore, the system will allow Dynamic Stability Control to be switched off in order to send all the power exclusively to the rear wheels. As the press release claims, “skilled drivers are free to explore their limits.” Keyword being “skilled,” so please don’t wrap yourself around a pole, or even worse, hurt an innocent bystander.

Oh, and the car is electronically limited to 188 mph.

If you like how all of this sounds, make sure to let your BMW dealer know right away. Chances are there’s already a long waiting list for a new M3 CS. Worst case scenario, you’ll have to buy one off someone who overpaid—kinda like this scalper did with a Honda Civic Type R.