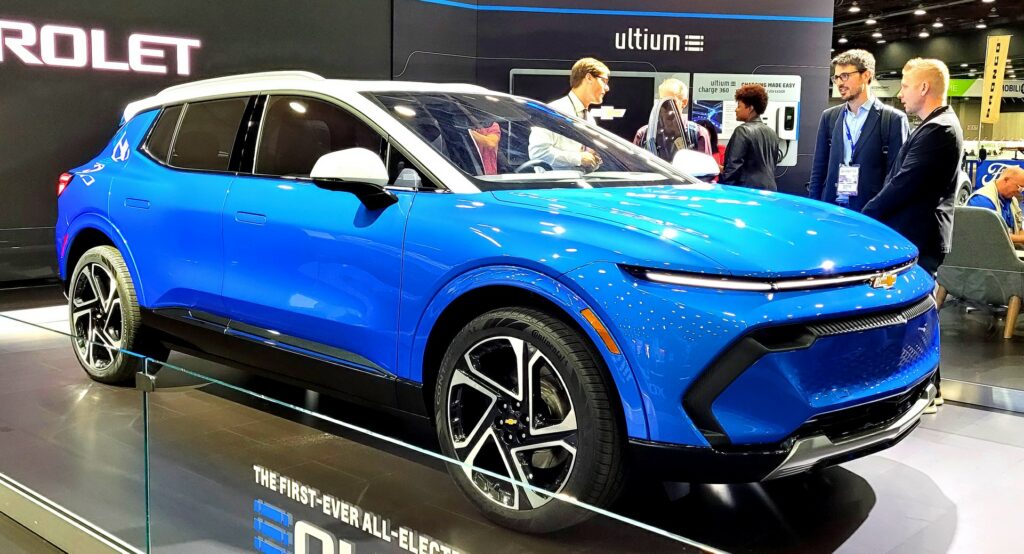 This story has been updated with live photos of the Chevrolet Equinox EV from the 2022 North American International Auto Show in Detroit. (9/14/2022)

Compromise. No one wants it, but it’s been the name of the game for affordable EVs as consumers have typically been forced to buy dull hatchbacks.

While there are some interesting options, they make plenty of compromises of their own. For example, the MINI Cooper SE boasts a dreadful range of 114 miles (183 km) and it’s a similar story with the 100 mile (161 km) Mazda MX-30.

Chevrolet is now eliminating the tradeoffs with the 2024 Equinox EV, which offers a range of up to 300 miles (483 km). The crossover also promises to be spacious, high-tech, and affordable thanks to a base price of around $30,000.

Chevrolet released the first pictures of the Equinox EV in January and we’re still blown away by its stylish design. During a press briefing last month, designers described it as “Americana cool” and noted aerodynamics played an important role in the crossover’s “less is more” design.

This is immediately apparent up front as the crossover has an angular fascia with slender lighting units that can be connected by an available LED light bar. While the latter is limited to higher-end versions, all buyers will find a “walk-up” lighting sequence with animations front and back.

Another standout feature is the flush-mounted door handles, which are a rarity at this price point. Besides helping to improve aerodynamics, they give the crossover a streamlined design and a premium appearance.

Proportions also play a key role and Chevrolet noted the model is lower, longer, and wider than its ICE-powered counterpart. Besides being bigger, the crossover rides on standard 19-inch alloy wheels. Higher-end variants up the ante with 20- and 21-inch wheels, which are aerodynamically optimized.

Other notable styling features include a unique look for RS variants. Chevrolet didn’t detail the changes, but buyers will find a black front fascia and an available black roof. Speaking of the latter, the 2LT can be equipped with a contrasting white roof.

A Techy Interior With Upscale Amenities 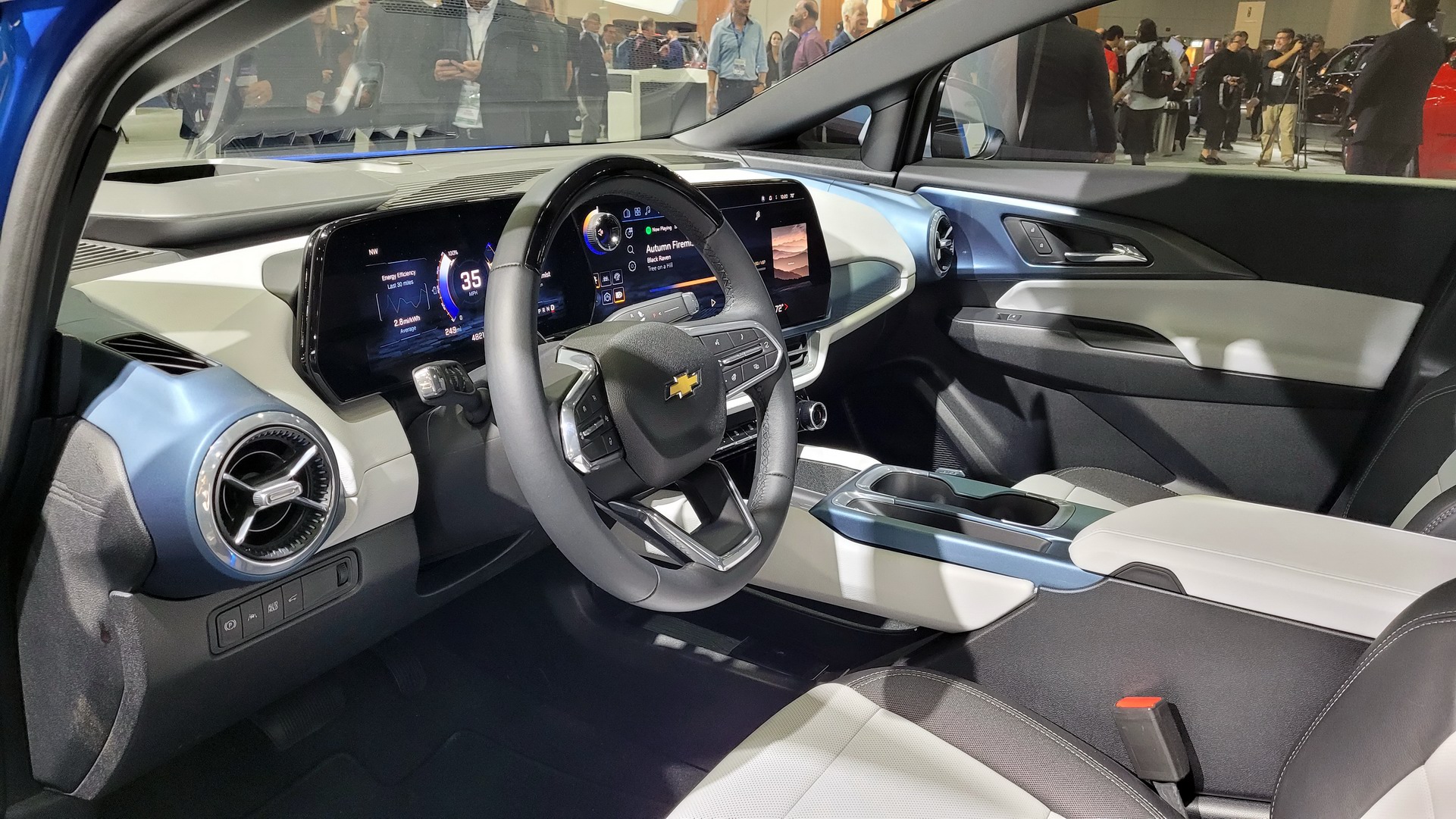 Chevrolet has been making great strides in terms of interior design and the Equinox EV continues this effort with a modern cabin that comes standard with an 11-inch digital instrument cluster as well as an 11-inch infotainment system.

The 1LT trim also has a floating center console, metallic accents, and circular air vents. They’re joined by cloth seats and plenty of hard plastics. While the latter are to be expected at this price point, the cabin promises to be spacious and Chevrolet noted the crossover will offer up to 57 cubic feet (1,614 liters) of cargo room. Unfortunately, that’s it as the model doesn’t have a frunk.

Moving up the trim ladder, the 2LT adds a heated steering wheel, heated front seats, and eight-way power adjustment on the driver’s side. The model can also be equipped with an optional 17.7-inch infotainment system, which is shared with the Blazer EV. The 2RS is largely identical, but it features a heated flat-bottom steering wheel as well as sportier upholstery.

The 3LT and 3RS are more luxurious as they have heated and ventilated front seats, heated rear seats, and a six-way power passenger seat. Buyers will also find a heated steering wheel, a dual-zone climate control system, and a standard 17.7-inch infotainment system. Other highlights include a presence-based power liftgate, while a sunroof and a Bose audio system are optional. 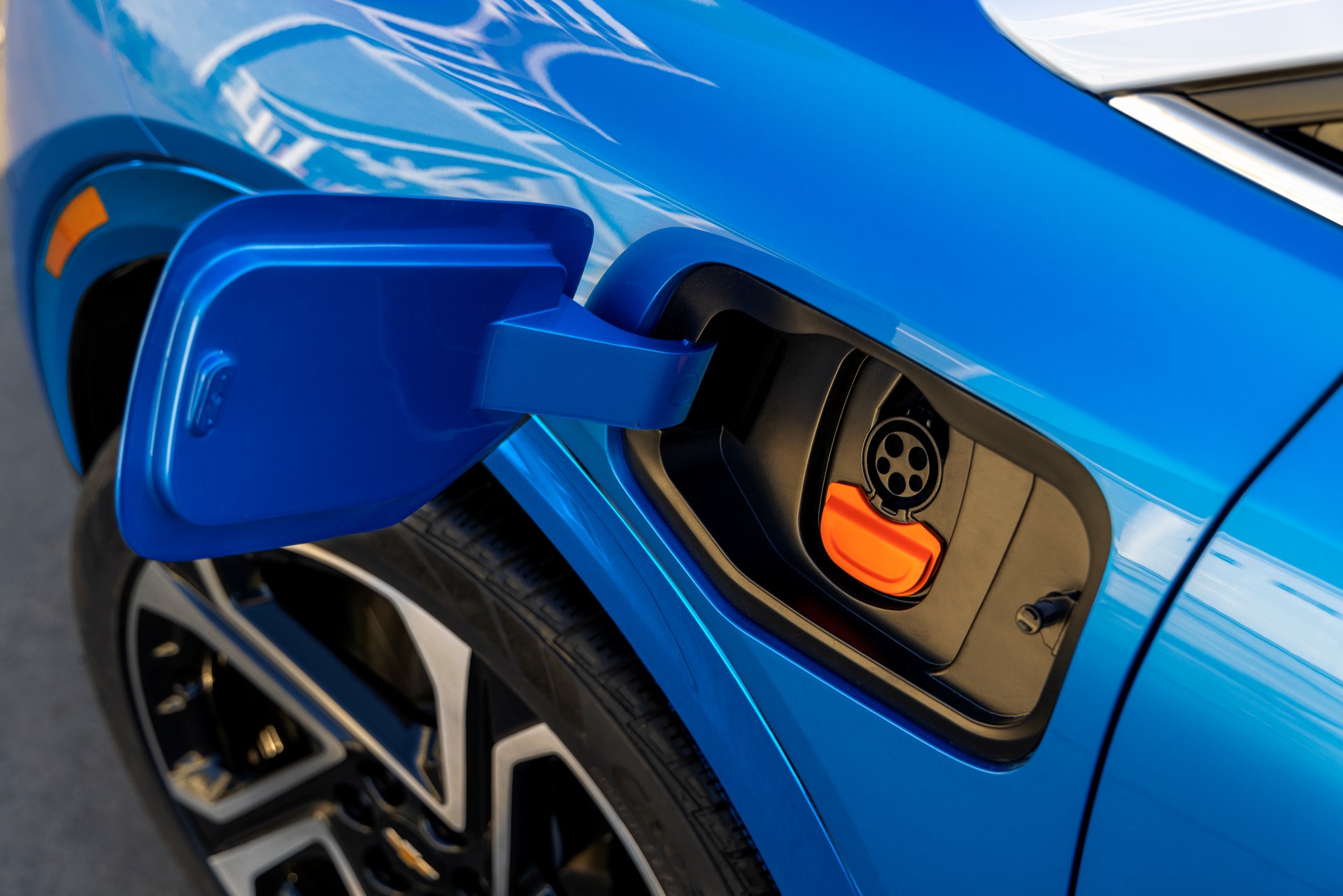 Chevrolet didn’t release detailed specifications, but they confirmed the Equinox EV will be offered with an assortment of powertrains. Kicking things off is the entry-level 1LT, which offers both standard and extended range batteries as well as a choice of front- or all-wheel drive. 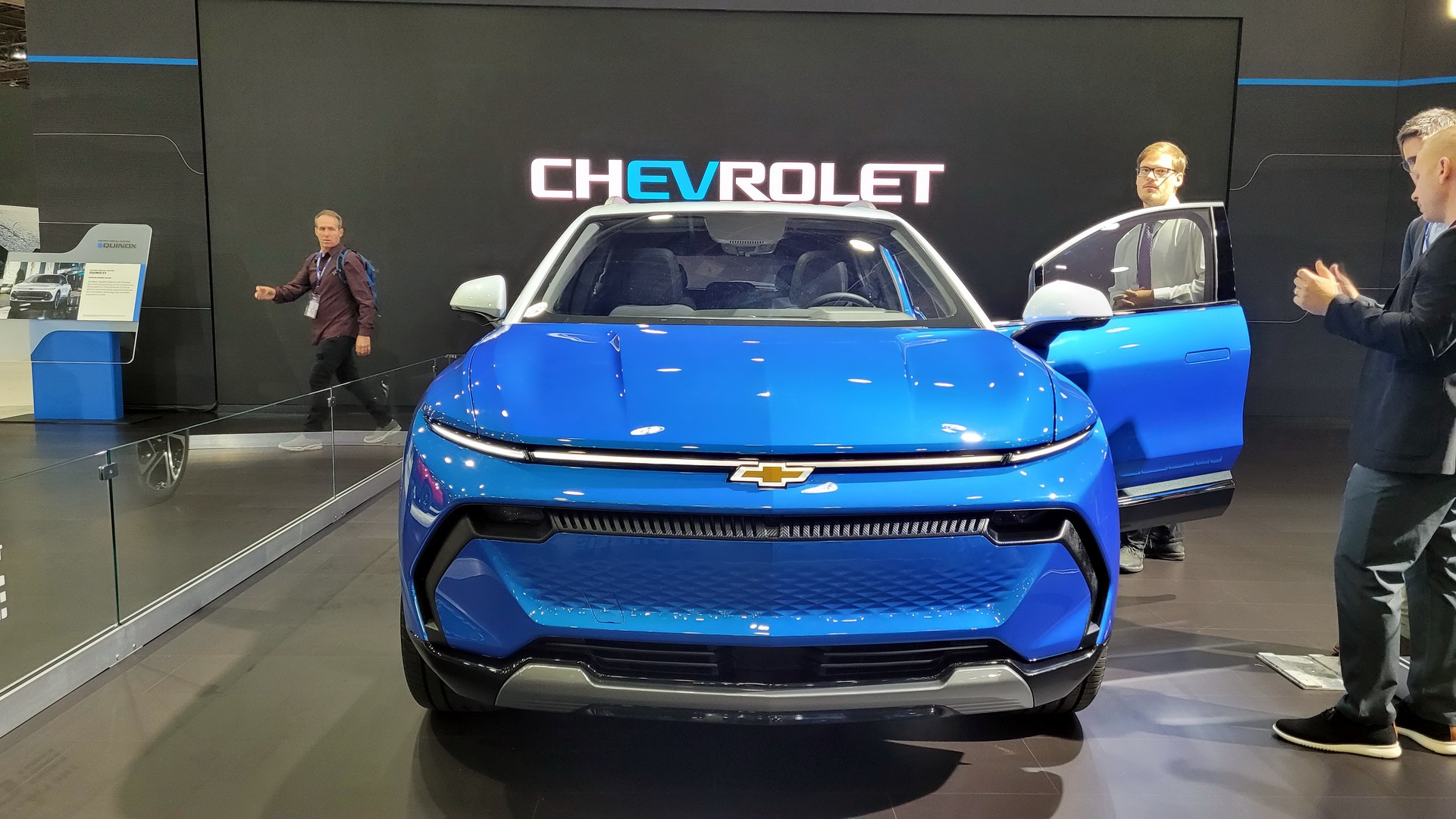 When it comes time to charge, owners can get up to 34 miles (55 km) of range for every hour of charging with the standard 11.5 kW Level 2 charging capability. That jumps to 51 miles (82 km) per hour on the range-topping Equinox EV 3RS, which supports a Level 2 charging capacity of 19.2 kW.

Away from home, owners will be thankful for the standard DC fast-charging capability of up to 150 kW. It enables the crossover to get approximately 70 miles (113 km) of range in as little as 10 minutes.

Last but not least, Chevrolet confirmed the Equinox EV will offer a vehicle-to-load function that can supply up to 3 kW of power. We’ll learn more details closer to launch, but this means owners will be able to power accessories while camping or tailgating. 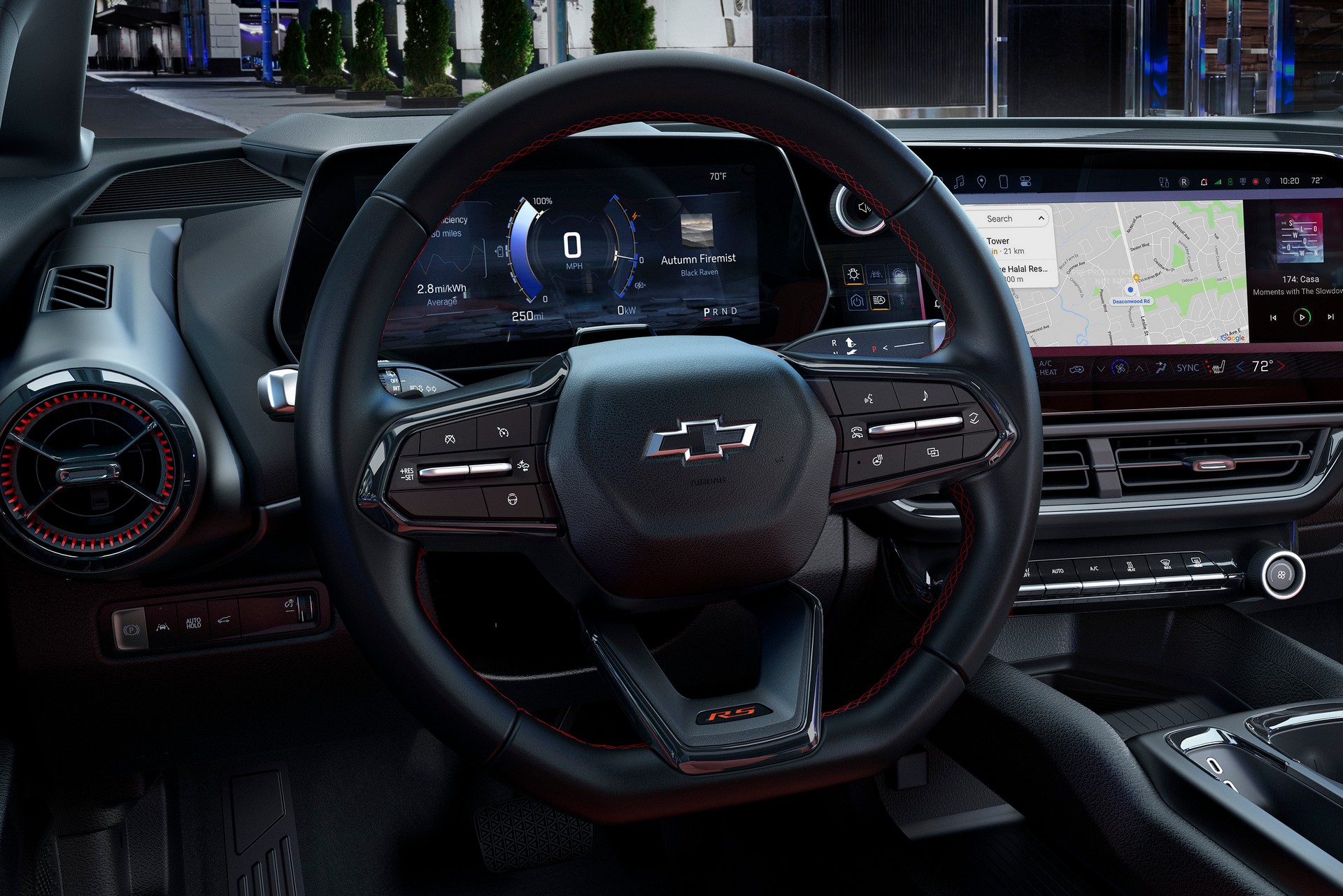 The features don’t end there as Chevrolet will offer Adaptive Cruise Control, a Head-Up Display, a Rear Camera Mirror, and HD Surround Vision. Customers can also opt for the Super Cruise semi-autonomous driving system, which allows for hands-free operation on more than 400,000 miles (643,738 km) of compatible roadway in the United States and Canada. 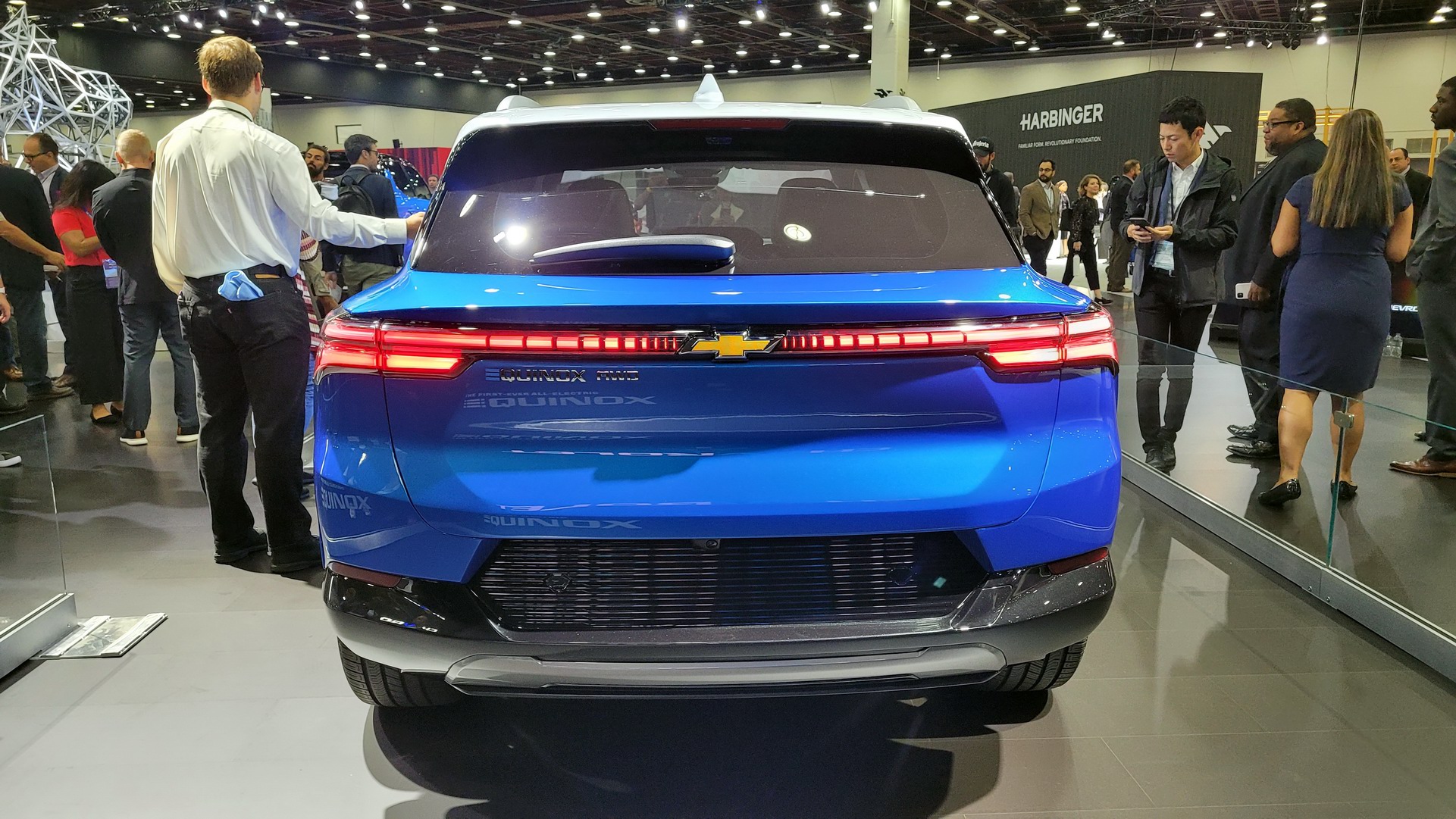 The 2024 Chevrolet Equinox EV will arrive in the fall of 2023 and initially be available as a limited edition. However, the full lineup is slated to arrive within a year and the entry-level 1LT trim will be the last to become available.

Thanks to affordable pricing and good ranges, the Equinox EV appears to be a game changer and it will undoubtedly help to take electric vehicles mainstream as the ICE-powered model is Chevy’s second best-selling vehicle. The company also pointed out the crossover cements their reputation as an EV powerhouse as they’ll have entries in three of the most popular segments – compact crossover, mid-size crossover, and full-size truck – in the United States.