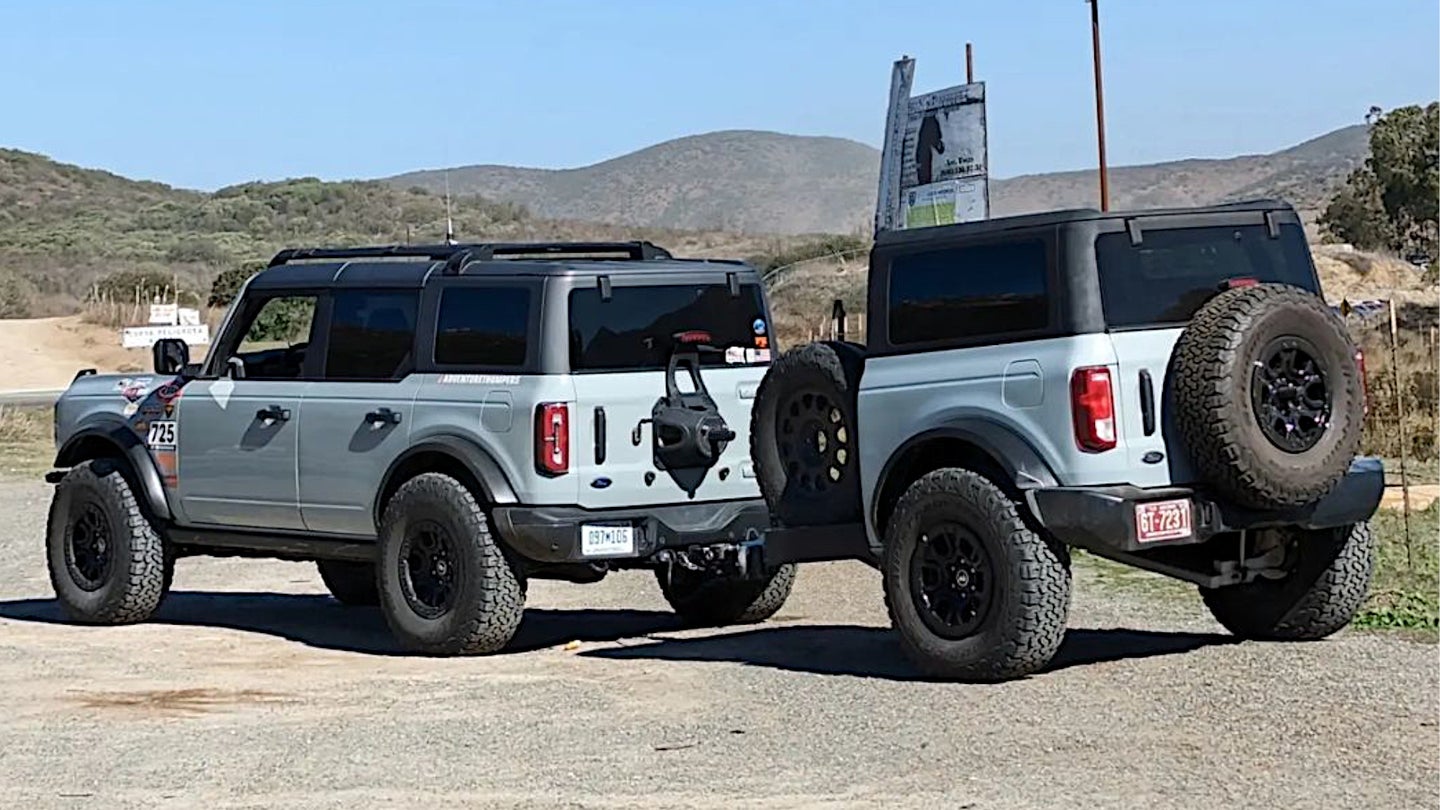 The Ford Performance support team rocked up at the Baja 1000 with the coolest possible setup. You’re not seeing double—that’s a four-door Ford Bronco towing a custom Bronco trailer.

The trailer itself was built from a real pre-production Bronco, according to Larry Chen‘s Instagram post. Instead of being destroyed, it was cut in half to serve the race team’s needs. It’s loaded with all the tools the race team needs to keep its vehicles going in the Baja 1000. It also contains a large fuel cell inside, which can be topped up via the stock filler neck. The trailer rides on air suspension, and the stock Bronco electric parking brake is also still functional.

The trailer was created using a two-door donor chassis. On the two-door Bronco, the B-pillar finishes just in front of the rear wheel well, providing a clear cutline for the build. It uses a Cruisemaster D035 trailer hitch, built especially for off-road applications. It provides plenty of articulation in all directions for safe towing on rough terrain. The trailer has a stout steel frame, with 3/16-inch steel plating on the bottom to protect the fuel tank.

The trailer has all the key provisions you’d expect from a racing support vehicle. The floor has been given a tough aluminum skin and is set up to receive multiple toolboxes. There’s a pair of air compressors named “Huff” and “Puff,” complete with five gallons of air storage. The fuel storage system is complete with a hose and nozzle system for delivering fuel to other vehicles, and it even runs off a stock fuel pump.

Bronco ambassador Chase Gentry shared a video on YouTube breaking down the build. The trailer was the work of Darin Spreadbury, who works at Ford’s Arizona Proving Grounds. His regular job involves repairing Ford’s off-road vehicles during testing operations. The entire build came together in six weeks.

The Bronco and matching trailer served as the chase vehicle for Ford’s recent Baja 1000 race effort. The Ford Performance team entered the Baja 1000 with the Ranger Raptor race truck. The team claimed victory in the Stock Mid-size class, albeit by virtue of being the sole entry. Of course, completing the Baja 1000 is no mean feat, and speaks to the truck’s performance credentials. Achieving this with a stock engine, transmission, and driveline is a solid endorsement of the truck’s capability.

Pre-production vehicles are typically crushed or shredded as a matter of course, so it’s nice to see one given a new useful purpose instead. Plus, there’s just something fashionable about rocking up with a trailer that perfectly matches the tow vehicle. We’d love to see this become a trend in the Baja 1000 paddock and elsewhere.

The post A Pre-Production Ford Bronco Makes for the Perfect Ford Bronco Custom Trailer appeared first on The Drive.