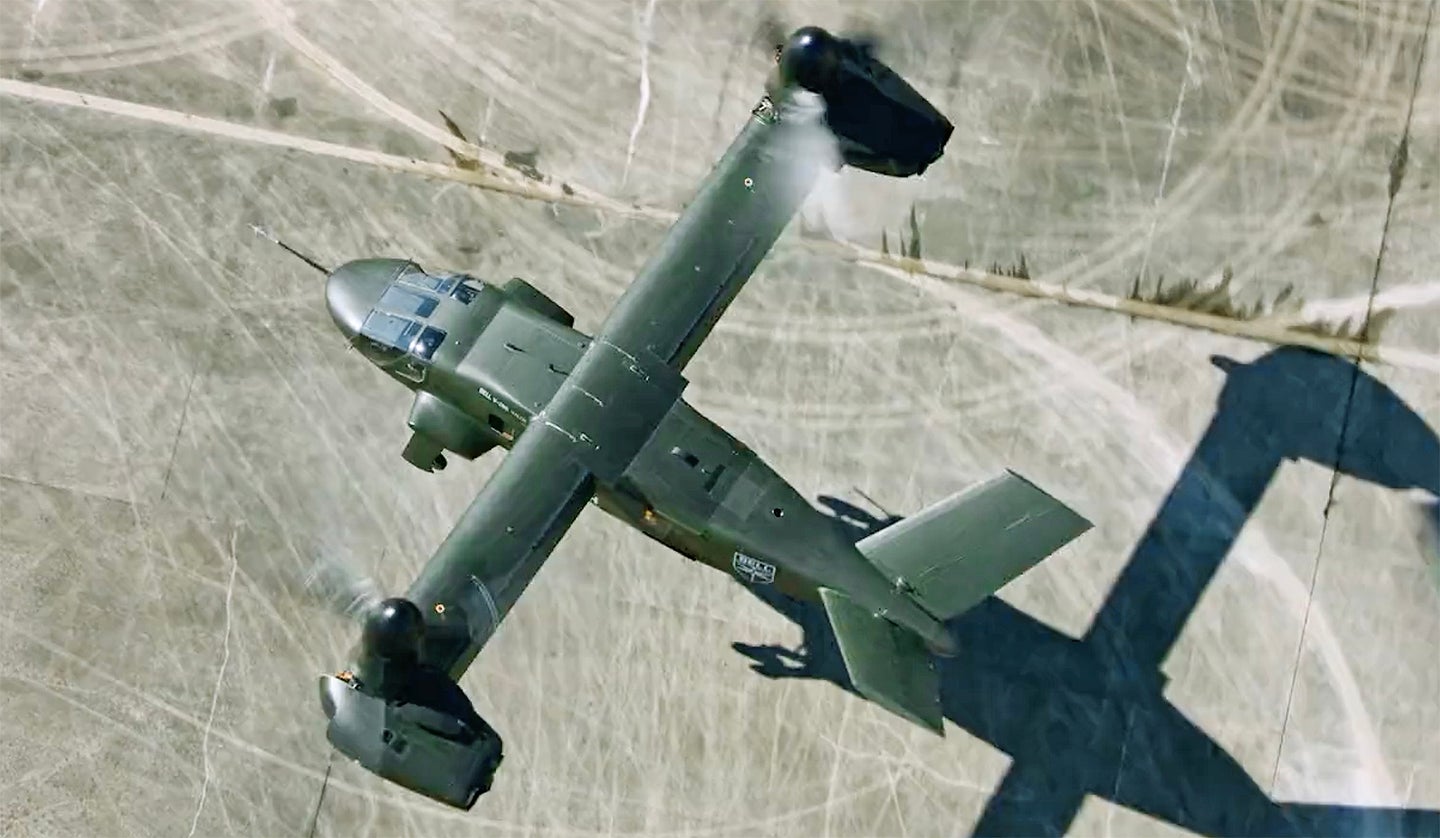 The reaction to Bell’s V-280 Valor beating Sikorsky and Boeing’s SB>1 Defiant for the opportunity to replace the U.S. Army’s sprawling fleet of H-60 Black Hawks under the Future Long-Range Assault Aircraft initiative, or FLRAA, was potent, to say the least. There have been very strong opinions flung about with very little actual information or direct insight beyond anecdotal claims to back them up. In fact, I would go as far as to say that many were just rooting for the one that looked the coolest and most exciting to them over what made sense in terms of the goals of the competition. The truth is that this program is more than just a Black Hawk replacement, it’s become key to the viability of the very mission of Army aviation as a whole, and thus is seen as an existential program by the service.

We do have a good sense of what the Army was looking for in terms of performance and capabilities for its Black Hawk replacement. The service released unclassified FLRAA requirements three years ago, as you can read more about here.

Still, when it comes to the decision itself, the reality is that we were not privy to the mounds of data, cost analysis, developmental and production outlook, performance metrics, and much more for either of the entrants. The Army, on the other hand, was. That doesn’t mean they bet on the right or wrong horse, but it’s safe to say that they have a lot more information to make that decision than we have.

Considering we are talking about a big leap in performance over traditional rotary-wing aircraft with either contender, the risks involved in acquiring such a capability en masse are very high. What the V-280 had going for it was maturity. There is no way around this. Bell spent decades developing the V-22 Osprey through an arduous process and has since fielded hundreds of them that have racked-up huge sums of operational hours in some of the harshest conditions on the planet. The Osprey has its issues still, but it has also been successful in surviving massively bad press and extreme controversy. Today, MV-22s and CV-22s, and now CMV-22s, operate all over the world all day every day. This is a fact. There is not a compound coaxial rigid-rotor helicopter, like Defiant, doing anything similar at this time.

And oddly like Northrop Grumman’s B-21 Raider win the better part of a decade ago, the Valor is Bell’s ’tiltrotor 2.0′ of sorts. It was designed to make good on areas where the Osprey fell short. This included everything from reliability, nacelle design, and acquisition cost, to cost per flight hour and disc loading. Bell built an impressive demonstrator that has flown for half a decade and hundreds of hours in all kinds of tests, during which it explored its operating envelope potential, reaching speeds of over 300 knots. This is a highly impressive feat that substantially knocks down risk even further and gives the Army a clearer idea of what they will be buying, not just in terms of projections on paper, but in hardware sitting on the ramp that has been rung out in the air.

The Defiant, on the other hand, seemed to capture the public’s mind far more than the Valor. It looked like something brand new and futuristic, but at the same time, it also looked more like the Black Hawk it was supposed to replace. It seemed to be a tighter package (although it is still remarkably large, especially in how tall it is) and even appeared to many as comparatively less complex, although that is a totally subjective notion. It had ‘sex appeal’ that the Valor seemed to lack, and by now, tiltrotors are just a normal fixture in military aviation. A compound, coaxial rigid-rotor configuration certainly is not.

While the ramp appeal of the Defiant may have outmatched the Valor in some people’s eyes, the aircraft and its underlying design concept is far less mature than that of Valor. That is not to say that Sikorsky, now a division of Lockheed Martin, hasn’t had a good amount of experience with its ‘X2’ technology that underpins the Defiant and its smaller Raider X design, but it is not an outgrowth of an already fielded technology with hundreds of aircraft flying around the globe. Nor has SB>1 demonstrator flown nearly as much. These are just facts. Sure they can be spun by any party, but the Defiant is just not as mature of a design. That does not mean it should not have been chosen, but balancing capability against risk, and considering how absolutely crucial this program is, this could have had an impact on the Army’s decision.

Cost considerations loom huge here, as well. We don’t know what each team bid their aircraft at, both in terms of development, acquisition, and sustainment costs. With fewer opportunities available for big military aircraft contracts than ever, companies can be very aggressive in order to capture the deal. Down the line, this can also prove disastrous if things don’t go as planned. In other words, a win now can mean economic insolvency down the line. We have no idea if a low bid was the case in this instance, but it wouldn’t be unprecedented if it were.

There are also logistical and performance concerns. What aircraft could meet or exceed range, speed, payload, and maneuverability expectations, and at what cost? Which could more easily self-deploy? This is big as both aircraft seem quite large and moving them via transport may be time-consuming and problematic at scale.

While tiltrotors still get a bad wrap in some circles, Valor is not an Osprey, but it builds on decades of development and operations of that type. Concerns about Valor’s ability to autorotate in an emergency and being able to access tight landing zones due to its larger footprint are absolutely valid. The same can be said for historical concerns about vibration and clutch system concerns found on a compound rigid-rotor design. But there are tradeoffs inherent to making such a leap in performance. None of this really matters if the aircraft can’t even reach a relevant landing zone, to begin with, and herein lies a major part of this saga that most are missing.

Army aviation is entering into an existential crisis of sorts. The force was built for short-range conflicts in Europe and, to some degree, in the Middle East, not the vast expanses of the Pacific. When combat radius is measured in a couple of hundred miles, thousands of helicopters suddenly have much less to do during a peer-state conflict in that theater. Basing UH-60 Black Hawks and AH-64 Apaches forward close enough to make an impact in terms of most types of operations would put them squarely in the crosshairs of a very watchful and aware enemy. And even operating deep within the enemy’s anti-access space puts traditional helicopters at extreme risk. With range and speed, the Army buys back relevance. It’s as simple and hard to swallow as that. And no, that doesn’t mean those factors solve all the Army’s rotor-wing relevancy problems, survivability is still a huge issue alone, but it goes a long way to making a case as to its value in a future conflict.

So, could the Army be willing to give up certain wants in order to make sure it gets a faster and farther-flying aircraft? I believe the answer is absolutely. Otherwise, how do they justify the massive enterprise that is Army aviation in any form that resembles what it is today? With this in mind, could performance in terms of range have influenced this decision more heavily than most realize? Very possibly.

So critiques stating claims like Valor can’t get into tight landing zones, isn’t as maneuverable as it needs to be, or can’t auto-rotate may or may not be valid, but they also may not take precedent if they are when you need a new capability to make sure the core of your fleet even factors heavily into the future fight at all.

We will be discussing much more about the future of Army rotary-wing aviation in the near future, we have some very big pieces in the works on that, but the basics needed to be stated here because it looms over this decision and even the very relevancy of this program.

Beyond that, it must be noted that this is all far over. Sikorsky and Boeing will likely protest this decision. You can’t blame them for doing so and they may have a just case that could prevail. At the same time, it is so important to remember that Sikorsky’s X2 technology is still very much in the running for the future armed scout reconnaissance helicopter. Some would even posit the Raider X, which shares the same general configuration, but is smaller than Defiant, is the front-runner as it features higher performance than Bell’s Invictus 360, which is a standard helicopter design. Maybe Valor and Raider X are just the right dream team the Army can leverage to keep in the fight. If the Army passes over Bell’s Invictus, X2 technology would enter production in the form of the Raider X, would be fielded in large numbers, and the technology could then grow into other designs via scaling the concept up and down. In other words, Raider X could reduce risk just like the Osprey did for Valor.

Also, I would be surprised if Sikorsky and Boeing give up on Defiant. There are other potential tenders on the horizon, including international ones, that could better fit its abilities over Valor. The U.S. special operations community could also step in at any time, especially considering the tighter areas they work in historically and their long-term love affair with the H-60 Black Hawk. So even if Valor remains big Army’s pick, Defiant could prove to be a success and big Army could step back in at any time.

Of course, all of this is predicated on either of these aircraft, Valor or Defiant, being affordable enough to buy in huge numbers to replace the H-60 in the Army’s ranks. It is also quite possible that the H-60 continues on in Army service and is even procured alongside this new high-speed aircraft in the decades to come due to cost and capability concerns. How many times have we been promised exactly this type of blanket replacement for a legacy platform only to see it not come to fruition? The F-15 and F-22 come to mind, but there are many other examples. And there are even greater technological leaps when it comes to vertical lift emerging on the horizon.

The bottom line here is that beyond anecdotal statements, we just don’t know enough to understand exactly why the Army made the decision it did and that choice is not even set in stone. While I totally understand that people make a special individual connection with a certain design and extrapolate how they think it would perform, this just isn’t reality.

Hopefully we will get more information soon and learn more about this decision and what the Army expects of its new mount in the years and decades to come.

The post A Reality Check On The Army Picking V-280 Valor Over SB>1 Defiant appeared first on The Drive.