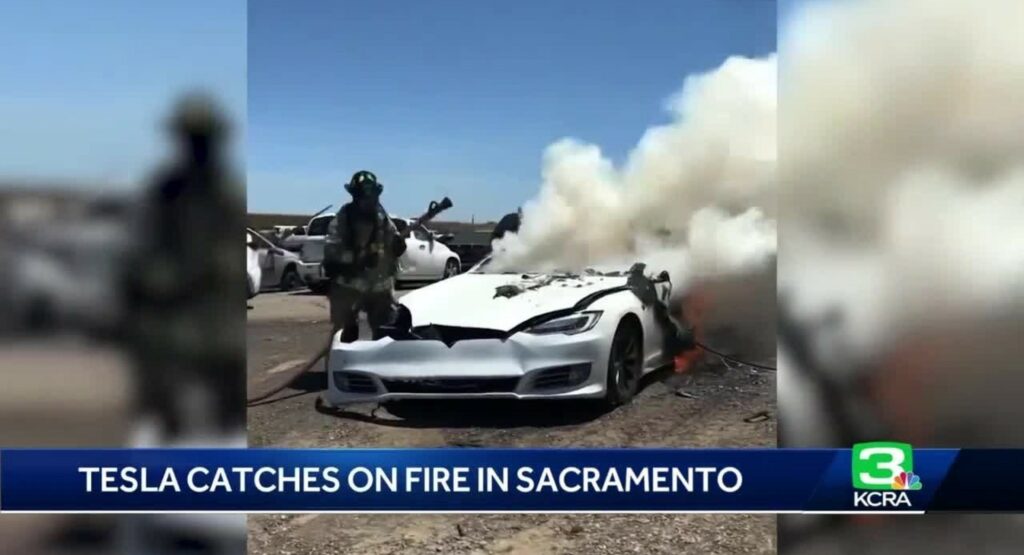 There have been quite a few instances where electric vehicles have caught fire resulting in many sensationalized reports (and some costly recalls), but a new one from California demonstrates one major concern.

Despite the fact that EVs are, in fact, the least at risk of having a car fire, when they do go up, they are very hard to put out. One Tesla just demonstrated that by burning to the ground after sitting in a wrecking yard for some three weeks.

When a battery-electric vehicle experiences a thermal runaway and catches fire, it’s incredibly tough to stop. In some cases, just a single battery cell can lead to one such runaway event as it triggers the cells around it to overheat as well. In the case of this specific Tesla, the crash that landed it at the scrap yard didn’t reportedly involve battery damage or fire.

Metro Fire of Sacramento arrived on the scene with the car already fully engulfed in flames. Despite having all of its normal tools on hand, they couldn’t fully extinguish the fire without resorting to serious measures. That included building a pit, putting the Tesla in it and then filling it with water to cool the hot components to a stable temperature.

Photos of the pit the crews created… pic.twitter.com/BVnhxA2aOt

That stopped the blaze and the fire department went on to clarify what they knew of the situation: “The vehicle sat parked in a wrecking yard for 3 weeks after a vehicle accident (not involving fire), and then caught fire in the yard. Our crews were dispatched, and ensured the vehicle was extinguished after well over an hour of firefighting operations.”

There’s no report on how exactly this fire began and it’s unlikely that we’ll ever know for sure due to the extensive damage. Many companies are working hard to create batteries that greatly reduce the chance of thermal runaway.

Thankfully, nobody was injured in the incident. While EVs, in general, are quite safe with regard to fires, it will be interesting to see how fire departments adapt to this new challenge over time. We doubt building a pit and moving the vehicle will be a viable solution in most cases.