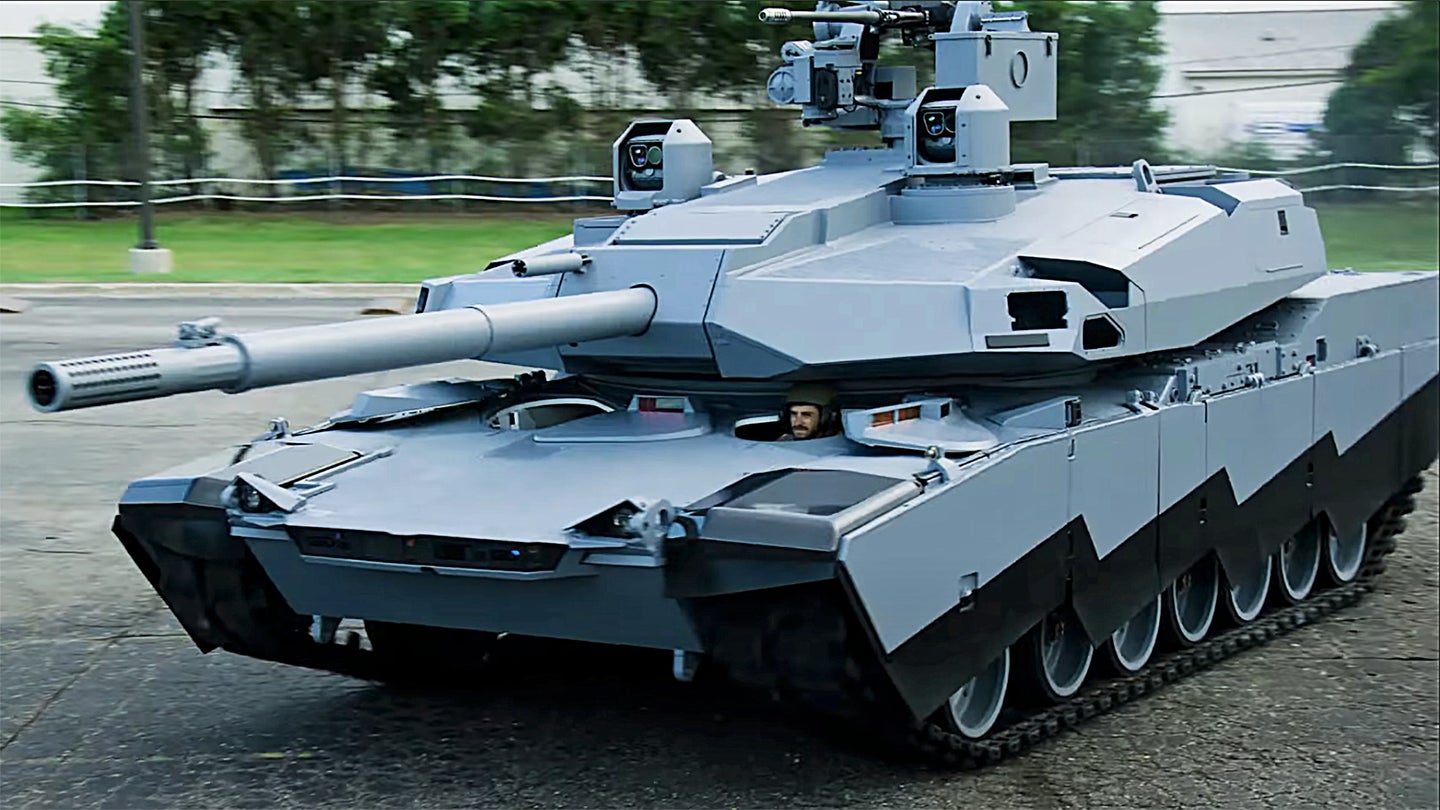 General Dynamics Land Systems has officially unveiled its AbramsX future main battle tank concept in the flesh — or should we say ‘in the steel.’ Earlier this week we wrote up the latest on this feature-packed M1 Abrams evolution, but now we get to see the actual hardware ahead of the Association of the U.S. Army’s big conference in Washington, D.C., this week. You can get up to speed on what we know about the tank in that piece linked here.

Suffice it to say, the AbramsX very much looks the part of a future tank, with its highly revised turret that features multiple electro-optical sights and a remote weapon station sporting a big 30mm chain gun. The sniper gray-like urban camouflage with countershading along its serrated skirt also gives it a very futuristic look, as does its XM360-derivative 120mm cannon with its ported muzzle brake.

But the heavily-armored tank’s hybrid powertrain buried deep inside it is probably its most exciting feature. General Dynamics says this will result in a whopping 50 percent fuel saving — the Abrams’ kerosene-guzzling turbine engine has long involved a major logistics-versus-performance trade-off. This hybrid system will also allow AbramsX to operate silently while sitting idle and possibly for short durations at low speed, which would provide a huge tactical advantage.

An unmanned turret with an auto-loading ammunition system makes possible a reduced crew size, down from four to three. This is also a major draw, increasing survivability and freeing up space in the turret for more capabilities. Reducing manpower is also high on the list of wants for armies around the world. The AbramsX is lighter than its predecessors, bucking the ongoing trend of increasingly massive M1 variants.

The digital backbone for the tank will be the KATALYST Next Generation Electronic Architecture (NGEA). It will connect all its systems together and provide for ease of upgradability of its hardware and modification of its software so that the tank can age more gracefully than its forebearers and can be adapted more quickly to accommodate changing tactical realities and technologies.

There are also clearly slots for other things in its turret, like countermeasure grenades, active protection systems, and distributed aperture camera systems (DAS). There appears to be an advanced sensor suite for the driver as well on the front of the tank’s hull that could also feed into the DAS architecture and provide a 360-degree video feed. With the help of augmented reality, this would allow the crew to ‘look through’ the tank’s hull for a major leap in situational awareness, as well as see objects of interest highlighted digitally in their surroundings.

Of course, these are just some of the main features that are part of the AbramsX initiative, which also includes the ability to team up with unmanned ground vehicles. Once again, give our recent post on the concept a read for more details as to its proposed capabilities.

Regardless, it is impressive to see this thing in reality, not just in concept images.

While this remains a concept demonstrator, the U.S. Army and America’s allies are definitely reevaluating the fate of the tank after the events in Ukraine. So, yes, a future Abrams resembling the AbramsX with its unmanned turret is definitely a possibility.

We will be at the Association of the U.S. Army’s conference this week and will find much more out about AbramsX from General Dynamics. We will report back when we do.