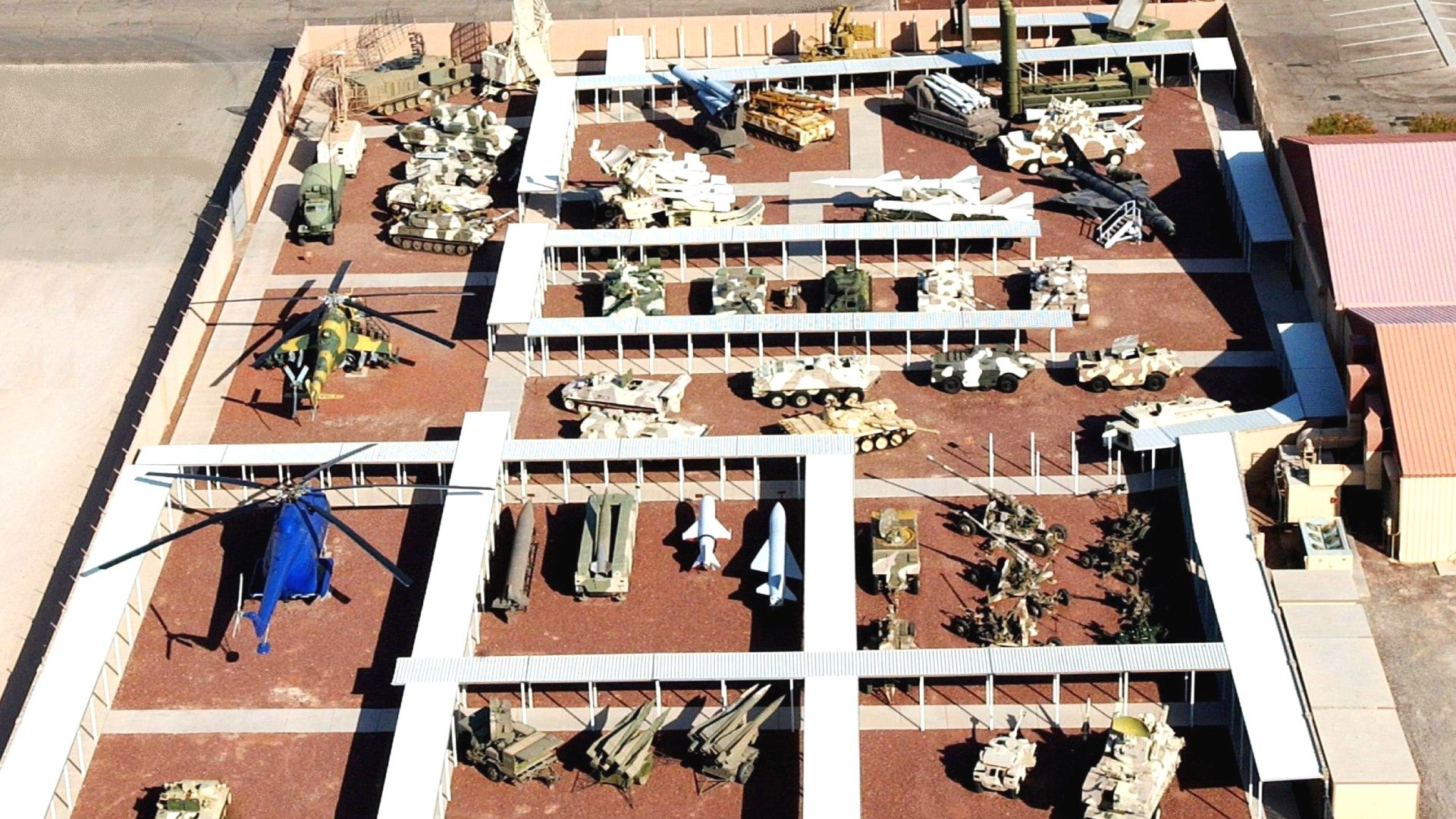 The Air Force has issued a request for information, or RFI, pertaining to its plans to move the Nellis Threat Training Facility — or “Petting Zoo” — at Nellis Air Force Base in Las Vegas, Nev., to a new part of the base under construction. As part of the request, the Air Force has published a list of equipment housed at the facility, offering a rare glimpse into the wide range of foreign weapons technologies the U.S. Air Force possesses for training and education.

The Threat Training Facility (TTF) is operated by the 547th Intelligence Squadron, which specializes in adversary tactics and threat analysis and conducts advanced Red Flag exercises. The five-acre TTF features a range of small arms, artillery and armor, surface-to-air weapons systems, electronic warfare and radar platforms, and even foreign-made aircraft from former Warsaw Pact nations, such as a MiG-29 Fulcrum, a MiG-23 Flogger, and an Su-7 Fitter. All of these assets will be moved less than a mile to a new structure being constructed southwest of the current facility. The Air Force wants all the equipment moved by Sept. 28, 2022, according to the RFI documents.

A full list of the equipment that will be moved to the new facility at Nellis can be read below:

The TTF at Nellis was classified for much of its life but was revealed to the public in the early 1990s following the dissolution of the USSR. It has been rumored that American intelligence and law enforcement agencies routinely visited the site for hands-on training with foreign materiel. While many of the systems at the site date back to the Cold War, many are still in use by foreign nations, such as the MiG-29s used by Russia, Iran, and North Korea. Interestingly, one U.S.-made system appears on the list: the MIM-23 Hawk surface-to-air missile system. The Hawk still happens to be in at least some level of service in Iran (which also makes an indigenous derivative), among other places.

Some of the ‘exhibits’ at the facility were acquired by the United States from defectors seeking asylum, while others were captured by U.S. forces or obtained via allies who seized them from adversary nations during conflicts. Others came from former Soviet states following the collapse of the USSR. Some were even stolen by intelligence agencies. An example of one such operation was when the U.S. Army’s elite 160th Special Operations Aviation Regiment managed to snatch a Libyan Mi-25 Hind helicopter gunship from Libya’s neighbor Chad in 1988.

The request for information related to moving these assets states that contractors will be responsible for “all labor, equipment, and materials required to disassemble, move, permanently place, and reassemble the listed military equipment from the current Threat Training Facility (TTF) location to the newly built TTF.” Some of the materials at the site will have to be disassembled to be moved, including several radar systems and a Mi-24 Hind helicopter. According to the request, the 547th Intelligence Squadron will provide a subject matter expert to assist the contractor in disassembly, including specific information such as “which bolts are required for disassembly and subsequent reassembly.”

USAF
A rendering of what the new facility will look like once completed.

The TTF remains relevant today in part because so many Soviet-era air-defense systems or aircraft remain in use around the world. U.S. forces responding to conflicts or crises, even in what are considered low-threat environments, could potentially face some of these older systems as non-state actors such as terrorist groups have been known to acquire and use older air defense systems. The “Petting Zoo” is just one — and probably the most public — element of a far larger enemy hardware familiarization ecosystem, much of which remains draped under a shroud of secrecy.

Foreign materiel exploitation, or FME, allows U.S. forces to train on actual threat-representative systems to look for potential vulnerabilities and get acquainted with these foreign military capabilities under real-world conditions. Some of these foreign-made systems are also often used in Red Flag and other exercises to provide enhanced realism alongside simulated adversary forces. There is also a reverse engineering and deep technological exploitation aspect to some FME activities.

While the full list of the assets being moved at Nellis is interesting on its own, it’s not as if these systems were a big secret once the facility was declassified. In fact, they sit out in the open and are viewable on Google Maps, and tours of the facility are provided to VIPs and those who could find it operationally beneficial. Still, seeing them listed out along with the size and weight of each piece of equipment offers a new comprehensive overview of the wide range of foreign materiel at the base.

Google Maps
An overhead view of the facility available on Google Maps.

While the Petting Zoo at Nellis provided familiarity to a number of threats, many of which are now dated, far more modern foreign systems exist in U.S. hands and are trained against and tested in highly secure locales. It’s probable that this new facility, which appears to offer a large enclosed display space, will display a new generation of potential adversary weapons, including those from China.