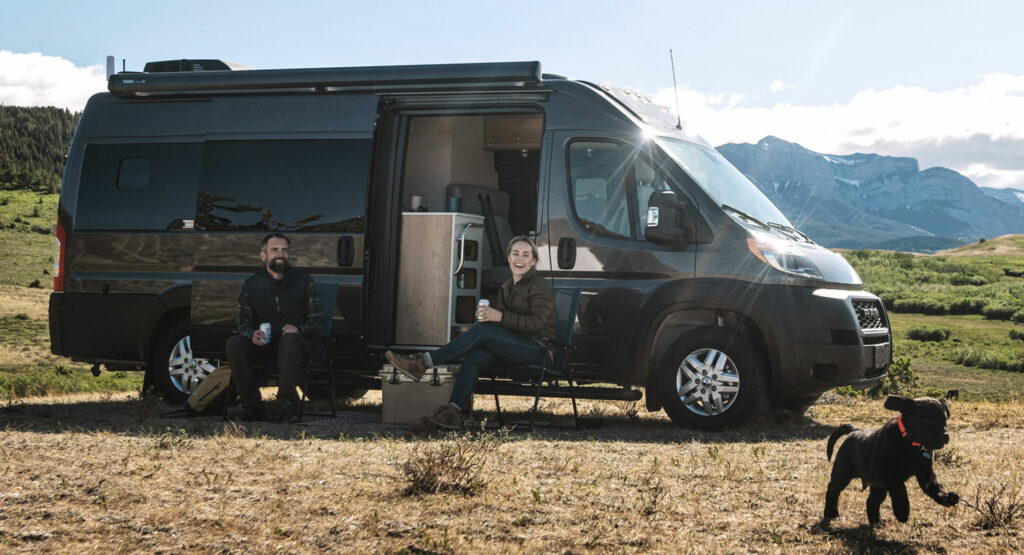 Nothing says baller more than pulling up to a campsite in an Airstream Classic travel trailer, but buyers in the market for a motorhome now have a new option in the form of the Airstream Rangeline.

Set to become the brand’s most affordable motorhome by a wide margin, the Rangeline joins the company’s touring coach lineup and is notable for being based on the Ram ProMaster 3500.

Besides eschewing Mercedes Sprinter bones, the Rangeline charts a different course thanks to front-wheel drive and a 3.6-liter Pentastar V6 engine. The latter stands in contrast to the typical diesels, and it produces 280 hp (209 kW / 284 PS) and 260 lb-ft (352 Nm) of torque. The engine is connected to a nine-speed automatic transmission and Airstream estimates that it will return between 18-20 mpg on the highway. 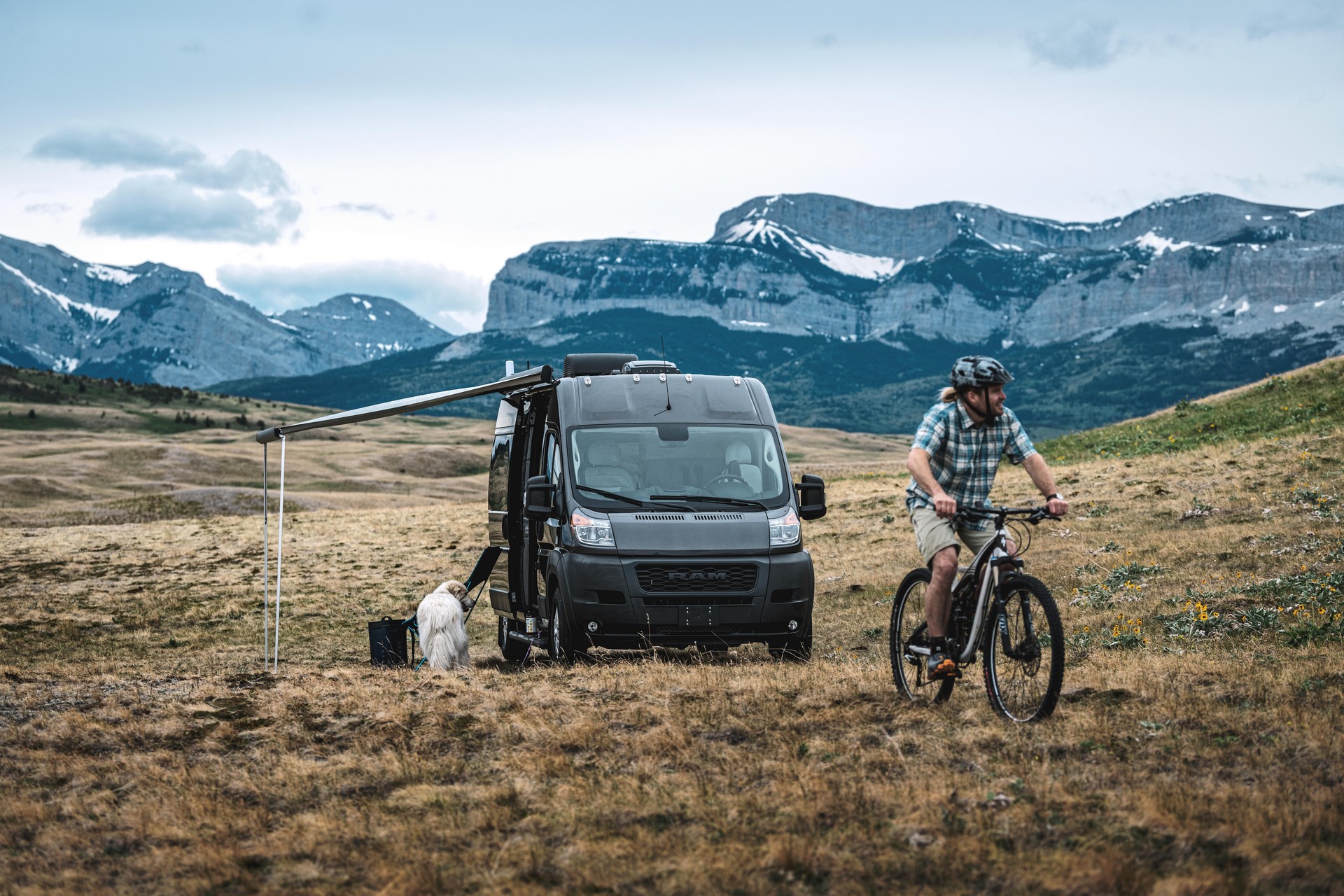 Putting the powertrain aside, the 21-foot camper van has a purposely restrained design that doesn’t call much attention to itself. As part of this effort, Airstream painted the silver grille surround black for a more low-key appearance.

Elsewhere, the company cleverly hid hookups behind a piece of body cladding that  easily flips open. However, the sewer and electrical connections are still visible.

Other notable features include an awning and side steps that have an integrated leash holder as Airstream customers are dog lovers. The model also sports a 200 watt solar panel and a hitch that can tow up to 3,500 lbs (1,588 kg). 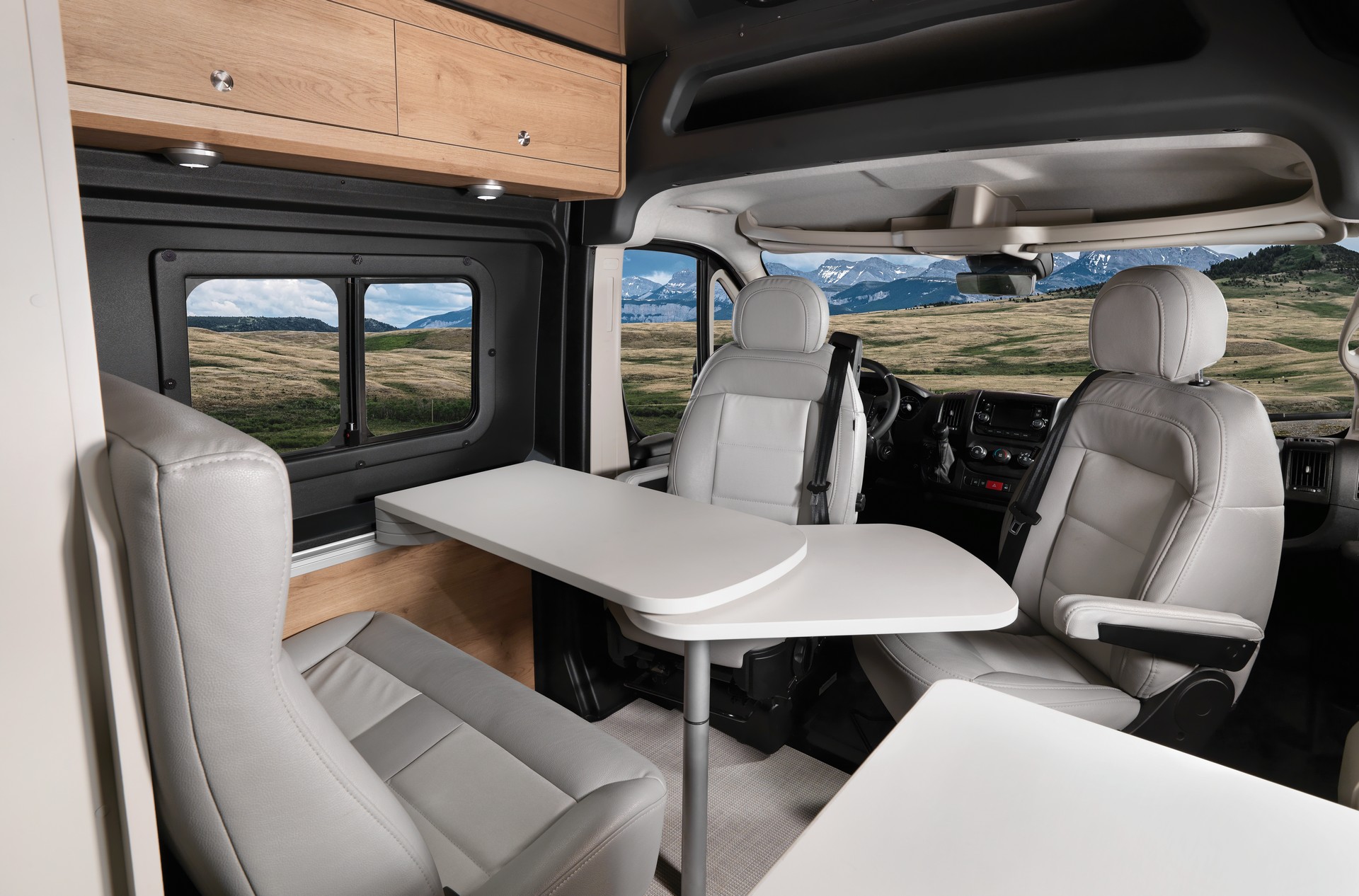 Moving into the cabin, there’s a “European-inspired” interior with stylish cabinetry and two swiveling captain’s chairs up front. They’re joined by a two-person rear bench and the seats are separated by a modular table that can easily be expanded.

Further back, buyers will find soft-closing drawers and posi-lock cabinets as well as a small kitchen. The latter includes a 3.2 cubic foot (90.6 liter) refrigerator and 0.4 cubic foot (11.3 liter) freezer with a dry erase board on the door for leaving quick messages and notes. They’re joined by a microwave and a 1,000 watt induction burner as the model doesn’t use propane.

While the kitchen is fairly basic, it has a handful of cool touches including a removable JBL Bluetooth speaker that resides in a paper towel-like holder.  Buyers will also find a retractable power strip near the sink. 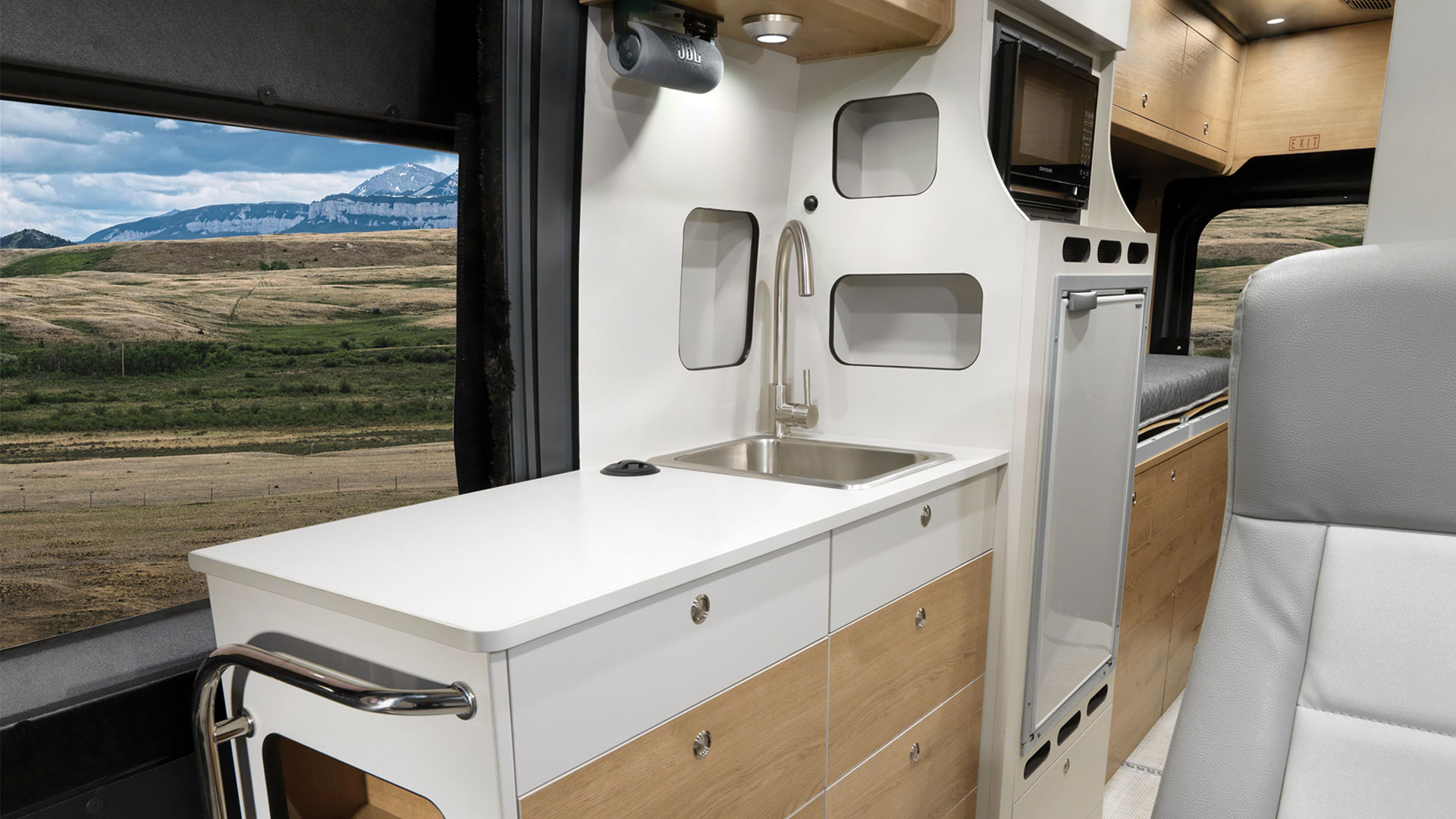 Elsewhere, there are adjustable shelves, a retractable step, and integrated food and water bowls for pets. Speaking of the latter, they can be removed to turn the compartment into a traditional drawer.

When nature calls, there’s a ‘wet bath’ that consists of a shower and toilet combo. The latter isn’t exactly glamorous, but it sure beats an outhouse.

That brings us to the rear sleeping compartment, which has a folding bed that resides above a generous storage area. Designed to sleep two adults, the bed measures 74 inches (1,880 mm) long by 52.25 inches (1,327 mm) wide. 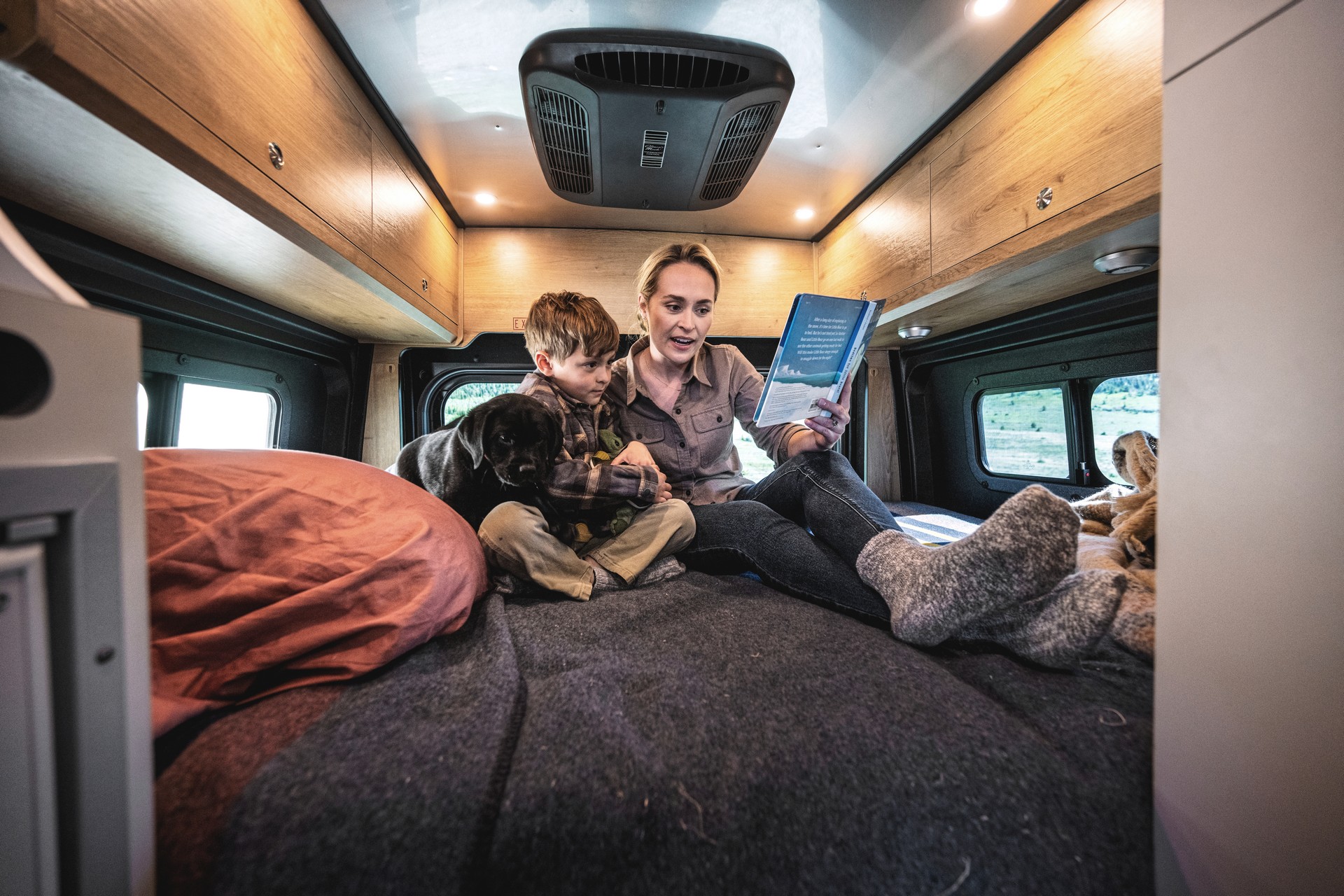 Customers who need more space can order an optional pop-top, which increases the sleeping capacity to four people. That sleeping area measures 78 inches (1,981 mm) by 50.5 inches (1,283 mm), but it doesn’t come cheap as the pop-top costs more than $11,000.

Rounding out the interior highlights are MOLLE panels on the rear doors and an L-track storage system that can accommodate bikes and other adventure equipment. Buyers will also find motion-sensing lights, air conditioning, a fan, and a Firefly multiplex control panel for “managing and monitoring lighting and onboard systems.” Other niceties include a rear smartphone charger and an aluminum ceiling.

To keep owners comfortable, the Rangeline has a 2.8 kW generator that draws fuel from the van’s gas tank. It’s joined by a hydronic heating and hot water system, a 28 gallon (106 liter) fresh water tank, a 270 Ah battery, and pre-wiring for internet connectivity. Airstream officials also noted the motorhome comes equipped with an assortment of ProMaster options such as adaptive cruise control and a digital rearview mirror.

Airstream is currently accepting orders and pricing starts at $131,882. While that sounds steep, the Mercedes-based Interstate 19 is shorter and begins at $200,681.