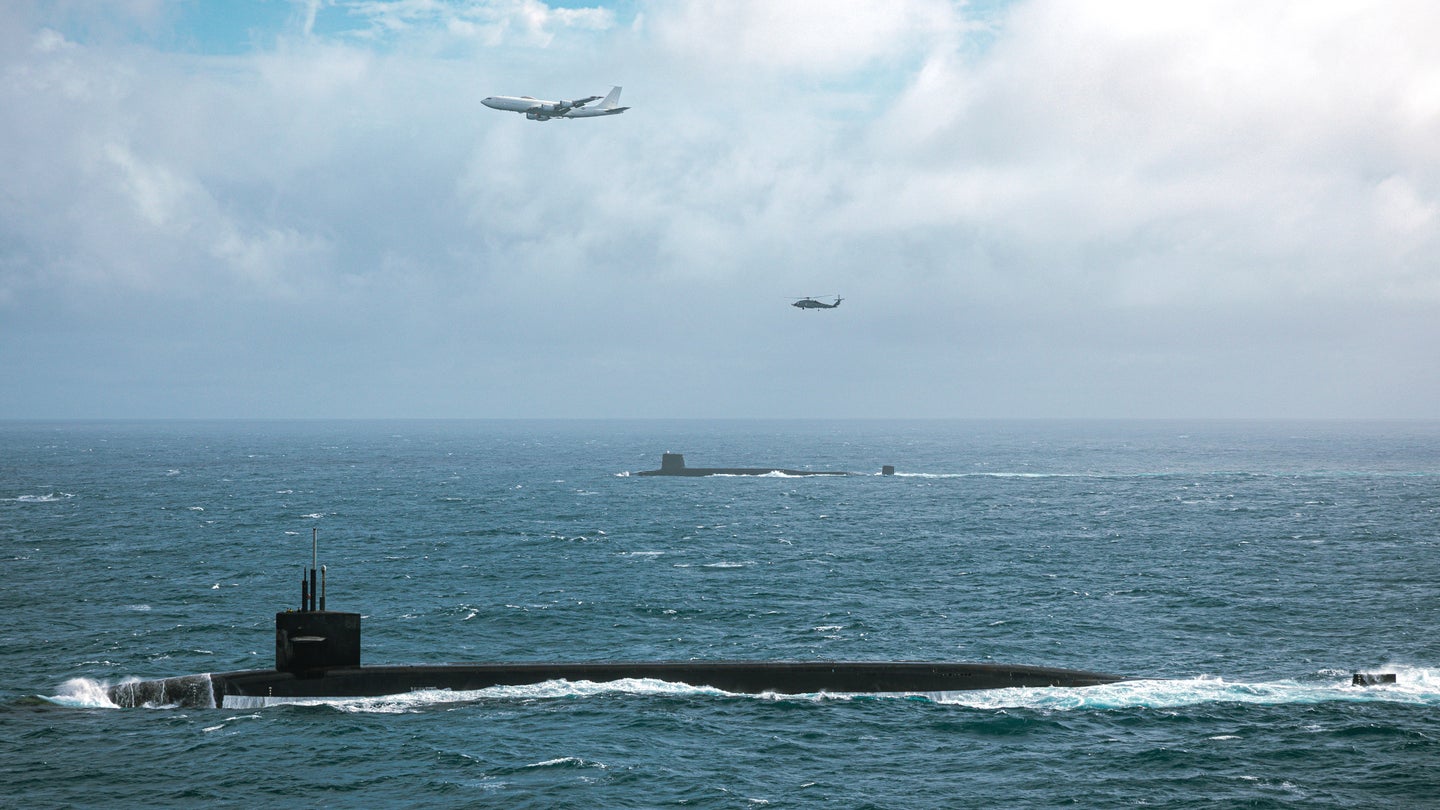 This is just the latest example this year of a highly unusual disclosure related to the Navy’s 14 Ohio class ballistic missile submarines, or SSBNs, as well as the four other Ohios that have been converted into guided missile submarines, or SSGNs. Just since October, the Navy has publicly announced USS West Virginia‘s presence in the Arabian Sea and subsequent arrival at the British island territory of Diego Garcia in the Indian Ocean, which hosts a significant American military presence, as well as a port visit by USS Rhode Island to the British naval base in Gibraltar.

Typically, the U.S. Navy offers few, if any details about what its SSBNs, also referred to as boomers, are doing at sea or their whereabouts. When on patrol, these boats are intended to effectively disappear as part of their mission to provide a credible second-strike deterrent capability.

For the same general reasons, the British government is even tighter-lipped about its Vanguard class submarines, of which the Royal Navy has four.

The newly released picture of USS Tennessee and the unknown Vanguard class submarines sailing together also shows an E-6B Mercury aircraft from Fleet Air Reconnaissance Squadron Four (VQ-4) and an MH-60R Seahawk helicopter from Helicopter Maritime Strike Squadron 72 (HSM-72) flying overhead. The E-6B is a so-called “doomsday plane” that is specifically designed to securely communicate with Ohio SSBNs, including when they are submerged, as well as with other elements of America’s nuclear triad, and, if called upon, to issue orders to launch a strike.

It’s unclear where the picture of the submarines and aircraft was taken beyond that it was shot somewhere in the Atlantic Ocean on November 22. However, it is worth noting that the Navy’s Submarine Force Atlantic, which is headquartered at Naval Support Activity Hampton Roads in Virginia and primarily oversees Navy submarine operations in the northwestern Atlantic, released the photo. In addition, Helicopter Maritime Strike Squadron 72 is based at Naval Air Station Jacksonville in Florida, though the MH-60R could have been assigned to a Navy warship at sea. British Vanguard submarines do regularly travel to the U.S. Navy’s ranges in the Atlantic off Florida for training and other purposes, including to conduct routine test launches of Trident D5 missiles.

The newly revealed “bi-lateral at sea training” involving USS Tennessee and the Vanguard class boat was “designed to validate tactics, techniques, and procedures which strengthens the relationship between uniquely close Allies in support of deterrence and collective security,” according to a caption accompanying the picture. “The United States and the United Kingdom have a long-standing agreement of cooperation in the development and deployment of strategic weapons and supporting system[s].”

Both U.S. Navy Ohio SSBNs and Royal Navy Vanguards are armed with U.S.-designed Trident D5 submarine-launched ballistic missiles, also known as Trident IIs. An Ohio SSBN can carry up to 20 of these missiles, while the Vanguard can be loaded with up to 16 of them. It is understood that American boomers typically carry a reduced load of D5s due to arms control treaties between the United States and Russia.

The Trident D5 has a so-called multiple independently-targetable reentry vehicle (MIRV) configuration, as well, meaning that each missile carries multiple nuclear warheads. In the case of U.S. Navy missiles, they can be loaded with differing numbers of W76-1 or W88 warheads. British missiles are reportedly fitted with domestically-designed warheads, but which are widely believed to be very close to the U.S. W76-series design.

The U.S. Navy now also deploys Ohio SSBNs with Trident D5 missiles loaded with just one or two lower-yield W76-2 warheads, which are intended to help provide a more flexible deterrent, as you can read more about here. In 2020, USS Tennessee reportedly became the first of these submarines to head out on patrol with missiles fitted with W76-2s.

Tennessee was also the first Ohio to fire a Trident D5 missile in 1989 and this new picture of the boat alongside one of its British counterparts was released today, which happens to be the anniversary of its commissioning in 1986. This particular submarine is also one of the Ohios known to have received an advanced flank sonar array, improving its ability to spot and track potential threats, which was installed as part of a refit that was completed last year, as you can read more about here.

It’s also worth noting that both the U.S. Navy and the Royal Navy are expecting to receive entirely new classes of SSBNs – the Columbia and Dreadnaught classes, respectively – in the early 2030s. The two types of boomers have been designed with significant degrees of commonality both in aspects of their construction and certain mission systems, and will continue to be armed with Trident D5s.

Despite the caption for the picture of the two boomers sailing together in the Atlantic describing their activities simply as training, it is difficult not to view it as a show of force aimed at potential adversaries and as a demonstration of both countries’ commitments to each other, as well as their respective allies and partners. It’s also a very pointed display of the powerful second-strike nuclear deterrents the two nations possess.

Though the actual event occurred in November, the disclosure comes just days after Russian President Vladimir Putin alluded to the possibility of formally dropping his country’s ‘no first use’ policy regarding the employment of nuclear weapons. This is just the latest nuclear saber-rattling from Putin and others in his country since the Russian military launched an all-out invasion of Ukraine in February, though experts continue to see the actual risks of nuclear escalation as relatively low, something you can read more about here.

The governments in the United States and the United Kingdom have also identified China as a top national security challenge. American and British authorities have both expressed concerns about the increasingly worrying prospect of a conflict over Taiwan or various territorial disputes, such as in the hotly contested South China Sea, among other things. U.S. military officials have been expressing fears that China’s expanding nuclear arsenal, as well as its development of novel strategic capabilities, such as a fractional orbital bombardment-like system that utilizes a hypersonic glide vehicle, could undermine America’s nuclear deterrent.

The closeness in ties between the United States and the United Kingdom means that the two countries could well find each other operating side by side militarily in other potential flashpoints around the world, too.

No matter what, the picture of the USS Tennessee and the Vanguard class submarine sailing together is a highly unusual public showing of the two countries’ nuclear deterrent capabilities and their ability to work together should they ever be called upon.