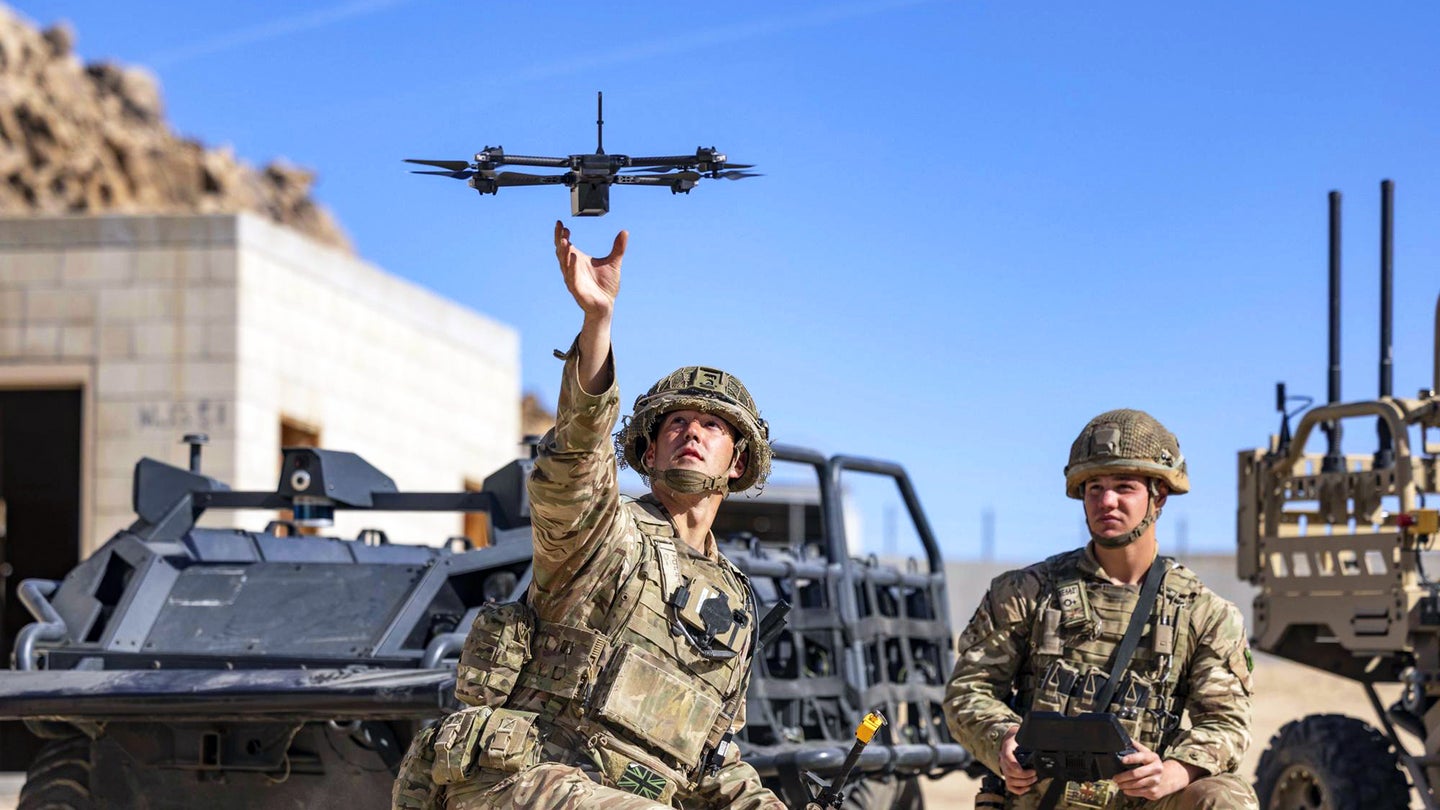 The U.S. Army has officially completed its planned fielding of the RQ-28A short-range reconnaissance (SRR) quadcopter drone system. The aircraft is produced by California-based drone manufacturer Skydio, which won the Army’s SRR competition in February of this year. RQ-28A is the Army’s first program of record quadcopter drone, setting the stage for the service’s future with these systems.

Fielding of the RQ-28A was completed in early November by the Army’s Unmanned Aircraft Systems (UAS) Project Office with the 3rd Battalion, 75th Ranger Regiment at Fort Benning in Georgia, according to the Army. Before then, soldiers had spent a few weeks practicing on the 30 RQ-28A drones that were delivered to the Small UAS Master Trainer Schoolhouse at Fort Benning in September of this year, which is the Army’s only Group 1 UAS Master Trainer course used to qualify soldiers on Group 1 UAS systems, like the RQ-11B Raven. It is unclear which Army units will field the RQ-28A beyond these two entities, but The War Zone has reached out to Fort Benning for clarification and is awaiting a response.

UAS Project Office leaders and personnel traveled to Fort Benning for the final day of training where they could get a firsthand look at how the RA-28A will be integrated with the Army at the platoon level. This is a defining aspect of the Army’s SRR program, which is described by the service as an effort to develop an inexpensive, rucksack-portable, vertical take-off and landing (VTOL) small unmanned aircraft to provide rapidly deployable intelligence, surveillance, and reconnaissance (ISR) capabilities.

“The SRR RQ-28A capability will provide game-changing technology to Army platoons, enhancing both Soldier lethality and survivability,” said Carson L. Wakefield, product lead for Soldier UAS. “It is a new capability for the Army, and I am so proud of my team for delivering an innovative solution in just under three years from prototype to delivery.”

While exact performance and technical specifications for the RQ-28A in its final form have yet to be released by the Army, the aircraft that all indications would point to it being based on is Skydio’s X2D drone. As noted in The War Zone’s past report on the aircraft, the X2D measures 11.9” x 5.5” x 3.6” when folded, and 26.1” x 22.4” x 8.3” when unfolded. Its weight — battery and all — clocks in at just under three pounds, and the company claims that its foldable carbon fiber and magnesium frame can be deployed in under 75 seconds. It is worth noting that while it seems all but certain that the RQ-28A is simply a military-designated X2D configuration, The War Zone did ask the Army for confirmation and has yet to hear back.

Army platoons will operate the aircraft using its proprietary controller equipped with a 6.8” LED touchscreen capable of displaying a 720p video feed. With the help of an internal antenna, operators will use this controller to communicate with the RQ-28A while the aircraft is in flight from up to 3.6 miles (6 km) away utilizing a 5 GHz wireless connection, though the range is dependent on various environmental factors. Additionally, Skydio says that X2D can fly for up to 35 minutes in both day and night time conditions.

The company has also designed the drone with 360-degree obstacle avoidance and an artificial intelligence-enabled ability to detect both humans and vehicles using its 4K-resolution navigation cameras with 16x digital zoom and dual sensor payload that includes a 12MP color camera and FLIR thermal sensor. A software add-on dubbed Skydio 3D Scan can be leveraged to help automate the image capture process, allowing the drone to take 3D scans of its surrounding environment and then feed the renders back to the operator. Skydio highlights the X2D’s autonomous overwatch capability as well, which is when the drone essentially orbits a target of interest while transmitting reconnaissance info down to the operator in real time.

“It’s very intuitive with great obstacle avoidance, additionally the thermal is better than expected,” said Staff Sgt. Adam McDevitt the UAS section platoon sergeant. “I can’t wait to use this on full mission profiles to see what it can really do.”

Using these technologies, the Army believes that the RQ-28A will achieve the squad-level situational awareness and scouting capability that the service has been seeking under its SRR program. Integrating smaller drones with smaller units will provide valuable surveillance and reconnaissance capabilities for the Army, helping to prevent units from running into ambushes and avoiding threats altogether. It will also help with planning offensive battlefield movements. Needless to say, RQ-28A appears set to capitalize on how even small commercial-type drones can be very useful in localized battlefield contexts, as has been exemplified throughout the conflict in Ukraine.

The Army’s SRR initiative is just one-third of a multi-tier plan that includes the Medium Range Reconnaissance (MRR) and Long Range Reconnaissance (LRR) programs, too, each of which falls under the service’s larger Rucksack Portable Unmanned Aircraft System (RPUAS) family of small UAS. Army budget documents have revealed that MRR will utilize existing RQ-11 systems and that the LRR capability is under development. While this kind of capability is evidently being prioritized by the Army, there do not appear to be plans to arm SRR at this time.

Knowing that quadcopter drones, both armed and unarmed, are set to only continue proliferating on the battlefield, the Army has been grappling with not only that threat but also how exactly the service can leverage the capability itself. The National Training Center at Fort Irwin in California has been an especially active hub of innovation in this regard, with the installation participating in various exercises meant to test the Army’s ability to counter drone swarms as well as network and operate their own. While the SSR is not focused on swarming capabilities, it is a step in that direction and operating these drones in the field will only add to the knowledge base of how to advance the technology and especially its implementation on the battlefield.

Skydio’s SRR contract with the Army is valued at a total of $99.8 million a year for the next five years. The Army says that 480 RQ-28As are slated to arrive for fielding across the Army sometime next year on top of the 30 that were delivered to the schoolhouse in September. A total of 1,080 drones have been purchased by the service and will be delivered during low-rate initial production through the second quarter of Fiscal Year 2025.

All told, the introduction of RQ-28A among Army platoons will usher in a new chapter of drone operations for the service. In fact, as noted by Sgt. 1st Class Matthew Quick, the senior NCO for master training at the schoolhouse, since the RQ-28A is the Army’s first-ever rucksack-portable quadcopter for platoon-level integration, there are no current tactics, techniques, or procedures (TTP) employed for operating the system. The fielding process was especially important in establishing these guidelines going forward, as it allowed the Army to experiment with and familiarize itself with the RQ-28A to better develop the necessary TTPs.

While this fielding milestone is a big step forward, the service says that it’s only the first tranche of the overall SRR program and that tranche two will include a prototyping effort to better flesh out “requirements and performance objectives.”

In short, the RQ-28A’s time with the Army is just beginning.