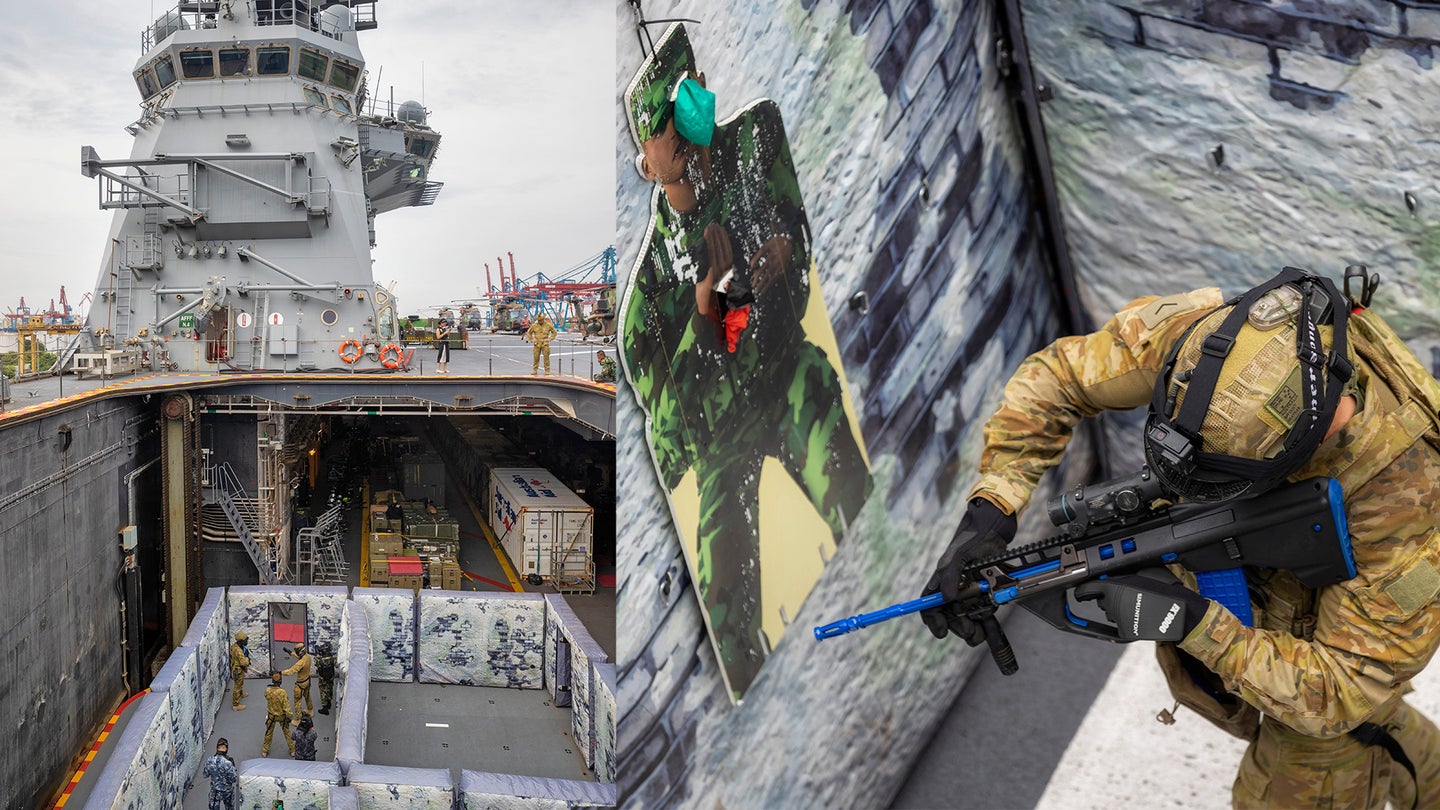 The exercise took place on November 25 in Jakarta, Indonesia. HMAS Adelaide was docked in Indonesia’s capital for three days in total, from November 23 to 26, as part of Indo-Pacific Endeavour 2022 (IPE22). This is one of Australia’s key regional engagement activities designed to strengthen its military partnerships while bringing stability to the Indo-Pacific region. IPE22 is one of a number of exercises this year where Australian military forces have aimed to fulfill both these objectives.

Although the official photo captions don’t explicitly say what kind of drills the soldiers conducted beyond “urban training,” the photos indicate they engaged in various close-quarters combat drills.

After receiving an initial brief ahead of the exercise, we see Australian and Indonesian soldiers take to the improvised ‘shoothouse’. Equipped with protective vests and headgear, two personnel enter the ‘shoothouse’ and begin to make their way through the course.

Both soldiers sport F90 rifle replicas/training conversions, which feature distinct blue barrels and magazines. It’s unclear from the photos whether these rifles are ‘airsoft’ replicas, which are often favored by the police and military in training situations, or if they denote firearms that were converted for the exercise. Simunitions and Ultimate Training Munitions (UTM) kits, for example, feature predominantly blue-colored components, so it’s possible the soldiers may have been using real weapons adapted for safety in the context of the exercise.

Targets can be seen fixed to the ‘shoothouse’s’ inflatable walls. What appear to be balloons are attached to the heads and chest of the targets, which give the soldiers an indication of when targets were positively ‘hit’. Although it’s not immediately clear if the targets were meant to represent specific soldiers, the camouflage pattern seen on their caps appears to resemble ‘Type 99’ used by China’s People’s Liberation Army (PLA).

From the official photos, it seems that the inflatable ‘shoothouse’ was provided by survival technology company Survitec (the company’s logo can be seen embossed on the wall’s edge in the image above). According to Survitec’s website, its products provide the “infrastructure required to teach, train and practice urban Close Quarter Battle (CQB) skills and drills.” It would also appear that a variation of Survitec’s “Level 1” inflatable training system (its smallest inflatable training course) was used in the exercise.

A wide-perspective photo of the exercise taking place shows several soldiers engaged in a close-quarters drill below.

In another photo, an Australian soldier wears what seems to be a GoPro-style head camera, indicating the exercise may have been recorded or live-streamed for fellow soldiers to watch.

‘Shoothouses’ are key training aids for troops and law enforcement preparing for close-quarters battle in urban environments, but also aboard vessels and even airliners in anti-terrorism and hostage rescue scenarios. These facilities range from fairly simplistic installations made of plywood, or in this case, inflatables, to very elaborate live-fire ones, including those embedded in full-on military operations in urban terrain (MOUT) installations that can mimic entire towns. They focus on improving every part of a team’s movements, communications, and use of non-lethal munitions, as well as breaching, the identification of friend-or foe (not killing non-combatant targets), and accuracy. Speed of action is obviously another major factor. Check out some ‘shoothouses’ in operation in the videos below.

It should be noted that using this space for close-quarters combat training has a number of advantages. While the exercise aboard HMAS Adelaide was conducted in port, it could also easily be performed at sea – forgoing the need for dedicated training facilities in the execution of this type of exercise. The exercise itself also makes a lot of sense for Australian expeditionary forces, which could easily find themselves dispatched ashore from an amphibious assault ship such as Adelaide to conduct urban close-quarters operations. Depending on the intel available, the inflatable shoothouse could, theoretically, be configured to practice maneuvers and role-play scenarios for specific missions. But just being able to keep these perishable skills fresh while underway is a huge advantage.

Welcoming allied forces aboard Australian naval vessels, and strengthening relationships through joint exercises with neighbors and partners, were key components of IPE22 for Australia. Compared to last year’s engagements, which were restricted due to the impact of the Coronavirus, IPE22 allowed for more interaction between Australian military personnel and their allies.

As Lieutenant General Greg Bilton, Australia’s Chief of Joint Operations, emphasized after IPE22’s conclusion, IPE22 was designed to enhance regional stability in the Indo-Pacific by underscoring inter-allied unity and cooperation:

“IPE22 is a clear demonstration of Australia’s enduring commitment to an open, inclusive and resilient Indo‑Pacific … IPE22 provided a chance for our personnel to build personal links across the region, from meeting senior military commanders to visiting schools and communities. This helped deepen mutual understanding.”

All in all, the close-quarters exercise sought to combine practicable urban warfare training with inter-allied engagement, underlying the aims and purpose of IPE22. Above that, they give us a unique insight into shipboard tactical training capabilities.

The post Aussies Created A ‘Shoothouse’ On Their Amphibious Assault Ship’s Aircraft Elevator appeared first on The Drive.