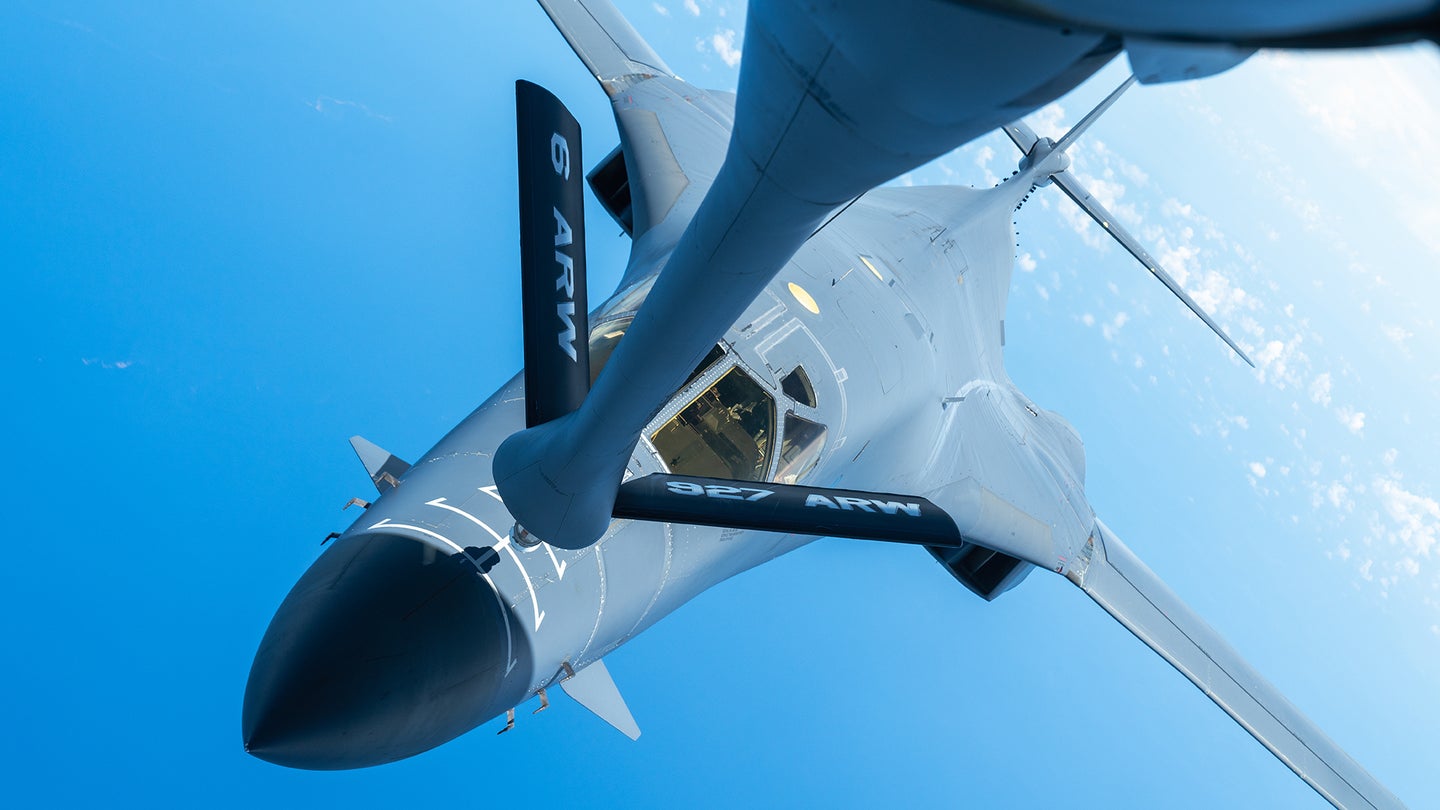 U.S. Air Force B-1B bombers flying from Dyess Air Force Base in Texas kept watch for signs of illegal fishing during recent sorties over the eastern end of the Pacific off the coast of Ecuador and around that country’s Galapagos Islands. This would seem to be an unusual mission for the B-1Bs, which is a highly capable long-range strike platform, but it is actually not the first time the bombers have supported international law enforcement activities as a way to practice skill sets in a real-world environment.

The recent B-1B flights also highlight the Air Force’s current interest in expanding the B-1B’s maritime role, with a particular eye toward anti-ship missions during future high-end conflicts, especially in the Pacific. In addition, the U.S. military has become increasingly interested in ways to help challenge malign Chinese activities short of conflict, including with regard to things like illegal fishing, in the broader Indo-Pacific region and beyond.

At least two B-1Bs from the Dyess-based 7th Bomb Wing took part in this mission, which took place on September 7. The Air Force described the sorties as countering “illegal, unreported, and unregulated (IUU) fishing” in the course of a broader Continental United States (CONUS) Bomber Task Force (BTF) operation conducted in cooperation with the governments of Ecuador and Panama. KC-135 aerial refueling tankers flying from MacDill Air Force Base in Florida supported the B-1Bs. It’s unclear if any action was taken with regard to suspected illegal fish boats from information provided by the bomber crews.

“This kind of regional military engagement strengthens our partnership with Ecuador and Panama and enhances interoperability and improves our collective readiness for a range of potential future operations – from disaster relief to humanitarian assistance to security operations,” according to a statement from U.S. Southern Command. “When our forces train alongside one another we improve our ability to work together in times of crisis.”

“There are certain things that only Air Force Global Strike Command Airmen can do, and this is one of them,” Air Force Col. John McClung, head of the 7th Bomb Wing’s 7th Operations Group, also said regarding the eastern Pacific sorties. “Based on the Airmen we have in this room, we can fly this mission and then turn around and regenerate in a matter of hours – we make it look easy, but it’s tough work.”

The primary mission of the Air Force B-1Bs, with their ability to carry up to 75,000 pounds of various kinds of munitions in their bomb bays to targets thousands of miles away, is to act as long-range strike aircraft. They’ve proved their worth as close air support platforms while supporting combat operations over Iraq, Syria, and Afghanistan, too. Though the service is pushing ahead with its plans to retire these bombers entirely by 2036, it is still working to improve the capabilities of those that remain in service now, including with the integration of new weapons and the restoration of their ability to carry weapons on external pylons.

However, this is not the first time that the Air Force has also demonstrated the B-1B’s ability to also act as an impromptu long-range surveillance platform, including in support of non-combat missions, thanks to its AN/AAQ-33 Sniper Advanced Targeting Pod (ATP).

This role is referred to as non-traditional intelligence, surveillance, and reconnaissance, or NTISR. Sniper has electro-optical and infrared full-motion video cameras as well as datalink capabilities and can be used to help identify objects of interest down below, track moving targets, and generate GPS coordinates for specific points on the surface – all capabilities that fit well with the NTISR mission.

B-1Bs, as well as Air Force B-52s, have flown other kinds of NTISR missions in the past, notably over the Caribbean searching for possible drug-smuggling boats in support of regional counter-narcotics efforts. You can read more about those operations in this past War Zone piece.

In addition to providing NTISR support, B-1B flights in support of things like counter-narcotics or counter-illegal fishing operations offer valuable real-world opportunities to practice various skill sets, potentially involving the identification and tracking of actual unpredictable targets. Experience gained on these sorties could be applicable, at least in some ways, in future combat sorties, especially in maritime environments.

As already noted, the Air Force has been looking to expand the B-1B’s ability to take part in maritime operations in recent years, with a particular eye toward a future high-end conflict against a near-peer adversary, such as China or Russia. The U.S. military has also been increasingly sounding the alarm about growing threats to the U.S. homeland, particularly the increasing possibility of hostile cruise missile strikes from ships and submarines off the nation’s Pacific and Atlantic coastlines during a major conflict.

“We are in competition in our own hemisphere,” Air Force Col. Joseph Kramer, the 7th Bomb Wing’s commander, said in a statement about the recent eastern Pacific sorties. “These bomber missions demonstrate our ability to respond to threats in today’s complex, dynamic and volatile global security environment anytime, anywhere.”

At the same time, as mundane as it might sound at first, illegal fishing is an increasingly serious international security issue, especially in the Pacific Region, in its own right. Chinese fishing fleets are regularly accused of engaging in illegal fishing activities. At least some of this appears all but certainly be inextricably intertwined with Beijing’s efforts to solidify expansive and widely disputed territorial claims, including in the hotly contested South China Sea, and otherwise apply political and economic pressure on various countries.

The Galapagos, one of the focal points of the recent B-1B sorties, has been a particular flashpoint for these issues. The islands are a UNESCO-recognized World Heritage Site and biosphere reserve and the Ecuadorean government has declared a 27,000-square-mile marine reserve around them, a protected maritime area that is second only in size to the one surrounding the Great Barrier Reef.

However, a 2020 report from marine conservation group Oceana said that Chinese fishing boat fleets had accounted for virtually all of the observed fishing near the Galapagos between July 2019 and August 2020, and had carried out 73,000 total hours of fishing in just one month within that period. Similar activity has been observed around these islands since then, as can be seen in the video below.

In June, U.S. President Joe Biden signed the first ever National Security memo specifically focused on illegal fishing, which directed the Department of Defense and other federal agencies to step up cooperation and coordination to help better counter these activities. The same month, the members of the Quadrilateral Security Dialogue – the United States, Australia, India, and Japan – announced plans to use space-based surveillance to help monitor illegal fishing.

So, countering illegal fishing is something that the U.S. military, as well as other elements of the U.S. government, may increasingly find itself involved in, directly and indirectly, as part of larger strategies to counter China. In fact, a joint U.S. Navy-Marine Corps-Coast Guard naval strategy unveiled in 2020 highlighted a need to work harder to respond to day-to-day maritime challenges from the Chinese, and to a lesser extent, the Russians, including more monitoring of malign activities short of war.

“Together with international and whole-of-government efforts, the Naval Service will detect and document our rivals’ actions that violate international law,  steal resources, and infringe upon the sovereignty of other nations. We will provide evidence of malign activities to U.S. and international officials to expose this behavior and increase the reputational costs for aggressors,” an official white paper on the strategy explained. “Forward naval forces, leveraging our complementary law-enforcement authorities and military capabilities, will stand ready to disrupt malign activities through assertive operations. Our expanded efforts will refute the false narratives of our rivals and demonstrate the United States’ commitment to protecting the rules-based order.”

That same document criticized the Chinese government specifically for, among other things, its “state-subsidized distant-water fishing fleet [that] steals vital resources from nations unable to defend their own exclusive economic zones.”

Whether B-1Bs end up supporting counter-illegal fishing operations on any kind of regular basis remains to be seen, though it does seem somewhat unlikely given the costs of operating these bombers and demands for them to be available to support more traditional military missions. The Air Force has also been working hard to improve the overall readiness of the B-1B fleet, in part by shrinking the operational tempo, after years of exhaustive use over Iraq, Syria, and Afghanistan.

In terms of U.S. military assets, U.S. Navy P-8A Poseidon maritime patrol planes would be far better suited to this mission. Unmanned aircraft designed to conduct persistent broad-area intelligence, surveillance, and reconnaissance (ISR) operations, such as the Navy’s MQ-4C Tritons or Q-9 Reaper series, would be another option. Persistent maritime surveillance is one mission envisioned for future very-high-flying drones with extremely high endurance like the Airbus Zephyr S, an example of which recently crashed in Arizona after more than two months aloft as part of a U.S. Army test.

Smaller commercial-derived platforms, especially business jet and turboprop aircraft, configured for intelligence, surveillance, and reconnaissance (ISR) missions, present another far more economical platform. This is something The War Zone has noted in the past when discussing using bombers in the NTISR role in support of counter-narcotics operations. The U.S. military already employs contractor-operated ISR aircraft for counter-drug missions.

There is still the possibility that B-1Bs could fly more sporadic counter-illegal fishing sorites as a way to help hone skills that could be valuable in future maritime combat operations, especially in the Pacific, while also providing useful real-world support to allies and partners.