B-21 Raider Test Pilots Talk About Its Upcoming First Flight 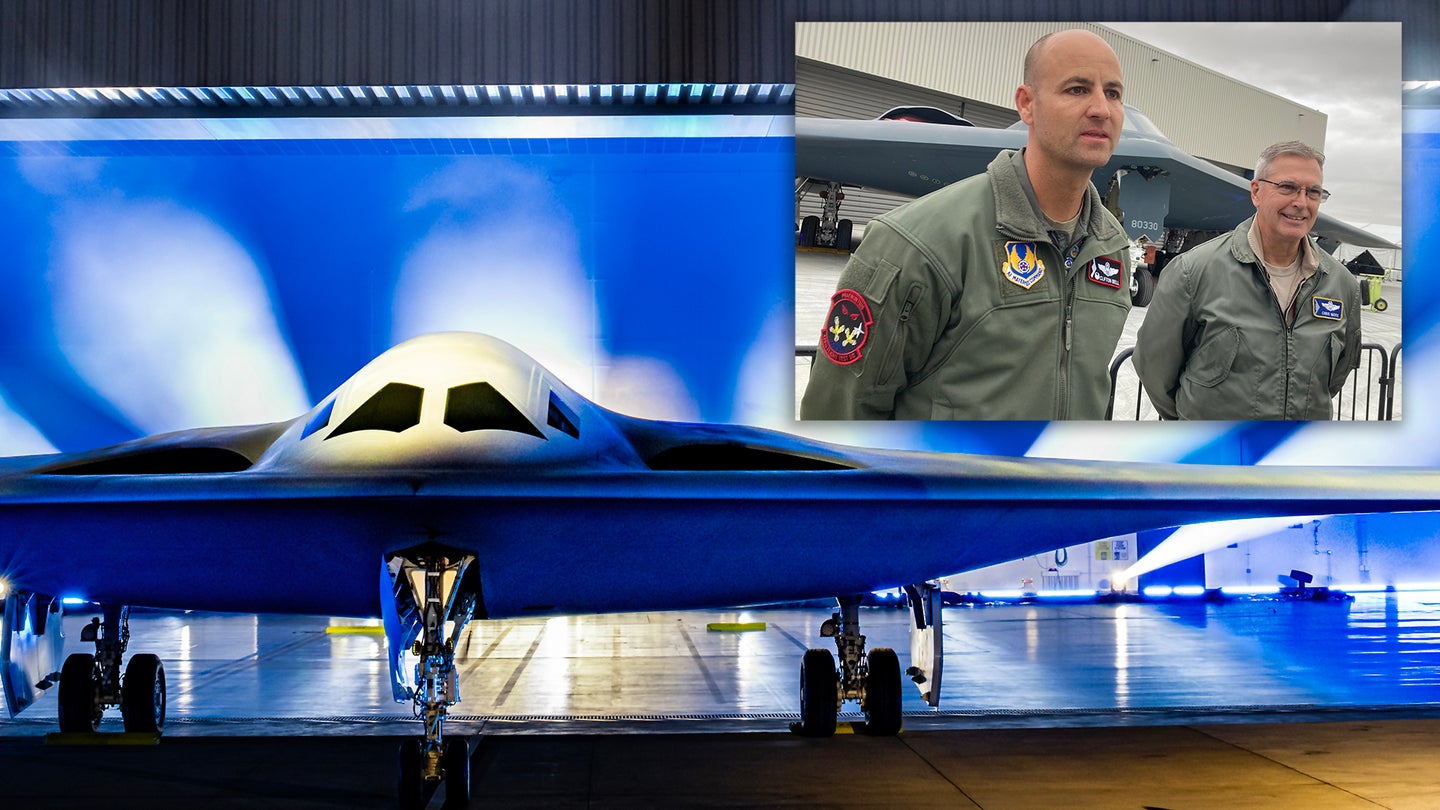 Sometime next year, if all goes according to plan, Air Force Lt. Col. Clifton Bell and Northrop Grumman test pilot Chris Moss will be the first, or at least among the first, to take the B-21 Raider known as T1 into the air, making the first flight of the deep penetrating bomber designed to be the most advanced stealth warplane ever built.

It will be the first test flight of a new American bomber in 33 years. That’s when the B-2 Spirit, the world’s first stealth bomber, took off from Northrop Grumman’s sprawling and high-security production facility at Plant 42 in Palmdale, and landed 112 minutes later at Edwards Air Force Base. There it would enter into developmental flight testing with the 420th Flight Test Squadron (FLTS).

The honor and sense of historic significance of this assignment are not lost on either man. Along with Air Force Lt. Col. Joshua “Crash” Schneider, deputy B-21 program manager, reporters from The War Zone and several other publications interviewed the men in front of a static display of a B-2 at Plant 42, just two hours before Friday’s ceremony unveiling the Raider to the world. You can read more about that, and our initial assessment of the plane’s capability based on the unveiling, in our coverage here.

“There are a few things in your career that you never expect to happen,” said Bell, commander of the 420th FLTS, which was reactivated three years ago to plan, test, analyze and report on all flight and ground testing of the B-21 Raider. “You make choices based on what you think’s good for you and your family and also what’s good for why you put on the uniform to begin with and for the nation. And sometimes you get opportunities like this.”

It’s unknown at the moment exactly when that opportunity will take place. Air Force and Northrop Grumman officials have set a firm date yet for its first flight.

But regardless of when, Bell and Moss have already been working on the ground in simulators and in the air in a specially-outfitted Gulfstream V long-range business jet serving as a flying test bed, to make sure that happens as quickly, and safely, as possible.

It’s all part of an effort by Northrop Grumman — which won the contract to develop the B-21 in 2015 — to fulfill the Air Force’s desire to conduct flight tests with a more mature, largely production-representative bomber as opposed to a still relatively experimental one. The goal is to shorten the otherwise lengthy testing periods that non production-representative test aircraft typically require. You can read our report on this facet of the program here.

“One of the key tenants of the program has been risk reduction, and really focusing on doing as much of that testing upfront to reduce risk,” said Schneider.

The Raider is the first U.S. warplane to be digitally designed and tested from the the outset, meaning that Northrop Grumman was able to reduce the risk of developing the plane by making and addressing mistakes in a virtual environment instead of during flight testing — a luxury that older military development programs haven’t had historically.

“There are all the different preparations that take place,” said Bell. “Obviously, we have a whole test team building out, ‘hey, what test points do we need to fly to make sure we get the correct data to ensure that the aircraft is safe and effective to execute the mission?’”

In May, Northrop Grumman successfully completed the first — and most critical — loads calibration test of the first B-21 aircraft. That test, focusing on calibrating instrumentation prior to flight and verifying structural integrity, “yielded positive and consistent results,” according to a Northrop Grumman media release at the time. “During testing, the B-21’s airframe endures varying percentages of stress to ensure the aircraft can proceed on its path to flight readiness.”

As an example of how well the digital design process worked, Schneider said “when I look at the testing that we did for loads calibration for T1, the models were very, very accurate to that and so we’re very comfortable and really happy with with the results from those models. And that’s a great example of what we’ve seen across the program.”

Loads calibration testing is just the first of the conditions the aircraft has to meet during its ground testing phase. In the coming months, the team will power up the aircraft, test its subsystems, and apply coatings. The next steps will include carrying out engine runs as well as low-speed and high-speed taxi tests, and then on to the first flight.

The input of those who will fly the aircraft is a big part of the design process.

“On an aircrew level, we have simulators and the ability to sit down, learn the systems, get to know them,” said Bell.

Among the simulators Bell and Moss have worked on is a handling quality simulator, “which allows us to not only evaluate but get comfortable with and understand the flight control systems and how it works on the aircraft,” said Bell. “Just basic knowledge of the systems in the aircraft is a good start. Both of us have been on the program a long time, so we have a lot of depth of knowledge on that. But then also being able to execute those systems and know the difference between something going wrong and the way the system operates – we spent a lot of time in simulators working on that.”

Beyond ground-based simulators, Bell and Moss have also been testing out systems on the Gulfstream V.

“Northrop Grumman has invested in a GV that they’ve used to go in and put systems onto and be able to test those in flight versus having to simulate things on the ground,” Schneider said. “So that allows us to mature both the hardware and the software aspects of that before” they have access to the B-21.

But more than just getting to know how the systems work, the pilots are helping to develop them.

“We’ve actually had the chance to help develop how the flying qualities of the aircraft is going to be,” said Moss. “Not just in learning how it flies, but also help, ‘hey, this doesn’t feel the right way’ or help adjust the handling quality airplane.”

In areas, “where it might not be great, we help figure out how to make it great,” Moss said. “And we’ve been doing that for at least the last six months. We’ve been doing some extensive simulator evals on the handling qualities.”

Moss said that he and Bell are offering input like, ‘hey, where do we need to adjust that, or hey, it’s just right.’”

It’s one thing to train in simulators and testbeds, but another thing entirely to actually fly an aircraft for the first time.

That too is not lost on the test pilots.

“As it was mentioned earlier, we can’t validate the model till we actually go and fly,” said Moss. “So all we can do is be prepared for everything that we think may be a problem, or could be a problem.”

The flight test industry, said Moss, has a lot of experience “about things that could go wrong on the first flight. We use lessons learned all the time from other flight test programs. What did they miss? Where do we need to look? What kind of things did they not think was a problem and ended up being a big problem? Because a lot of times the things that surprised you the most are little things that you didn’t think that would have any issues at all.”

The post B-21 Raider Test Pilots Talk About Its Upcoming First Flight appeared first on The Drive.