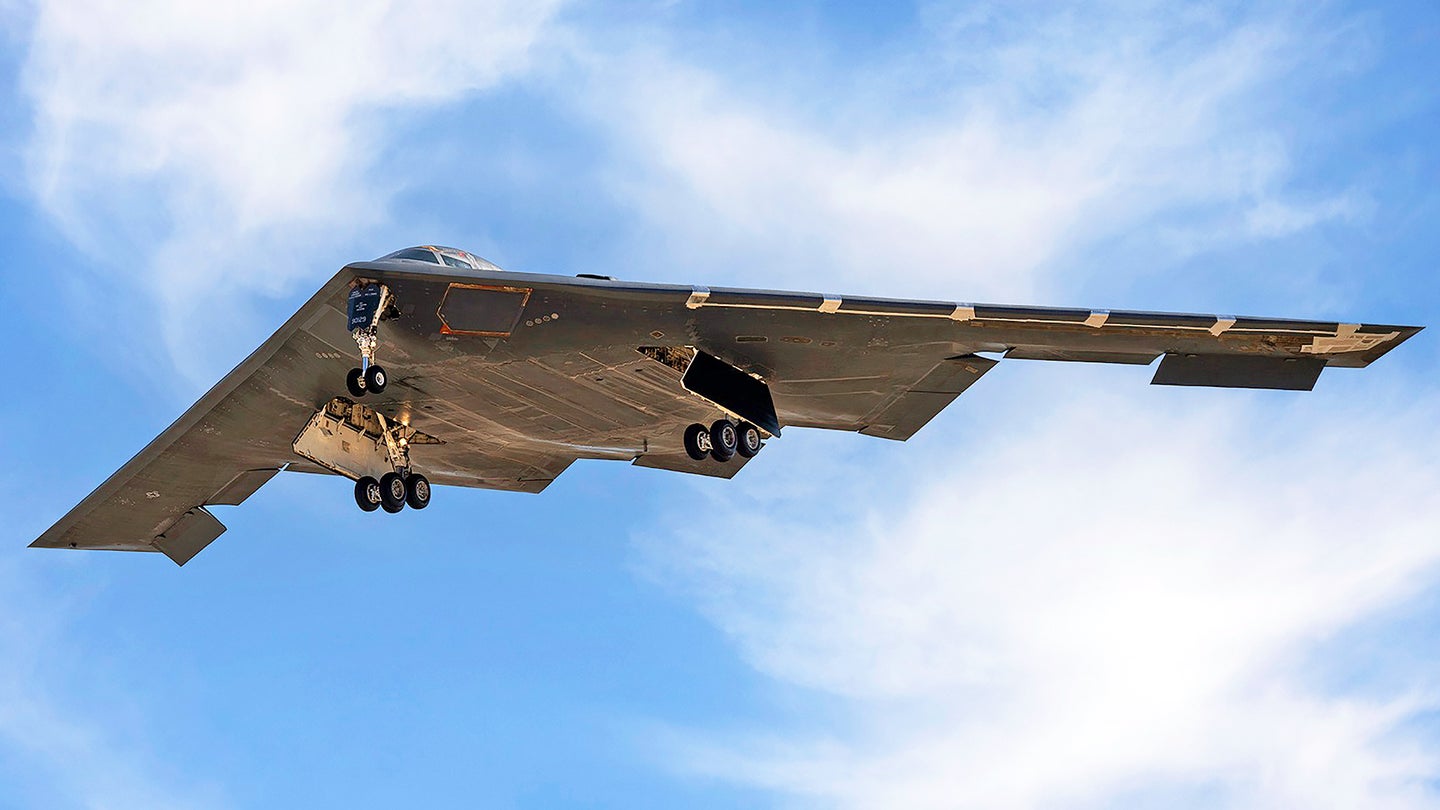 A U.S. Air Force B-2 bomber nicknamed the Spirit of Georgia has touched down at Plant 42 in Palmdale California just over a year after skidding off the runway at Whiteman Air Force Base in Missouri. Today, the aircraft flew to Plant 42 after receiving temporary repairs at Whiteman, and will now undergo a more substantial restoration so that it can return to the fleet. The War Zone was the first to report on the initial mishap, which took place on September 14, 2021, and publish satellite imagery showing the bomber lying on the grass.

Photographer Tom Jordan grabbed the pictures of the Spirit of Georgia, also known by its serial number 89-0129, seen at the top of this story and below, as the bomber came in to land at Plant 42 earlier today. All of the B-2 bombers were built at Northrop Grumman’s facility at Plant 42 and it is where they still go for all major upgrades and overhauls, as well as other large-scale maintenance.

Speed tape is seen along various areas of the leading edge and near the tip of the aircraft’s left wing. The edge of the large composite radome panel underneath the left side of the central fuselage also shows patina and is without its usual radar attenuating sealant. Other areas of general damage and wear are visible underneath the left wing and on the underside of the central fuselage and atop the aircraft’s cockpit area. But the left wing took the brunt of the damage and you can see where the ground deeply marred its usually smooth surface.

This is all fully in line with the details the Air Force subsequently released regarding the accident in March. Per the official accident report, a pair of worn springs on the left main landing gear assembly did not function as they were supposed to when 89-0129 landed at Whiteman last September. Coupled with a major hydraulic systems failure, which had already prompted the bomber’s crew to declare an inflight emergency, the left main landing gear subsequently collapsed when it touched down. This, in turn, caused the left side of the aircraft to impact the runway and send it careening off onto the nearby grass. The two pilots onboard at the time thankfully did not sustain any injuries from the mishap.

The full scope of the damage remains unclear, but it was clearly substantial. Portions of the aircraft were torn up or, as was the case with the left main landing gear bay door, ripped off entirely.

Among other things, the “contact with the runway caused the bottom half of the left lower rudder to break off,” according to the accident report. “Substantial skid damage to the lower skin caused a large opening, exposing the internal structure of the wing.”

“There is … the potential for internal left wing structural damage, which will require further engineering assessment,” the report added. This, in particular, could help explain the time it took for the aircraft airworthy enough to make the trip to Palmdale.

The B-2’s physical structure includes a number of composite materials and its exterior is covered in equally exotic coatings, the composition of which are highly classified and can be very toxic. The external coatings are particularly sensitive to environmental factors, let alone being dragged across the ground. An initial assessment of the damage pegged the expected repair bill at $10.1 million, at least.

Altogether, while it is certainly common for aircraft involved in certain kinds of accidents to receive initial repairs at the location of the mishap and then make a special ferry flight to another site for more significant maintenance work, the whole process can only have been more complex for the Spirit of Georgia. It will still be some time yet before the bomber returns to active service as its makers give it some much-needed attention.

Another B-2, serial number 88-0332, nicknamed the Spirit of Washington, spent around 18 months at Andersen Air Force on Guam undergoing initial repairs after suffering severe damage in a fire on the ground in February 2010, before making a similar ferry flight back to the United States. That aircraft did not begin flying operationally again until December 2013.

Severely damaged ships and submarines that are still capable of operating under their own power also make similar special post-accident transits to bases with more robust repair facilities. These movements all come with some degree of risk given the partial nature of any fixes carried out before the trip, and often times special performance restrictions and procedures are put in place so as not to stress temporarily repaired areas.

The Air Force does have a significant incentive to take whatever time is necessary, and spend whatever it takes, to get the Spirit of Georgia back on the flight line at Whiteman. The service only has 20 B-2s in total, but the small fleet is a key component of America’s nuclear triad and the bombers are also uniquely capable of performing very long-range conventional strike operations in potentially high-risk environments.

The first example of the Air Force’s newest stealth bomber, the B-21 Raider, is now set to make its public debut in December. However, the first operational B-21 units are still years away from reaching initial operational capability, and will supplant squadrons flying B-2s initially, anyways. The last B-2s are not expected to be retired until the early 2030s.

How long it will ultimately take before 89-0129 returns to active duty remains to be seen, but the fact that the bomber could at least make the flight to Plant 42 within around a year of the initial mishap is at least a positive sign. It also serves as a testament the durability of the B-2’s airframe which was absolutely cutting edge when it was produced and the dedication of all of those who made the flight possible.

Northrop Grumman has gotten back to us with a statement:

“Northrop Grumman’s engineering support to the 509thBomb Wing enabled the ferry flight of aircraft vehicle 0129, the Spirit of Georgia, from Whiteman Air Force Base to Palmdale for scheduled Program Depot Maintenance. In addition to PDM, Northrop Grumman is delivering a series of modernization upgrades to AV 0129 to keep the B-2 fleet mission-ready today and tomorrow.”

The post Bandaged B-2 Bomber Returns To Its Birth Place For Major Repairs appeared first on The Drive.