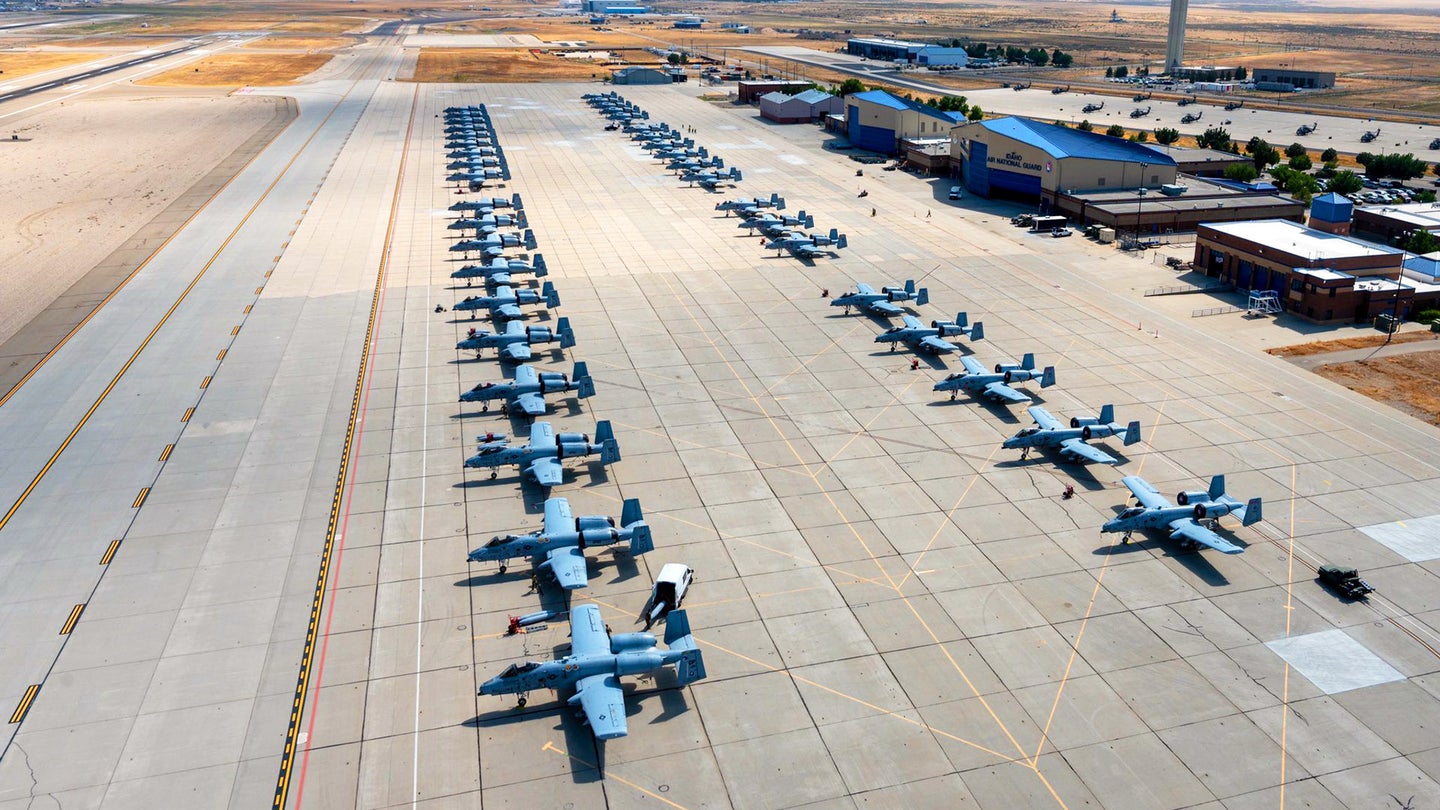 The U.S. Air Force has released a number of striking photos showing 37 A-10 Warthogs in an orderly formation on the flightline at Gowen Field in Boise, Idaho. The Warthogs are from multiple units across the globe, which have gathered in Idaho for the latest iteration of a biennial bombing, missile, and tactical gunnery competition for A-10s dubbed Hawgsmoke.

Hawgsmoke 2022 kicked off on September 6 and will wrap up tonight. This year’s event was hosted by the Idaho Air National Guard’s 124th Fighter Wing, and the snapshots that have already come out of it are impressive. The 37 Warthogs involved in the competition make up more than a tenth of the Air Force’s entire 281-strong fleet all in one place. 150 Pilots, as well as maintainers and weapon teams from 15 active duty, Air National Guard, and Air Force Reserve units, are participating in the overall competition, including the following outfits:

To start the competition, the 124th performed a missing man formation on Tuesday to honor fallen soldiers and mark the beginning of the traditional Hawgsmoke opening ceremony. The Air Force noted that Idaho’s Warhawk Air Museum also performed a flyover with a Curtiss P-40N Warhawk and a Republic P-47D Thunderbolt. It is important to note that the A-10’s official nickname is actually Thunderbolt II, a direct reference to the P-47, and both aircraft were built by the same manufacturer.

Hawgsmoke — a play of the ‘Gunsmoke’ aerial gunnery competitions dating back decades — was first established in 1996 by Col. Cliff Latta, the operations group commander of the 110th Fighter Wing in Battle Creek Michigan, according to Hawgsmoke.com, an unofficial website dedicated to the competition. Latta wanted a way to showcase his unit to the other Air National Guard A-10 squadron at the time, and thus the world’s first Hawgsmoke competition was held that same year in conjunction with the annual Air National Guard A-10 Operations Group Commander meeting.

The 175th Fighter Wing out of Martin State, Maryland, was crowned the winner of the inaugural Hawgsmoke in 1996 and started what would later become a tradition among winning units to host the next competition. However, the military started to lose interest in Hawgsmoke over the next four years, so Latta attempted to reinvigorate the event in 2000 by including every A-10 unit in the Air National Guard, Active Duty, and Air Force Reserves, as continues today.

“Hawgsmoke was established to allow current Hawg Pilots an opportunity to show their stuff,” Latta once said. “The goal was to have a low-key fighter pilot weekend with the comrades … that just happened to have a competition attached.”

The Warthog, however, came long before Hawgsmoke, nearly 20 years before to be exact. The first A-10A was delivered to Arizona’s Davis-Monthan Air Force Base in 1975 intended specifically for close air support missions. The Warthog went on to receive a significant amount of notoriety for its role in the Gulf War where it had a mission-capable rate of 95.7%, flew 8,100 sorties, and launched 90% of the war’s AGM-65 Maverick missiles. The Hawgsmoke competition was introduced five years after the Gulf War ended and by then the aircraft had already retained a legendary reputation.

The most recent competition was Hawgsmoke 2020/2021, which was held last April after being pushed back a year due to complications brought on by the COVID-19 pandemic. After the event’s three-year hiatus, the 190th Fighter Squadron from Boise, Idaho came back to win their third Hawgsmoke competition overall having also been the reigning champions back in 2008 and 2010. The 190th, also known as the Skullbangers, outperformed a total of 12 units to win their third title after exceeding in a number of competitions meant to test maintenance, weapons load crews, and pilots in various combat-reminiscent scenarios. Points are awarded through a number of drills that range from weapons loading to strafing.

“It was awesome,” said Lt. Col. Jason ‘Jodi’ Cobb, 190th Fighter Squadron A-10 instructor pilot in an Air Force press release. “Overall, we came together as a group of A-10 pilots with great camaraderie and esprit de corps for the mission that we are focused on. It’s really exciting to get together with people that we don’t ever get to see and go do what we do, it’s surreal. It’s really a high honor in order to [be a part of] Hawgsmoke.”

The true champion of Hawgsmoke, though, will always be the Warthog. The storied aircraft has evaded complete retirement for decades now. While that day may still come in the not-so-distant future, especially now that support is building in Congress to allow for the retirement of another batch of A-10s, the Air Force is nonetheless working to modernize at least a portion of its A-10 fleet to ensure that it remains a key player in future high-end conflicts. You can read all about what those upgrades will entail in this past War Zone feature, here.

There is also the possibility, albeit remote, that the Warthog could find new life in the skies over Ukraine as the country continues to fight against Russia’s invasion. In fact, resourceful Ukrainians have made it so the country’s fighter pilots have already been able to train on the A-10 with DIY flight simulators in hopes that this day may come. Some Ukrainian officials, however, would instead prefer a more “fast and versatile” system while others ask ‘why not both?’ Regardless, even top U.S. Air Force officials have stated that transferring A-10s to Ukraine is not off the table, and considering they are the biggest proponents of unloading the aircraft, doing so would, at least to some degree, give them a reason to draw down the USAF A-10 force even further.

If the A-10 finally does leave the Air Force’s inventory in the coming years, it will certainly be sad to see Hawgsmoke go along with it. But until then, the A-10 community will continue to make the best out of their aircraft.

With that in mind, it has now been announced that pilots from the 190th have defended their title from last year and won Hawgsmoke 2022. Congrats, Skullbangers!

The post Bbrrrtttiful Images Of A Flightline Packed With A-10s For Hawgsmoke 2022 appeared first on The Drive.