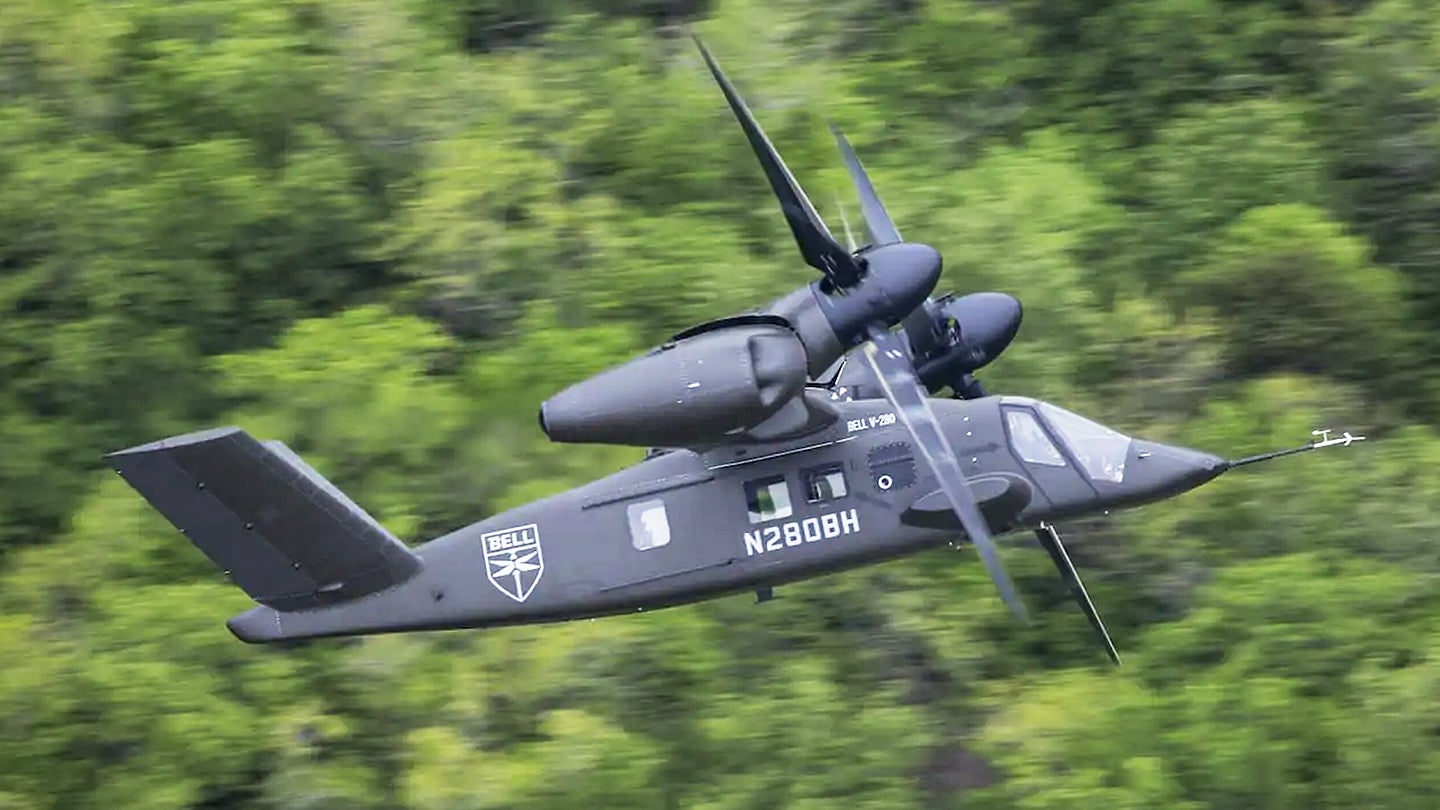 Dubbed the Future Long-Range Assault Aircraft, or FLRAA, Valor is set to enter service in the mid-2030s and eventually will supplant the Sikorsky-built helicopter that has served as the Army’s workhorse utility rotorcraft for more than four decades.

The initial contract award is $232 million and includes no actual aircraft, only the final digital design for the Valor that Bell has generated as a result of the aircraft’s five-year-long flight testing period and development campaign, as well as Army requirements. The total award, with options for physical aircraft, runs to $1.2 billion and then to $7 billion to begin building out the fleet, according to  Maj. Gen. Robert Barrie, the Army’s program executive officer for aviation.

While somewhat stingy on specifics of why the Army chose Bell’s tiltrotor over Sikorsky’s pusher-compound-rotor design derived from the company’s ‘X2’ technology, Barrie said the decision boiled down to a “best value proposition.”

“Can we be more specific on the factors of how exactly we arrived at this point? No.,” Barrie said. “However, best value is meant in the truest sense that it was a comprehensive analysis of a variety of factors. No one really drove that decision. So, if you look at broadly at a very high level, the factors are variables and performance, cost, and schedule, all were considered, and the combination of those are defined explicitly and evaluated and what’s arrived that is what I would describe as the best value what the Army would describe as its best value selection.”

The award is a huge win for Bell. The company recently completed planned deliveries of the latest versions of the venerable H-1 family of rotorcraft to the Marine Corps, built the OH-58D Kiowa Warrior that the Army retired years ago, and, with Boeing, developed variants of the V-22 Osprey for the Marines, Air Force, and Navy. However, it currently has no other major production contracts on the horizon with the U.S. military. The company has invested millions into manufacturing and digital design capabilities in various facilities in and around Fort Worth and Amarillo, Texas.

“This is an exciting time for the U.S. Army, Bell, and Team Valor as we modernize the Army’s aviation capabilities for decades to come,” said Mitch Snyder, president and CEO of Bell. “Bell has a long history supporting Army Aviation and we are ready to equip Soldiers with the speed and range they need to compete and win using the most mature, reliable, and affordable high-performance long-range assault weapon system in the world.”

Both teams delivered their specific pitch for FLRAA in September of last year. The Sikorsky-Boeing Defiant X is a refined version of the SB>1 Defiant developed for the Army’s Joint Multirole Technology Demonstration (JMR-TD) program, in which the Valor was its prime competitor.

Valor posted hundreds of flight hours in its flight test campaign and notched more than the 280 knots speed it was named for and designed to achieve. Conventional helicopters cannot get anywhere near that speed. In fact, the V-280, which is a demonstrator not a finalized design for the Army, broke the 300-knot barrier in testing.

Valor’s first flight occurred on Dec. 18, 2017, and has since logged more than 200 hours in the air and met a number of ambitious speed and agility goals set by the Army under the Joint Multi-Role Technology Demonstration (JMR-TD) program

Bell flew Valor for three and a half years before grounding the operational prototype in 2021. Sikorsky and Boeing continued to fly Defiant, which was still performing data-gathering sorties as recently as October but lagged behind the V-280 in flight hours because of developmental growing pains associated with its rigid composite main rotor blades and transmission system. The SB>1 first flew in 2019.

V-280 improved upon the Bell-Boeing V-22 with its tilting nacelles — rather than the V-22’s tilting engines. In many ways, this win gives Bell a chance to improve upon its tiltrotor technology, with the V-280 specifically designed to leverage lessons learned by developing and fielding the Osprey and the hundreds of thousands of hours flown by the type in some of the world’s harshest conditions. Maintainability and affordability are very much design drivers for Valor.

The story does not necessarily end with the Army’s decision. Lockheed Martin, which owns Sikorsky could very well protest the decision, which will put the entire program on hold at least for 100 days while the Government Accountability Office weighs its counterargument.

The Defiant team released a statement following the Army’s announcement.

“We remain confident DEFIANT X is the transformational aircraft the U.S. Army requires to accomplish its complex missions today and well into the future. We will evaluate our next steps after reviewing feedback from the Army,” the companies said.

Barrie and Douglas Bush, Assistant Secretary of the Army for Acquisition, Logistics, and Technology, said the Army has anticipated a potential protest of the award and built time into its schedule to accommodate any associated delay.