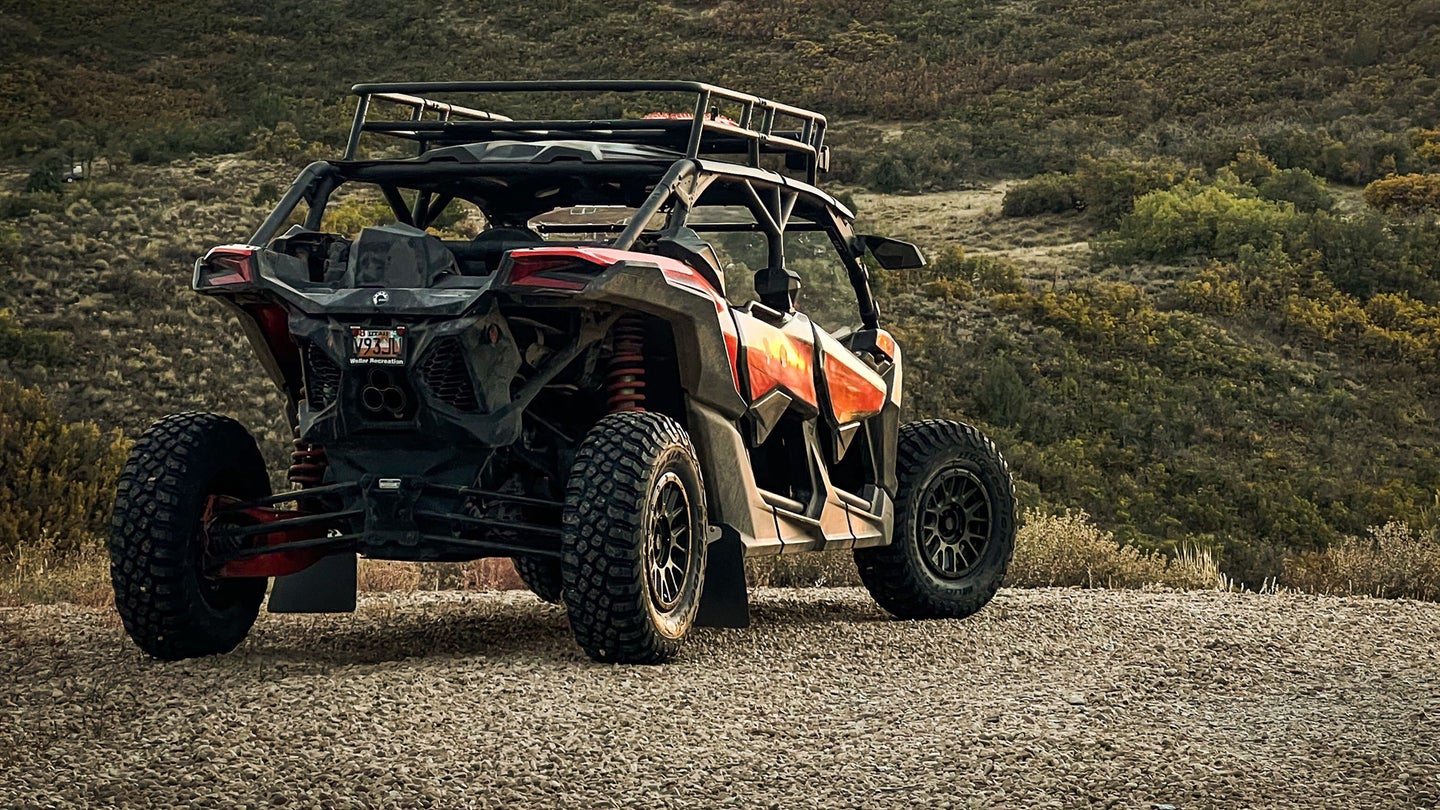 One of my biggest issues with our Can-Am’s factory spec were its tires. The Maxxis Bighorn 2.0 tires are great for sloppy terrains like heavy snow, sand, or mud. But for the hard-pack gravel, dirt, and pavement here in Northern Utah, well, they’re trash.

Not only did the drone on both pavement and gravel, but they wore quite quickly. After just 1,000 miles, they’d been smoothed down so much as I might’ve as well been competing against Daigo Saito. I also felt they didn’t truly compliment the Can-Am’s performance capabilities. There was more left on the table.

That hasn’t been the case with BFGoodrich’s Mud Terrain T/A KM3 UTV tires, nor do I anticipate any going forward. Let me tell you about one of the best upgrades I’ve made so far.

BFGoodrich launched the T/A KM3 in 2018 using the company’s race-winning construction methods. Unlike other race-spec tires, BFG wanted to offer it to you, me, and everyone else so we could pretend we’re Robbie Gordon blasting through Ensenda in the inky blackness of night.

The company threw everything it had learned from off-road racing at this tire, including; a Terrain-Attack tread pattern for better off-road grip, Krawl-Tek rubber compound to grab when climbing rocks, a Linear Flex zone that “allows it to envelop objects at reduced inflation for even more grip when climbing”, as well as “extreme sidewall protection, pinch shock resistance, and chip-and-tear resistance on gravel” in its CoreGard Max tech which helps with high-speed antics. If this were SNL, Stefon would’ve read that list.

Yet, with all that tech and a very different, more road- and high-speed off-road-based tread pattern, they are taller and heavier than the stock Maxxis’. Two inches taller, and about eight pounds per corner heavier, to be exact.

They’re also wider at the front while being narrower in the rear. A square setup that necessitated a rim swap, too. I mentioned in my prior Can-Am project update that I’d gone for a set of Black Rhino UTV 15-inch La Paz rims. I also grabbed a set of Gorilla lugnuts to keep everything set properly.

No, I won’t be apologizing for the mix-matched color schemes.

Once those came in, it cost me $60 to throw the BFGs onto the La Paz rims at a local tire shop, and took 15 minutes to change the wheels. That’s slightly longer than car or truck wheels swaps because I had to jack up each corner individually due to the Can-Am’s 20 inches of suspension travel…

In the end, I now have a taller ride height thanks to the 3-inch lift the tires and rims added.

Since the change, I’ve put about 200 miles onto the tires. That may not sound like a lot compared to my 1,300-mile Vredestein Wintrac Pro review last year, but that’s quite a lot in the UTV scene. And those miles have included pavement, gravel, dirt, and 16 inches of fresh pow. Hand on heart, they’ve transformed the Can-Am in more ways than any other modification, barring the jump seat for my son.

Again, the original tires were incredibly loud whenever we hit pavement or hard-pack dirt. Both are required to get to most of the amazing off-road trails around here. The BFGs are nearly silent, shaming even the Vredestein’s NVH. There’s no drone, no high-speed whine, and no clunky off-road tire noise to speak of. And they handle.

The road to our favorite trails puts every California canyon road to shame. Climbing 3,000 feet in the span of a few miles, it bleeds into rolling aspen groves lining the street, making it feel like Rally 100 Acre Wood. Suck it, SoCal.

With the taller ride height, I was afraid the Can-Am would feel more rolly. It’s something side-by-sides are known for and if you don’t believe me, please consult literally any social media. It doesn’t, it actually feels more predictable thanks to the more road-going tread pattern. Whereas the Maxxis would feel a little wobbly thanks to its tire blocks, the BFGs feel linear in their grip. You know exactly when they’ll break free.

Their off-road prowess, however, is just as good.

These tires have hysterically good traction in gravel and hard-pack dirt. Right out of our driveway, our gravel road is on a 25-degree incline. Most tires slip a fair amount, which is incredibly fun when you’re riding something like a Zero FX. Even in 2WD, which is how I keep the Can-Am most of the time, the BFGs just hook. The gravel trails in the forest are no different. There’s no resistance to our forward momentum high in the mountains.

Another concern I had was that the extra weight would make the Maverick X3 feel slower. If you haven’t guessed, I quite enjoy pretending I’m Colin McRae or Ott Tänak. Slow is not what I want. But if anything, it feels faster, especially in 4WD as it just digs. On one particular flowy section I love, let’s just say I maniacally giggled living my Baja and WRC daydreams.

Unsurprisingly, they handled low-speed rock crawling with ease, gripping one particular trail’s polished rocks like a mountain goat. As for their snow performance, they ate our first big snow for breakfast.

We’ve been stuck in snow previously with the Can-Am, and though I’d rather not do that again, sledding in the backcountry is fun for the kids. So we headed back there anyways after a snowfall that brought 16 inches of the stuff overnight. It had even trapped a Subaru WRX pretending it was a rally car on our way into the forest. We, however, blitzed through the trails and spent a couple hours deep in the woods sledding without a soul around.

Nothing stopped the Can-Am. Not even when I stopped to take a picture with the snow up to the frame. I might have to attach a tow rope to the back at some point…

BFGoodrich’s Mud Terrain T/A KM3 UTV tires represent an amazing upgrade. That shouldn’t have been too surprising as tires are one of the best and easiest upgrades you can do to any project car. They’re often transformational modifications and these are no different. I just wasn’t ready for how good they’d be.

They’re not the most inexpensive set of tires, though, but they’re in line with other performance off-road tires costing between $215 to $347 depending on your size. That’s not terrible, but Amazon, Discount Tire, and Tire Rack have discounts all the time to help make the price more palatable. Just be on the lookout.

I’ve loved each and every mile with these BFGs so far and can’t wait to put even more miles on them throughout the winter and into next spring. We’re going to go much further then and go even deeper into the woods, so stay tuned and get ready for some rally/off-road camping content in the near future.

And don’t be that Subaru, get good tires.