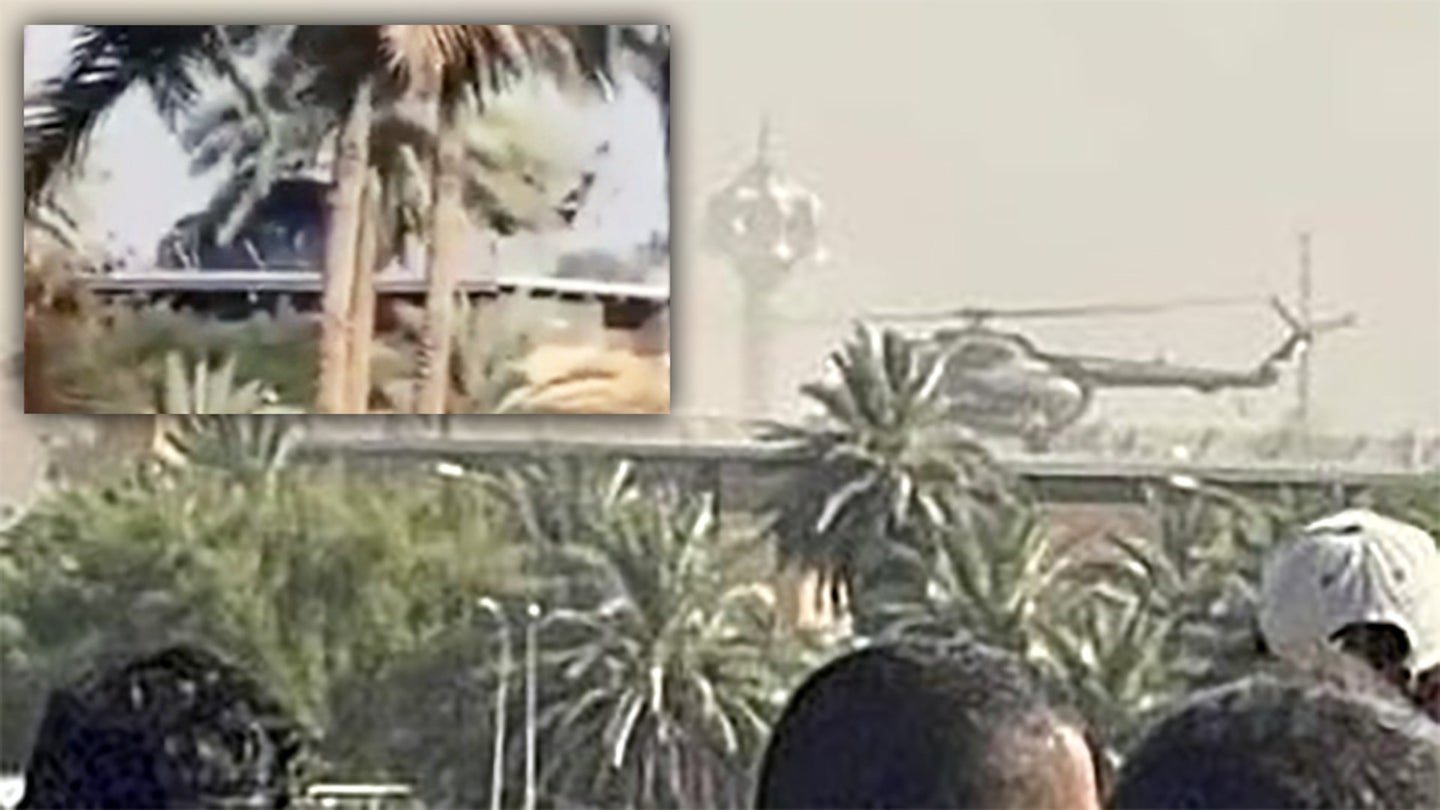 A picture and a still from a video reportedly showing an Mi-8/Mi-17 helicopter on the roof of a building in the Green Zone in Iraq's capital Baghdad, which triggered false claims that America's Embassy there was being evacuated. via Twitter

The U.S. State Department has categorically denied claims that it ordered personnel to evacuate from the U.S. Embassy in Baghdad after a serious wave of violence erupted in the Iraqi capital today. Rumors of an evacuation order had begun to swirl after a video clip and a still picture showing a Mi-8/Mi-17 Hip-type helicopter on top of a building, which appears to be inside Baghdad’s sprawling Green Zone, began circulating on social media, drawing comparisons to images from the fall of Kabul last year. Together with the official denial of evacuation, there are strong indications that this was an Iraqi helicopter and it may not have actually been at the U.S. Embassy compound at all.

“These reports are false,” a State Department spokesperson told The War Zone in a statement in response to queries about the evacuation claims. “Ensuring the safety of U.S. government personnel, U.S. citizens, and the security of our facilities remains our highest priority.”

U.S. Central Command (CENTCOM) “continues to monitor the situation closely which currently looks like it’s de-escalating,” U.S. Army Lt. Col. Dave Eastburn, a spokesperson for the command, which is the top American military headquarters overseeing operations in the Middle East, also said in a statement to The War Zone. “As of now, US CENTCOM is not aware of any evacuation orders being issued.”

Hundreds of supporters of Muqtada Al Sadr, an Iraqi parliamentarian and firebrand Shi’ite cleric, stormed the Green Zone today and burst into the Presidential Palace there. This in turn triggered a forceful response from Iraqi security forces that has reportedly left 12 individuals dead and more injured. All of this came after Sadr announced plans to resign from politics over an ongoing dispute stemming from parliamentary elections last October in which his party failed to secure a clear majority. Sadr has since refused to negotiate with rival Shi’ite political parties, many of which have strong ties to Iran, and has otherwise been unable to form a government, leading to political deadlock and communal tensions.

The U.S. Embassy in Iraq, as well as other diplomatic facilities in Iraq, such as the consulate in Erbil, which is the capital of Iraq’s northern semi-autonomous Kurdish region, have certainly come under attack before. Sadr, who still leads a sizable militia, fought for many years directly against the U.S. military in the country. However, the cleric’s supporters do not appear to have targeted the American Embassy compound in Baghdad as part of this latest outburst of violence. There are unconfirmed reports that a gas cylinder at a facility within the British Embassy compound did explode in the course of the violence, but whether that was the result of a deliberate attack is unclear.

In addition to the claims that the U.S. embassy was being evacuated, there were reports that the Iraqi government ordered the evacuation of its offices in the Green Zone and that the United Nations mission in the country had done so, as well.

While the video and picture of the Hip helicopter does appear to have been taken inside the Green Zone, where exactly they were shot and what the helicopter was actually doing remains unclear. There’s no indication one way or another as to who is the operator of the helicopter, either.

The U.S. State Department’s own Air Wing does maintain a significant presence in Iraq, both helicopters and fixed-wing aircraft, but there is no indication that Mi-8/Mi-17s are among those fleets. Of course, the Central Intelligence Agency and secretive elements of the U.S. military are known to fly examples of these Russian-made helicopters. Hips supporting the CIA mission in Afghanistan notably took part in evacuation operations in that country’s capital Kabul last year.

However, there is a distinct possibility that the helicopter in question was not U.S. owned or otherwise being operated in support of the U.S. government, or even necessarily at the U.S. Embassy at all. The large and heavily fortified U.S. Embassy compound in the Green Zone is adjacent to various Iraqi government buildings, including a facility identified on Google Maps as a headquarters for Iraq’s elite Counter Terrorism Service (CTS).

Previously known as the Iraqi Counter Terrorism Force (ICTF), CTS is a national-level special operations force that answers directly to the country’s Prime Minister. The Iraqi Air Force provides dedicated aviation support to CTS in the form of a fleet of distinct overall black-painted helicopters, including Mi-8/Mi-17 types, with prominent Iraq flags painted on their tails.

The Mi-8/Mi-17 in the imagery circulating online from today’s violence in Baghdad is certainly an overall dark color and what looks like it might be an Iraq flag is visible on the tail in the video. CTS personnel were reportedly among those called in help respond to the situation in the Green Zone.

Though the State Department has not issued an evacuation order to personnel at the Embassy in Baghdad, the situation there remains tense, with continuing reports of continuing violence as night has fallen. U.S. Ambassador to Iraq Alina Romanowski has issued a statement calling for a peaceful resolution of the situation.

Addition Iraqi security forces have taken up positions in the capital. Protests had erupted elsewhere in the country and the Iraqi military has declared that a nationwide curfew is in effect. Iraq’s current caretaker Prime Minister Mustafa Al Kadhimi has reportedly issued a prohibition on the use of live ammunition against protesters.

The underlying disputes between Sadr and his political opponents, along with serious allegations of Iranian interference in the proceedings, remain unresolved. Sadr just recently implied that Iran’s Supreme Leader, Ayatollah Ali Khamenei, had forced the Iraqi Shi’ite spiritual leader Ayatollah Kadhim Al Haeri to retire. Al Haeri announced he would be stepping down from his role yesterday and told his adherents to look to Khamanei as their new spiritual authority rather than a new Iraqi Ayatollah. Sadr’s supporters reportedly tore down or otherwise defaced billboards with the likeness of the late Qassem Soleimani, who had been a top general in Iran’s Islamic Revolutionary Guard Corps (IRGC) before he was killed in a U.S. drone strike during a visit to Baghdad in 2020.

All of this also comes amid a new spike in U.S.-Iran tensions, with Iraq, along with Syria, as a focal point. On Aug. 24, the U.S. military carried out airstrikes on a number of facilities belonging to Iranian-supported forces in Syria, which then prompted skirmishing between those groups and U.S. forces in eastern Syria.

The initial U.S. strikes had been in response to drone attacks on the U.S.-supported At Tanf garrison in Syria, which American officials had blamed on Iranian-backed groups. Combined Joint Task Force-Operation Inherent Resolve, the official name of the U.S.-led task force primarily focused on fighting ISIS in Iraq and Syria, had Tweeted out and then deleted a map showing that at least one of those drone attacks on At Tanf had been launched from an area in eastern Iraq that is a hub for Iranian-supported militias, particularly Kata’ib Hezbollah.

All told, while today’s violence did not prompt the evacuation of the U.S. Embassy in Baghdad, the situation in the Iraqi capital, as well as elsewhere in the country, remains highly volatile.