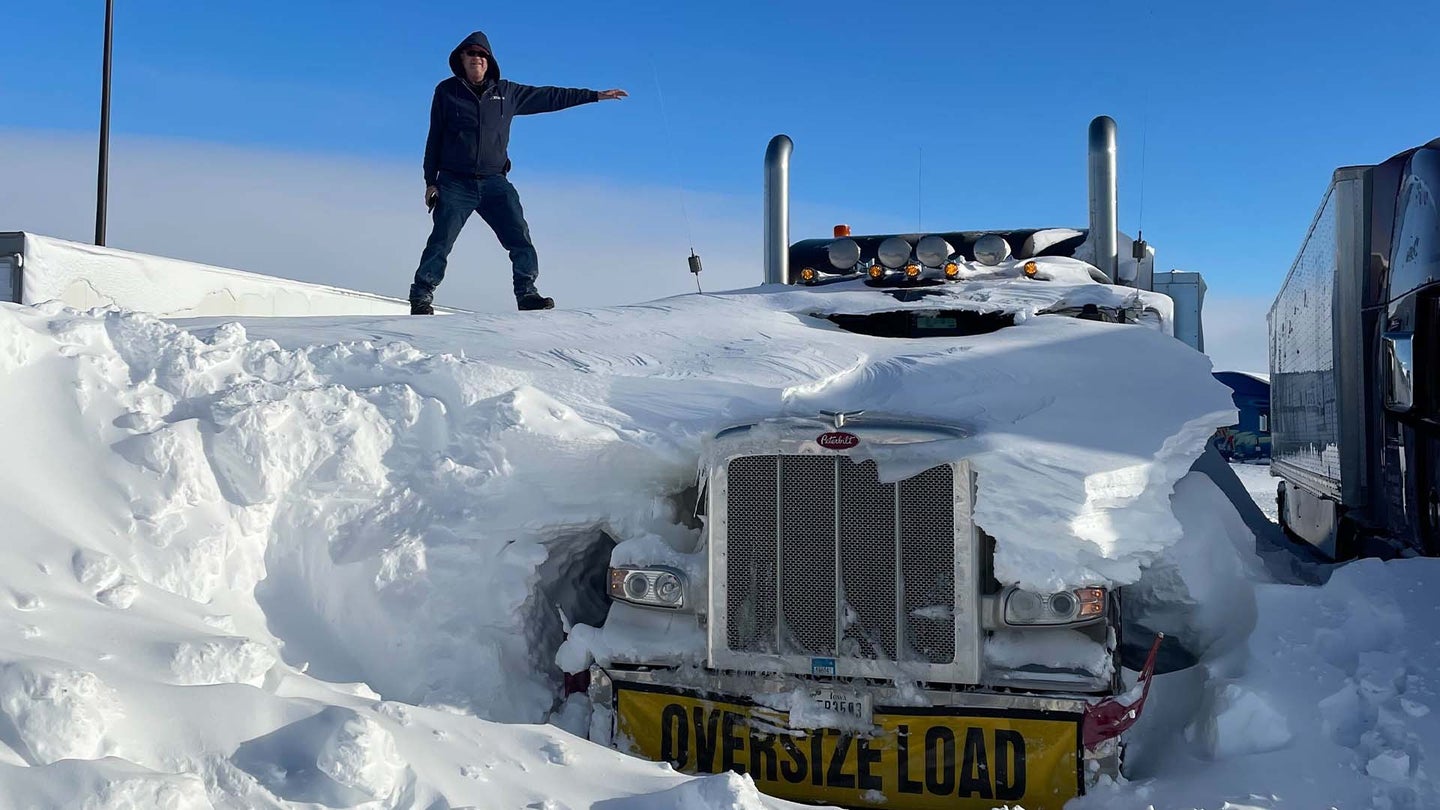 A fuel stop in Vivian, South Dakota, hosted dozens of truckers for days on end as snow drifts shut down the area completely. A handful of viral Facebook posts show the conditions drivers faced as they were forced to park their rigs for nearly a week. After a good deal of shoveling and scooping with a Bobcat, most were able to exit on Sunday as nearby roads opened up, but only after spending many a night buried in snow up to their cab lights.

Conrad Quail tells me he was hauling an oversized load when he pulled into the Coffee Cup Fuel Stop around 10:30 a.m. local time Tuesday. They had blocked off Interstate 90, which led him and dozens more drivers to the gas station just off State Highway 83. He was finally able to leave around noon on Sunday, and he confirmed there were roughly 70-80 semis there with him.

“I had a buddy of mine that was going through [the town of] Belle Fourche and he brought me a shovel on Friday or Saturday,” Quail says. “Another buddy with a load like mine, who didn’t get snowed in as bad, he tried to pull me out and we broke two chains trying to get me to move.”

Quail explains that prior to his truck being recovered completely, a local with a piece of heavy equipment was able to clear its front end so the radiator could breathe. Photos show snow piled near the top of the Peterbilt’s sleeper; combined with the weight of the load, this made it especially tough to yank out.

“Friday night, about midnight, I wake up and a bunch of farm kids with a giant 4WD tractor with a big blade on it are there with a big blue tow rope—about four inches around—and they were charging $200 to pull you out,” Quail tells me. “I bet they made $2,000-$2,500 that night.”

All Pro Towing out of Murdo, South Dakota, was finally able to get Quail and several others unstuck with a mighty wrecker. They had apparently seen the videos that he uploaded to Facebook the day before, which have racked up more than 1.3 million views at the time of publishing. Another viral post shows a pair of semis buried in one great mound with claims of 50-mile-per-hour winds and 10-foot snow drifts beside the highway.

Quail added, “Once I got pulled out, it took about an hour to scoop the snow off the load.”

Quail was supposed to deliver an Evapco refrigeration unit to Marysville, Washington, on Friday. That delivery is still in the works as of mid-day Monday, though clearer weather is allowing him to make good progress. One thing is clear: He’s glad to get out of South Dakota.

The post Blizzard Traps 70+ Semi Trucks Under Huge Drifts for Days in South Dakota appeared first on The Drive.