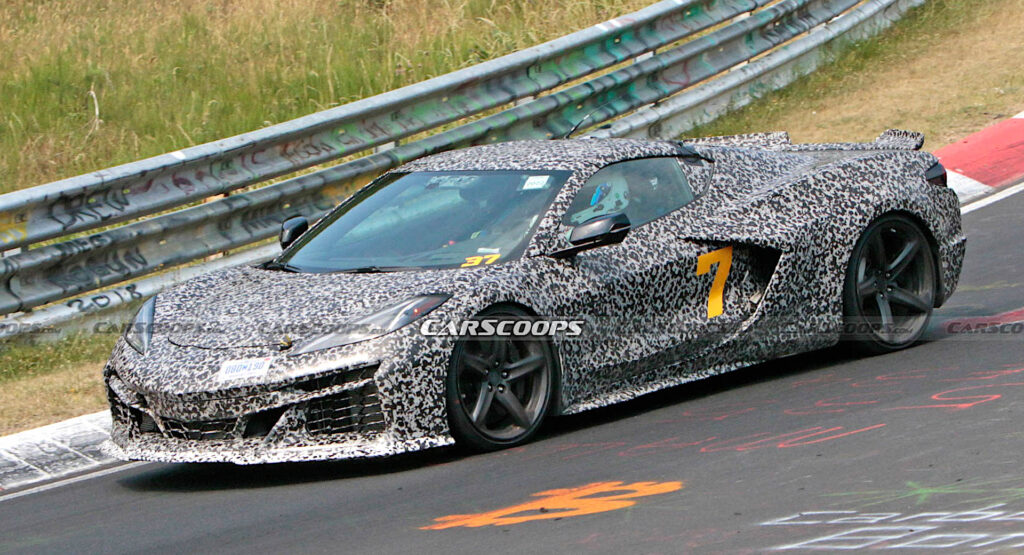 Earlier this week we reported on a trio of Corvettes caught testing on German public roads close to the Nürburgring by spy photographers who were convinced they were C8 E-Ray hybrid prototypes.

But that theory was undermined by the absence of yellow stickers in the corner of the windows, a safety marker mandated in Germany on test cars to let emergency crews know they’re dealing with an electrified powertrain should the vehicle be involved in an accident or catch fire.

Today we can consign those doubts to the trash though, because two of those Corvettes have now been snapped on the old Nürburgring circuit itself, and this time they had those all-important yellow stickers in the top left corners of the rear screens. Unlike the third car from the earlier set of images, neither of these cars had an electrical socket cap on the driver’s side front fender, but maybe the socket is hidden in the trunk to throw us off the scent or because these are earlier development cars. The E-Ray might not even be a PHEV at all, just a straight hybrid, but that seems unlikely given that Porsche, Ferrari, and Lamborghini all have, or are working on plug-in hybrid sports cars.

Chevy makes no secret of the fact that a hybrid Corvette is coming and released a video earlier this year confirming that fact, while simultaneously revealing that it would be all-wheel drive. That would make the E-Ray, as it’s believed to be called, the first production Corvette to send any power through the front wheels, as well as the first hybrid.

But potentially the first of two, because a Hagerty story based on an alleged leaked document from GM claimed that Chevy was making a pair of electrified Corvettes with wildly different power outputs, which would be followed by an all-electric C8. Hagerty’s intel suggested a Corvette Grand Sport would combine a 6.2-liter V8 with an electric motor making 600 hp (447 kW/608 PS) and 500 lb-ft (678 Nm) of torque, while the flagship Zora would get an assisted version of the Z06’s 5.5-liter V8 and churn out 1,000 hp (746 kW/1,014 PS) and 975 lb-ft (1,322 Nm) of torque. Chevy has confirmed that one of those hybrids is coming this year, and our money is on the Grand Sport being first in the line.