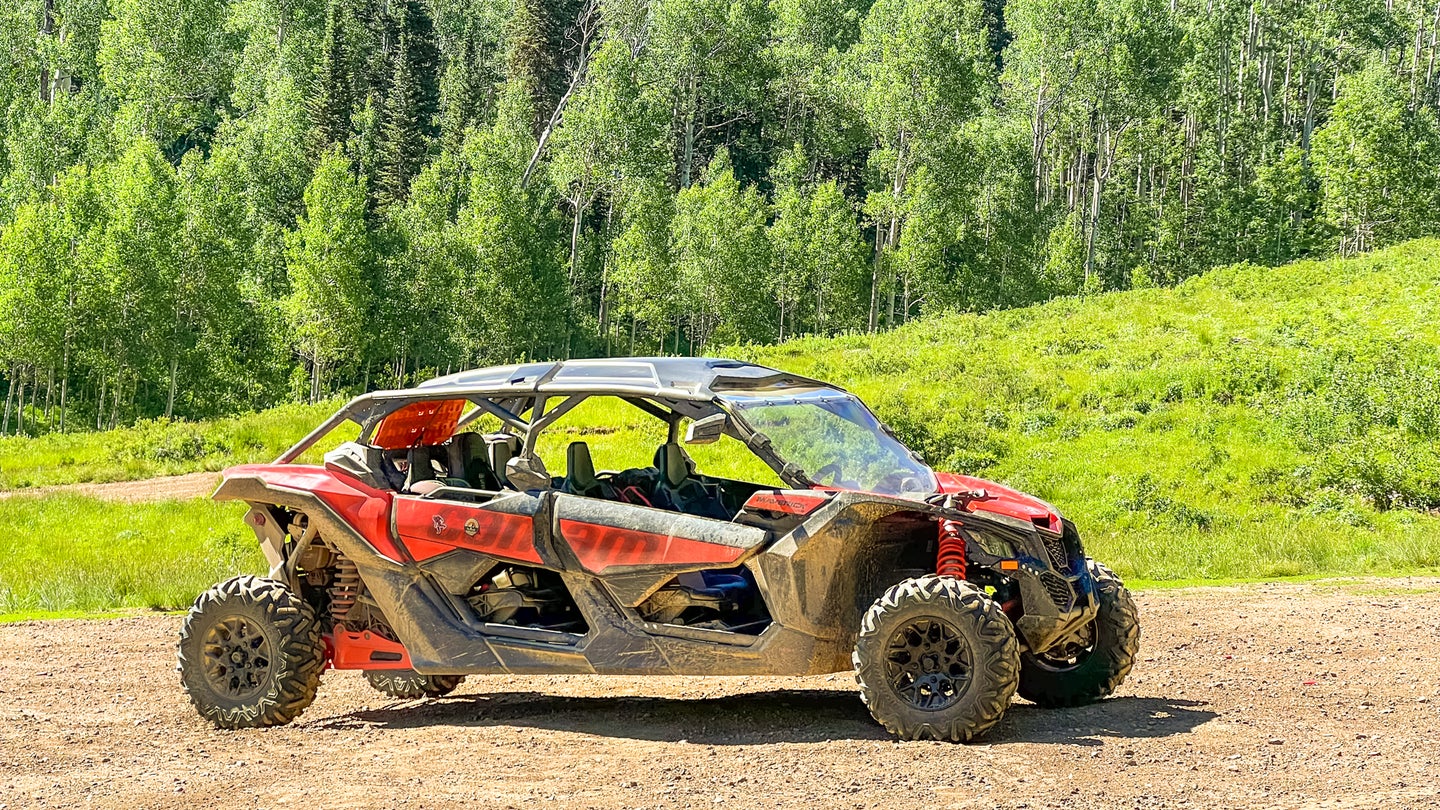 I come from a long line of people who live by the motto: “I don’t need that. I’ll be fine.” I’m here to tell you today that this motto, this creed, this willful need to live without the niceties of life is just plain stupid. And there’s no better illustration of such idiocy than when I finally installed Can-Am’s Sport Roof to our 2021 Maverick X3 Max DS Turbo R. Why did I make us wait so long?

Our base Maverick X3 Max didn’t come with a roof from the factory. We could’ve optioned it, but to keep the price down and have our build allocation come quicker, we didn’t check the box on the order sheet. For the last year or so, we rallied our way through Utah’s trails sans roof.

For a year, we sat open to rain, sun, and snow. Indeed, we got rained and snowed on and even got sunburns a few times. I didn’t think it was that bad. It sucked every so often, but it wasn’t torture. And my kids loved using the Maverick X3 Max’s open cage as a jungle gym whenever it was parked. I just kept repeating my masochistic mantra. “It’s fine. I can live without it.”

But then Can-Am offered to send me a Sport Roof, the option we didn’t check when we ordered it. I figured we’d see if it’s better. And now I can tell you folks that I’m an idiot of biblical proportions.

The Sport Roof comes on a pallet in two pieces. It also comes with all the hardware you’ll need. It doesn’t, however, come with instructions. That’s sort-of understandable as this is often a dealer-installed option. Took me about 12 seconds to find the instructions online, though. There’s even a short video, but that was less helpful because it’s for the two-door Maverick X3 and not the four-door Max model.

Installation was fairly painless once I figured out which hole to begin with. The instructions aren’t clear that you start from the most forward rear set of holes. Because of that, you can easily lose a half-hour bolting it into the wrong place. Ask me how I know. Once you get it laid out correctly, bolting it all together goes by quickly, especially if you have a drill or impact driver.

The Sport Roof’s front section can also be quickly removed thanks to seven twist locks, giving you a targa appearance. This also reaffirms my belief that the Maverick X3 is a secret Porsche, i.e., rear-engine, rear- or all-wheel drive, lightweight, pull-strap handles, thousands of optional extras, and a targa roof.

Because the Sport Roof is directly from Can-Am, it’s a perfect fit. That’s something you’re not guaranteed when buying something from the aftermarket. Our friends up the street have a 2021 Polaris RZR they’ve fully kitted out, including an aftermarket aluminum roof, which is apparently lighter, stronger, and better than those that come from Polaris. But the thing rattles against the RZR’s cage so much so that they stuff it with shirts or socks to reduce the noise. We haven’t heard a peep out of the Sport Roof, and that’s just the start of how much of a change the roof’s made to our Can-Am ownership.

The difference between driving experiences was immediately apparent as the entire cabin was 10 to 15 degrees cooler than before. I could see without squinting or needing a hat, and the amount of dust entering the cabin reduced, making it far more livable. Who knew a roof could be so nice?

After the roof installation, we went on a few shorter outings. But during the Fourth of July weekend, we put more than 200 miles on the Maverick X3 Max, all of which was off-road. This is the most we’ve done in a single weekend, but it didn’t feel like we were pushing ourselves. It just felt natural to keep exploring. We went through muddy trails, alongside lakes, streams, and rivers, on high-speed gravel, and we even did some rock crawling.

Making the roof even more essential was the temperature, which hovered around 90 degrees throughout the weekend. And because we’re at elevation, there’s less atmosphere to protect you from the sun’s UV rays. Without the overhead cover, we would’ve cooked like eggs on pavement in Phoenix. This would’ve cut our fun short. It has in the past. But with the roof, we just kept going and spent nearly the entire weekend outside having fun.

The one issue I have is about the directions. They could be clearer and show better diagrams or use tech-produced photos to show you exactly what you need to do. That’d make the whole experience far easier for those who opt to get the roof later and also like the DIY aspect of getting it sent to your house.

As for the price, it’s $795. That’s comparable to many of the aftermarket manufactured roofs available. And for what you’re getting—comfort and extended exploration—it’s worth the price of admission. It’s not cheap, but it absolutely adds value.

I just wish I’d realized that sooner and not been such a blockhead.