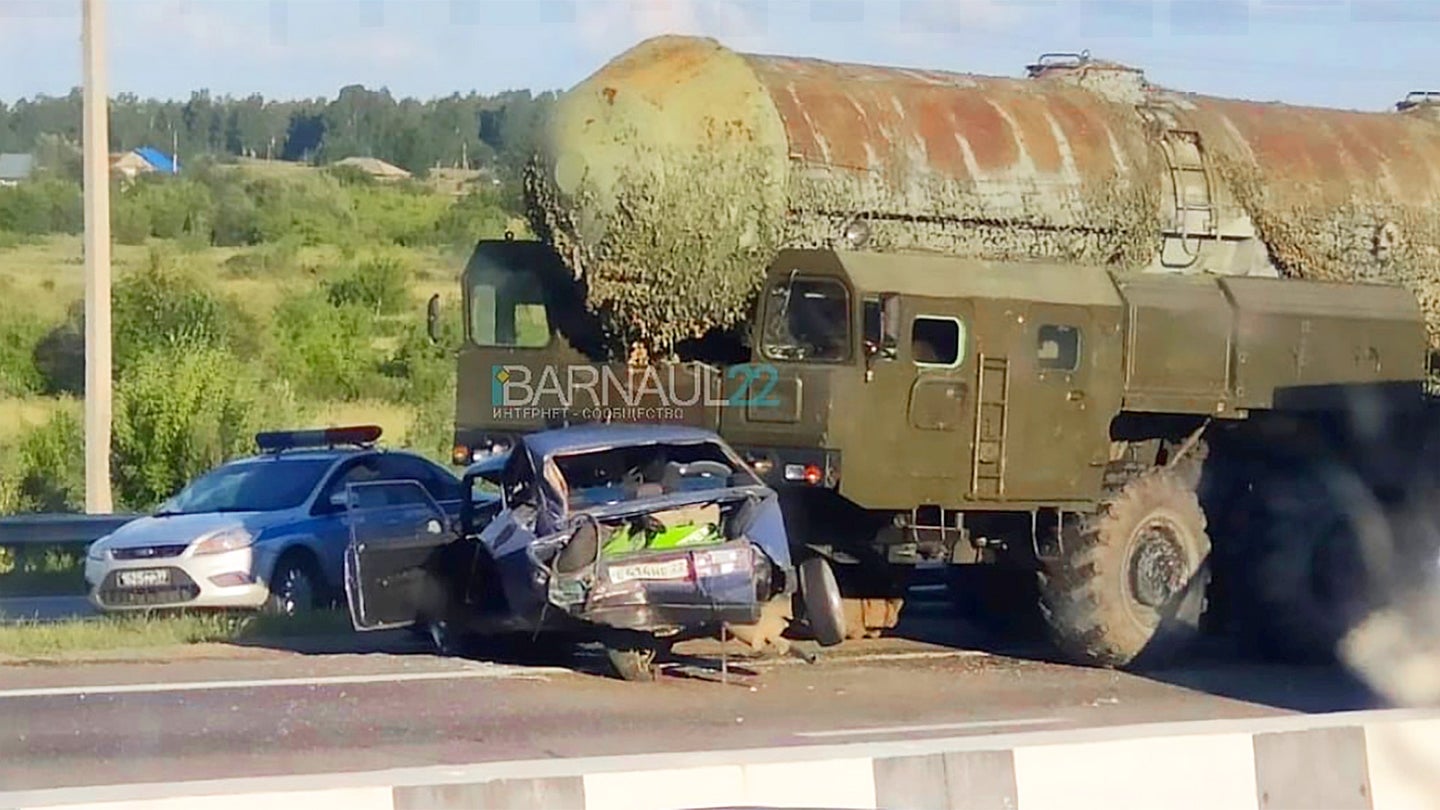 An image has emerged on social media that supposedly shows the aftermath of a bad car crash involving a massive Russian intercontinental ballistic missile transporter-erector-launcher-like vehicle and a passenger car.

The exact circumstances of the accident are unclear, but the damage inflicted upon the small, sedan-style car is extensive. In the photo, we see the car’s entire chassis bent out of shape, while its rear axil protrudes unnaturally to the right due to the force of the collision.

While the huge military vehicle closely resembles a MAZ-7917 transporter-erector-launcher (TEL) carrying a Topol intercontinental ballistic missile (ICBM) at first glance, it is actually an ICBM driver training vehicle. These rare vehicles carry missile-size tanks that can be filled with water or sand via large hatches on top to simulate the breaking speeds of a fully-laden mobile ICBM launcher.

Back to the original picture, both the car and the driver training vehicle sit on the side of the road, while some form of police or ambulance vehicle can be seen in the background. Judging from the photo, it appears as if the training vehicle collided with the car head-on or near head-on. If true, the car would have stood little chance against the massive military vehicle.

Details about the exact weights, dimensions, and other specifications of the Topol driver training vehicle do not appear to be readily available, but at least one source says the underlying MAZ-7917 chassis by itself has a curb weight of 35.8 tons (32.5 metric tons) and is around 61.3 feet long (18.71 meters). It doesn’t sound like a very maneuverable vehicle, either, with a turning radius of some 88.5 feet (27 meters).

There are only a small handful of places you can run into a mobile ICBM launcher — or trainer — figuratively or literally. The bizarre spectacle of seeing a vehicle that totes around and deploys some of the most destructive weapons on earth on public roads is alien to the west, but in Russia -and to some extent in China and to a lesser degree North Korea – it isn’t.

In 2019, for example, an image emerged of an RS-24 Yars TEL stuck in a traffic jam at Moscow Automobile Ring Road. Those loaded with live missiles and warheads do travel under tighter security and are often dispersed around specific rural areas on semi-improved roads.

That being said, examples of Russian military personnel have also been involved in several fender benders, and more serious collisions, with civilian vehicles in the past, too. As The War Zone noted back in 2019, four motorists were involved in a particularly frightening collision with two 15-ton BTR-80 armored personnel carriers. Videos of the incident can be seen below.

One can only imagine how hard driving something like an ICBM TEL on a highway would be. They are some of the largest wheeled vehicles on earth, with very limited visibility and massive proportions. At the same time, some of those traits make them very hard to miss, as well.

What happened in this instance is a mystery at this time — the car could have been hit in some way before slamming into the training vehicle — but we can only hope everyone walked away ok.