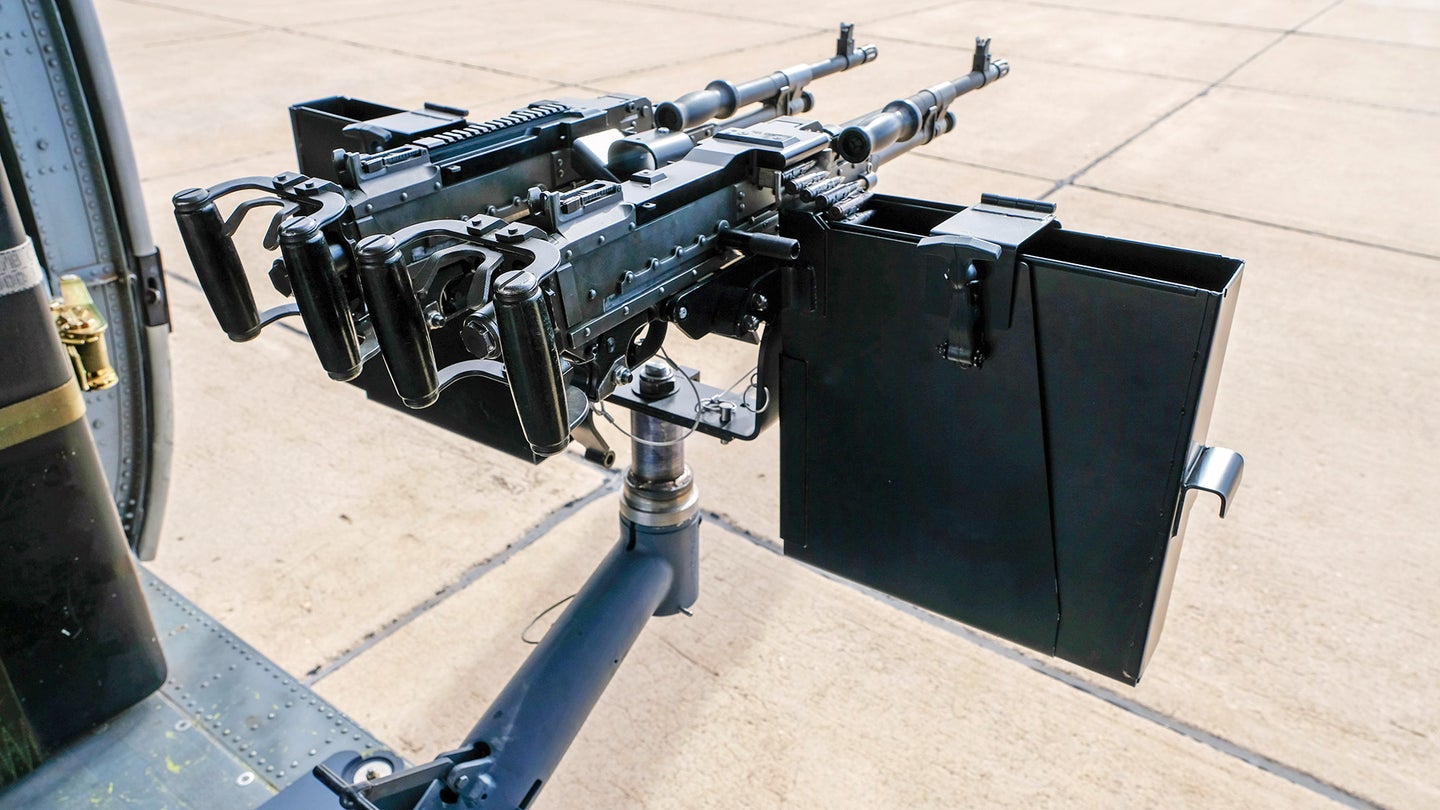 While exploring new ways to provide combat search and rescue teams with more firepower, the U.S. Air Force developed a doorway gun mount to arm its HH-60G Pave Hawk helicopters with four additional M240 machine guns. Built using repurposed armament parts, the solution would supplement the HH-60’s dedicated gunner aperture and offer a cheap way to increase the amount of lead that combat search and rescue helicopters could pump out by using equipment that is already in the inventory.

According to the Air Force, the concept was designed by the 943rd Rescue Group out of Davis-Monthan Air Force Base, Arizona as a way to better arm the 920th Rescue Wing’s Personnel Recovery Task Force (PRTF). With the guidance of Air Force Chief of Staff Gen. Charles Q. Brown’s Accelerate Change or Lose philosophy, which essentially seeks to ensure that the service rapidly evolves, airmen from the 943rd were able to engineer the new mount with readily available resources while utilizing minimal manpower and as many existing Air Force manuals and technical orders as possible.

With the HH-60G slated to be retired in Fiscal Year 2023, a key aspect of this mount concept was also making sure that it could be easily transferred to the new and similarly structured HH-60W Jolly Green II, which reached initial operational capability this October. Most HH-60s currently fly with any two of the three primary guns that are compatible with the aircraft, which include the GAU-2C 7.62mm minigun, GAU 18/A .50 caliber machine gun, or M240 machine gun. Since the ultimate goal was to add four additional weapons to the aircraft, airmen were then tasked with examining which of the three guns the HH-60 could be up-armed with.

After testing with the GAU 18/A .50 caliber machine gun, the team realized that the HH-60G’s floor design would not support the torque that would be applied by doubling up on these weapons, thereby eliminating it as an option. The potential GAU-2C 7.62mm minigun pairing was also disqualified because of the amount of power that would be required to operate both weapons, which led to the M240 being chosen for this concept.

“The M240 is multi-capable equipment for our personnel recovery task force that will enable us to perform contested-area combat search and rescue, logistics under attack, and agile combat employment,” said Col. Jes Hamilton, 920th RQW commander. “It will increase our offensive and defensive capabilities, at an extremely low cost, and give us flexibility for air and land use around the world.”

Two 7.62x51mm M240 machine guns were then mounted in both door openings on the HH-60G, arming the rescue helicopter with four of these weapons in total (in addition to two more guns that could be housed in the dedicated gunner stations on pintle mounts). However, in order to remain in line with design constraints while adhering to the Air Force’s Accelerate Change or Lose philosophy, the concept required that the three main elements of the armament’s mount be redesigned using proven parts from military stocks thereby increasing cost-effectiveness.

The components that eventually met these requirements were a base stand from an existing cooperative project within the Air National Guard and Air Force Reserve, and a floor bracket that had been used by the 55th and 71st Special Operations Squadrons for their .50 caliber guns. The third and perhaps most pivotal piece in realizing this concept was an MK99 gun mount, typically used on patrol boats, to mount the two M240 machine guns and hold 1,200 rounds of ammunition. The 355th Maintenance Group at Davis-Monthan AFB also fabricated gun mount stops to accommodate the M240’s new configuration on the HH-60G.

Essentially, an old Air Force base stand and floor bracket paired with a Navy MK99 gun mount that has otherwise been used on various ships and small watercraft have now been brought together as an unlikely but resourceful combination to arm the HH-60 family with four additional M240 machine guns.

“As we perform forward operations at the edge of the battlespace, we will have multi-capable equipment that can be operated by multi-capable airmen,” said Lt. Col. Joe Romeo, 943rd Security Forces Squadron commander. “As [Agile Combat Employment] operations advance, this airborne platform can become a land-based, defensive fighting position to defend an Initial Contingency Location [ICL]/Temporary Contingency Location or ICL-Forward.”

Although, that isn’t to say that there aren’t also potential drawbacks to the design. For example, doorway obstruction immediately comes to mind. When compared to the Navy’s MH-60S/R Sea Hawks, which have swing-arm door gun mount options that are bolted to the floor in a corner, fitting two dual-mounted M240s directly in the center of both HH-60G doorways could present some challenges. This would especially be the case during rescue missions where the aircraft is also used to deploy rescue personnel or even when it needs to recover personnel in a pinch.

The Air Force says the guns can be removed quickly in these scenarios for this reason, but it is certainly an obstruction to deal with nonetheless. For some missions, however, it shouldn’t be a problem, like force protection or when deploying dedicated HH-60s to provide fire support and suppressive fire as makeshift gunships during coordinated operations.

Regardless, the Air Force has demonstrated an economical way to supplement its combat rescue helicopters with added firepower without having to buy and produce an entirely custom set of interfaces and weaponry. Operational testing in coordination with the Air Guard Air Reserve Test Center will need to occur before the system can be used and fired on flying aircraft, but it looks like the Air Force’s combat search and rescue community is well on its way to getting the option to equip their mounts with a lot more firepower.

The post Check Out The New Twin M240 Door Guns For HH-60 Rescue Helicopters appeared first on The Drive.