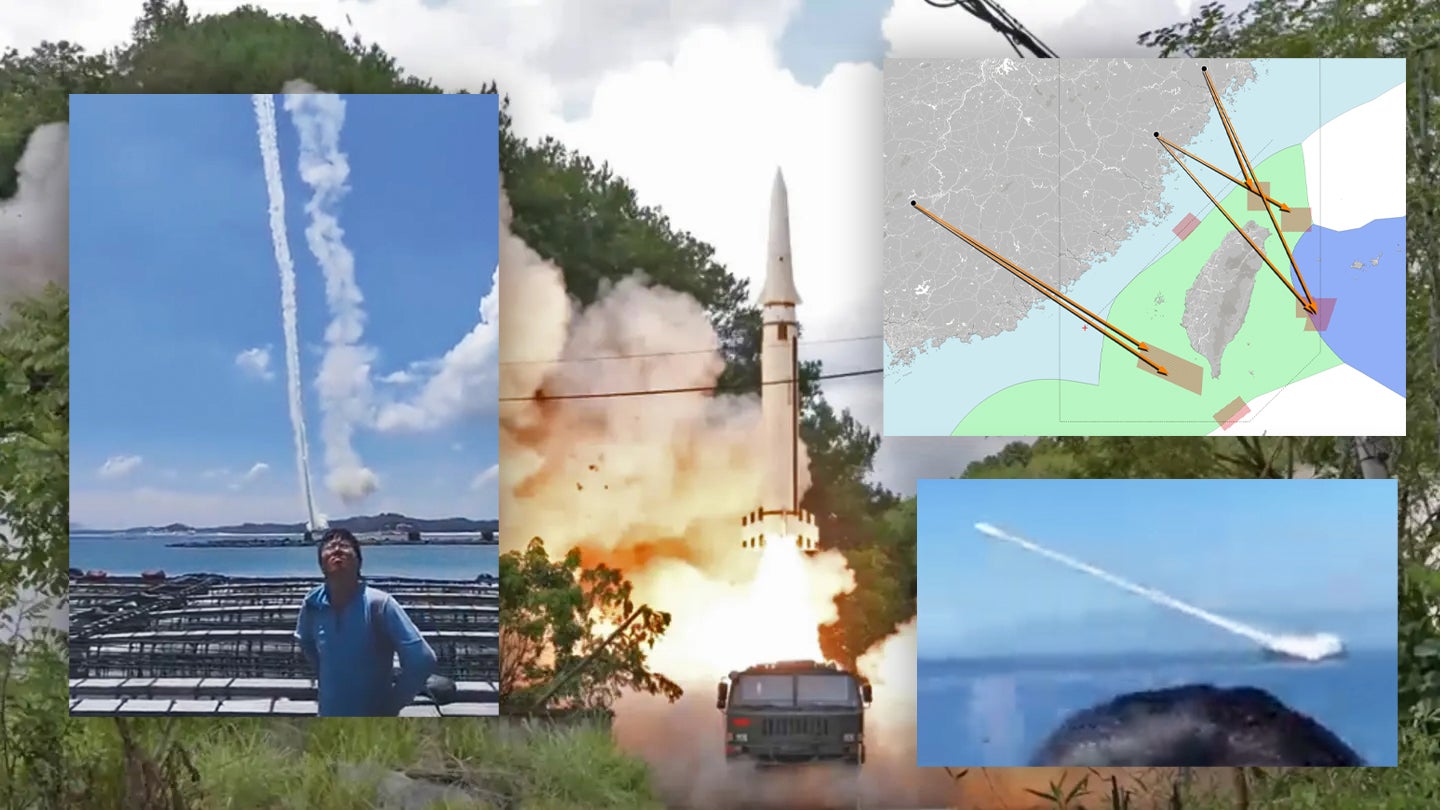 The Chinese military has begun its planned four-day series of live-fire exercises close to the shores of Taiwan, including short-range ballistic missile and long-range artillery rocket launches. Japan says that several of those Chinese missiles came down within its exclusive economic zone (EEZ), raising the possibility of further potential regional fallout, and also at least one of them flew directly over Taiwan, marking another significant escalation. This has been accompanied by numerous Chinese aircraft and boats crossing the median line in the Taiwan Strait, as well as drones penetrating airspace above Taiwan’s outer islands. Taiwan has meanwhile responded by saying it’s now “preparing for war without seeking war.” The maneuvers by the Chinese People’s Liberation Army, or PLA, were put into motion due to a brief visit to Taiwan by the U.S. Speaker of the House Nancy Pelosi, which you can read more about here.

At 1:00 PM local time today, the Eastern Theater Command of the PLA announced it had conducted “long-range live-fire shooting training” in the Taiwan Strait, the 100-mile stretch of water separating the island of Taiwan from the mainland that has regularly been the scene of intense PLA aircraft activity. Today’s exercises included “precision strikes on specific areas in the eastern part,” according to the PLA, which claimed that the “expected results had been achieved.”

The start of the PLA drills today has been heralded with fanfare in the Chinese media, with state broadcaster CCTV describing them as an “important military training exercise and organized live fire.”

Reports of missile and rocket launches quickly followed, with an AFP reporter in Pingtan, on China’s coast, describing seeing several projectiles launched by the PLA into the water. These were fired “from the proximity of nearby military installations flying into the sky followed by plumes of white smoke and loud booming sounds around.”

Video footage from China’s state broadcaster purports to show rockets being fired from China toward Taiwan and there are also now multiple examples of other unverified videos on social media, as well.

These projectiles were almost certainly directed toward one or more of the six PLA exercise zones encircling Taiwan. These had been identified in the advance of the maneuvers together with a warning that ships and aircraft “not enter the relevant sea areas and airspace.” As we discussed previously, some of these six zones are not only within what would be considered Taiwanese territorial waters, but also its internal waters, where independent countries typically enjoy rights that are more in line with those applied on land. Some are also in close proximity to busy commercial ports.

However, Japan’s Ministry of Defense says that five of the ballistic missiles launched by China came down in waters within the Japanese EEZ. The Japanese Minister of Defense, Nobuo Kishi, said his government had issued a diplomatic protest to Beijing.

“This is a grave issue that concerns our country’s national security and people’s safety,” Kishi told a news conference. The incident is reportedly the first time that Chinese missiles have landed inside the Japanese EEZ.

Kishi also stated that China had launched nine ballistic missiles in total, although this is at odds with an account from the Chinese Ministry of Defense earlier today, which said that 11 DF-15 short-range ballistic missiles (SRBMs) were fired into waters to the northeast and southwest of Taiwan. Other assessments indicate that a total of 16 missiles were launched into zones to the northeast, east, and southeast of Taiwan.

As far as is known, and based on the latest U.S. intelligence information, the DF-15 is not intended to carry a nuclear warhead.

More generally, having Chinese missiles overflying Taiwan and other airspace in the region, even for strictly training purposes, increases the potential for miscalculation or even just simple accidents that could lead to a major escalation. With Taiwanese and other air defense networks in the region on a high level of alert, it could only need a missile to stray off course, or malfunction, for a training exercise to look like an attack.

These military factors are also combined with the density of commercial air traffic in the wider area, which further highlights how potentially risky these kinds of live-fire maneuvers could be on a more regional level, too. It is worth recalling that when North Korea fired ballistic missiles over Japan in the past, this was also considered a major provocation and prompted a strong reaction from the international community.

As might be expected for a high-profile PLA ballistic missile exercise, at least one U.S. Air Force RC-135S Cobra Ball intelligence-gathering aircraft was apparently monitoring the maneuvers today, according to online flight-tracking software. Equipped to collect information on the launch of ballistic missile systems, the RC-135S is ideally suited to this kind of mission, and you can read more about its capabilities here.

Unsurprisingly, Taiwan has reacted to the PLA maneuvers with anger and has accused Beijing of effectively mounting a blockade via the exercise zones. Reportedly, while vessels are still able to move to and from the island, they have been advised to use alternate routes.

Just ahead of the start of the drills, Taiwan’s Ministry of National Defense issued a statement that accused the government in Beijing of “irrational behavior” and that the live-fire exercises demonstrated China’s “intention of changing the status quo and disrupting regional peace and stability.”

The Ministry of National Defense went on to state that it “will uphold the principle of preparing for war without seeking war, and with an attitude of not escalating conflict and causing disputes.” In practice, this means the Republic of China Armed Forces will reinforce its alert posture, with troops at all levels continuing to conduct daily training.

“We seek no escalation, but we don’t stand down when it comes to our security and sovereignty,” the Ministry of National Defense added.

Even before the exercises began, it was clear that the PLA was significantly ramping up its activities around Taiwan, including in closer proximity to the island than is normally the case. Yesterday, there were reports of PLA aircraft and warships operating in large numbers in the Taiwan Strait, including over the median line — which serves as a de facto boundary between Taiwan and the mainland.

This response had been predicted by many since Beijing had vowed to take a hard line after news of Pelosi’s upcoming Taiwan visit was leaked. The regime in Beijing views Taiwan as a rogue province that is fully within its sovereign territory.

Last night, there were reports of two PLA drones flying above the Kinmen islands, also known as the Quemoy islands. While these are located only around 6 miles off the coast of China’s Fujian province, they are governed by Taiwan and have been a historical flashpoint between the two countries.

“We immediately fired flares to issue warnings and to drive them away,” Maj. Gen. Chang Zone-sung of the Republic of China Army’s Kinmen Defense Command told Reuters. The same official said that it was believed the drones had been sent to gather intelligence on Taiwanese defenses on its outer islands.

According to Taiwan News, the incident marks the first time that PLA unmanned aerial vehicles have appeared over the Kinmen islands. UDN reported that the drones were flying at around 6,500 feet.

Since then, there have been reports of other PLA aircraft crossing the median line on Thursday morning. Taiwan said it scrambled fighter jets and put ground-based air defense systems on alert, a typical response to these kinds of incidents. Video footage shows PLA helicopters flying past Pingtan island, part of in Fujian province in mainland China but one of the closest points to Taiwan.

According to Taiwan’s Ministry of National Defense, today saw 22 PLA aircraft enter airspace around Taiwan, crossing the median line in the process. All these were fighter jets of the Flanker series, comprising eight J-11s, 12 Su-30s, and a pair of J-16s.

More PLA boats, too, have reportedly crossed the median line, albeit briefly, according to Taiwanese officials, who said that they were then “driven away” by vessels of the Republic of China Navy. “They sneaked in, and were driven away by us,” an official said.

There is so far little sign that Beijing is reining in its rhetoric. In one particularly belligerent example, China’s ambassador to France, Lu Shaye, stated that the Taiwanese people would be “re-educated” after any successful annexation of the island by Beijing.

We will continue to update this post to keep abreast of this fast-developing situation.

The post China Launches Missiles Over Taiwan appeared first on The Drive.