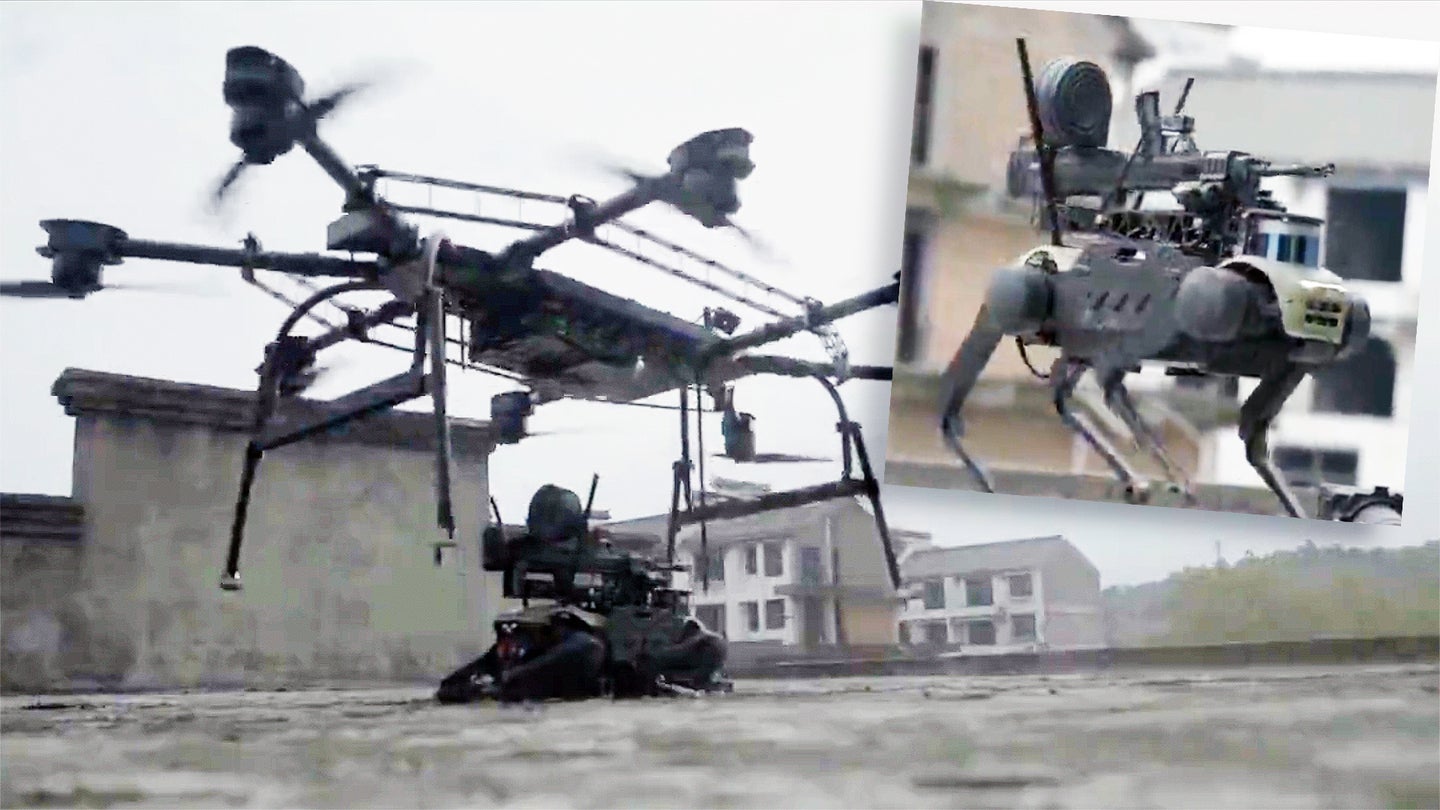 Footage of a Chinese-made drone carrying a ‘robot dog’ that is armed with a machine gun has started to make its rounds on social media, and it looks like it was taken straight out of a dystopian war movie. It isn’t immediately clear if the video was recorded as part of a Chinese military exercise or rather in an effort to demonstrate how the pairing will operate, but even without that context, the clip could serve as a foretelling of the technology that may populate future battlegrounds.

The one-minute video was originally posted yesterday to Weibo, a Chinese micro-blogging website, by a user either affiliated with or representing the local defense company that reportedly develops the drone being used to deploy the robodog.

The footage begins with a shot of the drone as it approaches the rooftop of a building in a nondescript urban area with the compact armed robot dog being carried under the drone’s frame. The drone, acting as a robotic dropship of sorts, then lands atop the roof, releases the robodog, and flies away. Shortly thereafter the robodog unfurls from its folded position and begins navigating its new surroundings with what looks to be a Chinese QBB-97 light machine gun (designated as Type 95 LGM in the United States) mounted on its back.

The Weibo account, which is verified by the platform, has the username ‘Kestrel Defense Blood-Wing’ and shared the video on the site accompanied with a description that offers limited but nonetheless additional information. The account seems to be directly affiliated with the Chinese Kestrel Defense company, also called China Kestrel Defense in some instances, although it isn’t clear what exactly ‘Blood-Wing’ is in reference to. It is important to note as well that all of the details extracted from Weibo have been machine translated from Chinese to English, meaning some terms and phrases may not be accurately communicated.

“War dogs descending from the sky, air assault, Red Wing Forward heavy-duty drones deliver combat robot dogs, which can be directly inserted into the weak link behind the enemy to launch a surprise attack or can be placed on the roof of the enemy to occupy the commanding heights to suppress firepower. And ground troops [can] conduct a three-dimensional pincer attack on the enemy in the building.”

With the added color offered by this description, it can at the very least be gathered that the drone-robodog pairing was conceptualized with the idea that it could be deployed during assault operations, especially in urban areas. Such environments are typically made up of tall buildings and complex structures that would otherwise be difficult to infiltrate, which is where it seems the company is saying this capability could be of most benefit. The Weibo account has even shared other videos of different robodogs in similar settings, suggesting that the company specializes in technologies designed with these environments in mind.

The aforementioned ‘three-dimensional pincer attack’ that the company claims the drone and robodog team could support would also be a tactic that could see employment in an urban assault scenario, as forces simultaneously attack from two directions and the robodog is dropped on the roof to add another.

Technical specifications about both the robodog and the drone in the video, which the Kestrel Defense account has dubbed a ‘Red Wing Forward heavy-duty drone,’ do not seem to be publicly available. This makes it difficult to confirm how exactly these systems operate. It’s also unclear if that’s even the drone’s actual designation, but it does, however, possess many of the same visual characteristics that an average commercial off-the-shelf drone does, and China is a known manufacturer of a slew of these types.

While everything about the video is somehow both puzzling and unnerving, one aspect that is particularly hard to ignore is the drum-magazine machine gun that equips the robodog. Despite there being no mention of the specific type of weapon in the video’s description, its general appearance is largely reminiscent of the Chinese QBB-97 light machine gun.

The 5.8x42mm QBB-97 is a companion weapon for the Chinese People’s Liberation Army QBZ-95 assault rifle, from which the QBB-97 shares about 70% of the components according to Modernfirearms.net. What primarily separates it from the assault rifle is its longer and heavier barrel fitted with a folding bipod, as well as its ability to provide sustained bursts of automatic fire.

The drum magazine seen in the video can hold up to 80 rounds, but the standard 30-round box magazine used by its assault rifle counterpart is also compatible with the machine gun variant. With the ability to fire up to 650 rounds a minute, the QBB-97 makes for a respectable albeit limited armament, but how exactly firing it from the back of a robodog would work is an entirely different story.

A video of a similar concept was released by Alexander Atamanov, an inventor and tech entrepreneur, earlier this year. Using a robot dog configured like the one seen in the Chinese video, Atamanov demonstrated its ability to fire a Russian 9x19mm PP-19-01 “Vityaz” submachine gun that had been mounted on top of it at actual targets. While the recoil certainly knocked the robodog back a few steps, it was still successful in hitting the objects targeted, even if it was from relatively close range.

It isn’t obvious if the Chinese robodog would operate in the same way under these circumstances, and it’s especially unclear how any armed robot dog would fare in actual combat. But that isn’t to say that they wouldn’t make for an interesting addition to many combat operations, especially when paired with consumer drones as delivery systems.

The option for drone deployment would not only allow operators to drop the robodog forward of their position, even in tight or high-security areas, quickly and cheaply, and do so without risking any lives, but it also adds a major element of unpredictability to a robodog’s operations, not to mention providing a new set of tools to solve tactical problems. Still, as it sits now, the robodog needs to have line-of-sight connectivity with its remote control operators, which is limiting, especially in urban environments, but leveraging existing cellular data networks is a very good way of getting around this in populated areas.

A remote-controlled drone, or an autonomous one that uses pre-programmed coordinates and a basic onboard navigation suite, could deploy an armed robodog behind enemy lines, on rooftops to take out otherwise difficult-to-access targets, to scout ahead, or even simply create a diversion. In the case of the dog on the roof, merely firing repeatedly at a closed door would cause a major distraction and would make the enemy think an attack is happening from above as well as below.

The concept becomes particularly scary if the robodogs are eventually equipped to operate autonomously, where they can search and engage targets on their own based on the parameters set by their operators. Whereas these systems are currently designed to be controlled and operated by someone, especially when armed, the potential for them to one day operate on their own accord could become a huge problem for opposing forces that would encounter them. Science fiction has already tread into these areas and it’s only a matter of time before the ‘fiction’ part becomes a reality. By delivering them via drone, packs of robodogs could wreak havoc behind enemy lines and appear in places that are too risky for soldiers to venture.

While such dark visions still may be a bit off in the future, the pairing of these two drone concepts makes a ton of sense and it certainly won’t be the last time we see it in action.

The post China Pairs Armed Robot Dogs With Drones That Can Drop Them Anywhere appeared first on The Drive.