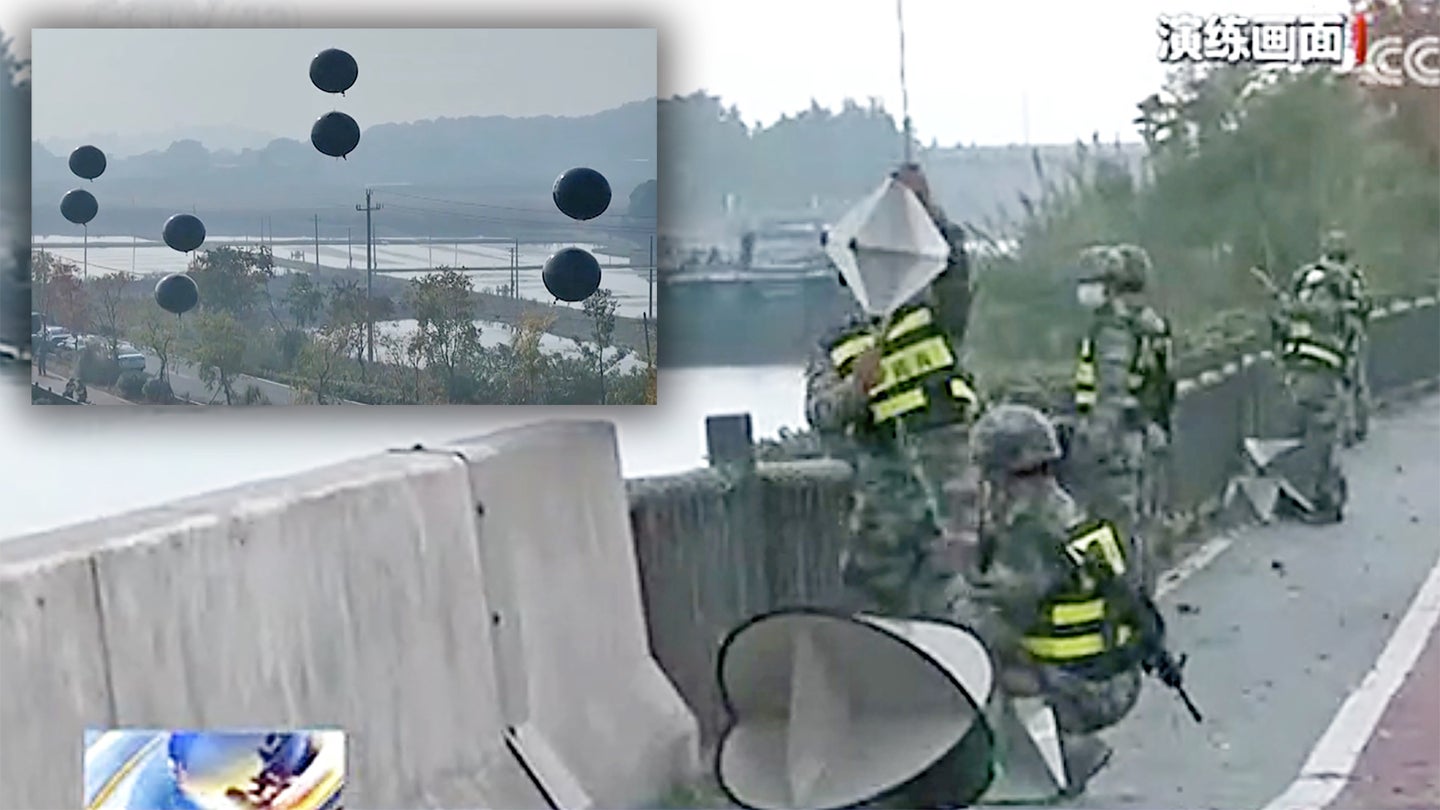 China’s People’s Liberation Army (PLA) recently held joint defensive drills with local militia units that included deploying tethered balloons with radar reflectors attached to them as a means to protect critical infrastructure from aerial attack. While the technology is certainly far less sophisticated than many modern air defense system coming out of China or elsewhere, the balloons could still potentially offer a low-cost, easy-to-deploy, passive way to help defend critical targets against specific types of incoming attacks from long-range missiles and even drones.

China’s CCTV state television station publicized on the drills during a news segment that can be viewed here. Dubbed Zhejiang Golden Shield-22, the exercises were held on November 10 and predominately focused on testing various methods to protect critical infrastructure and deal with attacks. In the footage, PLA troops can also be seen blanketing oil storage tanks in camouflage covers. Energy infrastructure is often a high-priority target during times of war, as has been exemplified in the conflict in Ukraine, requiring enhanced protection.

“The exercise focuses on the new threats and challenges brought by modern warfare to urban air defense,” read an article published by the Chinese news outlet Zhejiang News. “[The drills were designed] to explore new training methods and new ways to protect important petrochemical economic targets.”

In a brief clip during CCTV’s segment, troops can be seen raising balloons with radar reflectors attached to them. These include rhombus and circular shaped ones. It isn’t clear if the circular-shaped ones are capable of being deployed within the balloon’s envelope as well, although doing so is not a totally unique concept.

Radar reflectors of this type are unsophisticated but effective metallic devices sometimes referred to as corner reflectors. They are highly reflective to radar waves and are, in this case, intended to mask the signature of an object to confuse radar sensors, especially those used by incoming radar-guided missiles or by aircraft that use radar for targeting weapons. They could even possibly interfere with long-range synthetic aperture radar-equipped surveillance aircraft and satellites, especially when viewing at shallow slant angles from far away.

It’s possible that these balloons could also interfere with imaging infrared targeting systems that exist on some missile systems, namely cruise missile types. These systems are passive in nature, making the missiles that carry them harder to detect. They match imagery or 3D models of the target object against a database to positively identify it and make their highly precise end-game attack run. This is all done autonomously. The presence of the balloons could possibly confuse these systems, although that would likely depend on their level of capability.

Still, just how robust a shield they provide is highly questionable. China has invested heavily in understanding countermeasures to various radar-guided missiles — including radar reflectors — as of late though, so it’s unlikely this is a futile tactic. Regardless, they could augment other kinetic and non-kinetic air defense systems that take a more active role on defending key target areas and/or be used where more capable air defense systems are not available to provide protection.

We have seen similar tactics deployed by Russia in Ukraine. Radar reflector countermeasures were installed at multiple locations during the conflict — especially around critical bridges. The Kerch Strait Bridge that connects Russia with Crimea even received radar reflector-covered decoy barges that were placed nearby. The odd thing about all this though is that Ukraine has no radar-guided weapons that are built for such targets. Even their Harpoon and Neptune anti-ship missiles would have to be used untraditionally against such targets. And even if they could strike them, their actual effect on heavy bridge structures may be relatively minimal. Whatever the case, the tactic goes back many years to the Soviet Days and clearly remains in the country’s contingency playbook.

The balloons could also have a secondary, albeit limited countermeasure effect, one that is even more dated — as barrage balloons.

A barrage balloon can manifest in varying sizes and shapes, but all are meant to present hazards to low-flying aircraft. Multiple barrage balloons can also be deployed at once, tethered to each other and the ground by a net of cables, which can pose a detrimental collision risk for approaching aircraft. Overall, they make it more challenging for enemy aircraft to operate at low levels. While this is not really relevant for most modern combat aircraft — that is why the barrage balloon disappeared from service — it is potentially relevant to low flying drones.

Barrage balloons made their first appearance in World War I made of tightly woven fabric that took the shape of a sphere or a blimp. Also called a kite balloon, the device was then partly filled with hydrogen, which could make for an impressive and dangerous fireball if combat planes destroyed one. During World War II, however, barrage balloons made from vulcanized rubber and Thiokol rubber became more common. In some cases, the netting or cabling tied between them made them deadly for dive bombers and strafing aircraft even if they successfully avoided the balloon itself. As a result, the aircraft was forced to fly higher, decreasing their accuracy significantly and driving them into dense air defenses.

After WWII, however, barrage balloons quickly stopped being used on a grand scale by major militaries as advances in air combat made them far less relevant than they once were. But, the threat landscape is changing and so to are the means with which to address it.

Drones, specifically long-range ‘kamikaze’ types that reach their targets on autopilot, are a major threat to critical infrastructure and can be employed en-masse and over great ranges, something The War Zone has long warned of. The tone as to the threat presented by lower-end unmanned systems has since shifted and the discussion has changed to just how pivotal these kinds of weaponized drones will be in future high-end wars. The conflict between Russia and Ukraine has only emphasized that reality.

While barrage balloons in their heyday were certainly effective enough to deter WWI and WWII pilots, the emergence of loitering munitions, like that of Taiwan’s locally developed Chien Hsiang drone, was still far away from becoming a reality. Although, another autonomous aerial menace did exist, one that barrage balloons were notably successful in defeating, which could lend credence to their potential employment against modern-day drones.

The V-1 flying bomb was an early jet-propelled cruise missile design used by the German Luftwaffe predominately against London during WWII. Nicknamed buzz bombs or doodlebugs by the Allies, the V-1 missile was not radio-controlled and instead flew to its intended target with the help of a basic autopilot capability that used a gyroscopic guidance system and a magnetic compass to control the munition’s positioning while in flight. Once the V-1 neared its target, it would dive down toward it in a manner similar to today’s loitering munitions. In many ways, the long-range kamikaze drones of today are successors of the V-1, as are cruise missiles in a different regard.

Out of the thousands of V-1 missiles that were destroyed by various fighter aircraft and other air defense systems throughout WWII, the barrage balloons deployed over London were responsible for the neutralization of approximately 231 of these flying bombs.

Today, at the very least, they could introduce another defensive variable for low-flying drones and cruise missiles, which lack dynamic sense and avoid capabilities, to overcome. This would also have some level of deterrent value, depending on the systems available to employ against the target and their capabilities.

Whether or not these radar reflector-toting balloons are a common component of China’s air defense strategy is unclear. But the re-emergence of the balloon to defend aerial attacks is nonetheless a curious and intriguing development.