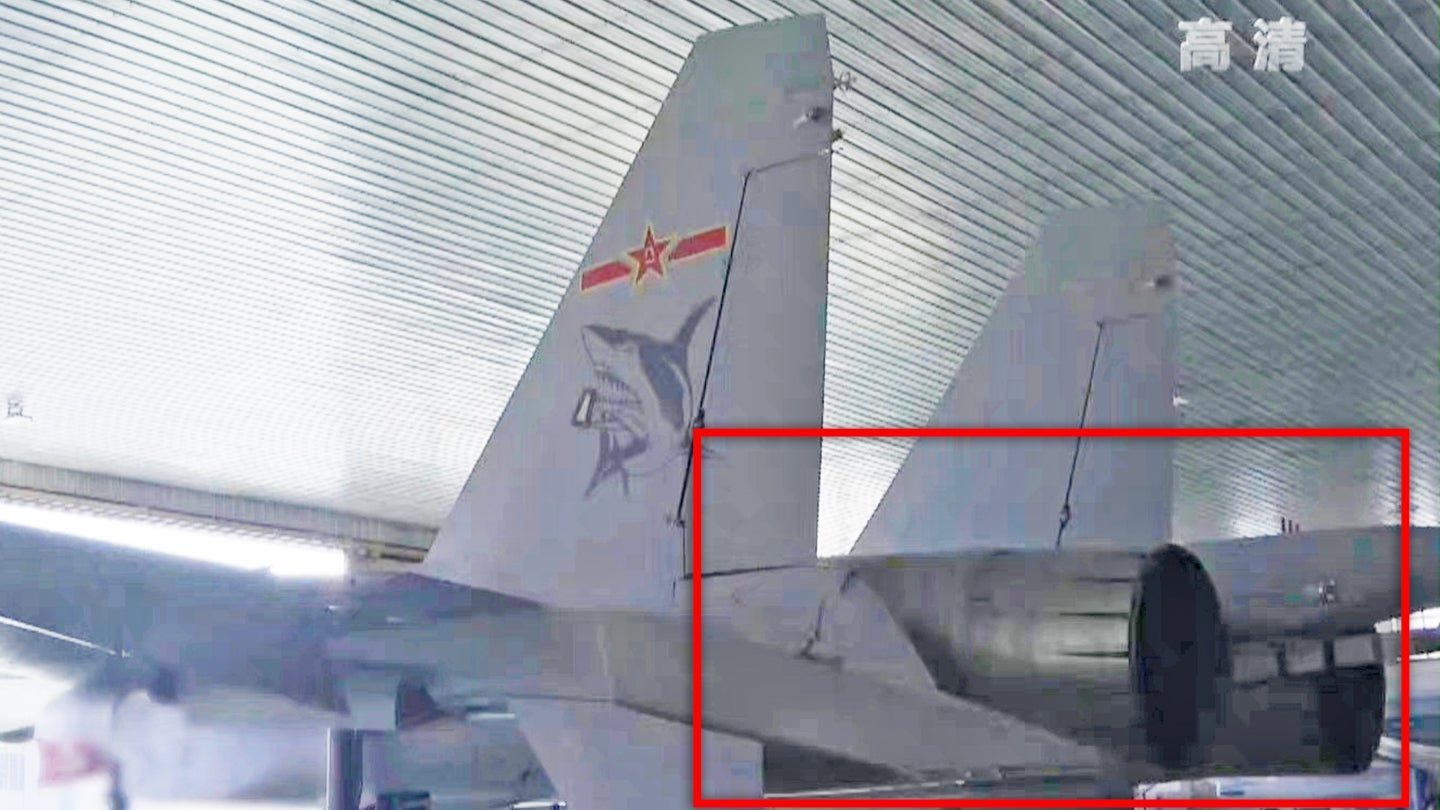 Ten years since a Chinese J-15 fighter jet performed its first landings and takeoffs aboard an aircraft carrier, an operational example of the shipborne fighter has appeared fitted with domestically produced WS-10 engines. This is a major development in the program, and for Chinese aero engines more generally, since the J-15 was the last Chinese derivative of the prolific Flanker family still to be fitted with the original Russian AL-31F engines. The move suggests full confidence in the WS-10 in the challenging naval environment and a further move away from Moscow as an engine supplier as China continues to refine and expand its multifarious ‘Sino-Flanker’ family.

The imagery in question derives from a report that was shown on the state-owned China Central Television (CCTV) channel as part of a wider update on the status of the J-15, a decade after it first went to sea for trials aboard the carrier Liaoning. The relevant sequence, in the video embedded below, begins at around the 5:58 mark.

A rear view of an operational J-15 within a hangar clearly shows that it is fitted with WS-10 engines, developed by the Shenyang-Liming company and also known as Taihang after a Chinese mountain range. Until now, the only first-generation J-15 confirmed to have been fitted with Chinese-made engines was a single prototype. This was aircraft number 554, rumored to have been used to test a navalized version of the engine, known as the WS-10H. The same jet was later re-engined with the original AL-31Fs.

The possibility that the aircraft seen in the video is a newly built airframe seems very unlikely since the much-improved J-15B is already available for production. That cannot be entirely ruled out, though, since the serial number from the jet is obscured.

Whatever the case, no operational J-15 had previously been noted with WS-10s and, as such, all of these carrier fighters that have deployed aboard People’s Liberation Army Navy (PLAN) aircraft carriers have been powered by Russian-supplied AL-31Fs.

Meanwhile, the WS-10, despite teething problems and delays, has become established as the engine of choice for other Chinese Flankers.

A single WS-10 was first fitted in a testbed J-11 fighter jet in 2001 or 2002, which retained an AL-31F in the left nacelle. Ultimately, the WS-10 became China’s first successful turbofan engine, an area in which the country has traditionally lagged behind Russian and Western developments.

From around late 2009, the WS-10 was introduced as standard on the J-11B, essentially an improved Chinese version of the original Su-27, and the same engine is included in further improved J-11D, the current status of which is unclear. From the start, the WS-10 has also been the engine used for the two-seat J-16 multi-role strike aircraft and its electronic warfare derivative.

Versions of the WS-10 also now power the in-production J-10C multi-role fighter and the J-20A stealth fighter. Development of the WS-10 continues apace, with the recent Zhuhai Airshow revealing a version of the engine with a stealthy-looking exhaust arrangement incorporating two-dimensional thrust vectoring similar to the one found on the F-22 Raptor.

The absence of Chinese engines on the J-15, therefore, has long been something of a mystery.

One explanation, although unconfirmed, is that the WS-10 needs longer to spool up to reach the same level of thrust as the Russian engine. This would be especially relevant when operating from a carrier deck, with recovery requiring near-instantaneous changes in engine power when commanded by the pilot.

Moreover, the WS-10 has suffered a string of reliability problems in the past. The first batch of J-11Bs with these engines was rejected by the People’s Liberation Army Air Force (PLAAF) and refitted with AL-31Fs.

Other issues have been related to the weight and thrust output of the WS-10, as well as difficulties in manufacturing turbine blades and overall quality control. The last two of these almost certainly contributed to reports of low reliability and a limited engine lifespan when compared with the Russian engine.

Since the WS-10 was originally developed for land-based applications it could be that the basic versions of the engine lacked the anti-corrosion protection measures required of the harsh maritime environment.

Any of these factors, or a combination, could well have persuaded the Chinese Navy to stick with the tried and tested AL-31F for its J-15s, at least until the WS-10 was proven to be fully mature or otherwise adapted for at-sea operations. Otherwise, however, the J-15 is very much a Chinese product, with locally developed radar and avionics, as well as weapons, including precision-guided air-to-surface stores that render it far more versatile than the Soviet/Russian Su-33 carrier fighter on which it was based.

Interestingly, however, the PLAN has not been entirely unwilling to at least have a handful of J-15s of other versions fitted with WS-10s, at least in an experimental capacity.

At least one example of the two-seat J-15S — the exact role of which remains unclear — has been seen fitted with WS-10s. The same engine also powers the single-seat J-15T version that appears to serve as a testbed for more advanced future derivatives of the carrier fighter, such as the J-15B, which is also capable of catapult-assisted take-off but arrested recovery (CATOBAR) operations. However, the early J-15B has actually switched back to the AL-31F, at least for the time being.

Regardless, until now, China has been unwilling to put WS-10-powered J-15s on its carriers, but the fact that a standard example of the carrier-capable fighter has had its AL-31Fs switched out in favor of the Chinese engine signals that this is almost certainly about to change. That said, the AL-31F-powered J-15 also faced criticism in some quarters on account of its alleged poor safety record, although the handful of in-service losses are not altogether surprising for a country making its first forays into carrier-based fixed-wing aviation.

Further removing the Russian engine from the Chinese Flanker ecosystem will bring other benefits. Firstly, complete AL-31Fs will no longer have to be sourced from Russia, with domestic industry fulfilling Flanker engine requirements. There have also long been questions surrounding Moscow’s willingness to continue supplying AL-31Fs to China, especially when these engines are destined to power what are, for all intents and purposes, illegal ‘clones’ of Russian Flankers. It’s notable that Beijing is only ever known to have secured a license to manufacture single-seat J-11s and all two-seaters — as well as the carrier-based J-15 — are, as far as is known, unauthorized.

The issue of Russia providing support to the Chinese AL-31Fs is likely less of a concern, with reports that China is more or less self-sufficient in this regard, not only undertaking overhauls but also a full-scale remanufacturing process. However, actually procuring new AL-31Fs from Russia may be less straightforward anyway, with significant supply chain issues as a result of sanctions as well as the requirement to prop up Russia’s own hard-pressed combat fleets.

The move to re-engine the J-15 is likely also a sign that the future of China’s first-generation carrier fighter is secure for the time being, despite work being underway on a more advanced potential successor, namely the stealthy J-35.

At one point, it had been suggested that adapting the WS-10 for naval operations might not be worthwhile, considering the relatively small production run of the J-15, which was paused around late 2017. However, manufacture of the basic J-15 had resumed by 2020, for a total of at least 65 aircraft built, and likely several more. With the first two PLAN carriers, Liaoning and Shandong, not being able to conduct catapult launches, the original J-15 is likely to remain their primary fighter equipment for the foreseeable future.

Looking further ahead, the PLAN’s carrier ambitions include the CATOBAR-capable J-15B for its third aircraft carrier, Fujian, and it seems very likely there’s an aspiration to have these aircraft powered by domestic engines, too.

All in all, re-engining the existing J-15s confirms the continued importance of this fighter as well as the growing maturity and reliability of China’s homegrown fighter engines.

The post China’s J-15 Naval Fighter Is Now Powered By Locally Made Engines appeared first on The Drive.