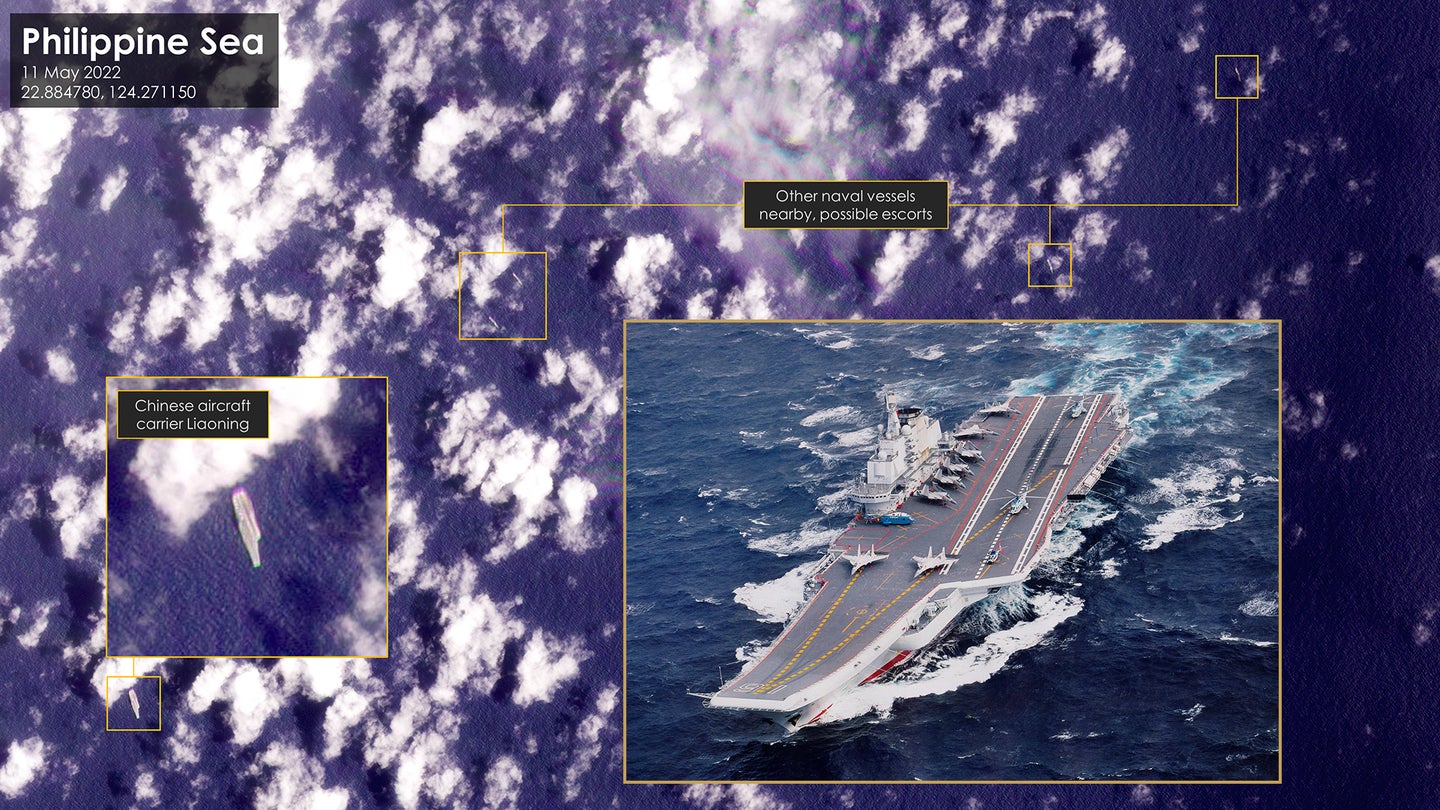 The Chinese aircraft carrier Liaoning and its escorts have spent the better part of two weeks operating in the East China Sea under the close watch of Japanese Self-Defense Forces.

Commercial satellite footage shows they likely again transited the Miyako Strait to move into waters east of Taiwan earlier this week. Detresfa_ , an image intelligence analyst and contributor for The War Zone, spotted the carrier group on Planet Labs imagery about 85 nautical miles south of Japan’s Yaeyama Islands, and 160 nautical miles east of Taiwan in the Philippine Sea.

On Friday, Janes reported a statement from Japanese Defense Minister Nobuo Kishi that Liaoning carrier aircraft flew more than 100 sorties in drills between May 3 and May 9. The drills included Shenyang J-15 fighter flights and anti-submarine warfare (ASW) operations with helicopters.

Liaoning’s carrier group appears to include the Type 055 class cruiser/destroyer Nanchang, with three Type 052D destroyers, a Type 052C destroyer, a Type 054A frigate, and an unknown Type 901 replenishment ship.

This is far from Liaoning’s first time in the Western Pacific spotlight or transiting the Miyako Strait, which separates Japan’s Ryuku and Yaeyama Islands northeast of Taiwan.

In December, the Chinese government released video and pictures of the carrier and its escorts all but sailing in formation with the Japanese aircraft carrier Izumo in waters near and southeast of the strait. You can read our coverage of the tense flattop encounter here.

April 2021 saw the Liaoning and escorts join the growing mass of warships in the South China Sea amid high tensions, sailing in close proximity to both the Theodore Roosevelt carrier strike group and the Makin Island amphibious ready group.

The Chinese carrier group will probably have lots of attention from U.S. and Japanese surveillance assets, as well as Taiwan, for the duration of its deployment. Formations like these give trained eyes insight into what Chinese carrier groups will look like and how they will operate in wartime, should it ever come to the Western Pacific.

At the same time, these operations are a reminder of how China will increasingly put Taiwan at risk from the east. With a quickly growing Navy that includes high-end amphibious capabilities as well as fixed-wing aircraft carriers, a major Chinese operation aimed at Taiwan would include total encirclement and attack vectors from every direction. With the PLAN’s third and much-improved carrier set to launch fairly soon, the threat posed by Chinese carrier strike groups, especially to Taiwan, is only set to expand markedly.