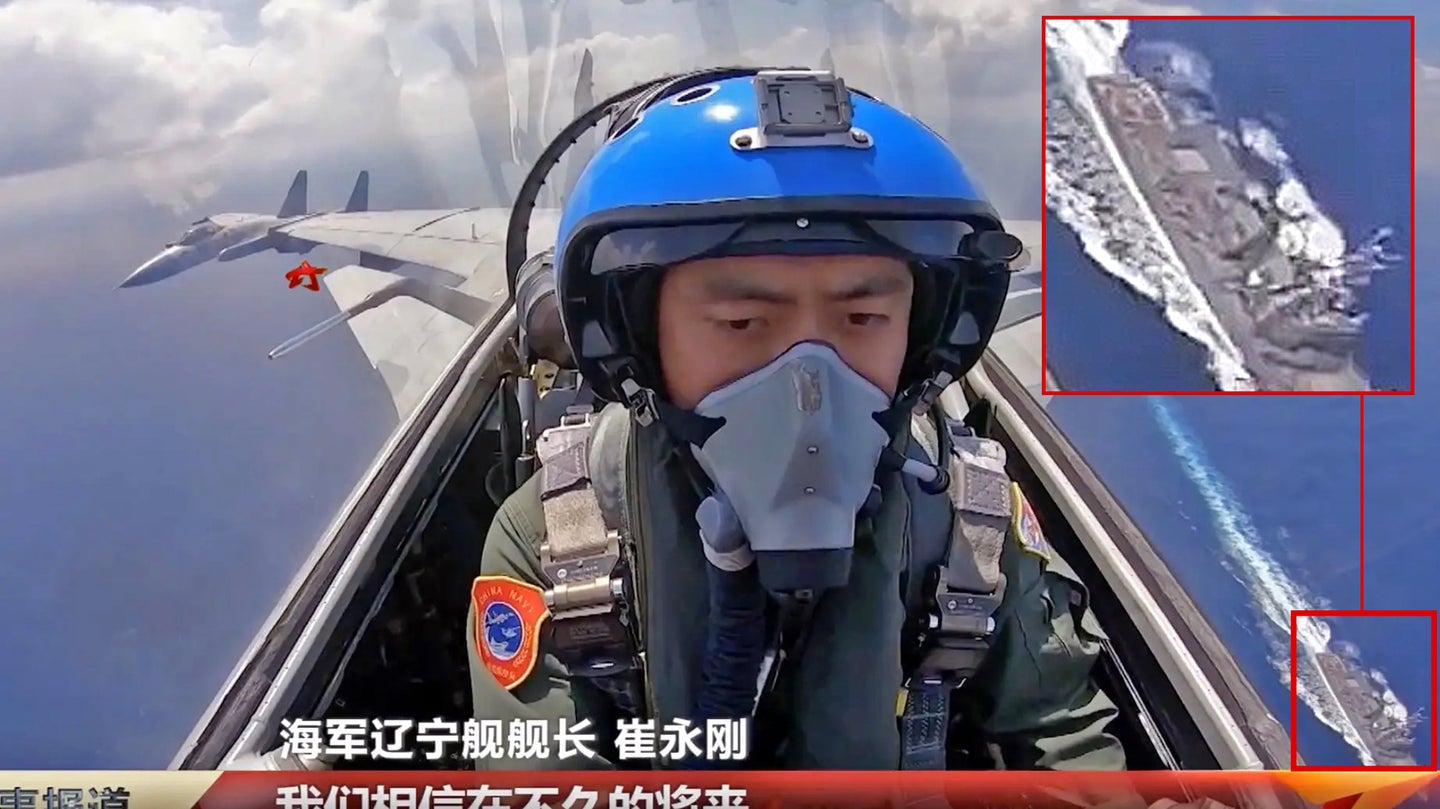 Chinese J-15 fighter jets, apparently operating from the aircraft carrier Liaoning, are seen flying over a U.S. Navy Arleigh Burke class destroyer in a video recently shown on state-run China Central Television. The footage comes soon after imagery emerged of a full complement of 24 J-15s arranged on the deck of the same carrier, and while it’s unclear when these date from, their appearance now is certainly interesting in light of the current raised tensions between China and the United States over Taiwan, as well as reflecting the increasingly routine nature of interactions between U.S. and Chinese forces in the Asia Pacific region.

It’s also unclear where the video of the J-15s overhead the unidentified U.S. Navy destroyer was taken, but there has been speculation that the incident took place in the Taiwan Strait that separates Taiwan from mainland China. While that can’t be confirmed at this stage, we have reached out to the U.S. Navy for clarification. If the footage is from the Taiwan Strait then it was likely a response to the sort of ‘show of force’ that U.S. warships have conducted here in the recent past — as well as elsewhere in the wider Asia Pacific region.

Indeed, the Taiwan Strait has been the scene of recent intense military activity by China and the U.S. and its allies. In particular, the visit to Taiwan by U.S. Speaker of the House Nancy Pelosi in early August triggered a series of military drills in the strait that continued throughout the month.

Only last week, meanwhile, the Arleigh Burke class destroyer USS Higgins (DDG-76) and the Royal Canadian Navy’s Halifax class frigate HMCS Vancouver passed through the Strait. This is only the most recent transit of the strait by a U.S. Navy warship and the J-15s were not passing over this warship, which is a Flight II vessel, identified by its hangar deck. Nevertheless, U.S. destroyers operate across the region routinely, including in the South China Sea, where they could also encounter J-15s from Liaoning.

U.S. Navy warships conducting so-called Freedom of Navigation Patrols, or FONOPs, typically draw a sharp rebuke from Chinese authorities. That was also the case back in July when three U.S. vessels — including the Arleigh Burke class destroyer USS Benfold — transited the Strait in the space of a week.

As for the Liaoning, in recent months it has been noted operating in waters further east of Taiwan. Reports and photos released by the Japan Ministry of Defense in early May showed the carrier and its air wing exercising around 100 miles south of Ishikagi Island, a Japanese island southwest of Okinawa.

More recently, satellite imagery shows that Liaoning spent a brief period at sea between September 5 and 7, before returning to port by September 8.

Wherever this latest incident took place, it was apparently in international waters where it’s not unusual for one country’s naval vessels or aircraft to shadow those of another. Currently, there is nothing to suggest one way or another that the J-15s acted in a dangerous or otherwise unprofessional way during the encounter, although that would not be the first such instance of something like that happening, based on statements from the U.S. Navy and other allies.

What the encounter does seem to show is further evidence that the carrier arm of the People’s Liberation Army Navy, or PLAN, is increasingly being used in a more active way, to monitor the movements of warships from the U.S. and other navies. There are many accounts suggesting that the primary role of the Liaoning is to develop the PLAN’s operational carrier capabilities, ahead of the service inducting its first truly home-grown carrier, the Fujian.

What’s also unclear from the short video is where the Liaoning was during the overflight of the destroyer. It’s quite possible that the U.S. warship was in turn shadowing the PLAN carrier, something that the Japan Maritime Self-Defense Force has also done in the recent past, for example. With that in mind, a flight of J-15s being sent over the destroyer is a very normal response, signaling presence and perhaps warning the vessel off attempts to approach closer to the Liaoning.

Interestingly, while it is unclear whether the J-15 from which the video was taken is carrying external weapons, at least one of the other two jets seen in the formation does appear to be carrying air-to-air missiles under its wings, although it is impossible to determine if these are live weapons or not. For combat air patrols, J-15s can carry various air-to-air missiles of primarily Chinese origin.

As it is, other recent imagery of the Liaoning, perhaps originating from this same deployment, shows — apparently for the first time — how the J-15 component of the carrier air wing is now at full strength. This imagery, which began to appear over the weekend, includes aerial views of the carrier with 24 J-15s on deck. As well as these fighter jets, the carrier is seen embarking a pair of Z-8/Z-18 series ship-borne helicopters, which fulfill a variety of roles, including anti-submarine warfare and early warning, and a single Z-9 helicopter that is typically used as a plane guard.

According to reports in the Chinese media, the sequence with 24 J-15s was shot during maneuvers in the Bohai Sea, an area of water off the east coast of China that extends into the Yellow Sea. That would put it a long way from the Taiwan Strait, but that’s not to say that the carrier wasn’t in both those locations at different times during this deployment. It’s also possible that the imagery is unconnected and was simply published within the same time period — and perhaps as a method of signaling military strength in a time of elevated tensions.

As it stands, it seems Chinese media coverage of the Liaoning has certainly stepped up of late, as the carrier marks its 10th anniversary in PLAN service, a milestone reached on September 25.

In that decade, the Liaoning and its embarked J-15s played a pioneering role in carrier aviation within the PLAN. Like the J-15, which is a Chinese-built version of the Russian Su-33 carrier fighter, the Liaoning also traces its root back to the Soviet Navy, having been built for that service as the Riga (later Varyag) being sold to China.

Only two months after commissioning, in November 2012, a J-15 performed the first landings and take-offs onboard the Liaoning. China’s second aircraft carrier, the Shandong, was commissioned in December 2019 and followed very much the same pattern as the Liaoning although it was built in China.

With more than 60 J-15s now understood to be in PLAN service, the aircraft has already far outstripped the production numbers of the Su-33. At the same time, the aircraft has introduced a true multirole capability that’s absent from the Russian equivalent and, while there has been some criticism of the aircraft’s capabilities, its development has continued to encompass a two-seat version that can conduct electronic warfare and strike missions. Work is also now underway on a version of the J-15 to operate from catapult-equipped carriers such as the Fujian and other potential flattops that might follow it.

Launched in June this year, the Fujian is also expected to include the next-generation J-35 low-observable fighter and the KJ-600 airborne early warning aircraft in its air wing. Currently, the new carrier is undergoing mooring trials, during which onboard systems are put their paces with the vessel docked in port.

Undoubtedly, Liaoning has played a key role in China realizing its ambition of becoming one of the world’s few operators of fixed-wing-capable aircraft carriers. A video sequence, albeit brief, of armed and operational J-15s buzzing a U.S. Navy warship is just one demonstration of how far the PLAN has come in a remarkably short time.

At the same time, while this kind of interaction itself appears fairly innocuous, it does still highlight how closely the PLAN and the U.S. Navy are engaging with each other at a time of particularly chilly relations between the two countries.