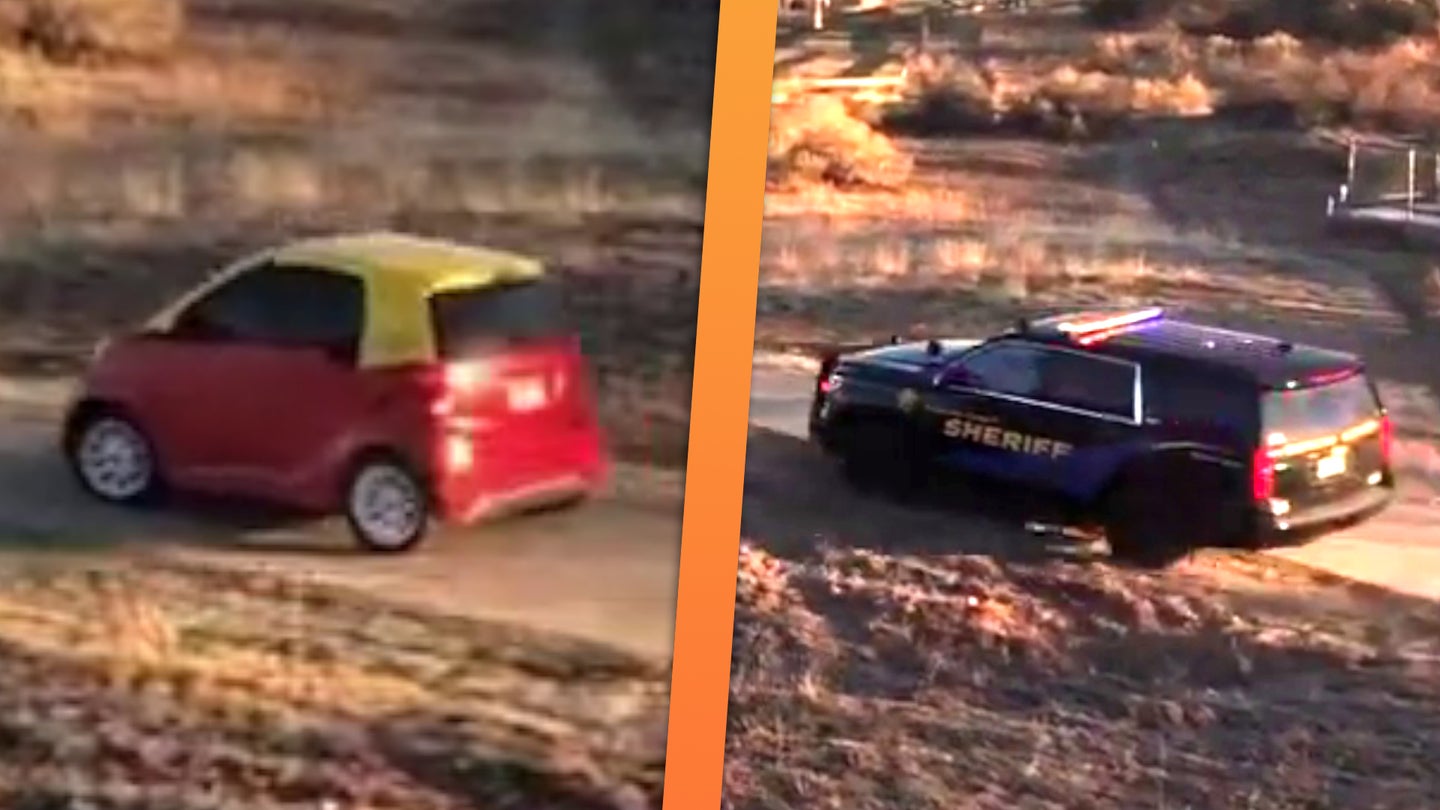 Police were spotted chasing a life-sized Cozy Coupe through a Douglas County bike path in Colorado on Saturday morning.

The vehicle in question was a Smart Fortwo. The small two-door city car was wrapped to resemble the famous Little Tikes Cozy Coupe, which in its original form is a kick-along toy for children. The stolen vehicle was the property of Colorado Tinting, a local business specializing in tints, wraps, and paint protection films.

Local resident Kelly Borchert spotted the chase as it passed by her backyard, capturing footage of the hilarious vehicle fleeing from police. The petite ForTwo is seen darting over a pedestrian bridge and through a bike path to attempt escape, with the driver likely hoping its small size would allow it to squeeze through gaps a police cruiser couldn’t follow. The ForTwo gained a healthy lead over chasing police with the move, but following cruisers were able to navigate the obstacle and keep pace.

While some have successfully fled police in Smart’s humble hatch, this thief wasn’t so lucky. Police later apprehended the suspect and recovered the vehicle, according to Borchert.

According to Mike Ellison, owner of Colorado Tinting, the ForTwo was wrapped as a fun way to help advertise his business. Speaking to The Drive, Ellison stated that the car was stolen at 5:30 a.m. on Friday morning, the day before the chase occurred.

Ellison is yet to receive the vehicle back. It’s currently being held for evidence by police, according to Ellison, and he was told the car sustained significant damage. Ellison is aware of one arrest regarding the incident, reportedly a person who broke into his workshop on Friday.

Wrapping the Smart ForTwo to emulate the Cozy Coupe is a fun and popular trope. The two-door’s simple roof lines are a solid match for the best-selling Little Tikes car, and the car’s small size often earns it comparisons to a toy, as well. It’s rare to see such a vehicle in a police chase, but it’s a weird case of life imitating art—in the form of an ancient meme with a Cozy Coupe fleeing multiple police on a highway.

Having one’s car stolen is never a good time, but Ellison is able to look on the bright side. “It is a crappy situation, but it could have been way worse. At least we got a super funny video of it,” he says.

The post Colorado Police Chase ‘Cozy Coupe’ On The Run appeared first on The Drive.