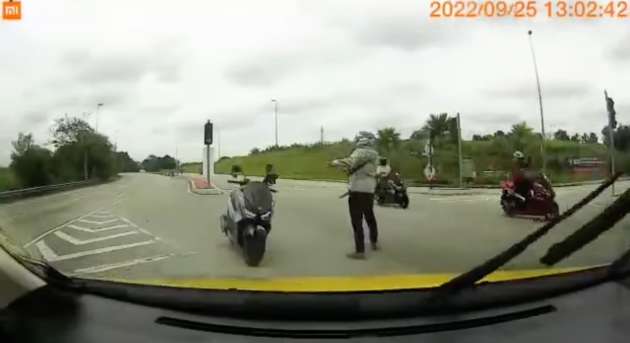 The authorities, specifically the Royal Malaysian Police (PDRM) have made it clear: marshals escorting convoy groups are not allowed to control traffic. That appears to have not stopped certain quarters from continuing to do so, attempting to give convoy members privileged passage along roads and through intersections.

Among the latest of these to surface was uploaded to the Dashcam Owners Malaysia Facebook page, where footage by Facebook user Mohd Akrie depicted a scooter convoy passing through what should be a red light in their direction, as the traffic light for the camera vehicle was green at the time.

A rider on a light grey scooter makes their way to the centre of the intersection when their direction of travel apparently still has the green light, then parks themselves next to the chevron at intersection before dismounting to direct traffic.

Several seconds pass before the light turns green for the camera vehicle, however the marshal continues to signal the scooter riders in the convoy to continue through the intersection, ignoring the change in lights and still signalling to stop the camera vehicle.

The law on this has been clear. Action can be taken against any individual or group that performs traffic control duties without the presence of traffic police under Section 21 of the Police Act 1967, or Section 79(2) of the Road Transport Act 1972. Therefore, road users are not obliged to follow the instructions of these marshals if they ask you to give way, stop at an intersection, or divert your vehicle.

That said, do not take the law into one’s own hands and put yourself in harm’s way, and take all precautions when encountering such convoy groups on the road.

The post Convoy marshal stops car with right of way at traffic lights – no such authority without police presence appeared first on Paul Tan's Automotive News.