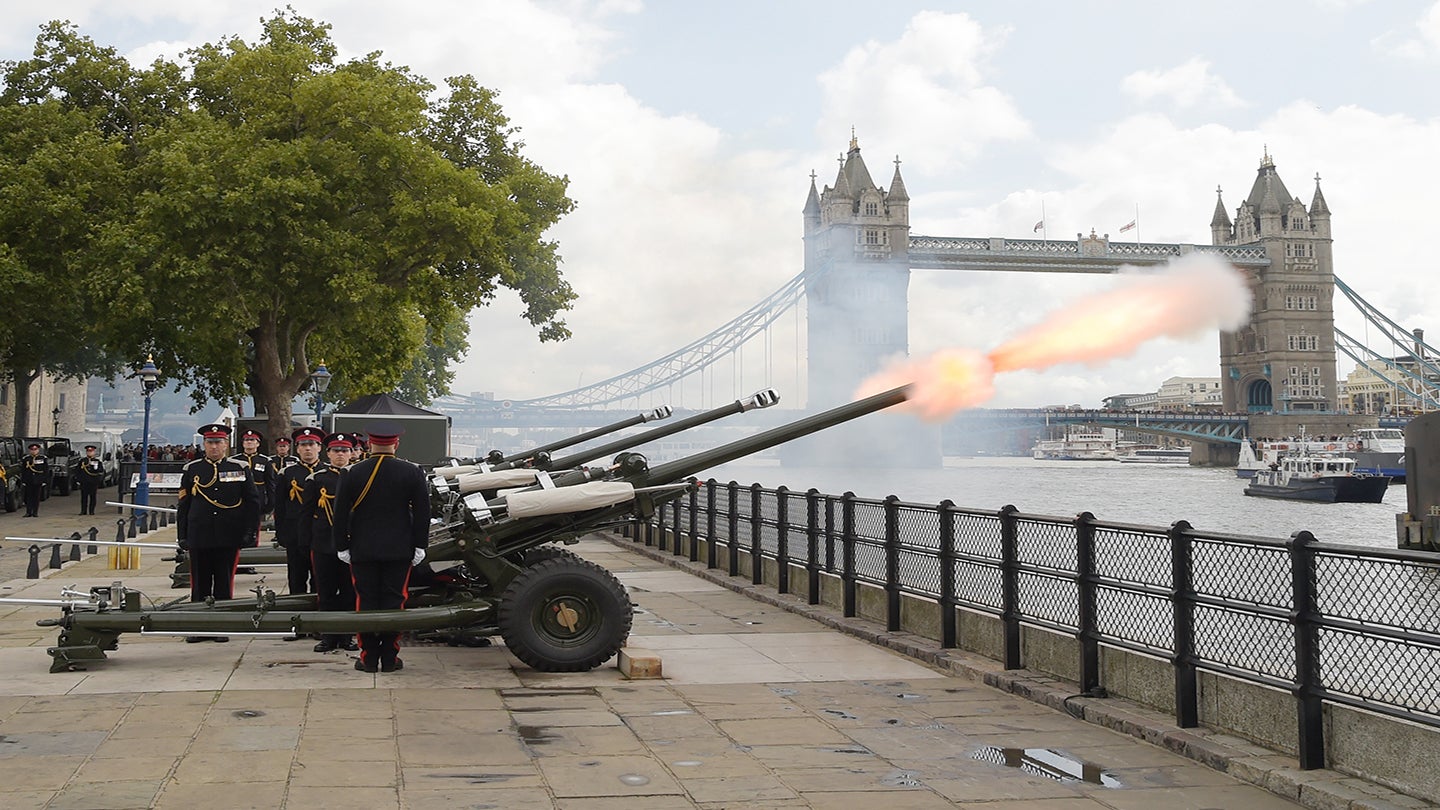 The thundering sound of artillery fire rocked London, across Great Britain and around the world today as part of a tribute to Queen Elizabeth II, who died Thursday at Balmoral Castle in Scotland.

“Death gun salutes” took place “at Hyde Park, The Tower of London, Royal Navy ships at sea and across the U.K.” at 1 p.m. London time “to commemorate the life and death of The Queen, after serving 70 years on the throne,” the British Defense Ministry (MOD) said. Each unit fired 96 rounds, one for each year of the queen’s life. One round was fired every 10 seconds.

The death gun salutes, which also took place thousands of miles away from London in Australia and New Zealand, are a vestige of the days when England ruled the seas.

“The traditional gun salute goes back to the 16th century when the ships of the Royal Navy, on entering a friendly port, would fire off all their cannons to show that they had no loaded guns and therefore, were not a threat,” British Capt. Josh Bate, an artillery officer with the 105th Regiment Royal Artillery, explained in a short video produced by the British Army.

In response, “the friendly port would then fire their guns to show that they acknowledge the salute, and also were not a threat to the ship coming in.”

That tradition, said Bate, “evolved over the last few hundred years and now it’s just a more general mark of respect, and we fire a different number of guns depending on who we’re paying our respects to. The most common salute you’ll come across is the 21-gun salute, which is reserved for members of the royal family and it’s the royal salute.”

For the queen, it was something else entirely, with artillery units firing a total of 96 shots, generally in groups of three cannons each firing 32 rounds.

Some of the artillery pieces date back to before the queen was born.

Others are far more modern and still in use.

“We use the 105-mm L-118 light gun,” said Bate, whose unit fired from both Hillsborough and Edinburgh castles. “It will look very familiar to you. It’s also the guns we use on operations and on exercise and was most recently deployed in Afghanistan. It’s exactly the same thing that we use here. And we use three of them for a gun salute.”

While today “is obviously a very sad day” it is “also a huge honor for us to be able to play our part in it and kind of represent the entire nation, as it shows the sadness of the day,” said Bate. “The Royal Regiment of Artillery is very proud to be playing our part in this sad day to provide gun salutes worthy of the occasion.”

Across the world, perhaps thousands of rounds were fired in honor of Queen Elizabeth II. Here is a look at some of those death gun salutes:

At the Tower of London, the Honourable Artillery Company (HAC) provided the firepower.

The HAC dates its origins to 1537, according to the British Ministry of Defense, “making it the oldest Regiment in the British Army. It took over the role of firing Gun Salutes from the Tower of London in 1924.”

Today, it is part of Britain’s Army Reserve.

At Hyde Park in London, thousands watched a procession of 71 horses of the King’s Troop, Royal Horse Artillery, galloped into position with 36 of the horses pulling six World War 1-era 13-pounder field guns, each weighing 1.5 tons, which were then fired.

The King’s Troop, Royal Horse Artillery is a British Army mounted ceremonial unit that fires Royal Salutes on Royal Anniversaries and State Occasions, such as state visits and royal birthdays, according to the British MOD.

“Permanently based in Woolwich, King’s Troop soldiers also have a vital operational role. They are trained as fighting soldiers first and foremost and when the Army mobilizes The King’s Troop Royal Horse Artillery provides drivers who deliver ammunition to artillery units around the battlefield.”

“The Royal Artillery provides firepower to the British Army,” according to the MOD. “It’s responsible for finding the enemy using a variety of high-tech equipment, striking them using everything from explosive shells to advanced precision rockets. The regiment has been involved in almost every battle and operation the Army has fought in its 300-year history.”

On the Channel Islands, the 104th Regiment Royal Artillery fired their cannon.

Based at Merville Barracks, Colchester, they are known as the Airborne Gunners, according to the MOD. Their core role “is to provide offensive fire support to 16 Air Assault Brigade, the British Army’s airborne rapid reaction force.”

The regiment is made up of two gun batteries equipped with the 105mm L118 Light Gun.

“While its constituent batteries can trace their history to the Napoleonic Wars, 7 Para RHA was formed in 1961 and has deployed on operations in Kuwait, Aden, Northern Ireland, the Falkland Islands, Cyprus, Bosnia, Kosovo, Sierra Leone, Macedonia, Kosovo, Iraq and Afghanistan.”

Portsmouth actually went above and beyond, firing off a 117-gun salute, 21 guns for the Sovereign plus one for each year of the queen’s life.

The death gun salute was performed by Her Majesty’s Naval Base Portsmouth, home of the surface fleet. It is the base for the Royal Navy’s two aircraft carriers (HMS Queen Elizabeth and HMS Prince of Wales), all six Type 45 destroyers as well as Type 23 frigates, the Fishery Protection Squadron, Hunt class minehunters and the 1st Patrol Boat Squadron, according to the MOD.

And many took place beyond the island nation’s shores.

Like this one in the British Overseas Territory of Gibraltar, where the Royal Gibraltar Regiment did the honors.

The Royal Gibraltar Regiment has defended Gibraltar since 1939 and has served in all major operational theatres since 1969, according to the MOD.

“Its antecedent regiments deployed to Egypt and the Sudan in the 19th century and took on the role of defending Gibraltar as the Gibraltar Defence Force at the outbreak of war in 1939.”

More recently the Regiment has deployed to Morocco to train with the Moroccan Armed Forces, and to The Gambia to prepare the Gambian UN Force. They have also supported the Royal Navy’s presence in the Middle East.

“While its members serve on operations around the world, the Regiment still fulfills its task to defend The Rock. It is responsible for all bomb disposal responsibilities in Gibraltar and is the only infantry unit in the British Army to have such a role.”

And in New Zealand as well, like this one on the Wellington waterfront, where soldiers from the 16th Field Regiment handled the honors.

The queen’s son and successor, now King Charles III, is 73. Only if he lives for another 23 years or more will Britain, and the world, see another such death gun salute again.